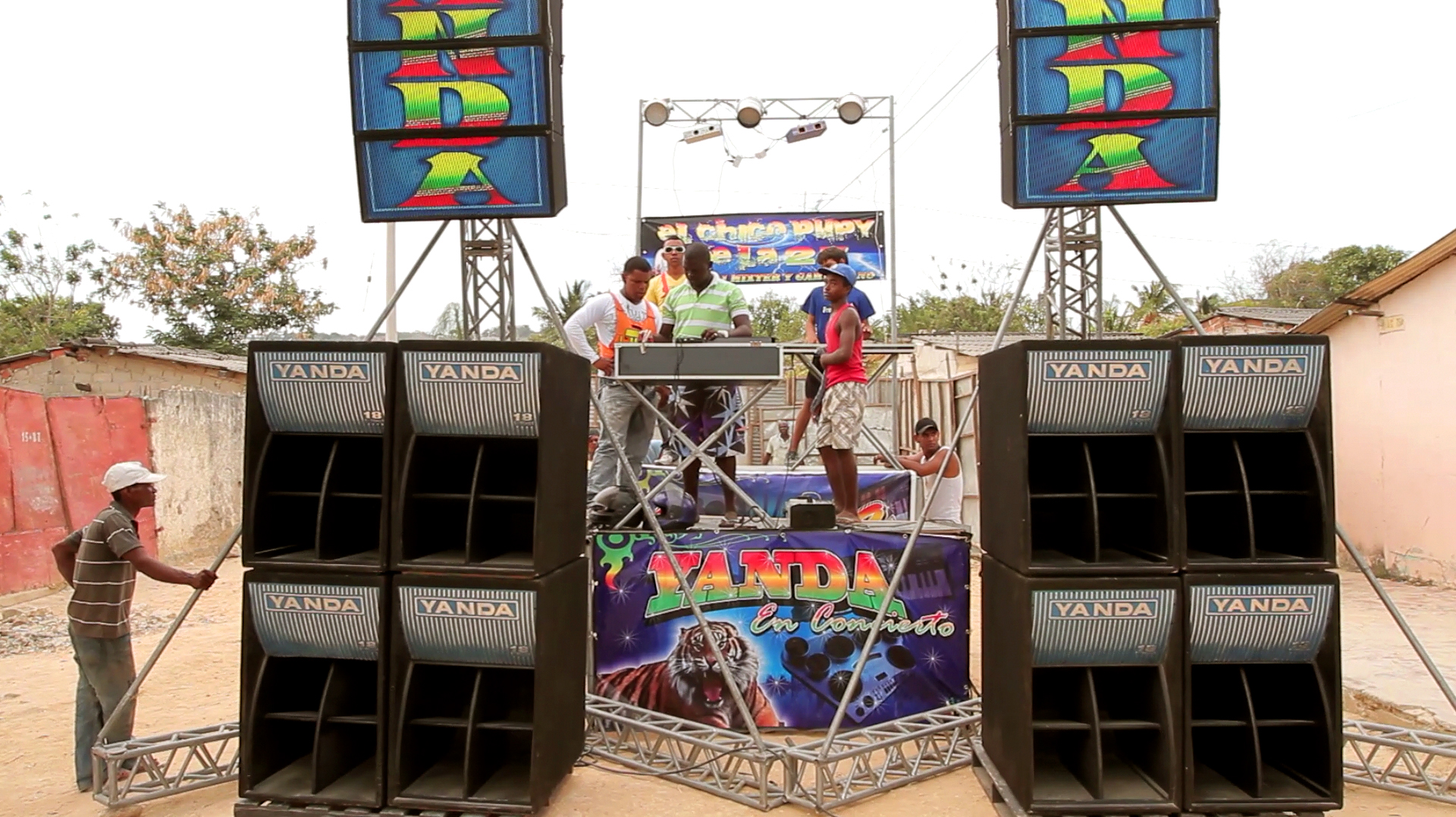 Interviews April 23, 2014
The Economics of Champeta with Michael Birnbaum Quintero

In our upcoming special Hip Deep episode “The Money Show,”  we explore the economics behind music in the African diaspora. In Chapter Two, we tell the story of  how business competition between rival DJs in Cartagena, Colombia led to the birth of champeta music.

Champeta is one of the world’s most fascinating music subcultures–a sound system culture from coastal Colombia all about playing classic '70s and '80s-style African guitar music on gigantic speakers.

This culture evolved from the '60s to the '90s despite the fact that this music was not available in Colombia, that African records were in languages that Colombians couldn’t understand, and that there was no Internet. At the time, there was barely a world music market that sold this music in the U.S. and Europe. But audiences in Cartagena were hungry for international party sounds, and they found a way.

Ethnomusicologist Michael Birnbaum Quintero describes champeta as an “economic and cultural system” rather than a genre of music. Quintero is an expert on Colombian music at Bowdoin University, and he joined us on “The Money Show” to talk about champeta as an example of how systems of exchange can create whole musical cultures. Below, read a edited version of our interview.

Let’s start with the broadest question possible–what is champeta?

Champeta is kind of a musical genre, but it’s more a system of listening to music—a set of different sound systems and their associated artists and audiences all throughout the Caribbean coast of Colombia and even into Venezuela. Champeta is primarily made up of Congolese soukous, South African mbaqanga, Trinidadian soca, Haitian music, Brazilian samba, all kinds of things are mixed in there. Pretty much anything can be champeta if it is played through a picó, as the local sound systems are called.

The craziest thing I ever heard that was under the rubric of champeta was a CD with a Hindi-language version of the 1980s ballad “I Just Died in Your Arms Tonight” by Cutting Crew. My suspicions were then confirmed that champeta is a deeply cosmopolitan music.

There’s a real contradiction in champeta music. The people who participate in champeta are people that live, for example, in houses that are built on stilts that don’t have running water, that don’t have electricity, but at the same time they are participating in this global circulation of music. These were sounds that weren’t even being heard in the cosmopolitan capitals of New York and Paris and London and Tokyo.

So, how does this cosmopolitan music culture come about in Cartagena, of all places?

One important feature of champeta is that it’s part of what’s called "the informal economy,” basically working-class poor people hustling to make a living. There’s the person who goes down the street selling avocados, there’s the person that sharpens knives, and in this case what happened was that around the time that technology became available to have home record players, people started renting them out.

So people in these working-class neighborhoods would get together some money and buy a record player or as it was called at that time a picó, borrowed from the English “pick up” because you have to pick up the needle in order for it to play. So these picós become a way for people to make money. They would rent them out for birthday parties and for anniversaries. What happened was that a lot of people realized that this could be lucrative, and the competition got heavier and heavier. As this started happening, people started doing more things to attract listeners. One thing they do is they start getting louder and bigger and they start adding all sorts of details—lights, they start painting the speakers and adding more speakers, and by the time you get into the 1970s and '80s some of these things are physically gigantic, I mean the size of a small house.

Tell me about the rise of the exclusivo.

Yes—and as all of this stuff was happening, DJs started looking for music that other DJs didn’t have and out of this came a kind of institution called el exclusivo, or a song that only one particular picó has. So if you’re able to find a song that nobody else has but is a popular song, then you are the only one that can sell it and you are the only picó that is going to get hired to do a particular dance or a particular party.

Since Cartagena is a port town, one important way to get exclusivos was to send out friends that were sailors to look for music. So as you start sending these sailors out, the sailors will go to let’s say Stern’s music store in New York City, which used to be a real institution for buying African music, or a ship that arrives in Marseille or in Paris—of course France has a large African population, so there's a lot of African music that’s available there. So people start buying up  different kinds of music that might work for a picó and just bringing back any crazy thing that they can find.

So what would often happen is that when the sailors, or corresponsales as they were called, brought back the record they’d scratch the label off so that other picós couldn’t identify what that record was. Another thing the corresponsales would do is that sometimes they would bring back three copies of the same record but only three. The first copy was perhaps pretty expensive, but the second and the third copy were even more expensive because if they sold it to the picó that bought the first copy, then that picó could guarantee its exclusivity. But, then again, they could also do an industrial espionage sort of move and sell the second or third copy of the exclusive to another picó so the picó that’s announcing itself as the picó that has the exclusivo that nobody else has, suddenly another picó could come out of the woodwork and trump them. So there’s this real kind of warfare that’s going on, an arms race where the arms in question are good records.

In your writing, you talk about champeta as an “economic system.” What does that mean?

A picó is of course a sound system and the word for a sound system in Spanish is equipo de sonido. Equipo means equipment, but equipo also means team, as in a sports team, and I think this is a fortuitous kind of double meaning. Equipo de sonido literally means sound equipment or a sound team, and a picó is really a kind of sound team. For every picó, this gigantic monumental set of speakers, there’s a lot of different people that are involved. There’s the owner, there’s the producer, there’s the DJ that actually operates the thing. There’s usually a sponsor or sponsors that pay for it or made the initial investment. You have the fans and you have other people that are associated with this equipo de sonido, it’s a real kind of network of people.

The economy of champeta is an economy of prestige. What you’re paying for when you’re buying new technological devices or exclusive records is prestige. You’re buying membership into the exclusive club of this picó, you’re buying the sensation that your picó has resources that the other picós don’t have. So money can translate to sound. If you’re the sponsor of a picó, if you’re the guy that comes from this poor neighborhood and made it big, this guy that is very important obviously for the picó, but not only in economic terms. He’s also this symbol of a local boy who made good. And he’s part of the caché not only of the picó itself, but of the whole network of people that are associated with the picó.

This translates directly into sound. When this guy goes to a dance of his picó, the first thing that the DJ does that’s operating the picó is make a sample of that person’s name and everybody starts dancing to that person's name. What this guy bought when he put the money into the making of this picó was not only an investment that was going to make a particular sort of return for him, but the experience of hundreds of people, thousands of people dancing to his name. So that is becomes a sort of mechanism for prestige.

But why prestige–why is it so important?

Prestige is important in the champeta ecosystem because these are people who in other parts of their lives don’t have power. They don’t have political power. They are the most marginalized members of society in a city that is really polarized economically and racially.

For more from Michael Birnbaum Quintero on champeta culture, make sure to listen to our full episode, “The Money Show.” Edited transcription by Briana Duggan.