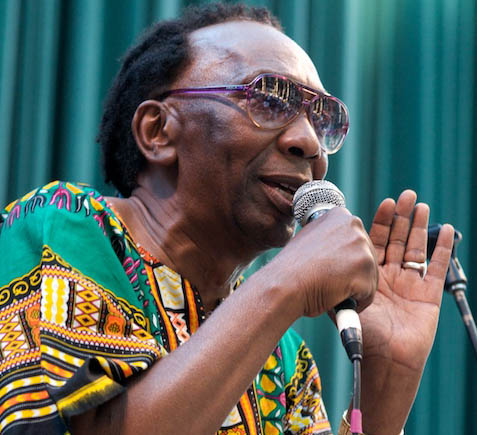 In this new series, we are trying to break down part of the barrier between listener and artist by asking some of our favorite musicians to pick four tracks from their catalogue and explain the thinking behind them.

Legendary Zimbabwe musician Thomas Mapfumo sat down with Banning Eyre in NYC last week to discuss four poignant tracks from his extensive catalogue. As the creator of chimurenga music (revolutionary struggle music), Mapfumo has been a sharp critic of Robert Mugabe and the Zimbabwe government. His music is socially and politically charged while simultaneously being intensely personal. Naturally, Mapfumo’s selections characterize his heavily socio-political subject matter that document and touch upon the struggles of Zimbabwe.

TM: It's all about what happened in Zimbabwe when the farmers had their farms taken away by the government. And in turn, the government actually brought hunger to its people. And today, you can see where we are. We are the third poorest country in the world. And yet, we used to be the great basket of Africa. That's not what we need. We need to think like grown-ups!

It's important to look after a nation and it's people. If there is a government there then they are there to help the country evolve. To make sure the people have jobs and have good housing, good roads and cars...healthcare, things like that. Right now, people are just dying.

When we back to Zimbabwe, they don't know us, they've only been told about us but they've never seen us. This is not good for the people.

TM: "No Jobs for the Youth." This alone created a lot of problem for our people because when the youth don't have jobs; what do they do? They turn into thieves. They break into cars, break into houses, steal money or rob people. Why? Because there are no jobs. You cannot blame though. They are fighting for survival. What are they going to do in a country like that? A country with no industry, where nothing is happening and everythign is standing still. That's not good enough!

Now today they got diamonds and yet they (the government) is still stealing the money from the diamonds.That money is suppose to help the country evolve and create more jobs for our people.

TM: These songs were very popular during the struggle. They are part of the history, and talk about the reserves.

(Ed. Note: These two songs are about how the 1970s liberation war has destroyed life in the rural areas--"reserves" as in "ruzevha." The song "Tozvireva Kupiko." Mapfumo contemplates who he can tell about these struggles. It’s important to understand that this war was fought for years in the countryside, largely out of sight in the early years, and these songs were part of letting urbanites know how bad things were getting. These early songs were part of the "Chimurenga singles" songs Thomas composed during the war that both encouraged the fighters in the bush, and rallied support for them in the population at large. He does not explain all this, but it's part of his legend. – Banning Eyre)

Hip Deep December 14, 2017
Thomas Mapfumo 2: The Mugabe Years
In recognition of the end of Robert Mugabe's 37-year rule in Zimbabwe, we are rebroadcasting our program on the career of Thomas Mapfumo during the Mugabe years.