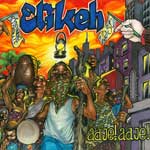 Serge “Massama” Dogo grew up in Lomé, Togo, and is the first to admit that as a young man he was completely absorbed by the rock sound. When his father invited him to play the tchimo, (a traditional Togolese lute), he asked, “Why am I going to learn a guitar with one string? What's the point?” His sole focus then was on Western music, and it was guitar he wanted to learn. Unlike many of his contemporaries, Massama never expected to be a professional musician. “I was thinking about being a soccer player or something,” he laughs, “I was not really thinking about music until I got to college.” It was at the University of Togo from 1998 to 2000 that he became President of the Orchestra. He freely concedes that this was not as glamorous as it sounds. Massama was coordinating a small guitar band and it was in this role that he began to develop his craft as a musician, learning how to organize musicians and to resolve their differences. In directing this group he learned to write music in his own unique way.

These days, Massama has a deep concern that young Africans’ absorption in Western media and music has led them to neglect and under-appreciate their own cultures. “Kids are sucked into music from the West,” he says. “If young kids in Africa are going to learn how to be involved in their own culture, governments in Africa or people who have radio stations have got to change, and use the culture of their own country to educate the kids, because this is really a big problem. I am going to give you an example: 80% of young Africans who are musicians in the US do traditional music; 80% of young musicians based in Africa want to do Western music. So, that tells you a lot. It looks like when people come here [to the US], they discover more about their own continent than when they are back home, because the media system is messing up everything.” Indeed, when Massama first came to America in 2000 and was surrounded by friends who loved African music, he realized just what he had been missing in Africa—the significance and beauty of African sounds, and of his own Togolese music.

When we in the West think about African music, we often focus on Mali. Formidable musicians and musical traditions have their roots in this country. The masterful singers Salif Keita and Oumou Sangaré are familiar even to some with little knowledge of African music. Unfortunately, this focus on Mali has left many other countries with strong musical traditions in the shadows. Massama says, “You know there are a lot of great musicians in Togo, but there is no-one known to the world. Don't get me wrong, the music in Mali is really great, but I just think its time to open the window to music from other countries in Africa and see what is going on there. Africa is huge!” Massama's aim with his current band, Elikeh, is to open a window on Togolese music.

Based in Washington DC, Elikeh has a core group of musicians. Massama covers lead vocals and guitar, and his accompanists play guitar, bass, drums, two saxes, trumpet and percussion. On first impression, you might be tempted to label the sound afrobeat – the genre formulated by Fela Anikulapo Kuti in 1970's Nigeria. That would be a mistake. The uniqueness of this music defies genres. You realize that Elikeh is not easily categorizable, and perhaps it is not meant to be. Yes, there are shades of afrobeat, highlife, and rock in the mix, but it cannot be defined or labelled as any of those genres. Massama says that each musician in the band must sound “bluesy, pentatonic and melodic; it can be jazzy, but not too jazzy; rock, but not too rock. There's a distinct feel I look for when somebody comes to the band and plays.”

Rhythm is the key component.  One Togolese rhythm central to Elikeh's sound is agbadja.  It is close to a reggae rhythm, but more uptempo.  Massama explains, “Agbadja is the type of music used mainly with drums.  The rhythm was used when the tribes were going to war, and for ceremonies.  But right now, it is used mainly for funerals.  We use it in some of our songs.”  The song “Adje, Adje” is one, and it’s the title track of Elikeh’s new CD.  “Adje, Adje, never again!” Massama chants, and even if you don't understand his language, you know to listen up.  Masama sings in Mina and Ewe, languages of Southern Togo.  He’s pointing people in the direction of his country, and urging listeners to hear and understand its music.  As with afrobeat, the brass arranging is reminiscent of James Brown’s funk in its heyday and those strong brass lines add emphasis to the lyrics.  Many of the lyrics are chanted, bringing added power and forcefulness to the message.  Massama explains, “‘Adje, Adje’ is just saying, ‘Enough is enough.’  All the good guys in Africa, the thinkers, Lumumba, you know, they were killed.  When I say in the song, 'They are coming again', people will think I am talking about multinationals, but I am also talking about the African leaders themselves.”

“Oleblemi” the second track on the CD is highly danceable. Massama leads the vocal, singing, “Cheke, cheke,” prompting a chorus to echo him, “Cheke, cheke.” Unexpectedly, a rock guitar opens up and takes the song in an entirely different direction. Massama is singing about how politicians, whether in office or opposition, are liars. But, it is the slower, more spaced out, contemplative tracks that work the best on this CD. Of note is the track “Let's March,” where a bluesy guitar announces itself and takes flight. The melody is simple and vivid, and it sticks with you.

Elikeh's website www.elikeh.com states: “The message of the songs is about justice, peace and unity.” Massama says, “It’s mainly about justice, because there's so much injustice around the world, and I think that’s the reason why there is a lot of trouble. I am going to take a specific example: you go to my country, Togo, and you see most of the people who are rich are people from a very small community and then if you are not connected to them, you cannot make it. These people are greedy; everything is for them, and meanwhile the people go hungry. So, that's a huge injustice and even the elite are controlled by the multinationals and the Western governments, so these people don't really govern the country. It’s just a huge injustice, so that's mainly what we are talking about.”

Massama sees his new CD as a beginning. In the future he feels Elikeh's message will become stronger, because he believes that injustice around the world is only getting worse. When asked if he sees music as a force for change, Massama replies, “Everyone can get on stage and be like, 'Yeah, I'm against injustice,' but you know, you gotta raise funds for kids in school who cannot buy the books. You gotta do something. So just words and singing is not enough. As a musician you must act.”