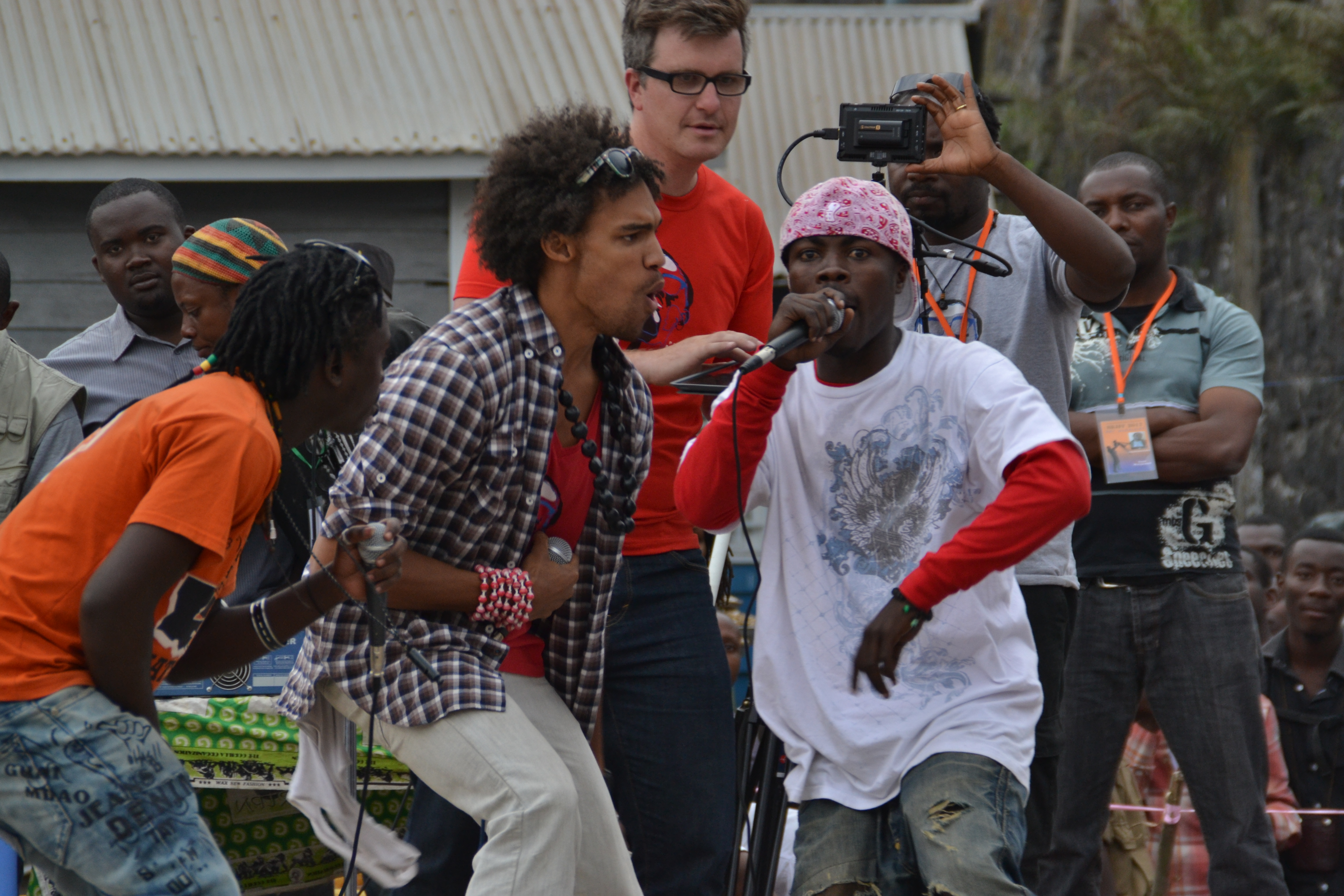 Goma, capital city of North Kivu province in the east of the Democratic Republic of Congo, is a cultural and economic crossroads at the foot of an active volcano, Nyiragongo. The people of Goma have been through a lot in the past 20 years, from devastating wars to a volcanic eruption in 2002, to the ongoing conflict over minerals, to corruption and international intervention. In our Hip Deep program, "Congo Goma: Music, Conflict and N.G.O.s," we explore how and why local musicians speak out with social and political messages, often under the influence of local and foreign activists and N.G.O.s. This is an audio-visual guide to some of the music being made in Goma.

Yolé! Africa Cultural Center, founded by Petna Ndaliko Katandolo, is an important hub of radical music, filmmaking, and other arts. Yolé! was recently featured on PBS, and you can read our interview with Petna here. Hip-hop artists, especially politically outspoken rappers, have found an encouraging home at Yolé! For example, Bin J:

This intense video was produced by students at Yolé!Africa during their annual Salaam Kivu International Film Festival in 2013. It is part of Yolé!'s Art on the Frontline Web series, which features short films telling local stories and music videos for social-justice songs produced at Yolé!, a few of which we featured in our program. Episode 1, "Mazao,"  means "You reap what you sow," in Swahili, referring to the roots of conflict in the region. You can read the full lyrics here. Another example in the same series is "Agizo Ya Lumumba," a tribute to the social-justice legacy of Patrice Lumumba, independence leader and first democratically elected prime minister of the Congo, assassinated just six months into his term by Congolese and Belgian operatives with U.S. and U.N. complicity:

Rappers and beat-makers at  Yolé! also collaborated with Beatmaking Lab. More on that in an upcoming podcast, but you can check out the results here. Not all hip-hop and rap produced in Goma has these kinds of overt social-justice messages. We also enjoyed some new sounds posted on Gomahiphop.com. The rappers on this site definitely have their ears attuned to the current sounds of U.S. hip-hop, for example "Neti SESE" from N.E.S (Negro Style Empire). MC Muhinder and Kartez also put out this sweet track:

There’s a diversity of popular styles in eastern Congo, including what locals call "Afrobeat" (sometimes known internationally as "Afrobeats" with an S). It is basically the contemporary pop sound of Nigeria that is dominating dance floors across the continent.  Here's a local example from Wanny S. King (produced by DJ Serge), "Toka":

By far the most widely recognized artist from Goma is Innoss'B. He came from a group called Maisha Soul, with his brothers, and they trained at Yolé!Africa. At age16 he won an "American Idol"-style contest organized by Vodacom, recorded with Akon and toured Europe and the U.S. Check out his winning performance of Michael Jackson's "The Way You Make Me Feel."

Then there are artists like Bismarck Bwira. He describes his own style as “tradi-modern.” It's kind of localized rumba fused with traditional rhythms and sung in the languages of smaller ethnic groups in the region, especially Kihunde.

Non-governmental organizations, from small local cultural centers to massive international N.G.O.s like UNICEF—play a big role in the arts scene of Goma, because there simply is no real local patronage. They often commission songs from local artists for their campaigns, raising awareness for everything from AIDS to child soldiers, to sexual exploitation, to voting rights. The lyrics are written in collaboration with N.G.O. workers to reflect the N.G.O.'s program, and artists are paid for this work. We explore  these relationships in the Hip Deep program.

Despite their influence, is surprisingly hard to find N.G.O.-sponsored music on the Internet, partly because these songs mostly circulate locally via radio, and some are used only to appeal to private donors. Also, some N.G.O.s sponsor songs for artists without attaching their names to the product, to make the message seem more "organic." For example:

“Nafurahi,” a Swahili-language version of Pharrell Williams’ super hit "Happy," produced by an apparently local N.G.O, Kivu Youth Entertainment, but funded by Human Rights Watch, UNICEF and others as a back-to-school initiative. You wouldn’t know that unless you look for it in the final credits.

Also an example of underhanded "organic" sponsorship, Dety Darba, one of the more successful female artists in Goma, has two songs on her recent album, "Sitaki" and "Nazangi," sponsored by  Image Africa International. Here are some other, more public examples: "Tumeamua" from a group called Goma Allstars, with Mista Poa, Bismark Bwira , Mack El Sambo, and Emmanuel Zessa for the local N.G.O. Les Hommes De Dieu:

Maisha Soul and Innoss'B have evolving relationships with various N.G.O.s, including Eastern Congo Initiative (founded by actor Ben Affleck). Here's an example of their work, with HEALAfrica. Then there's “Tushinde Pamoja,” written with local teen mothers at the initiative of two partnered N.G.O.s, HOLD/DRC and ACT for Congo who give direct financial support and education to young mothers of Congo, often victims of sexual violence.

Often, the influence of N.G.O.s is audible even on music that is not officially sponsored by one. We heard from some artists who make music with N.G.O. themes in mind, without a sponsorship agreement. For example, Gen Fuoco featuring Mistery and Evan (two white rappers with Australian accents and HEALAfrica T-Shirts on):

I would say Innoss'B's extremely odd "Steve Jobs-iJobs," an English-language tribute to Apple and Steve Jobs, is an example of how far this mentality can infiltrate the young artists in Goma: