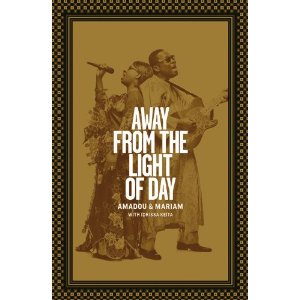 Contributor David Taylor recently sat down with the duo to find out all the exciting stuff they've been up to in their busy musical lives. You can read more from Taylor at Soul of a People.

The celebrated duo of Amadou and Mariam from Mali are a one of kind musical collaboration. Not just because of their unique, style of music but also because they’re both blind. However, since forming in the '80s, the duo have let very little get in the way of their desire to create music and bring it to the masses.

Nowadays, the duo are busier than ever. Amadou and Mariam find themselves less at home in Mali than they are on the road touring. For every one month in Mali, the two are on the road for three or four months. In addition to their rigorous tour schedule, the duo have announced plans for a series of “concerts in darkness,” to give audiences a different sense of how they experience music. If that wasn’t enough, they recently published a memoir of their youths, Away From the Light of Day, about how they both dealt with blindness from childhood, how they met at Bamako’s Institute for Blind Youths, and how they launched a career in music, with no griot family ties to pave the way. I started by talking about the book.

Amadou: The book is for understanding our lives from when we were young, what got us interested in music, and the different phases up to now. Even if you start from a point a little out of the ordinary, when you have determination you can get to do a lot of things.

People are curious about our music and it’s been well received. The book talks about how Mariam and I met at the institute and then went to Cote d’Ivoire, that Cote d’Ivoire was a platform for us, that’s where all the musicians who resisted went. The book talks of our debut in Mali, how our parents encouraged us, and how the institute of young blind people encouraged us in our marriage and way of life, and way of playing music also. The institute was where Mariam and I found each other, and began making music together. We were called Amadou and Mariam from then till now. So I think the book covers a lot of our youth.

David Taylor: In the book you explain, “In Mali, we have a sort of cousinship network, called sanangougnan in Bambara, between the clans. They are constantly teasing each other, making fun, and telling funny stories about each other.” That goes back hundreds of years to King Sundiata, of the Malian Empire. Did you find that network and those friendly rivalries helped or hurt your advancement as musicians?

Amadou: That history of ethnicities and clans did not especially help us, and it didn’t hurt us at all. When we are with the Peuls, we feel very good when the Peuls say jokingly, ‘Ah the little Bambara have come!’ ‘No,’ we say, ‘the little Peuls are here.’ That’s a facility, it very much is an easy sanangougnan. You can’t do anything bad, can’t put up a barrier. It obliges you to open a door to pass through. So it facilitates a lot overall. 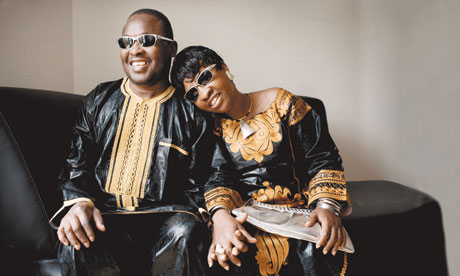 DT: In the book, the story of how your uncle pushed you to play the guitar is great. And he introduced you to Tidiani Koné of the Super Rail Band. You really didn’t play guitar before that?

Amadou: No, no. The first time it was his guitar. Otherwise I played other things – harmonica, flute – but not the guitar. His friends were Tidiani Koné, Leba Diabate. He came to the house, heard me playing the flute, harmonica and singing the songs, and said, ‘Ah, if we take this youngster to the bands, he could become a big—

Amadou: So he took me to the Orchestre National, and I learned to sing there and play the guitar.

DT: Were there stories after the book’s publication that you wish you’d included?

Amadou: Many. The book could not tell it all because that would be too long. [laughs] So that’s the first part. Maybe there will be another part for telling the rest. Because the book goes from our childhood up to our arrival in France. But from France up to now there’s a lot of things that have happened.

Mariam: Shanghai. This month, even!

Amadou: Recently we went to Haiti for the World Food Program, we were ambassadors for the food program. We visited after the earthquake to get a sense of the reality and help sensibilize people to the problem of hunger.

DT: Could you say a little about the role of griots in weddings in Mali? For example in your own.

Mariam: The role of the griot is, you send them like negotiators to convince the bride’s family. Something like: ‘Our young man wants to ask your daughter to marry him. Our young man, he’s hardworking, comes from a good family.’ Like that. So the griot says those things. It shows the family respects traditional values and they can respond to our wishes.

DT: Since your wedding, has the role of griot changed?

Amadou: In fact, you could say yes. Changed in a good sense. Because the griot does not only do those missions, they’re in ceremonies and they sing. Now there are many more griot singers –

Amadou: Now there are more who play contemporary music. It’s a bit different than before. Before, griots kept to traditional music. Now they do a little of everything.

DT: Mariam, in the book you say when you were a girl you heard French radio including songs of Johnny Hollyday. Which songs?

Mariam: There was [starts singing] ‘Pendant les vacances, essaie de ne pas m’oublier…’ [“Pendant Les Vacances,” to the tune of “All I have to do is Dream”]. Cheyla sang that. There was also Angelina. There was ‘Apres Toi,’ Mireille Mathieu sang that too [winner of 1972 Eurovision contest]. And other French songs.

DT: So the radio brought lots of music to you.

Amadou: Yes, and griot music too.

Mariam: Yes, music of Mamadou Diabate, Mana Sissoko, songs from the griots on the radio. Now there are many griots who sing.

DT: Do they have the same influence as before?

Mariam: It’s not the same.

DT: So maybe the music scene in Bamako now is more diverse—

DT: Is it still hard to work as a musician in Bamako?

Amadou: Yes. The albums don’t work, they don’t sell more cassettes, and the industry’s disc houses have declined. So now it’s the artists themselves who finance the studios and who issue cassettes. But the distribution is very much radio and TV broadcasts. Overall the sales of cassettes and CDs have dropped a lot.

Now people sell on telecharge sites and in cyber cafes, and on telephones. So, on computers, on the telephone-- it’s more complicated. We’re exploring getting the cybercafés to pay something for trying to enforce the rights of the artists. We are working a lot on this issue, to find a solution. But the music industry needs to hold a big meeting with all the actors, to see how it can start to function.

DT: Is there a concert coming up that you’re especially looking forward to?

Amadou: We have a project for a concert in the dark.

Mariam: In the dark. That starts in Manchester.

Amadou: Manchester in July this year. It’s a concert in the dark. After that we hope to do it in other cities, we’ll come here too. We’ll hold concerts in France, Netherlands and other countries. But the first edition will be in Manchester, England.

DT: What do you think people will feel?

Amadou: People will hear the voice and imagine, that’s what we want overall. People should come to know how the music happens for us, so you hear the music but you don’t see the musicians. That could give you an idea so that you too can know. It’s many things: sounds, noises, smells, and there’s the music. All these things go together to make a big concert.

DT: Do you encourage your children in music?

Amadou: Our son, yes. Our second boy, he does rap, he plays, and he has a band that tours. So that works. [laughs] We don’t do rap but we like rap too.

DT: Will you do a concert in the dark here in New York?

DT: Anything else about that or the book?

Amadou: The book for us is a way to give hope to young blind people so they can decide that being blind you can still get to do something. It shows that with our situation we need to have a bit of courage, but we’re not discouraged at all… As for music, too, it means that when you get to a point, you can play a little everywhere. That’s a very important part of the book.

We’ve recorded a new album that will come out at the end of this year or early 2012. The album was recorded in New York and Bamako, and part in Paris. We hope it gets a good launch.

The concerts we’re doing now, we’re putting in some of the new songs, to play them so people know them when they come out.