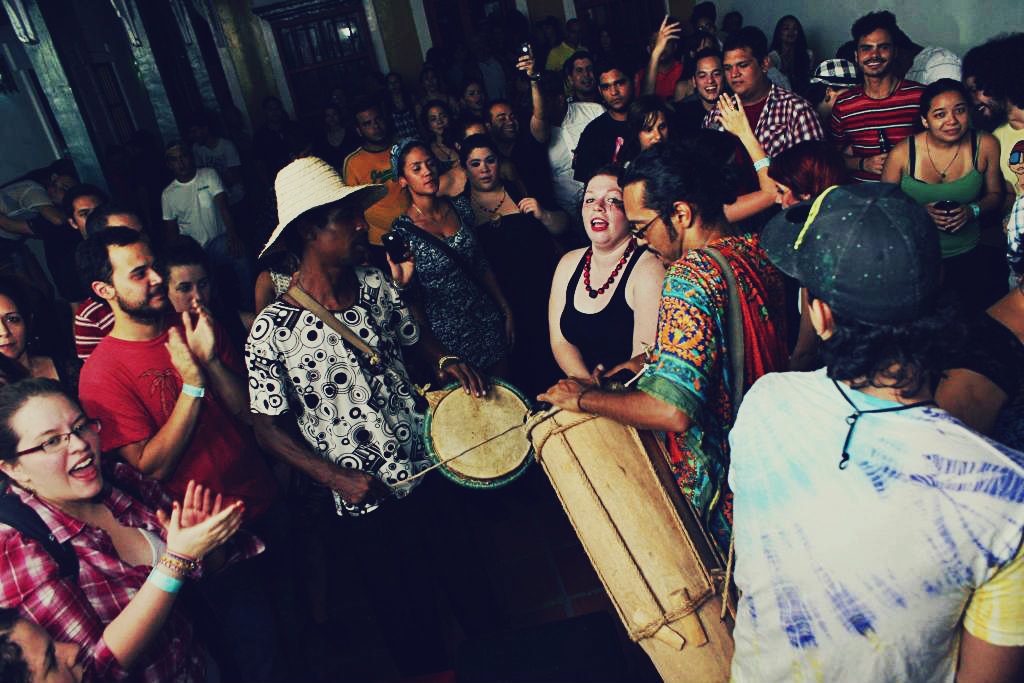 A couple of weeks ago we stumbled upon a relatively-unknown musical gem from Venezuela called the La Gallera Social Club. The group effortlessly ties together folkloric elements of Venezuela's musical past and contemporary styles, creating a well-crafted sound that is hypnotic, engaging, and gorgeous.

Unfortunately, there wasn't much about them on the web. All we found was an album, some remixes, and a great music video. Naturally, our interest was piqued and we sought out members Miguel Romero, Alexis Romero, and Carlos Guillén to learn more.

Luckily, with some effort, we tracked down the group and spoke with them via Skype. They chatted with us about their unique Venezuelan sound, their vision, and their desire to take their music beyond the borders of their country.

Julia Chanin: Thank you guys so much for speaking with Afropop Worldwide. Could you just start by introducing yourselves, your band, and the new album?

La Gallera Social Club: I am Alexis Romero. I play guitar and sing in La Gallera Social Club. Next to me is Miguel Romero, and he sings and plays the bass. Both of us wrote the songs and produced the album called Ecos del Tercer Mundo Vol. 1. We have another partner named Carlos Guillén. Like us, he sings, plays the drums, and does some programming. 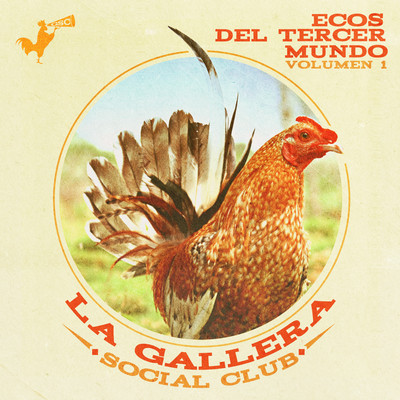 Julia: What are your musical backgrounds? I know that you are producers and musicians-what is your instrumentation?

La Gallera Social Club: In fact we are all of those things. Here in Venezuela, you have to do it all. Because you are by yourself if you want to have a band, play parties, and send a message.
So we are musicians, we are producers, we are DJs, and we are our own managers. But our background was in a band called Mango Funk. We played in this band for 10 or 12 years. We played all over the country. We composed and learned how to work in the studio. But in this project, La Gallera Social Club, we have all the control. We decide how and what to record. This is the project that we want to show the world because it is a commitment to our culture, our history, and our identity.

Julia: So your recording company, Konn Recordings, describes your music as being full of “Venezuelan folklore, psychedelia, and the Creole atmosphere.” Can you talk about your vision for the group and the music: your musical influences, the style, and your inspirations?

We worked with that, and with other musical influences from around the world, like electronic music, Balkan music, folk, and rock. So now we are trying to do something with our folk music, and of course other influences that we love. The psychedelic part comes because we are really connected to the music of the 60s—the sound of the rock from the 60s and 70s. We can’t help it. We love the Beatles and many other bands from the psychedelic movement. We just can’t stay away from that sound.

Julia: Could you talk a little about the Remezclas album? What DJs did you partner with? And why did you decide to make your songs very much electronic? 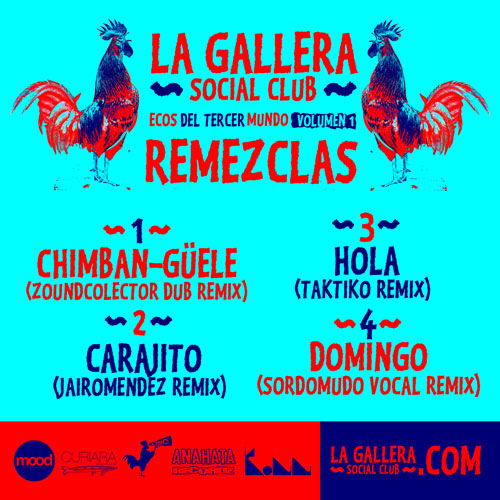 La Gallera Social Club: When the album came out and was playing in the streets, we heard a bunch of DJs sample our songs in clubs here is Maracaibo and in other cities in Venezuela. So we wanted to give a little more and work with some friends that are doing the same as us. They are working with folk and roots elements of Venezuela. But they are working within a more defined genre of electronic music. We thought it would be interesting to work with the dubsteb and the ghettotech that these DJs worked with, and to mix it with our folk style. So we made the Remezclas album first because these DJs are friends of ours, and second because they provided another way of envisioning the music. There are a lot of ways to interpret everything around us here in Venezuela. If you come to Venezuela you will see that it is a place of culture--it is full of color, full of people from all over the world, and so we are always interested in what people are really thinking and how they are interpreting what’s going on around them. So we love to work with other musicians and artists; in this case… working with DJs.

Julia: So, let’s return to your first album, Ecos Del Tercer Mundo. Is it the first album you guys made together?

La Gallera Social Club: Yes, it is the first album with this project.

Julia: And can you talk a little bit about the title: Ecos del Tercer Mundo or (Echoes of the Third World)?

La Gallera Social Club: It is a little bit of hypocrisy, a little bit of irony, because for us there is no “Third World.” Who said there was a "Third World"? It’s true that we are not as developed, industrially, as other countries. But spiritually, philosophically, in terms of the way we live our lives, we have nothing to envy about “First World” countries. So we have tried to make a joke with it, with “Third World” and “Echoes.” At first we thought about naming it "Sounds of the Third World." But at the end, we wanted it to have more of an impact, so we said “Echoes,” because we are far away. And of course because we want to enter into other musical markets. And it is true, there are echoes all over the album. You can hear the echoes from the Ebne indigenous people, from Indians, from Afro-Venezuelan people, from people all over the country, of all different statuses. 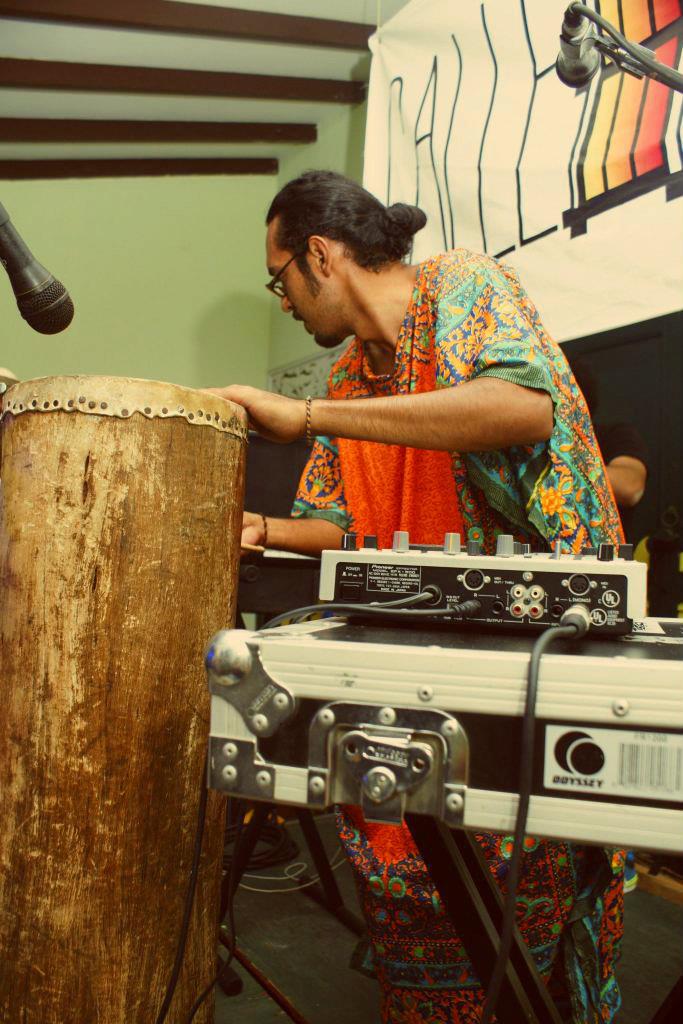 But this album is completely homemade—three producers working in our rooms. There are two songs from each of us. We decided to take a trip together by combining our sounds.

Julia: So what was your process exactly? Once one of you wrote a song, would you each contribute your own ideas to it?

La Gallera Social Club: We started individually. Everyone was making his own music in his own house. We didn’t think we’d be working together. But when we heard each other’s music (for example, when I was in Carlos’ room, and he showed me his tracks) we realized that we were all doing the same thing. So we thought, “why don’t we combine powers and work together... and conquer the world?”

Julia: We love the music video for “Chimban-güele.” What was the concept? Where was it shot? Who are the people featured?

La Gallera Social Club: La Gallera is an audiovisual experience. We want to compliment what we hear with what we are looking at. So we wanted to show the rawness of Venezuela. A lot of people know about Venezuela, but only the beaches, the beauty.  They don’t know the flea market—the way most people live and the kind of environment that most people live in. It’s filmed in downtown Maracaibo, the city where we live. Here the downtown is a poorer area, but it is really full of color and life. Everyone is in the streets… happy. So we wanted to show that. We worked with producers and directors from Maracaibo.

We didn’t want to be the lead parts in the video, so we are only in a few seconds of the video. The lead in the video, the little guy, is a Maracucho (from Maracaibo). He works in the theatre. He is really sweet; we love him. Everyone else in the video is local--they are people we found on the streets in the market. Because, of course, everyone is open to that kind of stuff here. But he is the guy we focus on in the video.

Julia: What are your plans for the future? Is there a chance that we’ll get to see you in the U.S. soon?

La Gallera Social Club: Yes, we would love to. In two weeks we are going to France, and then we are playing in Spain in the festival Chico Tropico in Madrid. And next year we would love to go to the United States. Right now it’s a lot of work for us to do everything for ourselves. But of course we really want to go the U.S. We hope to go next year. We’re going to Colombia in February, so we hope to go the U.S. after that.
We have a plan: we’re going to steal a bank, then come to the U.S.! 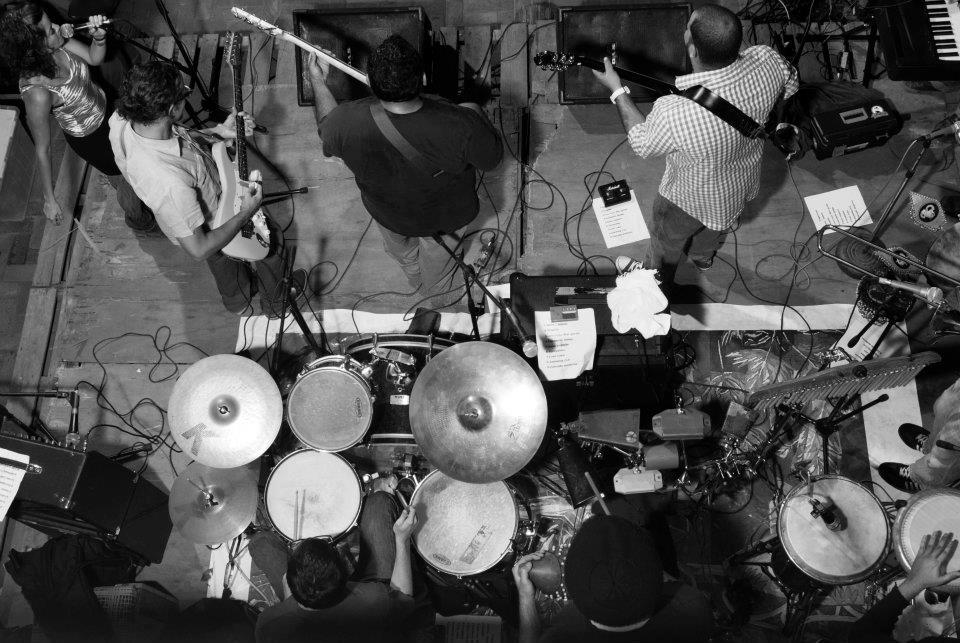