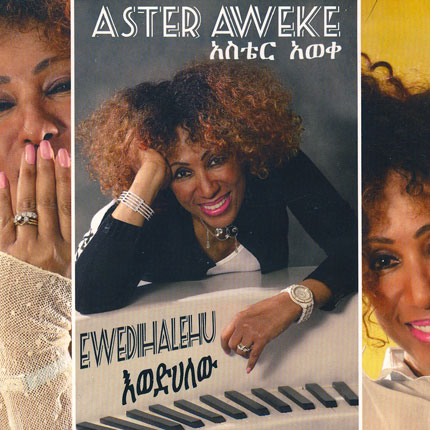 With her 24th album release, Aster Aweke proves she’s still the queen of Ethiopian pop. Savvy African music fans got an introduction to Aweke’s spectacular voice and stage presence during the late 1980s and early ‘90s when she first came to live in the United States. Today she is a superstar, not only in Ethiopia—where this album was recorded with legendary producer Abegasu Shiota—but throughout Ethiopia’s far flung diaspora around the world.

Aweke deals mostly in ebullient dance floor pop, some using the distinctive, fast triplets of the traditional tchik-tchik-ka rhythm (“Wuha Wuha,” “Ayaya”), others hewing to a more familiar four-on-the-floor groove (“Sendelela,” “Aye Sew”). Aweke is also a masterful ballad singer, as on the luminous “Hid Demo,” where she showcases her depth and control, popping precise high notes in amid breathy, floating melodies. No matter what the style or tempo, Aweke’s voice is the thing: supple, effortless, strong and beautiful, whether fluttering with heartbreak or belting with joy.

In terms of musical style, there’s not a lot of new ground broken in these 12 tracks. “Zakare” offers spare, minimal accompaniment and the concluding track, “Hulun Yemitiwed,” is essentially a cappella, Aweke’s voice backed only by a light keyboard wash. The title track, which translates “I Love You,” is a sensuous pop song marrying a synth-pop vibe with those signature Ethiopian triplets—very catchy. The upbeat tracks that make up most of this release tend to the sunnier side of Ethio-pop.  Just one, “Awdamet,” uses the dark modality that lends such ominous portent so many electrifying Ethio-jazz classics, and some of Aweke’s most trenchant songs of the past as well. On “Awdamet,” we also get ululation, big brass (some of it actually emerging from a keyboard), and a lashing groove that all lift Aweke’s voice to a truly sublime level on what may be this album’s most thrilling track.

They call Aweke “Africa’s Aretha Franklin,” and the tag works because she continues to bring such soulfulness—really, flat out soul—and vocal power to music that is still thoroughly Ethiopian.

Aweke is touring to support this release in February 2014, including a stop at New York’s Gramercy Theatre on Saturday, February 15.