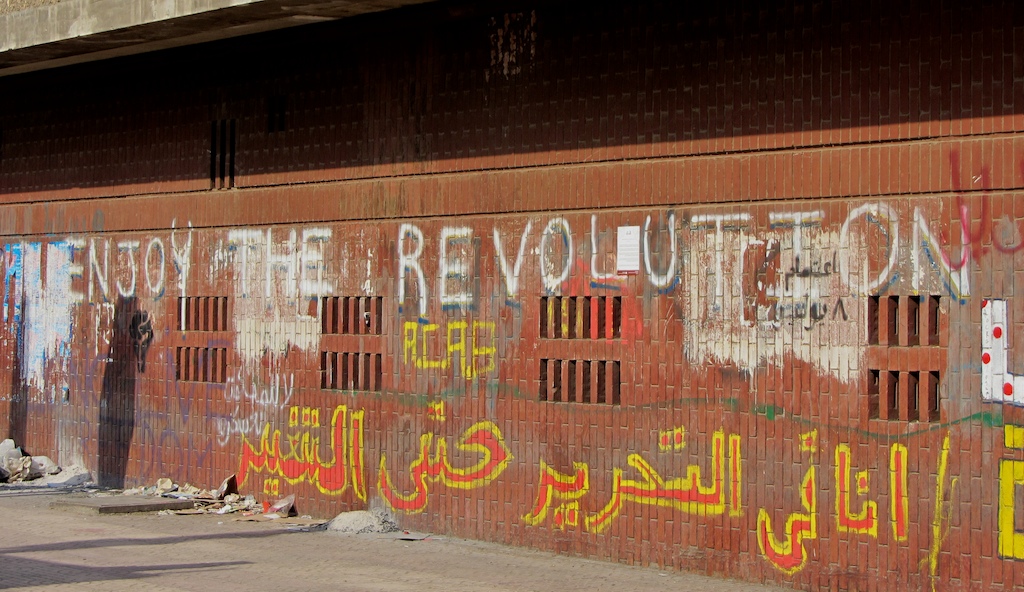 On July 8, protesters in Cairo reoccupied Tahrir Square in order to put pressure on Egypt's military rulers, and keep the January 25 revolution on track. The tactic quickly produced meaningful results in the form of concessions from the military. Sean and I arrived in Cairo during this time, and we went to Tahrir on a Friday night (July 22), and met our Hip Deep adviser Kristina Nelson. "This is the Friday of Decision," she told us as we strolled among the tents, stages and banners that summer night. "The Prime Minister gave a very conciliatory speech yesterday in which he announced the reshuffling of the cabinet. And he's setting up a commission to look at corruption. Also, they're going to start studying lifting the Emergency Law, which is something that was requested from the very beginning." 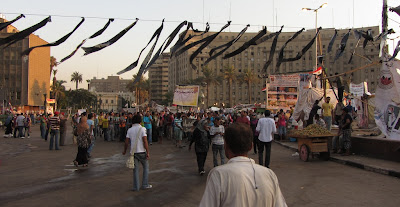 We had visited the square a few days earlier to interview Ramy Essam, an Egyptian folk singer who made an international name for himself by singing in Tahrir during the January actions. Ramy suffered brutal torture at the hands of Egyptian police shortly before Mubarak stepped down. But by the time we met him, Ramy was on his way to perform at the Barbican Center in London, and the only police in evidence in Cairo were white-uniformed traffic cops (doing their best against heavy odds!). The blue-uniformed regulars had essentially gone into hiding, for fear of facing the protesters who had roundly defeated them during the heavy clashes in which Mubarak's fate, and Egypt's, was unexpectedly altered. Protesters were now handling their own security at Tahrir. We had to show passports to gain entrance, but once inside, the atmosphere was relaxed and friendly.

On the night we met Kristina, the draw at Tahrir was a concert by one of Egypt's most revered Sufi singers, Sheikh Ahmad Al-Tuni. Various political parties had set up stages and there were speeches rallying small crowds. The Nasserite party had a lively following at their stage next to Kentucky Fried Chicken--famous for its role as a makeshift hospital during the police assaults on protesters in January. What was striking now was the cool, easy vibe. Al-Tuni sang beautifully. Vendors sold flags, t-shirts, coffee, trinkets. People chalked and painted slogans on the ground and concrete walls. One read "Enjoy the Revolution." In all, this felt more like a street fair than the scene of a bloody and fateful people's uprising.

"I think a lot of people are really down on that aspect," said Kristina, "that so soon after the revolution, it could turn into a fair. And there were actually some hostilities between all the vendors and the people occupying the square. They tried to get them to leave so it could be a more serious thing. But it all draws people in. And people hear the speeches." 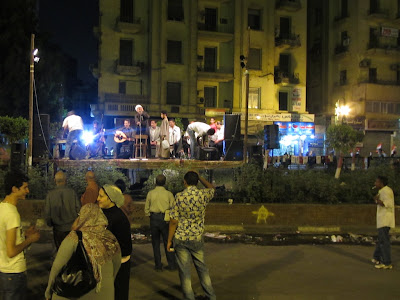 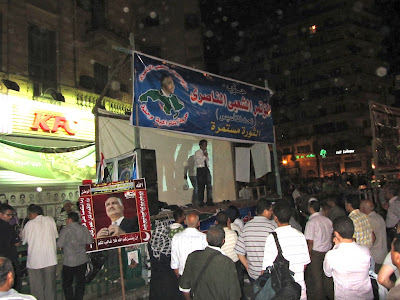 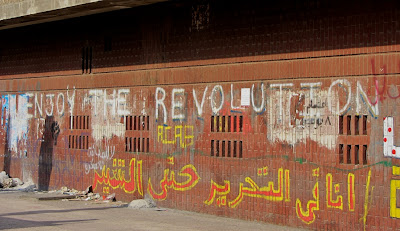 As the July re-occupation continued, and Ramadan approached, one heard more and more complaint about the protesters. People wondered who they really were. Taxi drivers griped about the fact that you couldn't drive through one of Cairo's busiest traffic circles. Few regular Caireans seemed to feel much gratitude for the tangible results the protesters had achieved. And then came July 29 with its breath-taking action by the Muslim Brotherhood and their ultra-conservative, Saudi-backed cohorts, the Salafists. This demonstration was preceded by much negotiating between the Islamists and those occupying the square. Together, they would attempt to show unity, and focus upon demands on which all parties agreed, such as more transparent and fair trials, and hasty prosecution of Mubarak and his top men. But when the famously well-organized Muslim Brothers appeared, they came in their thousands, on buses from far beyond Cairo, and television viewers around the world were treated to angry speeches from Tahrir demanding Sharia law, and other measures not part of the "unity" agreement. Some supporters of the revolution were disheartened, even chilled, by the July 29 demonstration. "Downtown Cairo looked like Afghanistan," one friend remarked wryly. Sean and I were advised not to go to Tahrir that day. But when the protest ended as planned at 6PM, we did go to the Kasr el Nil, one of the main bridges leading away from the square. We stood among streams of Brothers as they made their way to awaiting buses. We got some curious looks, but no one bothered us. There was a surprising sense of calm, no hint of the anger we had watched on television in our hotel, just hours earlier. 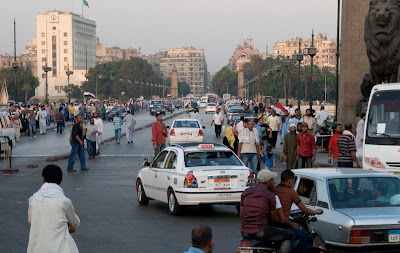 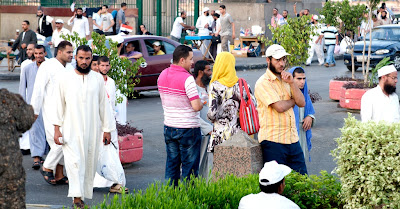 I went back to Tahrir Square the next day. A young guy called Tiger came along to help me translate. He was more used to accompanying tourists to the Pyramids, but given that there were no tourists around, he was happy to help me. Tiger had attended the Brothers' demonstration with mixed feelings. He was unhappy with the confusion of religion and politics, but he still felt a kinship with the demonstrators. They were "not bad people." I wanted to talk with long-term occupants of the square about the music of the revolution. As it turned out, Tiger himself had one of the best stories. He had been in Tahrir during the initial occupation in January. "Actually," he said, "the music, it was the start of the revolution, to be honest. Like it start with Mohamed Mounir, that song 'Hadouta Masraya,' which means 'A Story of Egypt.' It started with a small group and this song, and I joined them, and after we finished the song, it start the revolution, from that second." This and other conversations I had that day will figure into the first Hip Deep in Egypt broadcast, "Cairo Soundscape," which will debut on the weekend of October 7-9. What none of us foresaw then is that the political and cultural street carnival Tahrir had become was about to end abruptly. On the eve of Ramadan, July 31, the hated blue-clad police reappeared in force, protected by military men in tanks. They gathered around Tahrir early on Sunday morning, and swept in mercilessly, tearing down tents and banners, washing away slogans, chasing off campers and vendors. The next time I saw the square, it was unrecognizable. Police with helmets and shields ringed the central circle, and traffic moved through unimpeded by anything other than its own density. 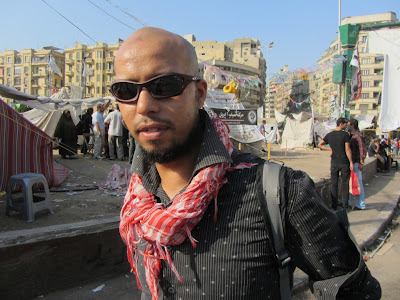 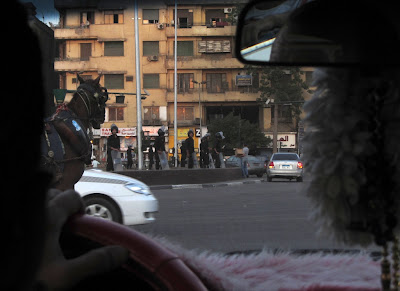 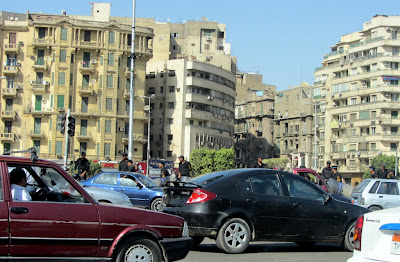 During our remaining time in Cairo, there was talk of a million-person demonstration of Sufis and others to counter the extremist message of July 29. But the military and police prevented this from happening. A small concert did take place one night in Tahrir, but it was reportedly tense, and lightly attended. Larger actions were held off until after Ramadan. Then, as was reported around the world, a big "Correcting the Path" Tahrir demonstration on September 9 devolved into an attack on the Israeli Embassy, fueled by soccer hooligans, and apparently tolerated by the military as a useful distraction from the original purpose of the protest. None of this bodes well. Of course, the lasting conclusion of Egypt's revolution remains to be written, and there is no doubt that Tahrir, the movement's spiritual center, will see many more phases and actions. For those wishing follow events from the perspective of a long-time revolutionary, I highly recommend the blog Rantings of a Sandmonkey, one of the most thoughtful and well-informed sources on how things look from the point of view of those who put Egypt's historic revolution into play in the first place. 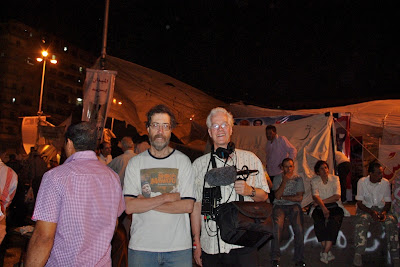 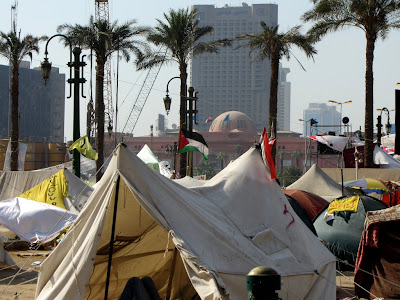 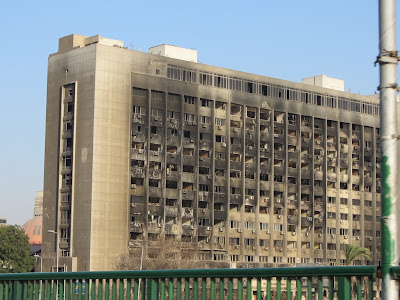 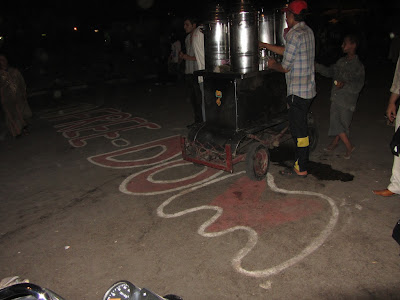