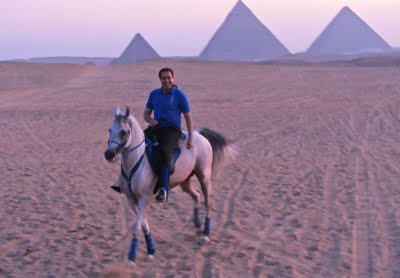 The weeks before Ramadan, which starts on August 1 this year, are packed with weddings in much of the Muslim world, and Cairo is no exception.  On Sunday night, we met up with the king of Egyptian sha'bi music, Hakim, and tagged along while he sang at two such events.  This is a well-oiled routine.  All the PA equipment is set up in advance, and the band simply moves with their instruments, arriving just in time to perform at each location.  Hakim told us he recently performed at four weddings in one night, finishing just before 6AM.  So this was a relatively light night of work. 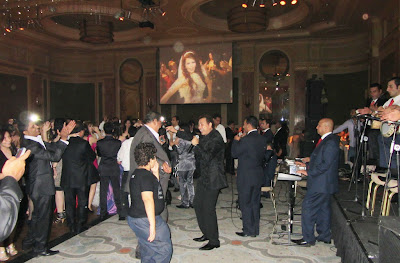 Sha'bi music was born in Cairo's bustling working class neighborhoods during the 1970s, a chaotic time when Egypt was opening up to the West as well as the conservative Islamic influence of Saudi Arabia.  The word itself can mean "folk," "popular," or "traditional," and can be cause for confusion.  Cairo's urban sha'bi music is blend of rural folk rhythms, melodies, and instruments with Western aesthetics.  So accordion, kawala flute, and Arab percussion combine with electric guitar, keyboard, bass and drums.  Sha'bi's most distinguishing feature is its lyrical content, which is decidedly local, entertainment aimed at the irreverent masses.  Sha'bi scholar James Grippo writes that today's sha'bi singers are united by "their embodiment of the vulgar, downtrodden, curious, sexy, obnoxious, clever, authentic, backward and hilarious..."  Little wonder that intellectuals look down on this music, and radio and television have almost completely ignored this genre--as though it did not exist--until quite recently.

Coming back to our adventure, it is important to know that Hakim is one of the biggest names in sha'bi over the past 15 years or so.  He has developed a powerful sound with a full brass section and four percussionists.  His recordings are beautifully produced and consciously aimed at a Western audience as well as the local one.  He has toured in the US, including a recent appearance at Millennium Park in Chicago.  So when Hakim performs at a wedding, it's not apt to be taking place in an alleyway of a crowded neighborhood, but rather in one of Cairo's ritziest hotels.  We met him at the Intercontinental in Heliopolis, part of Cairo's young, urban sprawl heading east toward the airport.  When we arrived, a zaffa (procession) band was regaling a pair of newlyweds and their guests with loping hand drum rhythms and the wail of the double-reed mizmar in the lower foyer.  We'll visit with a zaffa troupe next week, so stay tuned for more on this popular wedding ritual.

Hakim appeared in the hotel lobby wearing a white shirt and pinstriped vest, close-fitting designer jeans and pointy, black leather shoes.  Before this first wedding, he seemed a tad on edge.  He regretfully told us that there were no proper concerts this season as in years past---"No sponsors, no concerts," he lamented, "because we are having a lot of problems in Egypt this year."  For Hakim, weddings are a different animal from staged concerts.  They are less about art and spectacle than about making "a very special connection with people."  For this reason, he asked that we not take out any big cameras or recording gear, but simply watch.  (He allowed for point-and-shoot photos at the second wedding, hence the images here.)  With that, Hakim downed a glass of water, his pre-performance ritual--took up a cordless microphone, and waltzed into a banquet hall where his band had already struck up his traditional wedding opener, "Salam Allaikum."

The room was cavernous and elegant with chandeliers, flower arrangements, and the newlyweds (not the same couple we saw earlier) seated on a throne-like, white settee at the far end of a shining, white stone dancefloor.  Hakim gestured to the newlyweds to join him, and as they came forth, the singer was surrounded by a scrum of revelers in black tie.  The room was far from full, and it took a couple of songs before everyone was standing and joining the scrum.  Cameras were everywhere, from cell phones held aloft to professional videographers perched on step ladders with glaring lights on their cameras.  Gradually, men and women separated into distinct circles, close but separate.  All of the women were veiled.  Hakim moved between the two groups, revving the energy in one camp and then the other.

The band sounded fantastic, with keys, guitar and bass making a bed of sound over which percussion, brass, and especially, the active kawala flute dominating.  Two male backing singers supported Hakim's unmistakable keening voice.  This may not have been a stage show, but the groove and sound were there, and it was a thrill to hear.  After about seven songs, Hakim exited singing, handed off his cordless microphone and vanished, saying to us, "See you soon."  As we made our way downtown to the Four Seasons Hotel for wedding number two, we learned that this wedding had been attended almost exclusively by families of the Muslim Brotherhood.  The next wedding was for a Coptic Christian couple, and the guests a mix of Caireans from varied backgrounds.  Hakim showed up all in black this time, looking super sharp.  The setting was similarly grand, but this time, the mood was wilder.  This bride was a dancer, and the crowd, a few of them drinking alcohol, became ecstatic, driving Hakim and his band to a whole new level of energy.  At one point, Hakim joined the couple and another gentleman on their matrimonial stage and they danced and sang together before an exultant room full of well-wishers.  It was now past 2AM.  Christian weddings, we learned, happen late.  And when Hakim made his exit around 3AM, they were at last ushered into the next banquet room for dinner. 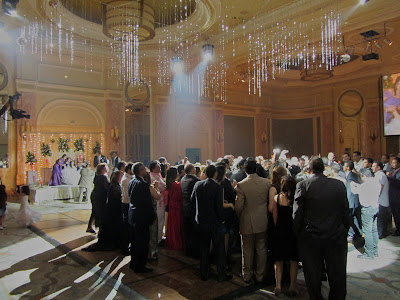 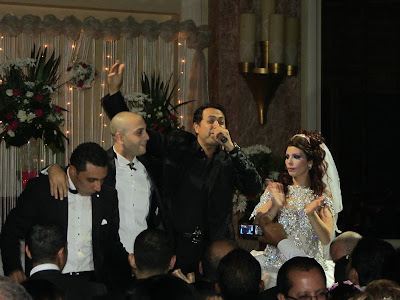 Hakim seemed particularly pleased with this event, and now made what struck Sean and I as an absurd proposition.  Did we feel like taking a horse ride by the pyramids to watch the sun rise?  This clearly fell into the "offer you can't refuse" category, and before we knew it, we were off to Giza through Cairo's still bustling traffic.  Hakim was riding in his yellow jeep, and we in another car with his sound engineer, Alaa El-Ghoul.  A call came with a question for us:  horse or camel?  In recent years, Hakim has become a huge horse-riding enthusiast.  He owns a prize-winning Arabian horse, and his 14-year-old son is already competing in jumping events.  Nevertheless, we went with camels--mostly for the novelty of it.  Crazy as it seemed, this was a peak experience.  Camels move with a rhythm all their own, and one is high above the ground.  So, lurching and grinning, we moved into the desert and had our first view of Egypt's iconic pyramids. 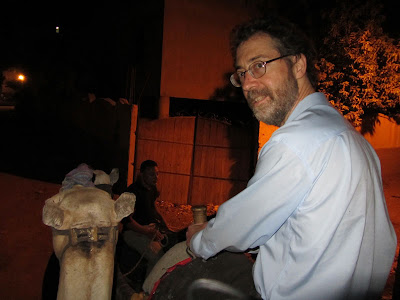 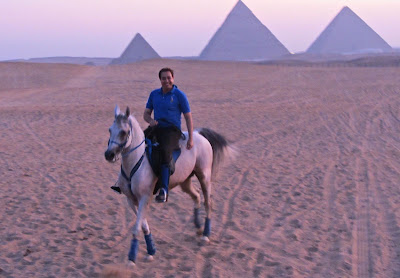 Afterwards, Hakim took us to breakfast at one of his favorite eateries, a humble Egyptian rice-milk and ice cream joint called Malky.  Throughout all of this, Hakim showed himself a man of the people, waving back at fans, posing for photos, exchanging jokes with the folks at Malky.  He might be a denizen of 5-star hotels, and an equestrian, but Hakim has not lost his common touch.  For all he's seen and done, he's still sha'bi! 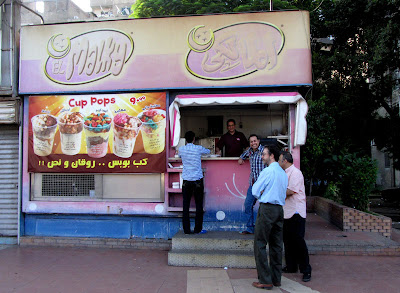 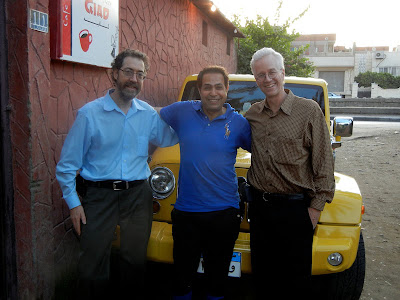