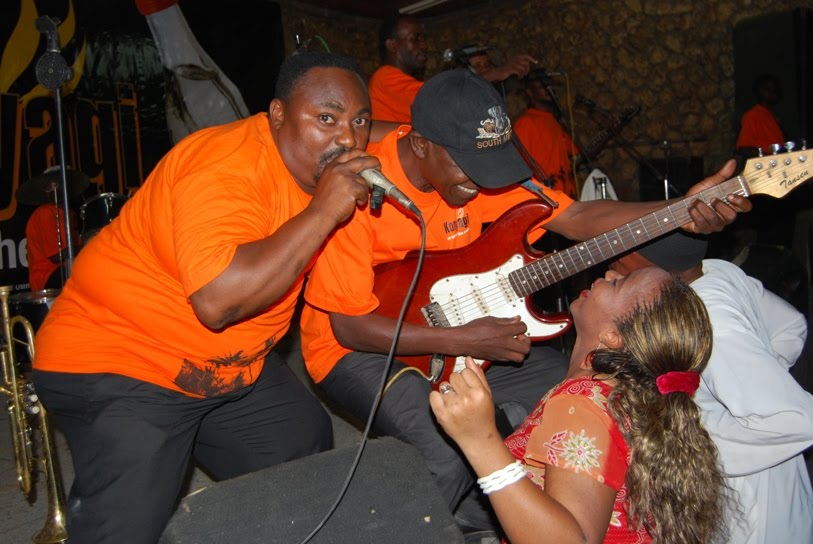 Blog May 27, 2014
Dansi: A Primer
In our Hip Deep program "Live From Bongoland: The History of Tanzania's Music Economy," we trace the evolution of musiki wa dansi, the guitar-based, big-band music that dominated the nation's clubs and airwaves for well over three decades. Dansi, with its precision harmonies, laid-back beat, and brilliant guitar work, has a ready appeal to ears raised on rock or soul. Despite this pleasing first impression, long-form composition and Swahili lyrics can make it  difficult to differentiate between the various groups and styles that defined the music's evolution. So, because we dislike it when brilliant music is blended into an undifferentiated mass, and because we want you to like dansi as much as we do, we have prepared this primer as a guide to further listening.     http://youtu.be/uo5r9osM-hE

Musiki wa dansi first began to develop in the '30s, as Tanzanian musicians began to play ballroom dance music for the British colonists then ruling the territory. These musicians began to mix ballroom styles and instrumentation with a variety of the traditional ngoma music played within their own communities. The result was the earliest forms of dansi.

While developing for several decades, modern dansi really dates from the introduction of Cuban music to this already percolating mix. Inspired by the sounds imported by record company HMV's extraordinarily popular GV Series, an entire generation of musicians turned to the rhythms and styles of Cuban music, attempting to copy the sophisticated sounds they heard as closely as possible. But even at this early date, a distinctly Tanzanian style crept in. Salum Abdullah is a near-perfect example of this--it's close to Cuban, but skewed in a wonderfully particular way.

As time went on, Cuban music became more fully integrated into what had become an increasingly home-brewed sound. Recording around the time of independence (1961), groups like Western Jazz were instrumental in the development of the classic dansi style, ground zero if you will. Intricately woven guitar playing, a feather-light dance beat, harmonized vocals; all the elements that would define the next two-plus decades are here. Western Jazz  developed out of a performance club connected to a traditional regional aid society--the "Western" in their name comes from the area of Tanzania where their members originated rather than anything to do with influence from the Western world.

While NUTA Jazz (acronym for National Union of Tanzania) shares many musical characteristics with Western Jazz, its early sound is set apart by the horn section that has been integrated into the group's playing. These horns are not only used to create call-and-response patterns against the guitars and voices, but also allow the band to borrow the kind of hard-hitting fanfare that defined American soul during this period. As time went on, well-orchestrated horn sections would become a defining aspect of dansi.

NUTA Jazz is also notable for being the very first state-sponsored band in Tanzania, drawing regular paychecks for their musical labor from governmental employers. This state support meant that the band could focus entirely on composing, practicing and performing, without worrying about money or even logistics like housing or transportation. The result was the rapid development of a large, diverse and competitive music scene.

One of the major influences on the development of dansi came from the Congolese musicians who moved to Dar es Salaam during the '60s and '70s, escaping both musical competition and political unrest in their native Zaire. International Orchestra Safari Sound combined these foreign players with Tanzanian locals, epitomizing the dansi sound that developed during this period. The band stretches out in a way that's new, playing with the full dynamic and tempo range of the ensemble. The early sections are incredibly relaxed, while the band really kicks in on the second, uptempo part of the song. Stressing the multisection approach of the music was a highly effective move borrowed from the Congolese, and was used to inspire dance-floor frenzy.

For a less-Congolese influenced take on dansi, check out Morogoro Jazz and Orchestra Super Volcano, both featuring the astounding guitar work of Mbaraka Mwinshehe. This is Tanzanian guitar band music at its finest--spaced-out jangle and fuzz over a laid-back rhythm section that allows for guitar heroics of the highest order. Mbaraka in particular has an amazing style--Cuban and rock 'n' roll and Congolese all at once.

Milimani Park Orchestra is, in many sense, the peak of classic dansi. Comprising a dream team of Tanzanian veterans, the band was formed in 1978, and basically ran the charts over the next decade and half. Brilliant arrangements, a relaxed attitude combined with an ability to kick into full rave-up mode on a minute's notice, fantastic players--the group had it all. Few bands have ever managed to do so much while sounding so incredibly loose and remaining so entirely in the pocket. Sun-kissed brilliance.

Milimani Park are also notable for surviving the transition from state-run to private bands that occurred in the mid '80s as the Tanzanian economy collapsed and the government found it impossible to continue to pay musicians. They are currently still active as a musician-owned ensemble.

As socialism ended, things changed. This track epitomizes the kind of technological adaptation that Vijana Jazz (who also performed and recorded in a more traditional style) became known for. As dansi bands began to record in the new studios popping up throughout Tanzania during the 1990s, they began to change their sound, adding a modern sheen to a music that was now decades old. Things got glossier than this track, but little we've heard has the same kind of Ghostbusters vs. Rush charge.