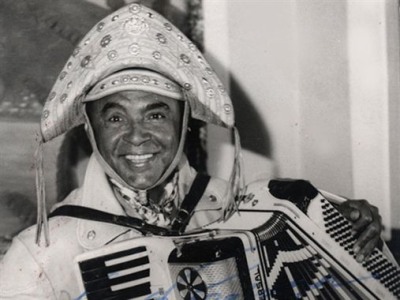 For our program on Luiz Gonzaga, we chatted with Megwen Loveless who has a PhD in Social Anthropology at Harvard University. She wrote her dissertation on forró music and dance, and teaches Portuguese.

Megwen Loveless: A relatively recent cultural phenomenon (dating from the mid-twentieth century), forró music arose in the Brazilian northeast sertão (roughly translated as "desert backlands") and has since developed into a national treasure of folkloric tradition. Like other young Brazilian musics, it is constantly evolving, though a traditional base line has been conserved by several roots bands - it is this traditional music, called forró pé-de-serra, that Luiz Gonzaga molded and marketed into a popular Brazilian genre.

The pé-de-serra style is generally played by three-piece bands including an accordion, a triangle, and a double-headed bass drum called the "zabumba." (The name of the instrument closely matches the sound made by the drum: za-BOOM-bah!) What is so alluring about this music is the combination of African, Amerindian, and European influences: a basically Western melody line coupled with the wildly syncopated two-tone drum notes gets even the gringos up and dancing!


Where did forró come from?

ML: While Luiz Gonzaga is responsible for developing present-day forró as it is heard in Brazil and around the world, its genealogy traces back many more generations to the zabumba ensemble groups of the northeast, which featured the forementioned bass drum along with several fife and fiddle players. These ensembles played at weddings and baptisms - and kept the neighbors up until all hours with the beautiful racket. Probably in the first years of the 20th century, small box-like accordions were transported up to the northeast of Brazil, where people called them "harmonicas." This was the kind of accordion that Gonzaga's father played and that Gonzaga first learned to play on. Since radio and television weren't options for evening entertainment in the late 19 th century and early 20 th century, farm workers would get together and make music late into the night.

These weekend dances, which would draw people from miles and miles around, were called forrobodós - or sometimes just "samba" (even though they aren't what we would call samba today!). This is most likely how the name of the forró genre originated, though most Brazilians today will insist - passionately - that "forró" is derived from a Brazilian pronunciation of North American dances called "For all" that were hosted for poor workers throughout the northeast. Though this explanation is probably not true, it represents a different truism: Brazilians can always improve upon any cultural importation, especially if it involves a sexy dance and a fun syncopated beat. (!)

How do you explain Luiz Gonzaga's crazy outfits?

ML: Growing up in the sertão, Luiz dreamed of joining Lampião, a volatile and ruthlessly dangerous "Robin Hood" who terrorized the cities and plantations of the northeast in the 1920s and 30s. Lampião and his troops, called cangaceiros, toured the sertão, stealing from and killing elites, but often helping the farm laborers that provided his band with aid and information. These backland bandits were renowned at the very same time that North American Western films were in vogue throughout Brazil - and the geographic and cultural empathy Gonzaga and other Brazilians felt with the "wild west" isn't lost on anyone! The cangaceiros resembled the cowboy actors from the north that Brazilians watched in countless imported films. One could argue, in fact, that Brazilians reconceptualized American cowboy culture into their own cangaceiro culture, giving Lampião the kind of popularity and notoriety that Hollywood actors of the time were getting from North American audiences. Thus when Luiz Gonzaga donned a cangaceiro hat (a leather hat whose brims were folded back and approximates an American cowboy hat set sideways) to enhance the "local color" of his performances, the marketing ploy had an effect that is still reverberating throughout the forró scene. Now expected attire for any "traditional" forró musician, the leather hat reflects the endless ingenuity of Brazilians, a standard by which their national identity is consistently measured.