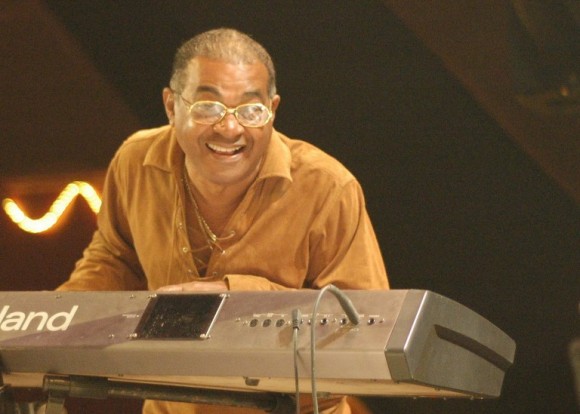 We've put together this feature to help you learn more about the artists played in our program "Afropop Worldwide's Summer Concert Preview 2014." So dig in! We'll see you out there!

Caetano Veloso is a Brazilian composer, singer, guitarist, writer and political activist. He began his career in 1965 singing bossa nova, but Veloso came to national attention together with his friend and colleague from the University of Bahia, Gilberto Gil, as a leading figures of the 60's tropicália movement. Caetano has remained highly active though- his latest album Abraçaço demonstrates the activity and power of a man half his age.

Razia Said is a Madagascar born singer-songwriter whose nomadic life has taken her across Africa to France, and then through Italy, Ibiza, Bali and New York. Said’s album, Zebu Nation is an inspiring collection of songs that draws deeply from the music she heard growing up in the town of Antalaha in northeastern Madagascar.

Born in Madagascar, Charles Kely is an author, composer and guitarist. He is currently focusing on his solo career with the release of his CD Zoma Zoma in his own unique manner, consisting of the open gasy style, acoustic music from Madagascar, bossa nova, jazz, blues and funk.

Dubbed “the king of Salegy” by his fellow Malagasy countrymen, Jaojoby has helped to turn the music of his homeland into a presence on the international scene. Jaojoby initially launched his career in 1970, when he placed first on a Malagasy   Star Search equivalent, and Jaojoby has continued to attract a loyal following with his infectious dance music ever since. This Salegy pioneer recently toured the U.S. and Canada promoting the preservation of Madagascar's irreplaceable rainforests along with Razia Said, Charles Kely and Saramba. You can read about the tour here.

Cesar Pedroso is a composer, writer, pianist and conductor born in Havana, Cuba. He is a founding member of the bands Los Van Van and his own band Pupy y Los que Son.

Noura Mint Seymali is a talented vocalist and musician from Mauritania. Now accompanied by her husband and lead guitarist, Jeich Ould Chighaly, she began her career as a backing vocalist for her stepmother, the legendary Dimi Mint Abba. Seymali’s unique blend of music from her home country—she plays the ardine, a traditional harp— with modern rock arrangements makes for a brilliant and heavy form of Mauritanian rock.

Musicians from Mali, Martinique and Wisconsin joined together to form Benyoro, a band that celebrates West African music by reconfiguring traditional Malian rhythms with modern American instruments and arrangements. Based in New York, Benyoro epitomizes African music in America and has performed at numerous few venues and festivals, including the U.N. General Assembly and Brooklyn Bowl.

Beninese singer-songwriter Angelique Kidjo is an iconic figure in the African music culture. Kidjo’s work traverses the boundaries of genre and ethnicity to reflect her diverse musical influences. In addition to her musical career, she is also an activist and author, with much of her efforts focused on promoting African pride and female empowerment. We recently interviewed Angelique about her book Spirit Rising.

Ricardo Lemvo is a Congo-born singer of Angolan ancestry. His music, aside from being deeply inspirational, is also innovative, blending Cuban salsa rhythms with pan-African styles such as soukous, rumba, kizomba and samba. Lemvo’s music inspires his audiences to celebrate life and “let loose.”

Samba Mapangala is a master of Congolese rumba singing and one of the most renowned musicians from that country's golden age to remain an active performer. Mapangala founded his band, Orchestra Virunga, in Nairobi. He has since moved to Washington, D.C. where he still lives today. We were honored to have Samba perform at our 25th Anniversary Gala. You can watch an intimate backstage performance from that event here.

Check out our Summer Festival Round-Up for info on where these and many other great artists will be performing this summer!