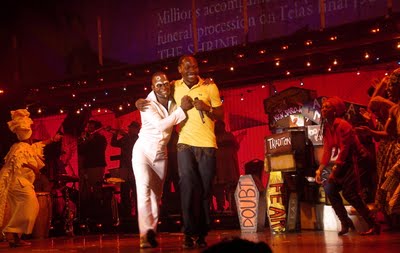 Afropop correspondent Mark Gettes is currently in Nigeria, reporting on the historic event of FELA! the Broadway musical opening in Lagos.

The hottest place on the planet this week, theatrically speaking, was not in New York or London but in Africa. FELA!, the Broadway musical about the life of Afrobeat pioneer and political rebel Fela Kuti, began an historic and groundbreaking series of performances in Lagos, Nigeria, Fela's home city.

Produced by a Nigerian Production company, Broken Shackles, with the assistance of the Lagos State Government, the entire Broadway production, consisting of over 80 cast members and crew, as well as 19 tons of equipment, were transported to Lagos to present the show. According to Stephen Hendel, the originator and producer of the original Broadway production, this is only the second time in the history of Broadway than an entire Broadway cast has been transported to a foreign country to perform a show, and is the first time a Broadway cast has performed in Africa.

After a single performance last week of a concert version of the show at the New Africa Shrine, where they were joined onstage by Femi Kuti, Fela's eldest son and Afrobeat bandleader, the full version of the Broadway show opened on Thursday night at the Eko Center, a conference hall converted to a theater for the purposes of the show. Closer to the size of Madison Square Garden than to a Broadway theater, the Eko Center was filled almost to capacity for opening night. Many luminaries were in attendance, including Nigerian Nobel Laureate Wole Soyinka, Former Governor of Lagos State, Ahmed Tinubu, his Excellency Babatunde Fashola, the current governor of Lagos State, and many other Nigerian politicians and members of Nigeria's musical, artistic, and fashion communities. In remarks from onstage before the show, Governor Tinubu spoke of how he became absolutely determined to bring the show to Nigeria after seeing the show on Broadway on Broadway in New York. He also commented that he thought it was reason for great optimism that a show such as FELA!, which in parts is openly critical of the Nigerian government and power structure, could be presented freely and openly in Nigeria, particularly as it opened just days after the Nigerian Presidential election. 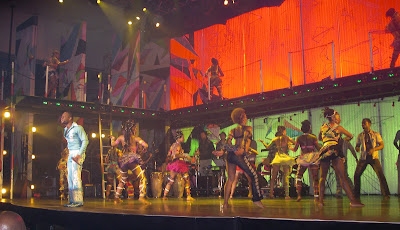 Response to the show was overwhelmingly positive, both from the public and the critics. It was immediately obvious that the audience was not a New York or London audience. Being more familiar with Fela's life-story and music, they joined in on many of the songs, picked up on many of the jokes quickly, and seemed to particularly empathize with those parts of the dealing with Fela's struggles with the government. Lillias White, who plays Fela's mother Fumilayo in the show, was moved to tears when, within one bar of starting to sing Fela's song "Trouble Sleep", the whole audience joined in and sang the entire song with her. Many members of the audience also expressed astonishment that the American musicians in the show, many of whom are from the Afrobeat band Antibalas, could perform Fela's music with such skill and passion.

Of course, much of the audience's reaction to the show depended on their response to Sahr Ngaujah who played Fela. Whatever skepticism they might have had about a non-Nigerian playing the role of their national hero seemed to vanish with the first "Yeah Yeah", and at the end of the show he was greeted with a standing ovation. One member of the audience, a man known as Captain, who had been a close friend of Fela's, told me "Now in my life, I have witnessed two Felas - Fela, and Sahr/Fela." For many of the cast members, variously of African-American, African living in America, and Afro-Caribbean descent, performing in Africa and in Fela's hometown of Lagos was a tremendously emotional experience with many of them describing it as one of the most moving events of their lives.

After opening night, Kevin Mambo alternated in the role of Fela with Sahr Ngaujah. The outpouring of support and the sharing of emotion that continued between the audience and the cast was overwhelming and is best summed up by Kevin Mambo's statement after his first show:

"Wow. first performance in Naija! They laughed and cried with us. A boy came to me during the walk-around and asked me to return from the dead with tears in his eyes because Naija needs me, and after the show during "Gentleman", the audience mobbed us with love love love. Words can never express. Diaspora touching and sharing together. How could we be so fortunate? Humbled and exhilarated."

FELA! will continue to run in Lagos through the Easter weekend. If you missed it, don't be too sad - the show will tour in Amsterdam and London this summer, and plans are afoot to bring the show back to Lagos, and to other parts of Nigeria and Africa, sometime soon. As Fela would say - Plenty More To Come....