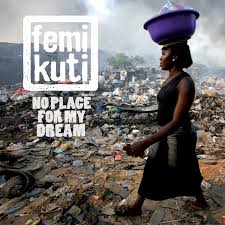 No Place For My Dream is Femi Kuti’s 10th full-length album, and musically, it may come to be considered his best. Certainly, it's a strong contender for the best work that Femi has released since his international breakout, 1998's highly produced Shoki Shoki.

Based on the singles “The World Is Changing” or the title track “No Place For My Dream,” you might come to the conclusion that Femi is keeping it safe musically, sticking to familiar musical and lyrical formulas. Throughout No Place, Femi sings straightforward political messages in plain English, for example: “More people are suffering/Suffering people can’t take anymore….Now the rich they cry/But the poor still die/Poverty no be lie.” While it's impossible to doubt the sincerity of his message, the effectiveness of his approach often leaves something to be desired.  While politics is certainly in the family tradition, where Fela used metaphor, satire and humor to make his point, Femi tends to rely on blunt cliché, a  far less rhetorically effective method. As a result, his father's political messages reached further and with more influence, carried by lyrics containing a bite that Femi has yet to equal.

That said, the true pleasures of this album are the fervent instrumental sections of tunes like “Na So Wee See Am,” the opener “Nothing to Show For It” or “Wey Our Money.” The energy, attack and virtuosity of the playing on the album are often reminiscent of contemporary African-American gospel bands. This connection seemed even more pronounced in Femi's recent U.S. performances, where he whipped his band The Positive Force into a fast-paced frenzy that could (and did) last for hours.

Surprisingly (and delightfully) there are also three songs built on fast 6/8 rhythms: “Action Time,”  “Carry On Pushing On,” and “One Man Show.” These tunes break up the monotony of the million Afrobeat records that rely on the same rhythmic patterns, and contribute to the energetic attack of Femi’s new music. The most raucous and exciting of these three tunes is “Carry On Pushing On,” which rests on a brisk bass line, with jumpy drums and call-and-response horns that prod the beat forward. After a sudden break back to the bass line, Femi delivers his message:  “The Euro-zone in crisis…The Arab Spring no bring roses…But we carry on pushing on/For better living.”

The most surprising and emblematic tune on the album is the closer, “This Is Only the Beginning,” which Femi told us in a recent interview is his favorite track on the album. It is an ambitious instrumental romp that uses flashy unison runs to challenge the edges of the band’s abilities and push the music to the edges of possibility. Femi attributes this new direction to the trumpet, an instrument he has been learning to play for the past few years. If this truly is "Only the Beginning,” then we are very intrigued to hear where this path will lead Femi next.