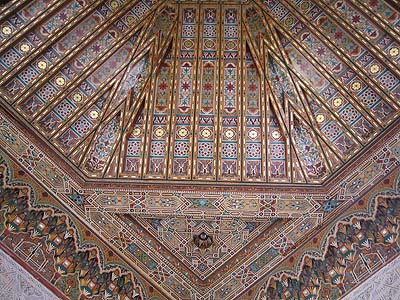 May-June, 2004
The 10th annual World Sacred Music in Fes, Morocco, proved a rich experience for the Afropop Worldwide team. Four of us spent a week in Fes, recording, photographing, filming, and interviewing an amazing array of artists. Our time in Fes gave us material for many radio programs, including "The Legacy of Al-Andalus: Part 2, North Africa and Beyond," and "Part 3: Reverberations," as well as "Youssou's Egypt: Senegal Looks East," and three programs about the festival itself. 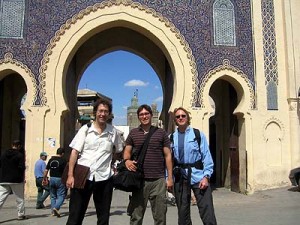 The festival takes place over 10 days in five venues, each very different, four of them located in one beautiful section of the old city of Fes, the medina. Fes is one of the only remaining cities in the world that still preserves aspects of its medieval life. The city's history goes back to the 8th century, and for over a century now, the medina has been protected as a kind of "living museum." Walking the narrow streets of this dense, interconnected, honeycomb metropolis, you find people pounding metal, carving wood and plaster, painting, laying tile, curing, dying, and stitching leather, and countless other manual activities all of which contribute to the city's amazing visuals. As we learned, there is a complex relationship between the artisinal and musical life of Fes. To begin with, people living in such close quarters have learned to make all the sounds associated with their work conform to unique rhythms. Work itself becomes music. One day, we followed two wandering Gnawa musicians as they roamed through a dazzling array of work zones, entertaining the workers.

Many people we spoke with talked about Fes as a city of artisans, and a place where people live in such close quarters that work takes on an unusual relationship to music. Musicians play for artisans as they work, and have since the dawn of life there in the 8th century. But more than this, the sounds made by workers must meet certain aesthetic standards. Each copper worker has a particular way of hammering so that anyone in earshot will know him by the sound of his tapping. And the tailors who sew the baboush slippers worn by men on the streets of Fes, work their stitching to a very specific rhythm. In short, music infuses every aspect of life in this city of creators. There are no cars and few machines in the city. Even the sound of a sewing machine is a relatively new arrival. 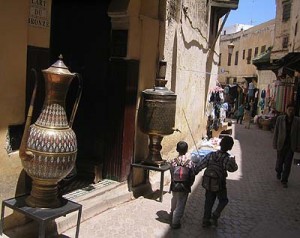 Fes has a longstanding reputation as a place of accord and amity between Muslims, Jews and Christians. It is an overwhelmingly Muslim place--One taxi driver, when told to go to a place near the Catholic church, asked, "What is a church?"--but that history of inter-faith dialogue, deeply related to the legacy of medieval Al-Andalus, is an important starting point for this festival. The World Sacred Music Festival was begun in the aftermath of the first Gulf War, as a way to bring about more dialogue between the world's faiths, and to showcase the beautiful, healing music associated with each of them.

As part of the festival, a series of seminars provided opportunities for literal dialogue between representatives of many faiths and social initiatives, all around the world. Unfortunately, wrapped up in the festival's extensive musical offerings, the Afropop team did not get to cover these seminars--yet another reason to return to this feast-like cultural celebration. There were also workshops and smaller concerts, some only loosely tied to the official festival. Suffice it to say that anyone coming to Fes during these 10 days will be all but overwhelmed with tantalizing choices. There is only so much one, or even four, people can do! 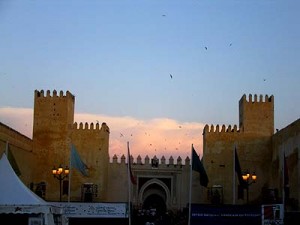 The grandest festival venue is the Bab Al Makina, a royal entrance to the medina built in 1886. Bab means "gate" or "doorway," and stunning, arched "babs," covered with fabulous ceramic work and other adornments, dot the medina's walled perimeter. But the Bab Makina is perhaps the grandest. Bathed in sunset light, fading to luscious stage lighting during an evening concert, it made as splendid a setting for the festival's headliners, including The Whirling Dervishes of Konya, Youssou N'Dour and Fathy Salama, Meher Ali and Sheher Ali (Qawwali musicians from Pakistan), Miriam Makeba, Sabah Fakhri and others.

Afternoon concerts took place under the generous, bird-filled arms of a spreading tree in the outdoor courtyard at the Batha Museum in the medina. These were more intimate events featuring, among others, The Dancing Monks of Tibet, Hussein Al Adhami of Iraq, and the Orchestra of Fes with guest singers Françoise Atlan and Aïcha Redouane. Between the official afternoon and evening concerts, there were a set of concerts free to the public, the so-called Festival in the City. This has proved a great innovation at the festival in recent years. The official concerts are quite expensive, far beyond the means of most residents of the medina. So the idea was to include these people in the spirit of the festival by offering some of the featured acts, and others, in public concerts that anyone could attend. 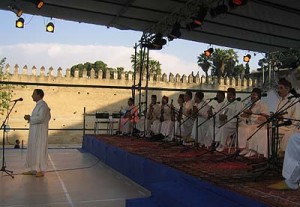 In a vast space near the Bab Boujloud, people poured out of the medina each afternoon to see and hear, among many others, the Fes Malhoun Orchestra, Hussein Al Adhami, The Taktouka Songs of Mohammed Gorfty (Jbel music from Morocco's northern mountains), and on the final afternoon of the festival, the Arc Gospel Choir of Harlem. These concerts had a rowdier feel than those in the Batha Museum, the Bab Makina, or the single concert that took place at the Volubilis Roman ruin, some two hours drive outside Fes. For the Afropop team, the Bab Boujloud concerts were especially satisfying, though. One really felt the presence of the people of Fes, in full celebration, and that was hard to beat.
After 11:00 pm each night, at Dar Tazi, the intimate locale of the festival headquarters, a truly remarkable concert took place. Sufi Nights! It has been said that before the French arrived, Morocco was a jigsaw puzzle of Sufi sects, or tariqas, literally "ways." The ins and outs of Morocco's Sufi orders today is a vast and complex subject, but these concerts, each featuring a different group, gave some insight into the diversity. Tariqa Jilalia of Fes featured flutes, following the spiritual prescription of an Iraqi Sufi mystic. Their concert wound up to ecstatic peaks at which point some rose to dance with the lead drummer. The Kamria Sqalliya gave a far more subdued a capella performance at which no one danced. Tariqa Aïssaouia gave the wildest performance we saw at Sufi night, where the dancing circles and singing along on the part of the young Moroccans present triggered an orgy of flash photography and video camera waving that some found unseemly--certainly not sacred. But the energy that night was astounding. The last Sufi group we saw, Tariqa Harraquia, pulled the pieces together, combining the spiritual slow build of the other groups with the use of oud and violin, elements from Andalusian music. In plain musical terms, it was among the most beautiful concerts of the entire festival.