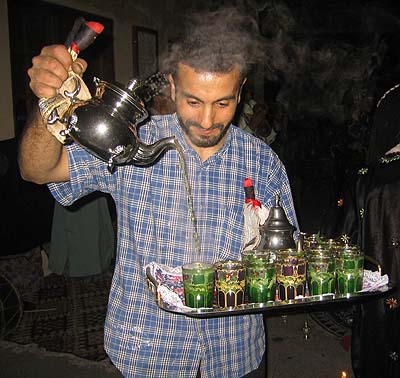 During Afropop's time in Fes, our team talked to a number of musicians and scholars. Here are some choice excerpts from those conversations.

Jonathan Shannon is a musicologist specializing in Andalusian music. After much research in Syria, Jonathan was living in Fes with his wife Deborah Kapchan, who studies the Gnawa. We interviewed both of them. Here are some of their comments. 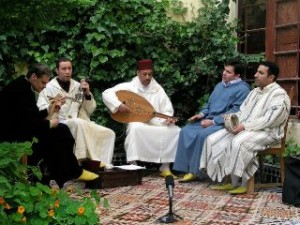 Jonathan Shannon. On the Fes festival: "This is a wonderful festival and you hear some great music here. Whether it's sacred or profane is besides the point because it's beautiful. It was the brainchild of Faouzi Skali 10 years ago, and it's developed over the last 10 years to become this remarkable worldwide event. What I mention this idea of profane music versus sacred music, the Fes Festival in itself in many ways undermines this distinction, the same way that the traditional music in Fes itself undermines any distinction between them. When you're hearing a religious group performing a religious ceremony on a stage at a great place like Bab Makina here in Fes, this is not the original location of the so-called sacred music. So it's in a sort of profane environment, a festival stage in front of the audience.

A number of the performers do not perform traditional sacred music alone. But I think for the founder, all music is to some degree sacred if it appeals to our higher instincts, if it moves us to joy and to contemplate the beauty of the world, and I think that about all the performers at the Fes Festival in to do this in one way or another, whether they are the dancing monks of Tibet or Sabah Fakhri or Youssou N'Dour, or Miriam Makeba or any of these wonderful artists who are coming. What brings them all together is that they are performing music that is joyful and that is meant to bring us out of our profane state, however temporarily, to a state of excitement, a state of Joy, a state of contemplation, whatever happens to be. So I think that is perhaps the most important message of this Festival.

On Moroccan Sufism: "In Suni Islam, Orthodox Islam, you have the Koran, prophetic traditions and a group of cheikhs, or holy men who are responsible for disseminating Islam learning. There is very little mediation between the individual and God. In North Africa, they have these holy personages, inappropriately called saints--that's a Christian term--or friends of God to have followers, who get spiritual blessings or "barika" and who have followers who get spiritual blessings through them, even after that persons death. So in Moroccan Islam you have something very different what you will find in Syria or elsewhere. You have these Sufi orders that are based on personages such as Sidi Ahmed Tijani, that don't have to be particularly ancient. They can be a 150, 200 years old. They have their own rituals, their own liturgies, song styles and genres and so forth. In Morocco you have many of them. Tijaniyya. You have the Hamadja, Aissawa, Jilala. The Gnawa themselves are sometimes considered to be among these, although some do not consider them that way. But they are also a certain ritual ceremonial group. Very much a part of a North Africa tradition of worship that is somewhat different for much of find in the Arab east.

Deborah Kapchan, on the Gnawa: "Asking how the Gnawa relate to Islam is like asking how fish relate to water. They are Muslims. They have been Muslims for a very long time. Many of the people who originally came from sub-Saharan Africa were already Islamisized. They weren't pagan. Some were, however the misconception of the Gnawa as being somehow outside of the purview of respectable Islam is a mis-perception to a large degree, and this is why. They constantly invoke the Prophet Mohammed. They constantly sing praises to God. They sing praises to the saints of Islam. So it is extremely respectful in terms of its religious invocation. There are some elements, just as there are elements in Christianity, of pagan ceremonies, just as there are elements in most major religions that have filtered through, and those are the ones that are usually harped on in the press, both to make the Gnawa extremely exotic, to somehow separate them from notions of codified Islam, and to demean them at times. I think the Gnawa take offense at that, because they are Muslims, they are pious. It is a sacred ceremony, and it is a sacred Islamic ceremony for them, and has been since as far as historical memory exists in Morocco. So how do they relate to Islam? Just as any other Muslim relates to Islam. They have a particular ritual life, which is distinct, but there are many many Sufi paths in Morocco that also have their own way of praising God. The Gnawa do it in one particular way, and the Aissawa do it in another."

Various members of the Sufi group Tariqa Jilalia: "As with Gnawa, Hamadja, and others, this is therapeutic music. If people are sick psychologically, and ask for a lila, and through music, playing on colors and things, they're getting out the bad spirits. By remembering God, instead of going to the doctors, they can be healed by music."

"The heart of the music is the flute. You can't learn it. It's either you have it or you don't have it. It's like the legend of the man who was in front of the sea. The jilali came to him and told him to remember God using the flute. Playing the flute is remembering God. What the speech can't reach, the flute can."

"When I was 19 years old, I was down near the river, here in Fes, and a little girl appeared to me. She was taking a language that I thought was French, but then I looked at her feet and he saw that she was not human. At that point, I felt I was touched, and so the flute came to me. It was something given to him. My house was on the bank of the river, and I saw the girl going inside the river and disappearing. I thought she might be a siren, so I didn't want to follow her, but the result was that three months later, I became sick and went into a trance, and that led to my first experience with the Jilala. Then I took the flute and started to play, and when I came to the city, I met this man, and he was playing exactly the same tunes as I was."

Abdelfettah Sefar: is a master plaster sculptor and owner of Fes Hadara, a restored, Andalusian-style palace that he has made into a self-styled cultural center. We spent a lot of time Abdelfettah, and he shared with us his passion for Fes.

On plaster work: "It's a very ancient art, traced back to Byzantine and Roman times. Muslims took it and pushed it to be a highly abstract art. So there's no figurative representation. Its language is playing on geometry, floral design and calligraphy, all highly symbolic. You really have to work hard to penetrate its meaning. There's a technical side of it and symbolic side of it. Sufi culture, which is the fruit of the civilization, is dividing the world into "the apparent" and "the hidden." So this is the rhythm of the hidden. It's like a veil. God will only reveal Himself when the veil is lifted.

"The plasterwork is sometimes that veil. And through it the people will seek the experience of light and God. And plaster is almost this perfect material to express that because we find it in the heights. It's elevating; it's floating. So if I can show you, for example, in the courtyard of this house how the plaster is making the upper building look as if it's floating. Plaster is both a spiritual material and its dust. We are created from dust. God has fashioned us from dust. I have been doing pieces of plaster which have took me so many hours that they are priceless. So here we are from dust to something very valuable. The artisan of Fez is almost an alchemist--it's taking available materials and transforming them to be very, very expensive, and symbolic of course."

On artisans and musicians: "The history of the music in Fez is to be found in what we call the artisan mode. At the turn of the century when the French came, they found that 80 percent of the population of Fez were artisans. An artisan would be working with his hands, and to take pleasure, he will go to the music. Music was kind of a social thing; it wasn't professional. Music was actually the gathering of all the skills. For example, when I enter into my courtyard and I see the plasterer and the woodworker have worked together like a symphony. So the link between the visual and the music would be found exactly in the society of the artisans. If we take, for example, the babush (leather slippers), and we count the stitches we may find there are 365--everything was calculated, everything has got a rhythm.

On Fes: "I read that if you came to Fes for a day, you can write a book. If you stay a week, you may write an article. If you live in Fes, it's impossible to write anything. Fes is an organic city. Nobody has thought the city through--it was like everybody bringing something and adding it to the melting pot."