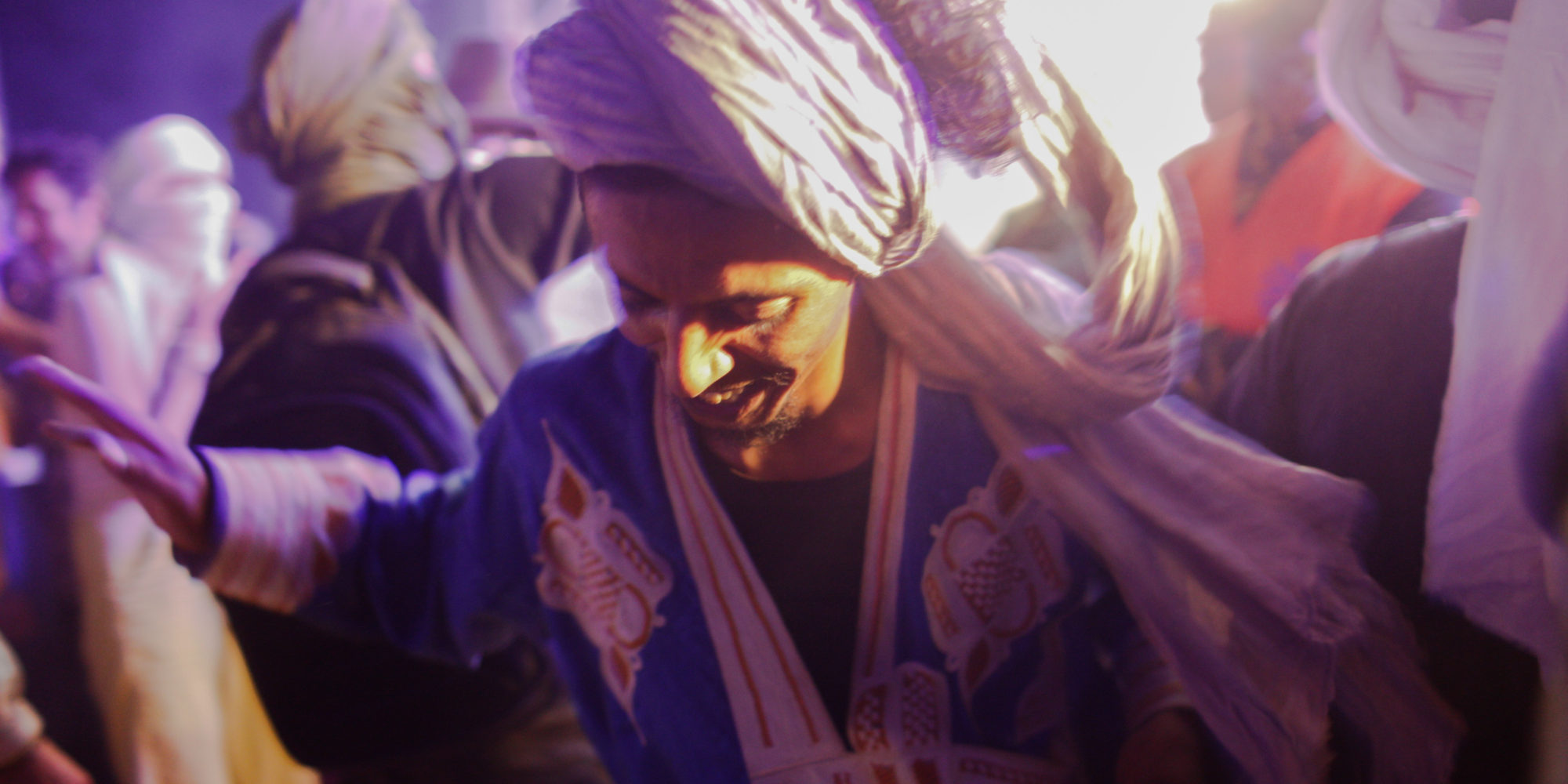 To be honest, I didn’t have very high hopes. The website of Festival Taragalte gave the impression that it would be curated as a fantasyland for European tourists to ogle “the nomads” in their desert habitat in southeast Morocco.

The Sahara, it romantically promises, “invites you to discover...the phantasmagoria of its luminous nights, its changeable winds, its sovereign anger....” It described this year’s edition as an ode to the French Antoine de Saint-Exupéry, the author of The Little Prince, who once worked in the Moroccan desert. There would be a photo exhibit of “The Nomads” as seen by a Belgian man living in Morocco in the 1960s. It seemed like an offer to taste the exotic, but comfortably removed from reality. 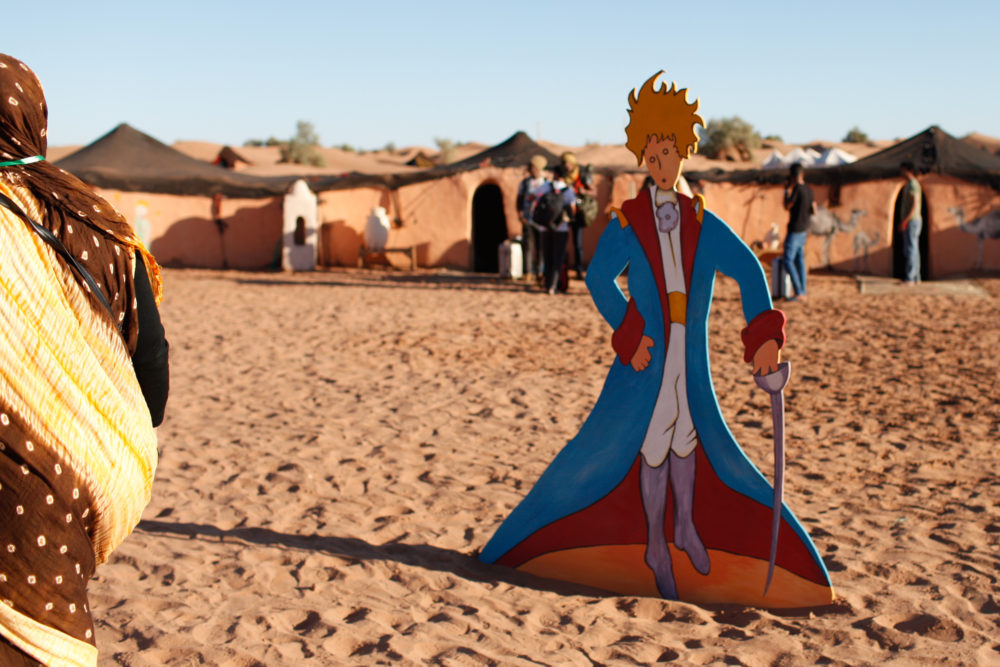 I am happy to tell you that I was quite wrong.

First, some background, and then we’ll bring you to the festival.

Festival Taragalte, a vibrant celebration of local music and culture, takes place amongst a swath of sand dunes outside of M'hamid El Ghizlane. The oasis town is at the end of the asphalt and the edge of the Sahara. Beyond it is a patchwork of sand, mountains, scrabbly bushes and expanses of rock crisscrossed by 4x4 tire tracks (the Sahara, contrary to the popular image, is not just endless dunes). Some 14 miles away is the heavily patrolled Algerian border. 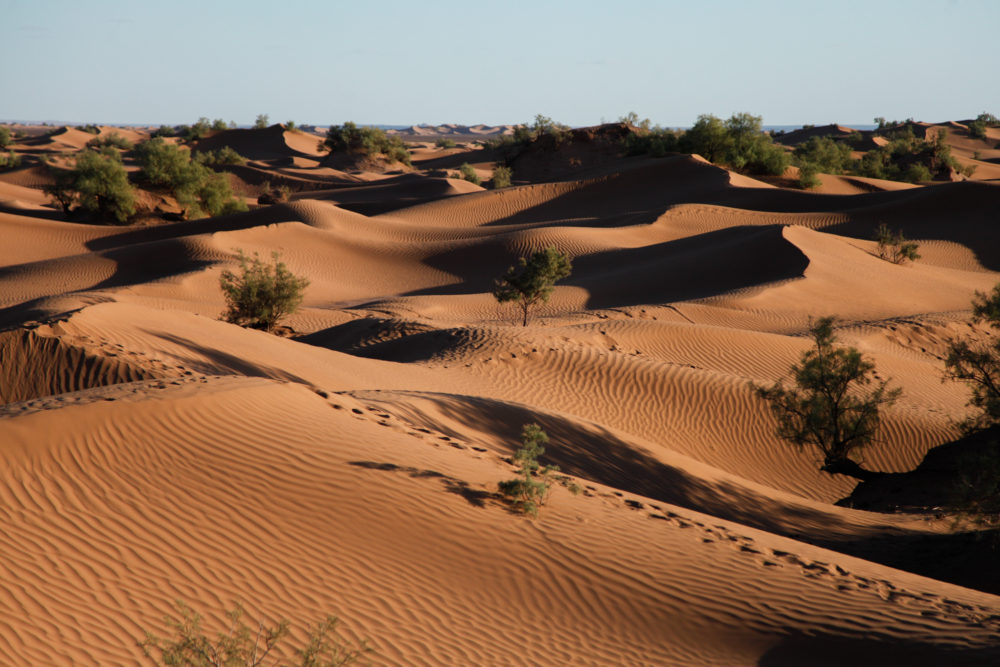 Though remote, M'hamid is well trafficked by many of Morocco’s millions of tourists, who seek out its luxurious desert camps, Instagrammable camel rides, and an offer to escape.

Like much of Morocco, tourism keeps the local economy afloat. Tourists, though, only began arriving in the 1970s, the new business truly establishing itself in the ‘00s, in parallel with the introduction of electricity, paved roads and cellphones. 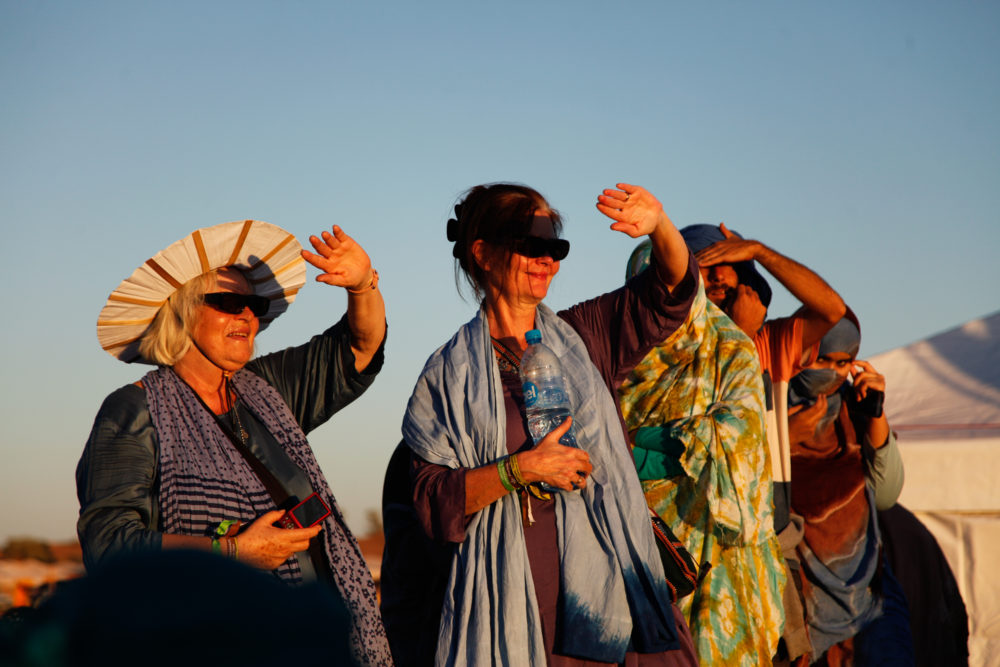 For millennia prior, most of the people of M’hamid lived nomadically. Caravans would stop in the date palm oasis here after long voyages through the open desert from Timbuktu or Tamanrasset. Here they would trade, rest, dance and sing, and fall in love. It’s long been a place of cultural exchange and creation amongst the Saharan communities now fractured by the borders of Mali, Niger, Algeria, Morocco and Mauritania. The desert was like a connecting ocean, and M’hamid was one of its ports.

“This festival has actually existed for a long time, but in a traditional manner, during the time of the big caravans,” Taragalte’s director Brahim Sbai told me. When he and his brother Halim founded Taragalte 10 years ago, they saw it as a modern revival of M’hamid’s long-running but fading date harvest festival, or moussem. Given the context, it was needed. 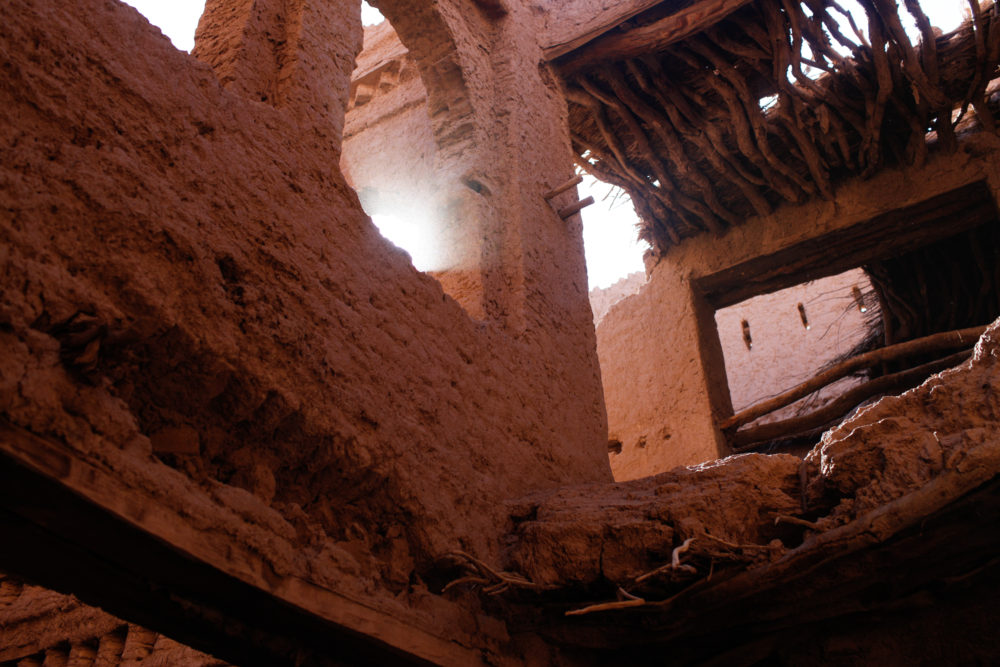 The crumbling, abandoned remains of a huge old family kasbah near the festival grounds. Sand dunes are slowly swallowing it and the nearby, still-inhabited town.

The nomadic way of life has all but fizzled out. The Morocco-Algeria border was drawn in the 1950s and the new nation’s urban powers claimed dominion over the desert. Since, the globalized economy took hold and political conflict closed the border entirely in 1994. The main resource locals had — mobility — was made null. Drought and upstream dams then choked the vital water supply, pushing more and more people into wage labor in nearby mines and big cities.

Full-fledged nomadism just isn’t possible anymore. The only people making the perilous desert crossing these days are northbound migrants and traffickers, and, in some areas, armed extremist groups. “The space is reduced, so the nomadic life is also reduced,” Sbai told me. “Today we remain nomads in spirit.” 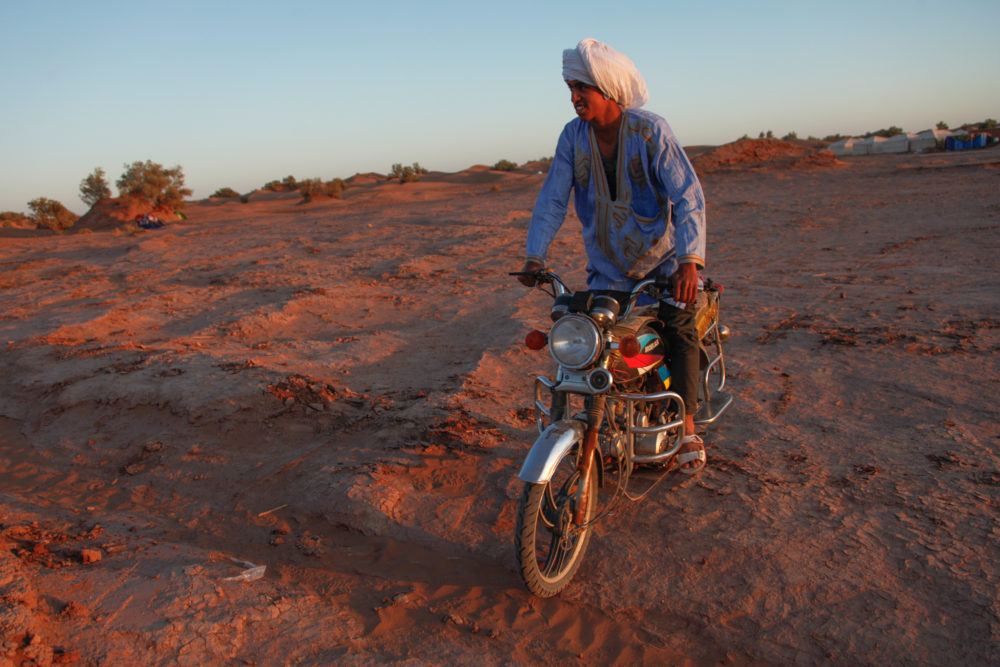 A young M'hamid local rides a motorcycle through the festival grounds.

In the absence of trans-Saharan mobility and enough water for pastoralism and agriculture, M’hamid has turned to new resources: identity, landscape, and cultural creation. Nomadic culture, though mostly a relic rather than a lived reality, has become a tourist attraction, along with the desert that birthed it. The people of M’hamid can now work as “professional nomads,” hiring themselves out to guide both foreign and Moroccan tourists through an approximate experience of a life they could have been living.

One young guy from M’hamid, decked out in the traditional gandoura robe and cheche headscarf, told me he works in desert tourism while also studying law, traveling to his university in Agadir for exams. “Intelligent nomad,” he joked.

Morocco’s national tourism brochure calls M’hamid — where nation-building has rendered nomadic life no longer viable — the “Mecca of magic nomad life.” Besides the core bits of daily life, the material of nomadic culture is mainly kept alive in the context of tourism. Sedentary communities with cars and bikes would have no use for camel husbandry, for example, if not for the demands of tourism. Even the social fabric would fray (and already has, to a degree) if outside money didn’t allow people to stay and work in the town. 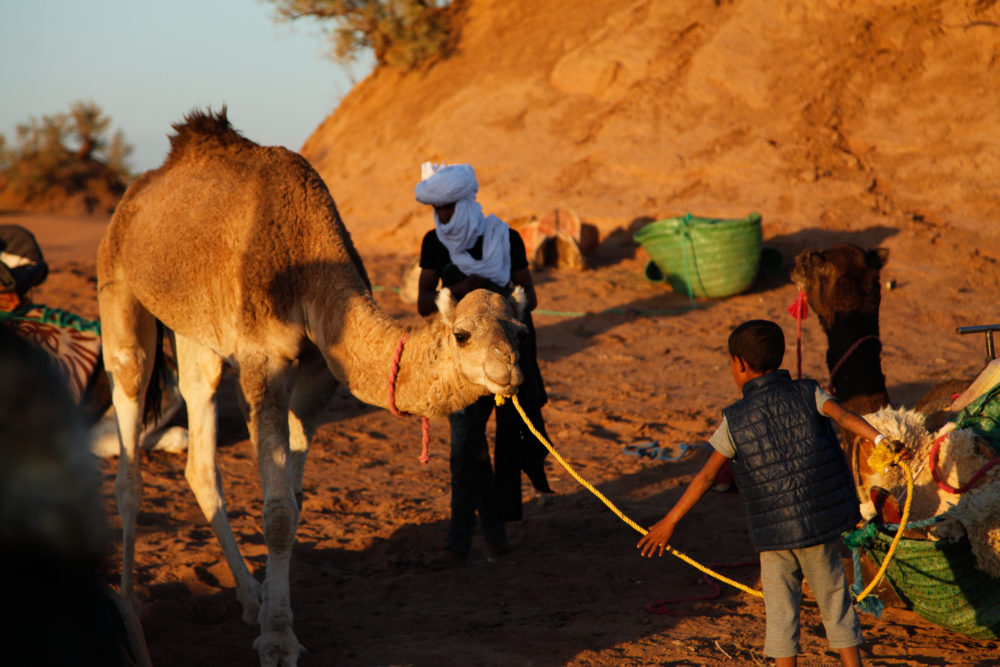 Options are limited, Sbai told me. Without tourists (including those coming for medicinal sand baths) people would likely emigrate to find greener pastures elsewhere.

So, responding to outside expectations, the markers of nomadic heritage are on display: bread cooked in the sand, sugary tea, dates, camels, gandoura and cheche, and thick brown camel-hair tents. Camel guides may hide their cellphones to preserve the feeling of stepping into the ‘unspoiled’ past. Local business owners and tour guides are in control of curating the experience, but tourists won’t likely keep coming if expectations aren't met. 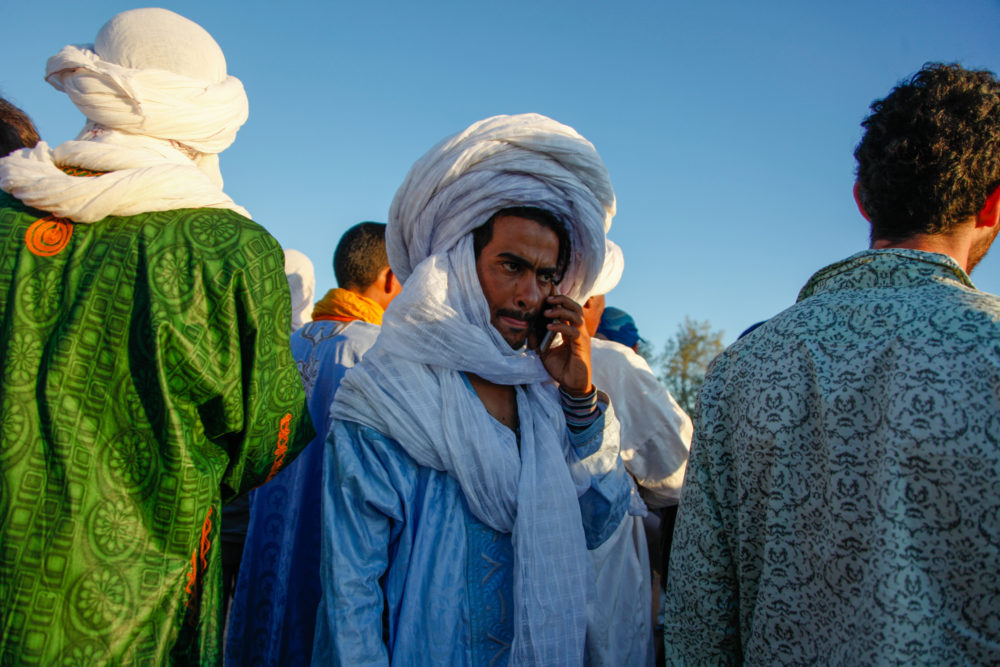 A festival attendee with gandoura, cheche, and cellphone.

It’s up for debate whether the nomadic culture reproduced for a foreign audience is authentic or just a facsimile. If visitors are being sold an experience that doesn’t reflect the lived reality that remains after they leave, does that make it hollow?

Sbai is well aware of this tension. He works to make sure Taragalte can help ground visitors in the reality of the place. “This is not the simple tourist circuit, but a cultural event, where they can understand the profundity and authenticity of the country and its culture,” he told me. That includes Moroccan tourists, who can come to learn about “their cultural and natural patrimony.” 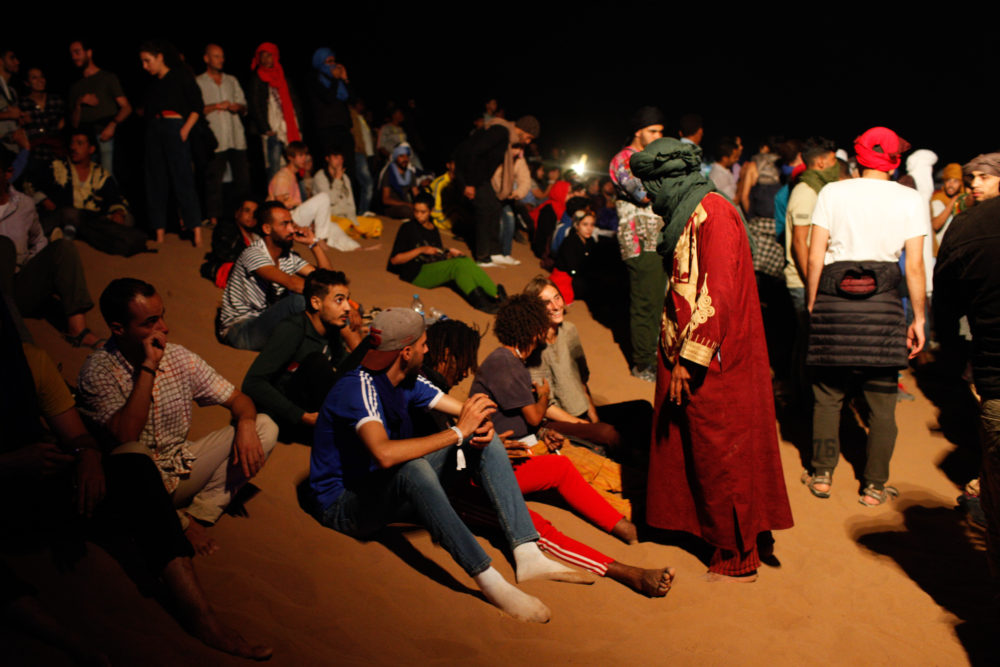 “Above all, it takes time,” he said. “You can’t get to know a place in two or three days. You need lots of time to understand it.” The festival lasts only for a weekend, but the hope is that people will keep coming back. I encountered not a few foreigners whose experience of the place was definitely temporary, surface-level and colored by fantasy. But a great many others were regular returnees or first-timers who immediately knew they’d be back. Many of the urbanite Moroccan attendees I met had never been to the desert, and wove deep, quick connections with it at the festival.

Now in its 10th season, Festival Taragalte seeks to celebrate that nomadic cultural heritage, preserve traditions, and contribute to the local economy. “Many people who live in M’hamid, they were nomadic at a certain time,” Sbai said. “Today, to organize an event in such a context makes us nostalgic.” 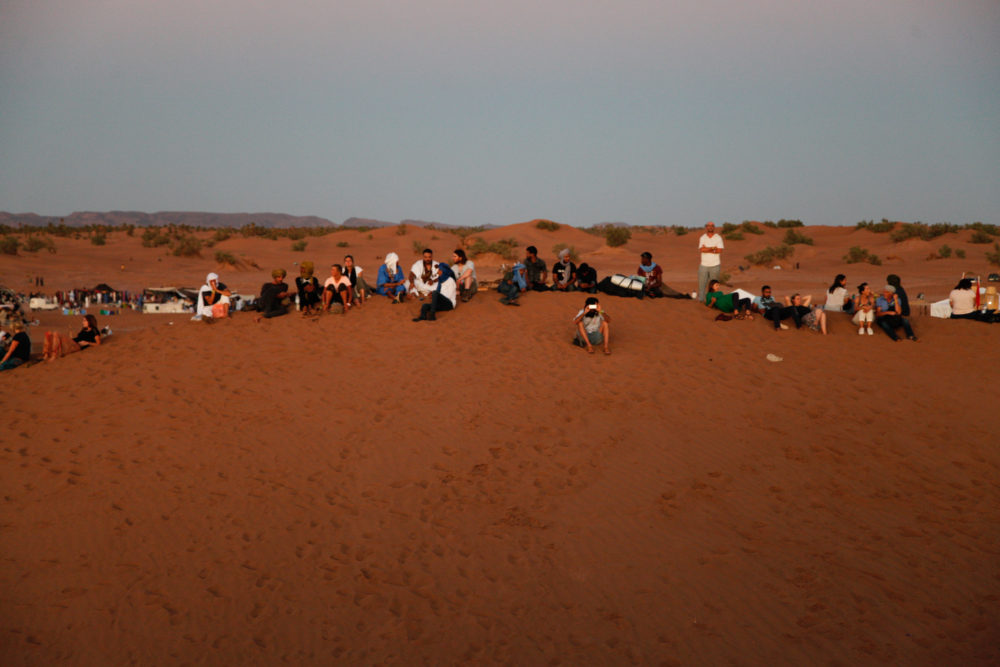 The festival crowd gathers for the sunset.

For Sbai, the nomadic spirit is about the meeting of cultures. The objective, he told me, is “to assemble the nomads.” Be they nomads from the Sahara or South America, Amazigh or Bedouin Arabs, he wants Taragalte to be a reunion of people beyond borders and politics.

It’s also a plea for the Earth. “We have a common point with all these nomads, and that is nature, an approach with nature,” he said. Nomadic culture, like desert oases, exists on the edge, fragile. If the land isn’t preserved, neither is the culture. Built into the festival are activities to combat desertification and workshops on sustainable water management. 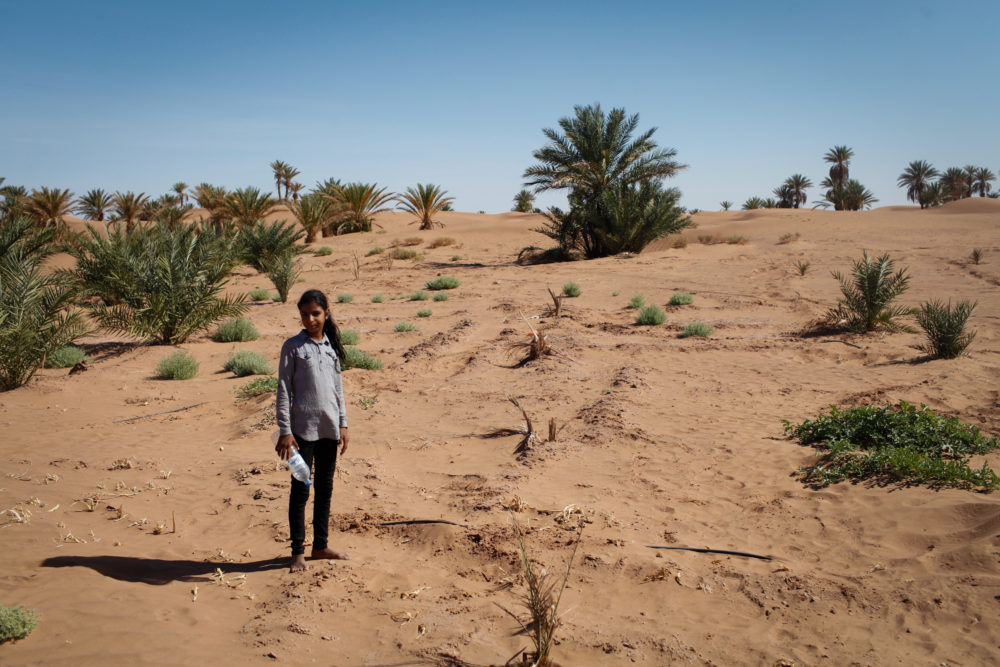 A girl from M'hamid stands amongst newly planted palms near the festival grounds, part of the efforts against desertification.

And, of course, Taragalte is a platform for the musical abundance of the Sahara. Since the first edition, local youth have had the chance to perform, hone their skills and form bands that have gone on to tour abroad. On the big stage, acts from Morocco and abroad drew thousands. 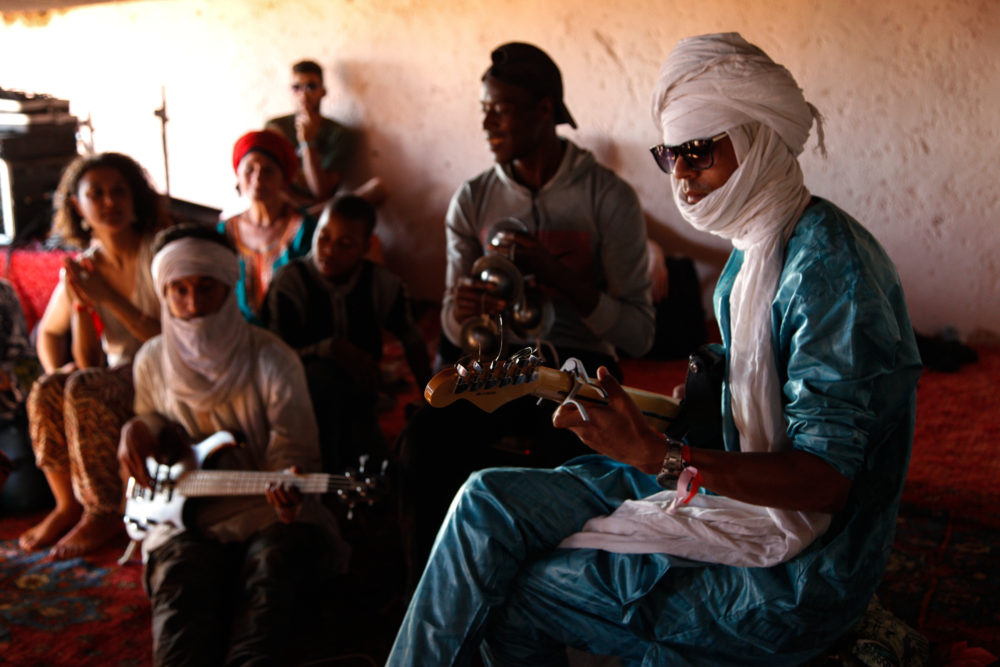 Young musicians from the local Joudour Sahara music school jam in the afternoon at Taragalte.

In Part Two of this report, we’ll bring you into the festival experience.