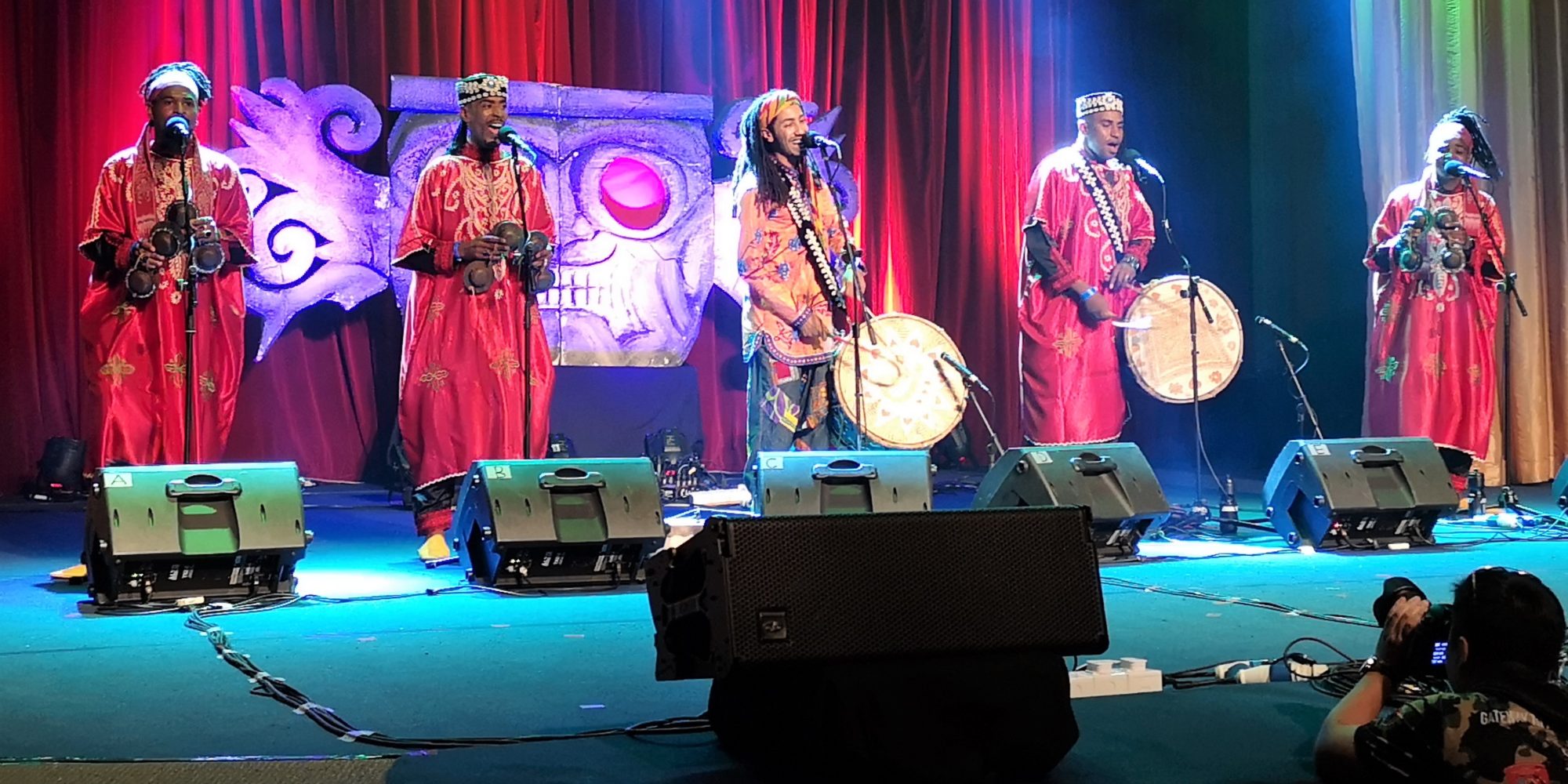 Over the last two decades , the Rainforest World Music Festival in Sarawak, Malaysia has become a household name among lovers of global sounds. There are a number of aspects which make this festival unique. The first one is the venue, the Sarawak Cultural Village in Santubong, about 30 kilometers north of the state capital city, Kuching. Malaysia consists of two parts: the peninsular one in the west between Thailand and Singapore and the insular part in the east on the island of Borneo, which Malaysia shares with Indonesia and the strictly Islamic sultanate of Brunei. Sarawak on Borneo alone is almost as big as West Malaysia and extremely culturally diverse with 28 different ethnic groups. The majority of the population belongs to the Dayak, the indigenous groups; then you have Malays, Chinese, Indians, Javanese and others. Sarawakians are predominantly Christian but there are Muslims, Buddhists, Taoists and followers of many other religions who all live peacefully together. 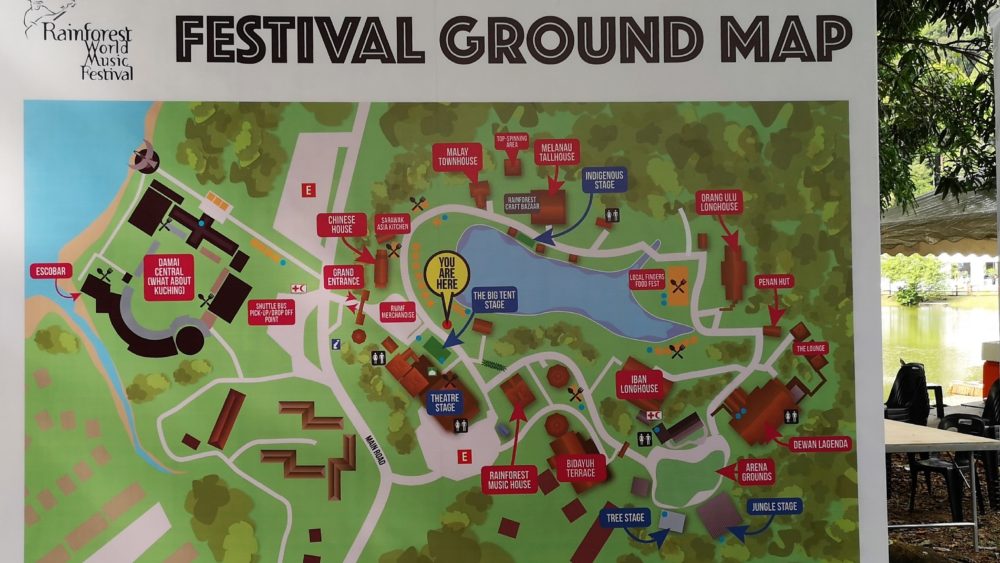 The Sarawak Cultural Village, located between the rainforest and the shores of the South China Sea, is an outdoor museum dedicated to all ethnic communities in the state. Traditional styles of architecture are on display: Most of these houses serve as venues for the Rainforest World Music Festival (RWMF), which was founded in 1998. Back then, there was only one stage where the artists played for about 300 people. Now it hosts more than 7,000 festival goers each day, among them many regular visitors not only from Malaysia but from the whole of Southeast Asia, from Australia and beyond. Before they go home, they often reserve their accommodation for the coming year. 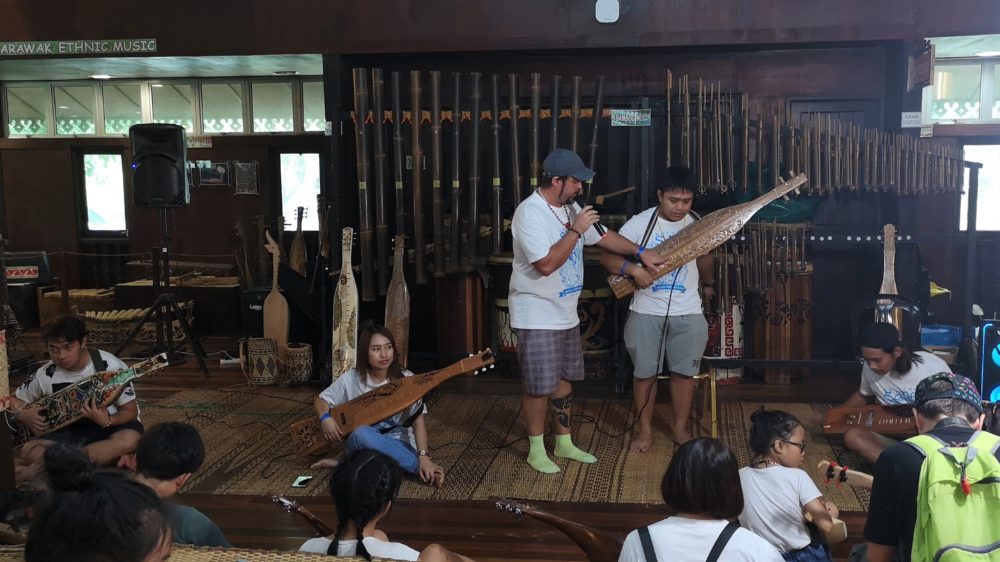 What makes RWMF so attractive, apart from the venue, is also the variety of music. Artists come every year from all continents and play both strictly traditional and contemporary world music with all variants in between. And while many festivals are just a succession of concerts, RWMF is much more. The festival day starts at 11 a.m. with cultural events that deal with, for example, bellydance, shadow boxing, Indian cooking or regional fashion. Then there are lots of workshops where you can learn to play traditional instruments like drums or the sape, the Sarawakian lute which had almost died out until it became really popular again some years ago. 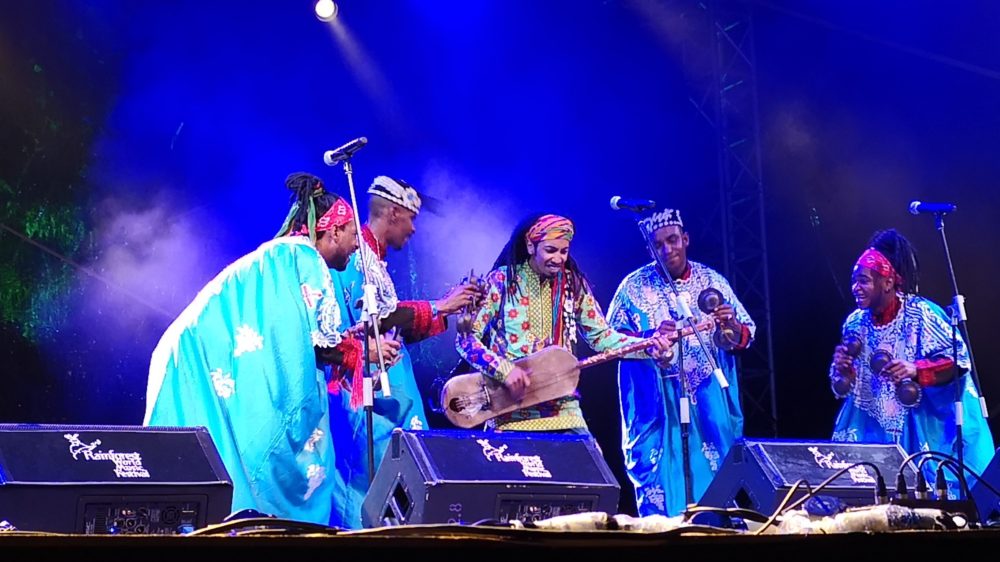 The so-called Mini Sessions bring together musicians from different parts of the world who mostly play the same instrument or related ones. Every artist introduces the audience to a piece of music from their own tradition. After that, everyone starts in turn to play another piece and step by step the other musicians join in. 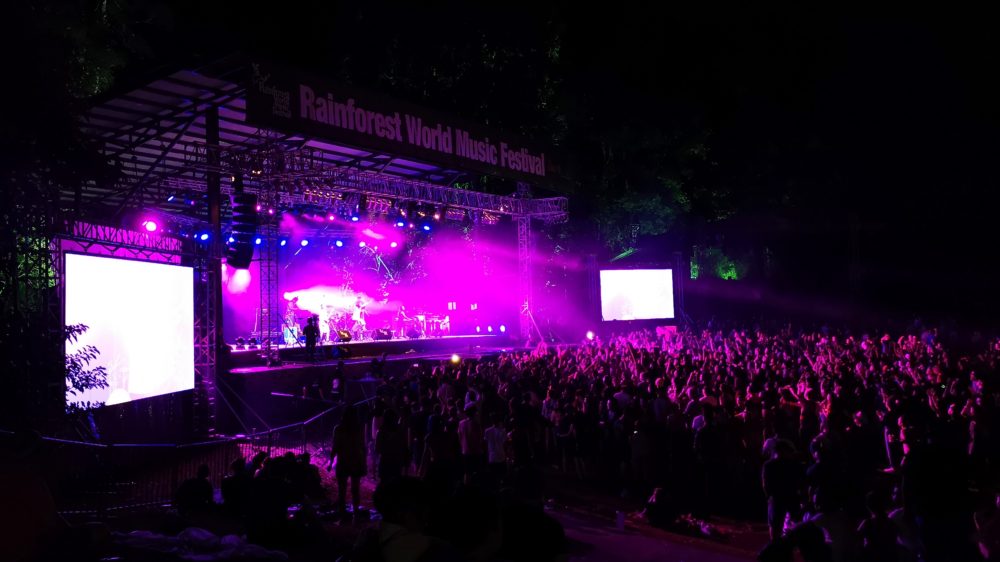 Welcome to the Jungle Stage

After sunset there are concerts on the two big outdoor stages located right next to each other: the Jungle Stage and the Tree Stage. African artists are always an integral part of these shows. This year, Mehdi Nassouli and his band represented Morocco's Gnawa culture with mesmerizing rhythms, great vocals and acrobatic dancing. They were definitely one of the most popular acts of the three festival days. Other African bands came from the continent's islands, places that played an infamous role in the European and Arab slave trade: Tabanka from Cape Verde (although they are based in Rotterdam), Rajery from Madagascar, and Mauravann from Mauritius. 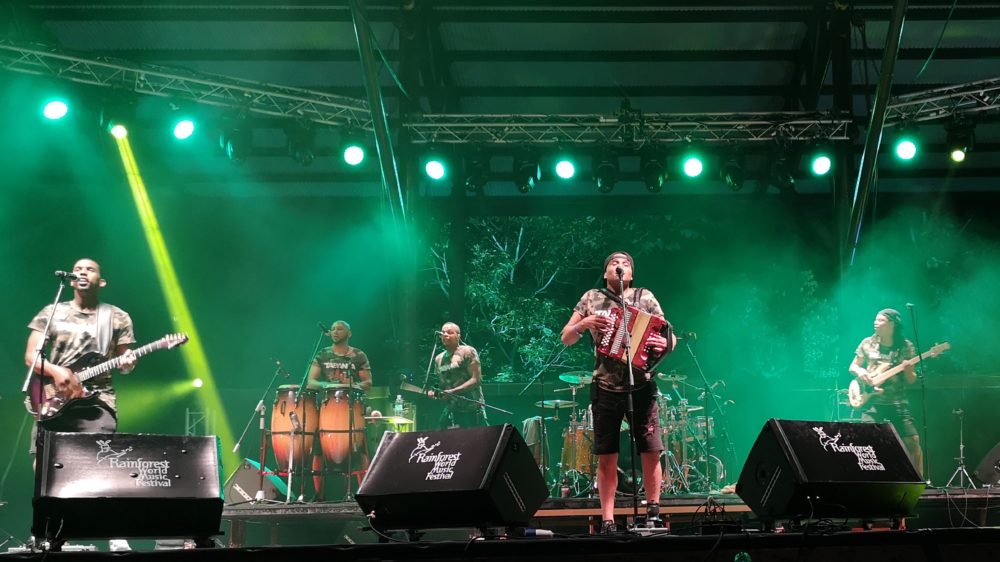 Rajery played one of the best concerts at this year's festival, although he had to perform without his guitarist, who could not travel with the band because he had lost his passport. Instead, Rajery was accompanied just by three colleagues on bass, drums and percussion. He himself plays the national instrument of Madagascar, a bamboo harp called valiha. Ironically, it has its roots in the Malay Archipelago from where Madagascar's first settlers came across the Indian Ocean between 200 B.C. and 500 A.D. During his youth, Rajery lost most of his right hand in an accident. Only a stub of the thumb is left. Therefore, he plays with six fingers instead of 10, which forced him to create his unique personal style. Apart from instrumental pieces, Rajery and his band also perfomed great a cappella vocals which reminded sometimes of a bit of South Africa, but then again there is a historic connection: Many of the slaves that the Dutch brought to their colony at the Cape of Good Hope were from Madagascar. Towards the end of his show, Rajery invited a colleague on stage whom he had met during his first participation in RWMF some years ago: the popular Sarawakian sape player Jerry Kamit, who brought another dimension to Rajery's music. 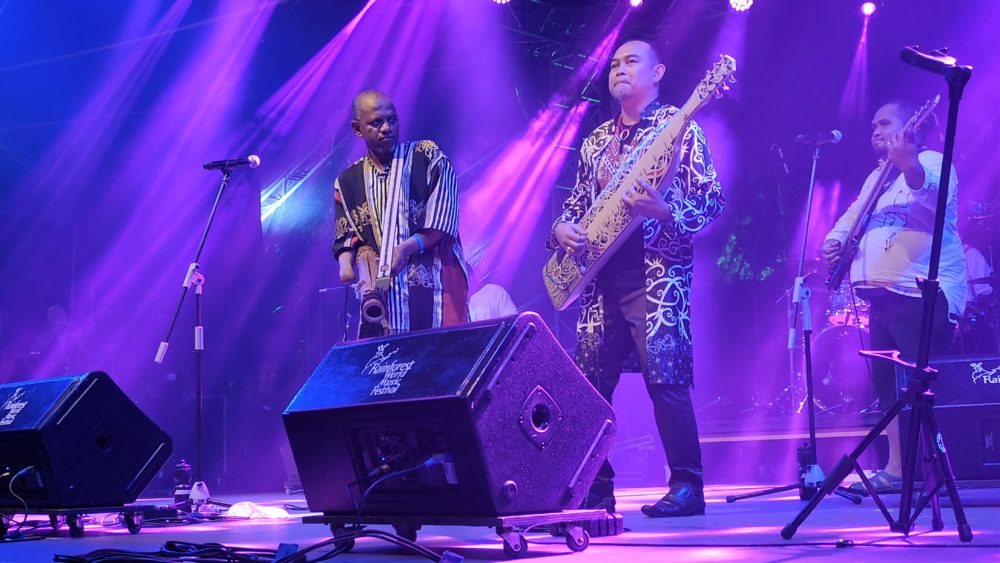 Another remarkable aspect of RWMF is the sustainability approach: The festival tries to avoid plastic garbage as much as possible. Due to the heat, people have to drink lots of water; however, it is not sold in bottles, but visitors can buy an empty bottle or bring their own one which can be refilled for free at several stations across the festival area. To encourage everyone to put the garbage that is generated anyway into the trash bins, they are decorated by local artists to make them look stylish. 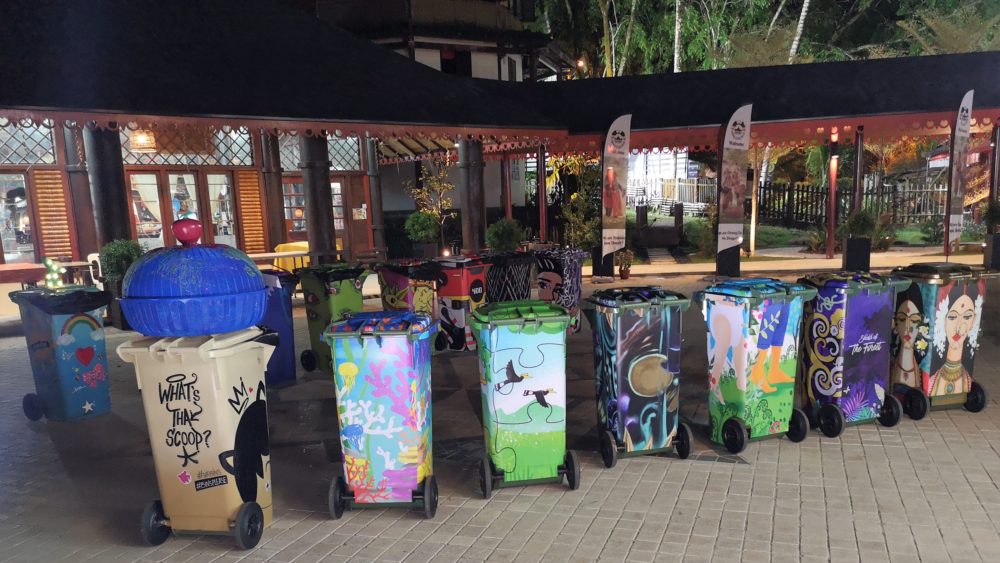