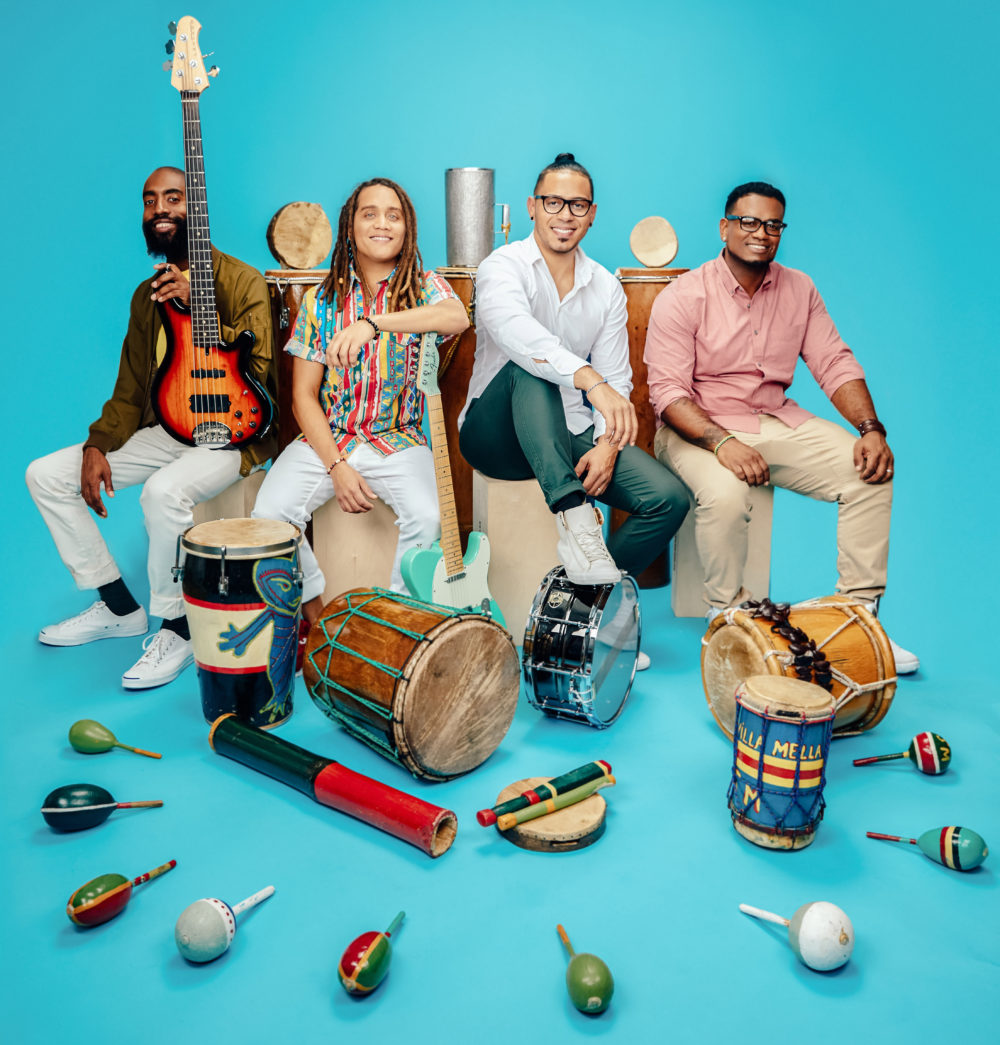 Yasser Tejeda, who we last heard from on the funky Afrobeat-meets-Afro-Dominican palo song “Nuestra Raices,” is back with a new instrumental piece that seems to bring together even more disparate threads.

In the interview below, Yasser laid out how he composed the song, but see if you can spot the influences here on "Del Otro Lado":

Having never heard anything quite like it, I emailed a few questions to Tejeda, and he promptly hit me back to explain how this is and isn't what I expected, and cited the influence of Luis Dias, veteran of the Afro-Dominican folklore scene.

The interview has been edited for clarity:

Ben Richmond: Geez, right from the start: O.K., what chord does that song start on [from your guitar]? It's a real shock to the system.

Yasser Tejeda: It starts with a F#mi9 ( F sharp minor nine chord ). The shock is probably because it comes all of a sudden after the bass intro. It comes in the upbeat with a furious energy along with the whole band.

The press release calls this your take on “gagá”—which is Haitian rara music that Haitians working in the D.R. brought, is that right?

It is actually not exactly gagá/rara. On the percussion rhythm, the melody part [A section] is a Haitian kongo rhythm. On the B part--the heavy rock part where the tambú (percussion) opens up and speaks is a style is called petwo--which is part of Haitian voodoo ceremonies. You can hear the maracas pattern on the melody part--that is called chachá in the rara and petwo style. Radá, petwo and gagá go together but are different rhythms and are played for different reasons.

What other influences are in here--I'll admit that I'm pretty hazy on gagá, but it doesn't sound much like the rara that I know!

Yes! You are right! This song is inspired in Haitian rhythms especially kongo, petwo and a bit of the feel of rara [in D.R., this is called gagá]. There are definitely other influences like jazz and rock.

This song has a big influence from Dominican folk rock master Luis Dias. He used to have two rock bands in the D.R. [Transporte Urbano and La Victoria ]. Both groups were power trios and didn't have percussion instruments. Luis Dias passed all the percussion rhythms to the drum kit, breaking up the rhythms, flipping it up, and making the drummer play it kind of backwards with the heavy rock guitar in the background. He would break up the rhythms to not make it so "obvious" --he decomposed the rhythms, passed riffs of the drums to the guitar, riffs of other percussion instruments to the bass etc. He called this "metaphorize instruments."

To be honest, I'm not as much into post-rock these days. In my early days as a guitar player, I used to play and listen to heavy rock and hardcore. I think that stayed in my blood forever. Rage Against the Machine was my number one go-to for guitar riffs. I used to know all their albums on guitar. I am not sure if these artists are considered post-rock but I was also into Mars Volta and the Omar Rodriguez Lopez group for a while.

You're combining at least two, if not more, genres together. What guides you as you compose? How do you reconcile these different things?

It's mostly jazz and rock with the spice of kongo and petwo rhythms. This song was inspired by how how Luis Dias [Dominican composer, folk-rock Dominican legend] used to arrange for his power trio.

When I compose I hear the melody first and I take that as my guide. I play it and then I figure out chords and the feel of the rhythm. Sometimes I just come up with a guitar riff and this makes me write the whole song. In this case specifically, the riff of the chorus was the first thing I wrote. Then I came up with the melody and the B part. After that, I get together with the band and work on the transitions, fills, and the percussion/drums rhythms. Since I've been playing these Dominican roots styles for a while, I'm starting to feel that I have them almost under my skin. As a guitar player and freelance musician, I perform a lot in the city playing r&b, church gospel, funk, jazz and rock. Somehow I now see them all together as a mix and that's what it comes out when I write for Palotré.

Anything we should be listening for on the new album (when is that coming out anyway?)?

The album is coming out on Oct. 11! The new album is a celebration of Dominican culture, the folkloric rhythms and traditions that have been kept alive from generations to generations for around 300 years. We take these traditional rhythms/styles and study them, internalize them and make fusions with a fresh twist of our influences to develop a different type of "Dominican fusion" music. We are looking to share our culture with the world, show what we can do with it and see that in the end we are all the same.

Hip Deep August 10, 2017
Afro-Dominicana: The Other Dominican Republic
This week, Afropop revisits the home of styles such as merengue and bachata, but this time we’ll be looking towards the most deeply African side of Dominican music—little known outside of the island.