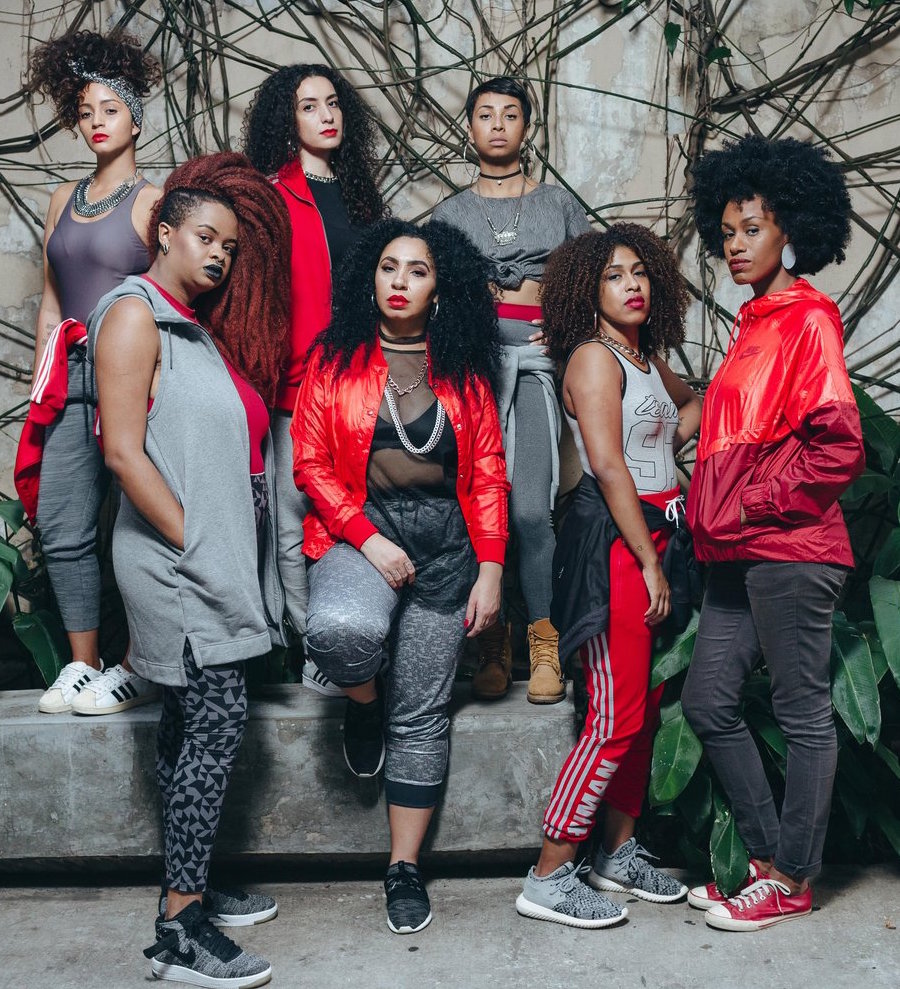 This is the eighth feature in a series we call “Fresh Cuts.” It’s a selection of newly released tracks and videos from across Africa and the diaspora, featuring established and up-and-coming artists and everything in between. It’s been a bit of a wait since volume seven, so we’re including some tracks that were released several months ago but still retain their freshness. Today we’ve got, among other things, unbridled Ghanaian dance beats, fierce Brazilian hip-hop, Sudan-inspired electronic violin experiments, colorful Colombian dance fun, suave Afrobeats and soulful grooves from London and Dublin. In case you missed them, also check out our previous “Fresh Cuts.”

Here’s the full playlists of this music (be mindful that these won’t include every song listed here due to the variety of platforms artists are using to share their music). Scroll beyond to read about the artists and watch the great music videos. Enjoy!

J Hus is no joke. He’s an East Londoner of Gambian origin who, after several rough and tumble years of youth, has been crafting a much-loved, brilliant mix of hip-hop, grime, Afrobeats and dancehall. His rich rhymes pair with impeccable, full-bodied production to stunning effect. If you dig it, we recommend you check this interview with J Hus on Fader. Also be sure to check the A+ whole of his recent album, Common Sense.

Bomba Estéreo has the most fun. This technicolor, Colombian tropical-electro-cumbia band cranks out the hypest, hippest, funkiest tunes again and again, like the smash hit “Soy Yo” or this year’s “Duele.” Here’s a recent video for the song “Internacionales,” in which a bummed-out, sheltered travel agent breaks out and goes on a roller skate world tour, joyfully rolling across continents. Over Simón Mejía’s thundering, sparkling reggaeton-rooted beats, Liliana Saumet sings a radiant song of unity across all borders in a good dance party.

Some ethereal, intimate, experimental sounds from the American musician Brittney Denise Parks, who goes by Sudan Archives. This adventurous violinist and singer crafts strange, lush sonic textures that layer vocal harmonies, big synths and heavy beats with samples of violin, claps, snaps and small, knobbly sounds. After a childhood of playing violin and other instruments, she came across the sounds of Sudanese violin, which she then adopted as an inspiration. She fuses this folk style with electronic instruments and sampling on her debut EP, Sudan Archives, released on Stones Throw Records.

The French-Cuban twins Naomi and Lisa-Kaindé Diaz, known by the Yoruba word for “twins,” Ibeyi, are in touch with something real deep. The sisters are in tune with each other to the fullest. Every time they join their creative spirits to make a new song, it is inevitably a gorgeous, moving piece of work, full of their singular sound at the juncture of sparseness and richness, joy and darkness. Since they came on to the scene a few years ago, they’ve been putting out phenomenal records and putting on stunning live shows. They’ve already made two appearances on our “Fresh Cuts” mixes and now they’re back with a track from their recently released album, Ash, which is 100 percent gold. This song is a unbreakably defiant, hopeful anthem to resilience and power in the face of a world tries to break you down. Saxophonist Kamasi Washington adds his horns to the fierce shout of the chorus, as the sisters give birth to each other on an infinite loop. Another recommended track: “Me Voy.”

Have you heard anything hotter this week? This track from the recently formed Brazilian all-female hip-hop supergroup, Rimas e Melodias, is one of the best finds of the month. The seven-person crew, who you can see in the video taking turns at the mic, is comprised of rappers, DJs and singers Tássia Reis, Drik Barbosa, Tatiana Bispo, Karol de Souza, Stefanie, Alt Niss, Mayra Maldjian, all of whom have had solo careers of their own. This song, “Origens,” is the title track of their recent debut album. Over the course of the song, each woman speaks to her own origins: her childhood memories and the ancestral and spiritual histories of her family, as the instrumentals shift appropriately to incorporate musical elements relevant to her identity (like the sound of an Armenian duduk in Mayra Maldjian’s closing segment). For example, Drik Barbosa’s lyrics sing about Candomblé orixas and samba music, and Karol de Souza sings, “Sou Portugal, Itália e provavelmente Angola/Sim, eu sou cria da Umbanda…/Budismo e herança africana, correm no sangue da curitibana,” which translates roughly to “I’m Portugal, Italy and probably Angola/Yes, I’m a child of Umbanda [a syncretic Afro-Brazilian religion]…/Buddhism and African heritage run in the blood from Curitiba.” Treat yourself and take some time to listen to the whole album – you won’t regret it.

We’ve been loving Fehdah, a young Sierra Leonean-Irish “astrophysicist/singer/producer” and leads a tight band playing music she calls “future rhythm and Afro-soul.” In between her gig teaching astrophysics at a Dublin university, she puts together these gorgeous, soulful, polyrhythmic grooves and melodies in a form echoing her artistic soulmates and occasional stagemates Thundercat, Hiatus Kaiyote, Yussef Kamaal and Tank and the Bangas (with a bit of tUnE-yArDs thrown in). Those brainy funk grooves, impressive guitar work and lush harmonies interweave with influences from classic Malian musicians like Oumou Sangaré. Check this sweet live video of one song, “N’Saheli,” which proudly bears this Malian vibe. She recently released an EP, Like No Other.

Here’s a recent jam from Nigerian Afrobeats star Olamide. Shot in the streets of the singer’s home neighborhood of Ladi Lak in Lagos State, the video features some absolutely fire dance moves to its infectious, darkly textured beat and Olamide’s slack flow. It also apparently featured enough cigarette smoking (very little) to get it banned by Nigeria’s National Broadcasting Corporation, along with songs by Davido and 9ice. In a curiously targeted instance of government censorship, the NBC stated that the video violated the Tobacco Control Act of 2015, which aimed to clean the air by banning smoking in public places. Said the Federal Ministry of Health: “This is our position: video contravenes the act. Innocently or otherwise Tobacco Promotion Advertising Sponsorship is banned in all forms.” Of course, it feels safe to guess that this statement has only inspired even more views (currently some six million on YouTube).

Listen with caution! This song may cause you to erupt spontaneously and uncontrollably into dance. You may begin writhing on the ground or vigorously dancing hard up against cars, people, buildings, the ground or literally anything else. This piece of unstoppable, possessing hype-ness is from the Ghanaian musician Patapaa, hailing from the marginalized town of Swedru in the central region, where an infectious, unrestrained dance craze emerged to the beats of this song. Like many new, unrestrained dance crazes that defy conservative social norms, it has been a source of lots of debate in Ghana, being demonized by religious conservatives and elites as a disgrace–even demonic. On the other side, it could be seen as a welcome release for young people coping with daily struggles. Read a thoughtful article on the debate here. If you’ve got a minute, enter into this YouTube hole to watch the endless cellphone videos of people around Ghana and Nigeria joyously dancing the “One Corner” dance, from people on the street to a whole platoon of Ghanaian soldiers dancing up on each other. Is it only a matter of time till “One Corner” takes on the U.S.?

Burna Boy is a consistent favorite in the Afropop office. He turns out regular jams with laid-back, minimal, body-temperature grooves overlaid with his honey voice loosely singing catchy, Auto-Tuned melodies. For some reason, though, Burna Boy doesn’t get the same kind of love afforded to other Afrobeats stars like Davido, Wizkid and the like. We still love him. (Another Burna favorite: “Pree Me”)

In case anyone was concerned that roots reggae is disappearing as dancehall takes over the world, Jesse Royal is a reassuring presence that it’s still going strong. The Jamaican reggae man recently released a full-length album, Lily of Da Valley, which has an abundance of heavy roots tracks and its fair share of dancehall flair, like “Generation,” featuring Jo Mersa Marley. The lyrical content spans from light, romantic fare to big, heavy matters like in this track, about slavery and reparations.

Check this jam from the Ivoirien rapper Gui Ange Emmanuel, A.K.A. Suspect 95: a feel-good, love-y vibe with a laid-back Afrobeats groove.

Dig this new, supremely catchy bit of lover’s rock from the British pop singer Estelle (made famous for her collab with Kanye West on “American Boy”) and the Jamaican singer Tarrus Riley.

This track is a “love letter to Paris” from the German-born, Nigerian-Roma singer Ayo. Afropop’s Banning Eyre sat down with Ayo recently to talk about her fifth, self-titled album–you can learn a lot about this fascinating and passionate artist in that interview. In this song, she sings an ode to Paris or “Paname.” She says, “Basically paname is a slang word for Paris; Gypsies call Paris Paname. I always say Paris is the Champs d’Élysée, Place Vendôme, and all the beautiful areas…But Paname, that to me is the real Paris, the African Paris. It’s the 18th, the 10th, the ninth district, these districts where you find people of all colors.”