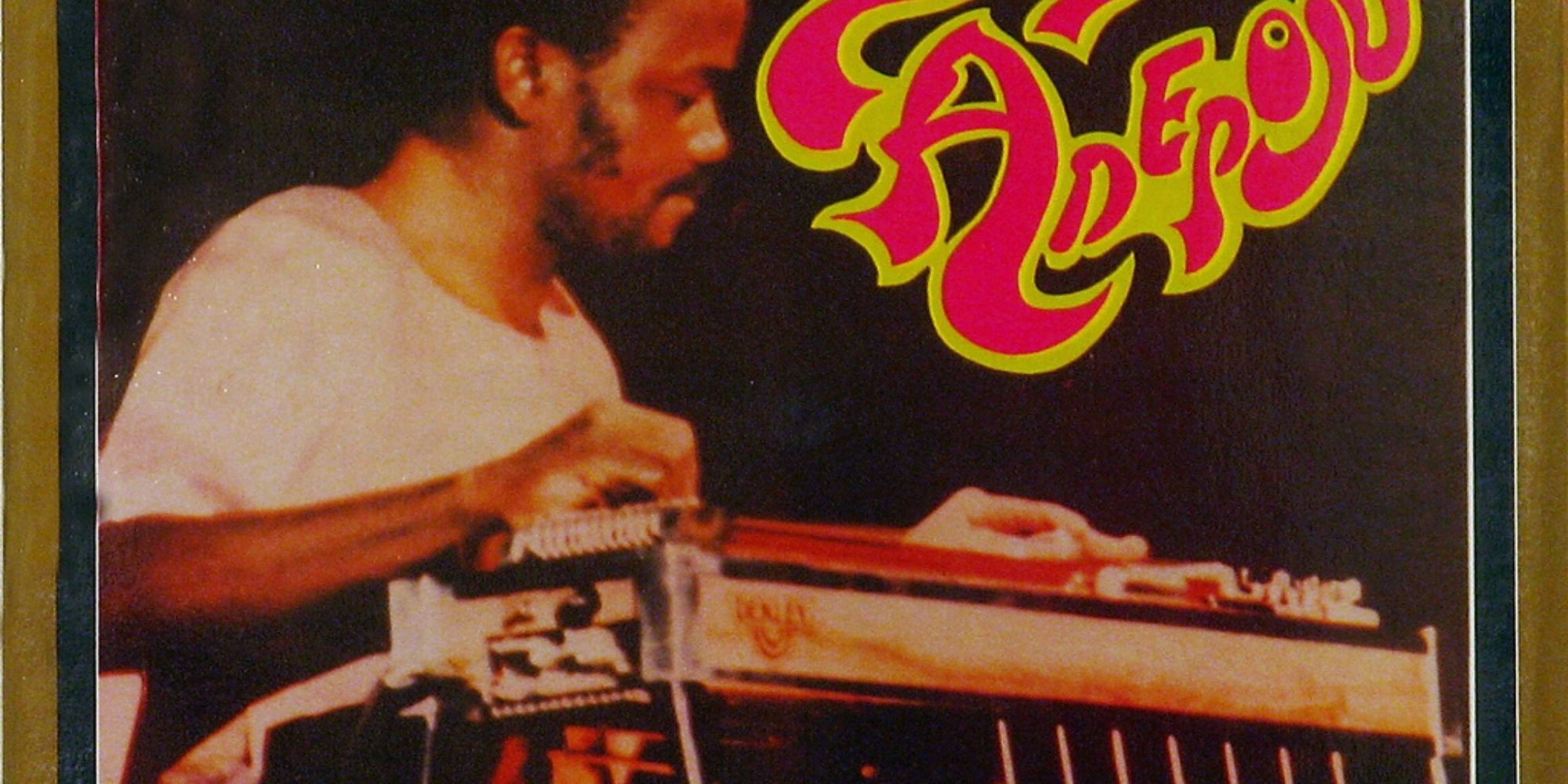 Blog October 5, 2017
From Hawaii to Nashville to Lagos: A Pedal Steel Primer

Pedal steel is one of the world’s most unique instrument. To play one, you need to use both pedals and knee levers, all while plucking the strings and sliding a metal bar called the steel. It’s most well known for its role in country music, but the history of the instrument actually dates back to Hawaii, where the pedal-less lap steel was developed back in the late 19th century. And while Nashville is still considered the center of the pedal steel community, in late ‘70s Nigeria, the pedal steel sound became a signature component of the juju genre. As part of our new “Accounting for Taste” program, we look at the instrument’s rise to prominence in Lagos. Here, we trace in more detail the strange path of the pedal steel and its surprising ties to Africa.

Joseph Kekuku is widely (though not conclusively) considered the inventor of the Hawaiian steel guitar. According to a 1933 article by steel player Ken Kapua (from Lorene Ruymar's The Hawaiian Steel Guitar and Its Great Hawaiian Musicians), when Kekuku was 11 years old in 1885, he picked up a bolt while walking along a railroad and slid it on the strings of his guitar, producing a rough version of what would become the lap steel sound. In 1904, Kekuku left Hawaii for the mainland US and eventually Europe, where his “Birds of Paradise” tour was a major success and led to two Hollywood films. His success, along with that of traveling Hawaiian tent shows, helped introduce non-Hawaiians to the steel guitar sound. Few, if any, recordings of Kekuku survive today, but you can hear his influence on other early Hawaiian steel performers, like Sol Ho'op'i.

The first major innovator of the pedal steel was Alvino Rey, a big band leader. Rey experimented with ten different tunings of the steel guitar, before hiring machinist John Moore to come up with a system to change the tuning more practically in 1940. The new instrument, originally called an electraharp, connected an eight-string neck to six foot pedals. In this weird piece of history from 1944, Alvino plays "St. Louis Blues" with Stringy, the Talking Steel Guitar.

The next big step for pedal steel came in 1953 when Bud Isaacs played on a song called “Slowly” by Webb Pierce. For the first time, Isaacs stepped on his pedals while his strings were reverberating (previously, the pedals were just used to change tuning). The song spent seventeen weeks on top of the country & western charts. Steel players desperately tried to emulate the sound by drilling holes in their instruments and hanging fish wires.

From that point onward, pedal steel became a central part of the country music sound. The instrument is featured in big hits by Dolly Parton, Johnny Cash, Merle Haggard, and just about every other country superstar. Some of the biggest legends in the pedal steel world are Buddy Emmons, Lloyd Green, Jimmy Day, John Hughey and Jeff Newman. These guys perfected their technique of the pedal steel, which is a notoriously difficult instrument to learn. As American steel player Mike Perlowin said in an interview with Afropop, "It’s a beautiful instrument. It’s a challenge to learn. It’s really fun. It makes standard guitar look like a child’s toy in comparison. The most difficult thing about it is understanding it. Somebody, not me, came up with the analogy that learning to play is like rolling a boulder over a mountain. You’ve got to roll it uphill first. And then at one point you just give it a shove and it rolls downhill by itself. And that’s the point where you say, 'Oh! I get it.'"

It takes decades to really master the pedal steel. So it would come as a shock for many steel players in the '70s to hear the instrument played by a man who had invented his own unique technique in a style miles away from Dolly Parton records. In 1977, pedal steel appeared for the first time on a juju record: King Sunny Ade and His African Beats’ Syncro Chapter One. Demola Adepoju was credited with playing the "Hawaiian guitar" on the album. According to Perlowin,

"Demola’s first exposure was to the non-pedal steel. He was in Lagos where he lived. And somehow he heard a record of Hawaiian music, which uses the non-pedal steel and he thought, ‘I want to learn to play that instrument.’ What he told me is he scoured the docks, because Lagos is a seaport town and he asked sailors if any of them had a Hawaiian guitar--very specifically Hawaiian. And eventually somebody did and he bought it. He taught himself a few licks in secret and he was playing in some amateur band and they were doing some battle of the band and they were not doing particularly well, so he ran home, grabbed his lap steel and started playing his Hawaiian steel, not pedal, on a few licks. And nobody had ever heard that sound before. So they consequently won the Battle of the Bands. Now, the way I understand it, somebody brought him to the attention--not first of King Sunny Ade, but Ebenezer Obey, King Sunny Ade’s competitor, and he said no. And then they brought him to King Sunny Ade and Sunny Ade said, 'Let’s try it.'"

At the time, Obey and King Sunny Ade were the two most popular juju leaders in Nigeria and were fiercely competitive with one another. Both Obey and Ade experimented with adding new instruments to distinguish their sounds--Fender Rhodes and synths, among others. Ade took a chance on Demola, and he bought two pedal steels in England, which he brought back to Nigeria for Demola to play. Ade also wanted to emulate the slide sound of the traditional Nigerian violin or goje, which he felt was missing from juju. So pedal steel was, in a sense, a natural fit for juju, while it also added a new, almost otherworldly sound to the music.

In 1982, many Westerners first heard juju, when Island Records released King Sunny Ade’s Juju Music. After the death of Bob Marley the previous year, Island was looking for another international superstar. While Ade would not ultimately match Marley’s success, Juju Music did introduce many to popular music from Africa for the very first time. Featured prominently on the album was Demola’s heavenly pedal steel. It was a style completely his own. Demola taught himself his own technique, so it sounded nothing like American country pedal.

Later on, pedal steel also made it into fuji, the genre that first gained popularity with a more working-class Islamic audience. Though fuji was originally played with traditional instruments, by the late '80s and early '90s, innovators like Kwam (King Wasiu Ayinde Marshall) and Chief Doctor Sikiru Ayinde Barrister began adding instruments like the saxophone, keyboards, and eventually, the steel. Here’s the fantastic “Refined Fuji Garbage” by Barrister, one of fuji’s greatest icons.

Pedal steel has since drifted out of style in Nigeria. Today, you’re much more likely to hear rap or Afrobeats than the strange sliding sound of the steel in Lagos, but its legacy lives on in classic recordings by Demola and other Nigerian steel masters. Here is “Moji” from Demola’s only solo album, Olufe-Mi.

Thanks to Andy Frankel, King Sunny Ade's former tour manager, and Mike Perlowin for their help with this primer. Mike is an LA-based pedal steel player, who met Demola when King Sunny Ade toured the US. He played mandolin and autoharp on Demola’s record. After years of playing on the country circuit, Mike now makes pedal steel recordings of classical music. You can check out his tracks on Soundcloud and visit his website here.