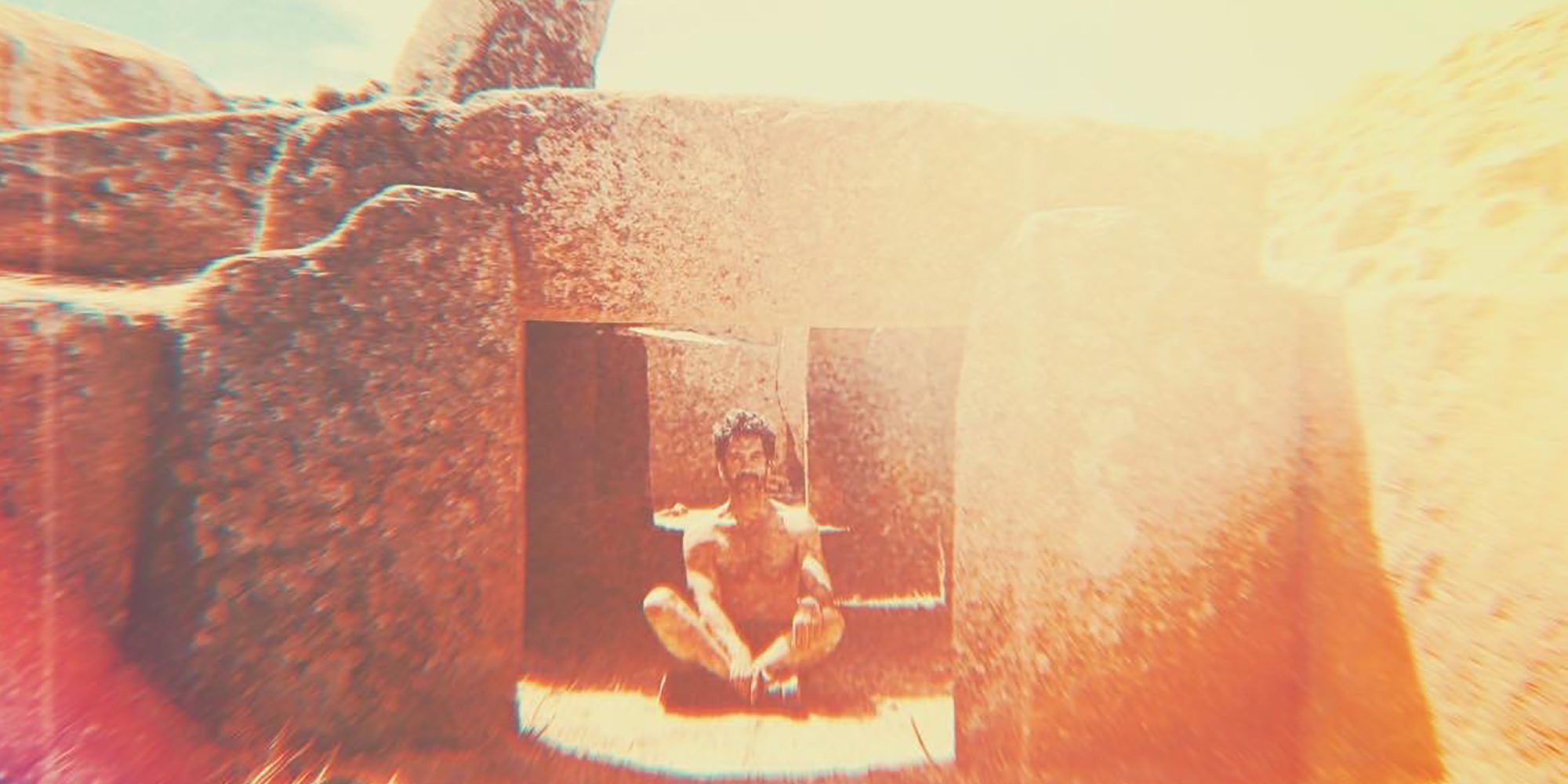 There are few things we love more around here than Tuareg and cumbia guitar work—and to judge from the latest EP from Gitkin, he feels the same way. The Wonderwheel Recording artist followed up his excellent 2018 LP 5 Star Motel with the De La Canción EP, a two-song, two-remix exploration of two of the most vital styles out there today. He promised that his upcoming full-length is going to have more of both and plenty of surf too.

Last week, Afropop's Ben Richmond called up Gitkin, who was professionally known as Brian J in his other gig fronting the Pimps of Joytime. They chatted about the new EP, favorite Tuareg musicians, and how “wherever you go there you are” applies to artistry as much as anything else. Why not give De La Canción a listen while you read the interview?

Ben Richmond: Why don't you just describe the new release that came out on Friday, in your own words?

Gitkin: Well, I expanded on my original foray into international funky music. It's international-tinged with a rural funk vibe in it. And the EP is centered around two songs.

The first single is called “De La.” I wrote with Carol C. And it's heavily influenced by Tuareg guitar style from the Sahara. I've been listening to that music for a long time and I've got to work with and jam with Moctar this summer, which was cool. And you know, I also got deep into Hill Country blues because I produced and performed a record with Cedric Burnside. So I've got deep into that vibe and that North Mississippi vibe is definitely connected with Tuareg. So that was, you know, running deep and Carol sings kind of in an African style, but the lyrics are in Spanish. So it's a cool hybrid of styles happening.

And then the second song is a little more kind of like a cumbia, you know, kind of a celebratory sound. I've been influenced by chicha, which is the sort of psychedelic guitar music that came out of Peru in the '70s and then it had kind of a resurgence. So it's got a little of that flavor in it. And I have an electric 12-string guitar, which sounds a bit like a hybrid electric guitar the way I do it—because a 12-string is basically double strings like, you have a note, and it's doubled [up an octave], but I make them a little out of tune, which gives it a little more of a sound of like maybe a saz or like, you know, just a little more evocative and to me sounds a little more exotic.

Gives it a little more texture, I guess

Yes. Yeah, more than a standard electric guitar sound. But that song, you know, just seems like happy, uplifting-grooves music.

When I started the project in 2018, I had never really done instrumental music up until I worked on and produced a record for Bernard Purdie. So I wound up working with this cat, Pete Chand, from New Master Sounds and we wrote instrumentals. That was like the first time I ever wrote instrumental music. And I got like an eight-track tape machine and as a little experiment, I just kind of started writing instrumental music, not with the idea of starting a project. But then it sort of started gaining momentum. And I thought it could be good for licensing like hopefully music for movies and that. And then once Wonderwheel wanted to release it, it was like "oh no, this feels like a project." And then I put a really great band together.

And that's the origin of the Gitkin project?

Yeah—I wanted to make music that didn't sound like me. I kind of got tired of what I sounded like on guitar. I wanted to try to make music that just is like the opposite of what I'd normally do. And then, of course, what I discovered was that was just another part of me that hadn't been developed. It was a good exercise. And now, you know, I kind of opened up a whole new pathway and sort of a new sonic character, tonal character, you know, bringing in the Middle Eastern influence and North African influence and the cumbia—its been really fun.

So thinking about making music for different purposes, made you want to try different styles as you were composing?

Yeah, with the idea of just doing music that is different than anything I've done. You know, I've done more song-based and just American funk--that was had really where I was at--and then I was getting just deeper into Middle Eastern tonality, which I really never messed around with. So that just felt new and just different. At first I'm like, "that doesn't even sound like me," which I liked. And then it sort of became another side of my musical character. And then, you know, the significance of “Gitkin” is that it's my actual last name, which I kept out because I had always gone as Brian J and I left the Gitkin part out of it. But, you know, I hit a part of my life where I'm like, you know what? I think I'm connecting, especially because there was sort of a through line of this is like music of immigrants, people that came to America from all parts of the world. And that's how I received the music and that's also my story. My grandparents came here as immigrants. And so there was an element of connecting to that at my own roots.

The more you try to get away from yourself, you find you're there, too. “Wherever you go, there you are.”

Yeah. Sort of like the original aim of "Let me just make something that doesn't sound like me," actually led deeper into my roots. So the whole story started unfolding without me even really being aware of it.

And you said you jammed a little with Mdou Moctar, but what would you say was the gateway to you getting into Tuareg music?

Well, you know, I love Ali Farka, you know, all that amazing stuff that came out in the '90s—Amadou and Miriam, Ali Farka, especially when the album The Source came out, I was so blown away by that stuff. It was life changing. And then I kind of went on all these other musical adventures and then with Tinariwen, when they released Elwan in 2017. I mean, that is just such a perfect album. It sounds so good. It's rugged. It's got the rugged guitar sound—Ali Farka Toure has a clean rolling jazz chorus tone and then Tinariwen gets more overdriven grimey dirty sound which just totally resonates with me.

I have this playlist I made on YouTube that just has like field recordings, of people in the thick of where the music comes from, you know, people doing like wheelies in the desert with a pickup truck, and popping off hand guns, and just did it for me: It's like, oh, this is the best guitar playing in the world is coming from this part of the world. Without a doubt they've reinvented the instrument with their inflections and that style. To me, it's blues, but it's what they're doing with it. It's a beautiful thing. Like, you know, the way like, say, Jimi Hendrix or Chuck Berry, these people changed the way that the instrument was used. I feel that there's a handful of these cats from that part of the world that are doing that with such a gorgeous style.

Can you articulate what elements and sounds you go to when you're trying to put together a Tuareg song? What sort of things are you consciously thinking of?

Well, it has like a trancey vibe to it. It's like mimicking the elements of kora and the way the kora is played. It's just what's in people's ears. So they try to recreate it on an electric guitar.

But I really I just listen to the music and I feel it. There's a connection with Hill Country blues from north Mississippi. That also was like focused on one key. It's very rhythmic. It's a very deep trance, deep pocket. So it's maybe just technically a little different. But the spirit is really some kind of odd connection. And they put out an album called Mali to Memphis or something like that years ago, that had Malian musicians so not I'm not the first one that's come up with that idea.

I think Ali Farka Toure heard something familiar in the blues—something in that pentatonic tonality. It is really interesting to hear that and feel like there's a kinship even when you've been learning something else, to find other skills that are in your skills.

O.K., same question for cumbia: what led you into that?

I should learn the real origins of it. I'm sure somehow it was influenced by Africa. It seems like that's part of my life's mission. I just get attracted to like African music that goes through different filters and then you get like reggae or you get Afrobeat, you get American funk, New Orleans funk.

But, you know, I'm not a musicologist. So, you know, this stuff, this is just my feeling now.

And with cumbia there's a fun sort of crossover to where it feels like a Western, you know, kind of Western like "on the range" or horse music or something like that. There's like a little cross over there that's kind of fun. And then the other element, which I have for the new album—the EP is just a few songs off it—but I kind of really got into surf music and my understanding is surf music also has the Pakistani or Middle Eastern roots are in there. So it's been fun to play with that.

Yeah definitely something in those modes, at least with Dick Dale—his dad was Lebanese.

Yeah—it's cool that what we call surf music actually has that Middle Eastern feel to it. And it's another one of the things that has I started playing with it and writing some songs. It's really fun. And it kind of makes you want to keep doing it.

Well, if you already have the reverb on the electric guitar sound down you can move between all three of those things without having to change your whole lineup!