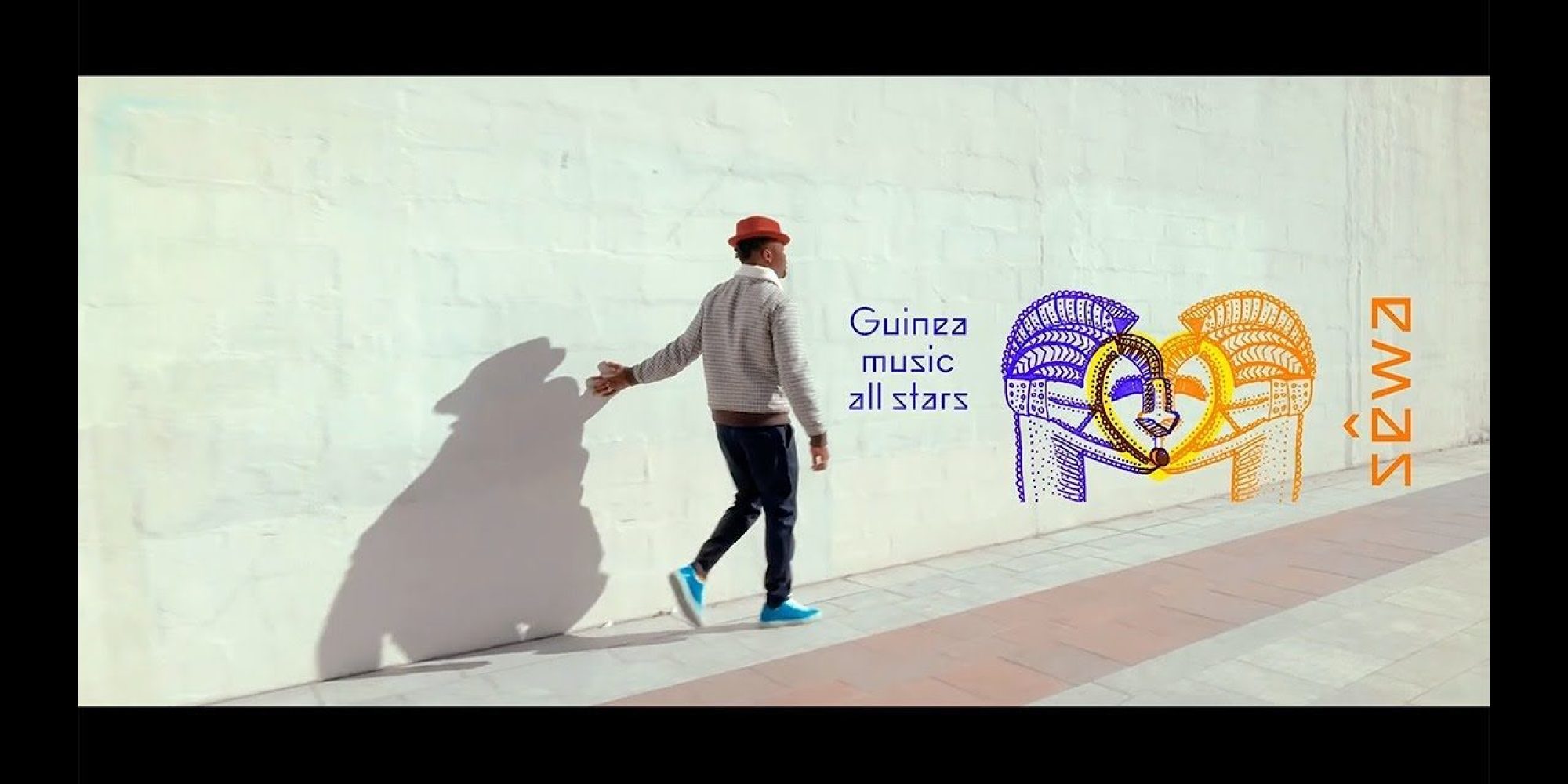 Moh! Kouyaté, as his last name signals, comes from the griot family of Kouyaté, which has included Bembaya Jazz National group leader Sekou “Diamond Fingers” Kouyaté and Salif Keita's guitarist Ousmane Kouyaté. Born in 1977, as the legend goes, Moh! began playing the guitar when he broke a string on his father's guitar and his father decided he better teach the boy some chords. Eventually, he started a band, Conakry Cocktail, along with kora player Ba Cissiko. One day he was turned on to an album of guitarist George Benson, which led him into a deep dive exploration of Western guitarists from Django Reinhardt to Carlos Santana. In 2004, he met American blues musician Corey Harris (who had previously worked with Ali Farka Touré on Martin Scorsese's 2003 Blues documentary) and the duo wound up touring the United States and Europe together.

In 2007, Kouyaté moved to Paris where he and Ba Cissiko joined Fatoumata Diawara's band. His first solo album, Loundo, was released in 2015 and his second, Fe Toki, in 2017. On both albums, one hears a confident performer who has fused his many influences, dynastic history and life experiences together.

But as far back as he can remember, Kouyaté says, he has had this desire to honor his elders by forging a bond between them and today's generation of musicians, cementing a continuity of Guinean musical tradition to the present and beyond. To realize this dream, he called up one of Guinea's greatest artists and fellow griot, Sekouba “Bambino” Diabaté, and the two began to collaborate on the creation of the Guinea Music All-Stars, a project that would bring together senior and junior Guinean musicians. They recorded an EP and were ready to tour in 2020, but the pandemic waylaid them until now.

We sat down with Moh! after the band's electrifying set at Germany's Wurzburg Africa Festival in May to have a chat about this new project.

Ron Deutsch: You have said this project has been a dream for you. Tell me about the dream.

Moh! Kouyaté: It's been a long time coming. It was something coming from my heart and mind to make this kind of project to speak about Guinea and to show Guineans – and the people of the world – to mix some different generations of artists together to make something new. You know Guinea was the first country to have its music heard everywhere in Africa. Bands like Bembeya Jazz National, Keletigui, Bala [and his Baladins], and then every other great band from Guinea cleared the path for us today. So that was the goal.

I would say I've started to become an older member of the new generation. I'm 45 now. And you can find an even younger generation of very great musicians and singers. For me, to follow the culture and history, I was here for that so I know about the history. I saw those great musicians who played the classic instruments – the balafon, kora, n'goni – a live band, with live music. The newer generation, they have their own ideas, like with computer music. Today, everything is done in the studio. While some of these younger people know the older music, not all do. I wanted to create a bridge so they can look back and see that they are part of something bigger. That's my vision. You have to keep connected to the source.

In fact, it was at my last concert here, I talked to Stefan [founder of the Africa Festival] and said I had this idea for this project and I'd like to do it. And he said he would help me make it happen by giving us a stage here to try it out. So I started writing and practicing. So tonight was like a homecoming – on the same stage. It was a very magical moment for me.

And the first person you reached out to was Sekouba Bambino?

Kouyaté: Yes. Sekouba is very important because he's between the generation of Bembeya Jazz and my generation. He's the link, the ambassador, between now and the old. And beyond that, he's a very, very great person. And for me, he's the best singer. He's very cool. So I called and he told me, “Ah, my brother. That is a very good idea. I'm going to be with you to do this project.” So then he came to my home in Paris and we began working and made the four songs for the EP. And we are continuing on.

When you say “continuing on,” do you see this project as an ongoing evolving entity?

Kouyaté: We have some more live dates this summer both in Europe and Africa, and possibly in Guinea. Then I hope to make a new CD, a full album, with this band. But I also want to continue this as a chance to bring in more musicians and singers to be a part of this experience, to keep expanding the flavors of the project.

You've brought in some old friends on this project like Petit Kandia, as well as the rapper Phaduba, but tell me about some of the younger members performing with the group tonight.

Kouyaté: There's the singer Djene Kouyaté. She's young and has a great voice. She also keeps to the tradition and mixes it with the modern style into something good. The youngest one on stage today was Sefoudi Kouyaté on the kora. He's just 22 years old. Then there's Abdoulaye Kouyaté on the guitar and Amadou Bangoura, only 25 years old, on the balafon. All great musicians too.

Let's talk about some of the songs on the albums. I love the song and video for “Sêwa.” After I first heard it, I just wanted to play it over and over. Such a great groove.

Kouyaté: Merci. Sêwa means happiness, but not just being happy for no reason. It's happiness that comes from sharing something good between people within a certain space. For example, in Guinea there are many different ethnic groups and have different cultures, but there is something we all share as being part of something bigger. I'm not just talking about people in Guinea though. I am from Guinea, but I live in Paris. I want to give something positive to those I live amongst... for us all to be in happiness and joy.

The song “Clandestine” is about the immigration crisis. What is the message there you are trying to say?

Kouyaté: Many Africans want to leave to make a better life, but people are dying on the sea. So many people. In the song we try to give a message to the young people that we know it's hard, but try to do something where you are. Don't go to die in the sea. I know you want to change your life, but try to do it this way. Here. We really need to work together and try to make things better at home. You can be a farmer, find a trade, or even a musician. It is important to say because we are also griots, and this is what we do.

One of the functions of a griot in our history was about bringing the peace between the people, to keep the culture and history alive to the each new generation. Also, to be an advisor. Like my forefathers, it is my job to say if something is good, but also if something is bad, to say it as well. Maybe not always to the chief. [Laughs]…. though they have to listen too.

And so are the All-Stars the only thing on your plate for now or are you working on some of your own projects as well?

Kouyaté: I'm trying to make my own album now. My last album was in 2017, so I'm trying to make that and am in the studio. But I'm also spending my time back in Guinea. I like to work the land. I grow some avocados, mangoes... many things. I'm out there digging.

For me, in Guinea, we were six million people and now we are 14 million. And I think tomorrow we will be 20 or 30 million people. So we need to have food. We need to be self-sufficient. We need more farmers to work with the land. So I try to show my people that we can help ourselves with our own land. That is also part of that message in “Clandestine.” Many people have lost hope, but if they see me working the land maybe they will find some. Maybe you grow something for yourself, but maybe you can grow enough to share with others. And the land is also part of our history. I don't come from a family of farmers; I come from a family of musicians. So this is a passion for me.

Thank you so much for taking the time to talk. I hope to see you again soon.

Kouyaté: And maybe next year, I'll bring you an avocado.