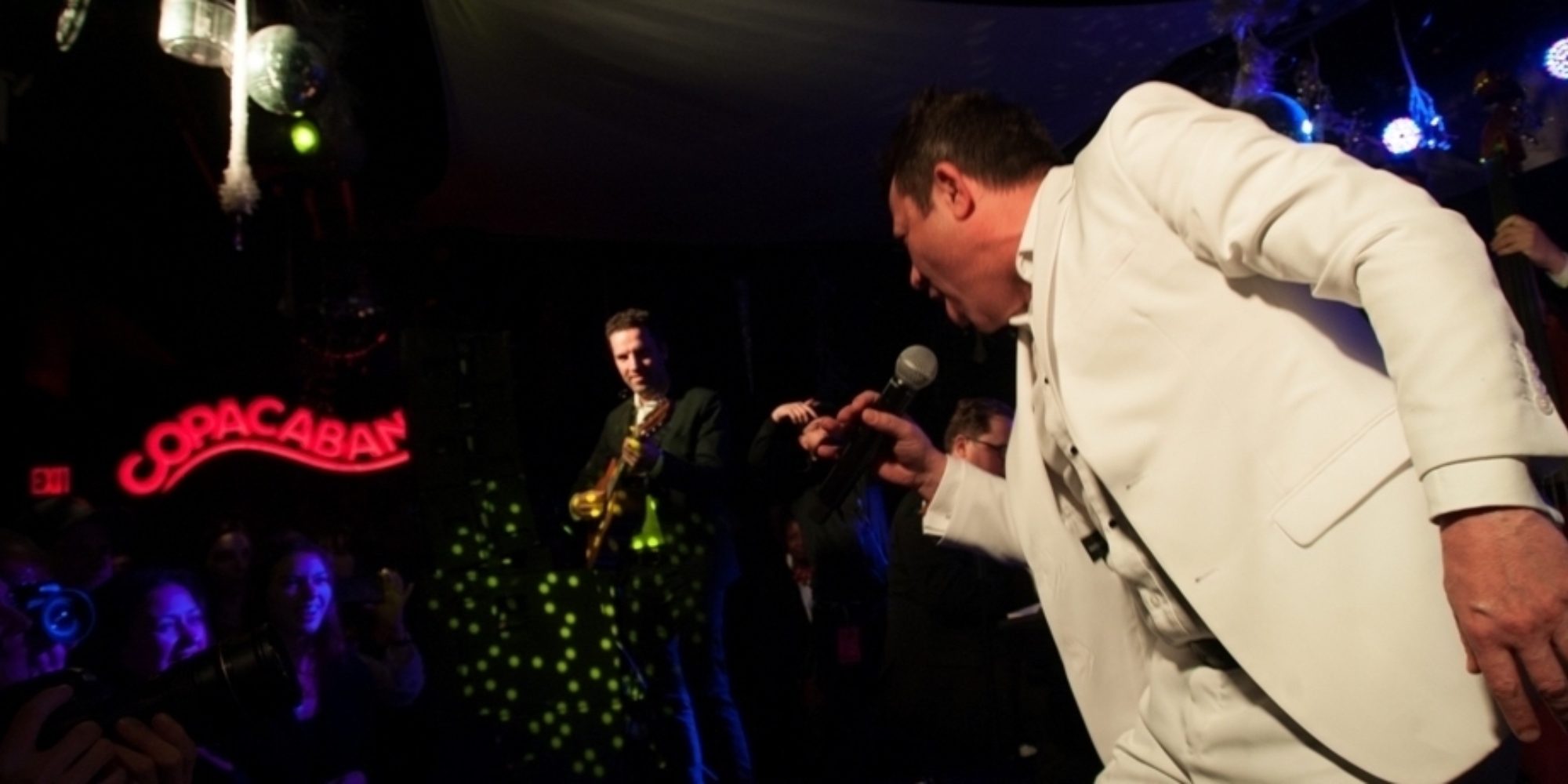 The mambo revivalists Orquesta Akokán get their big, lush, brassy sound the old-fashioned way: a whole orchestra of guys, a fact that was driven home when I interviewed them in a tiny Manhattan hotel room.

Nominated for the Best Tropical Album Award at the 2019 Grammys, Orquesta Akokán is a literal Cuban big band, made up of attentive students of the '40s and '50s masters like Tito Puente and Benny Moré, but not content to simply play the classics. Mike Eckroth composes the band's original repertoire, arranging for a full ensemble of brass and saxophones, congas, timbales, piano and tres, over which Jose “Pepito” Gomez's voice bounds. As you can hear on Afropop's globalFEST show, the band was decked out in evening wear as they spanned the stage of the Copacabana. Some bands are good, some great, but Orquesta Akokán is grand.

Midtown Manhattan hotel rooms, on the other hand, can be nice but “grandeur” is hard to achieve when you can't open the door all the way without hitting the bed. The tirelessly helpful festival publicists booked a hotel room for Afropop to interview Orquesta Akokán and it was only when the interviewer, band and hotel room finally came together that we all realized the situation was ridiculous. By the time the band all filed into the room, we were standing shoulder to shoulder around the bed, like we were at a wake being held in a steamship's cabin.

Compared to the difficulty of bringing a whole Cuban mambo orchestra into the United States, though, tight quarters were nothing to worry about. The band graciously talked about why they chose mambo, the African roots underlying Cuban music, and how they plan to follow up their Grammy-nominated debut.

Interview has been edited for clarity. Band members translated for each other.

Ben Richmond: You guys want to introduce yourselves—who you are and what you do?

Mike Eckroth, pianist, composer: OK, I'll start, this group is Orquesta Akokan. We are—I don't know how to describe the band—it's modern, but..this is mambo music. So it's kind of new compositions based on an older style.

Jacob Plasse, tres, producer: Why mambo? This project sort of started when Mike and Pepito got together. We'd all play in different bands around the city together— we three all live in the New York area—and Mike was sort of a Beny Moré aficionado, and he got me really into it, and we started writing these tunes with Pepito, the lead singer.

Pepito is from Cuba, even though he lives in New Jersey now, and he had a concert in Cuba and said “Why don't you guys come down and hang out?” And slowly it turned into a recording session, which none of us anticipated in the beginning.

We loved the older sounds of Cuban music especially. Everyone in this band is good at the modern timba sound, which is sort of like salsa on steroids, but it was really important for us to play this music. We really loved it and there weren't the opportunities in the city or even in Cuba to explore this style of mambo music.

Is mambo music still pretty popular on the island?

And you're writing original songs to do that?

Jose “Pepito” Gomez: We've done a lot of studying about how they used to write and the way they'd sing and we're combining it with the more modern way of playing Cuban music as well.

What changes do you make that one wouldn't hear on a '50s mambo record?

Jose “Pepito” Gomez: There are a lot of differences. One of the things to take into account, is that Mike, the arranger, has been very respectful of how they used to orchestrate at that time—the voicings in the brass section and all that is very well respected—and if we're going to talk about certain difference, it would be that we're modern musicians living in modern time. We bring certain differences into that style in the way the instruments sound and the way we play. So it's an interesting combination between how we think contemporarily and how the music has been conceived in the original way of making it.

How do you balance out something that's old with something new?

Jacob: All the compositions are new, but it's like we're taking the fabric of the rhythms and drawing inspiration from it. Maybe a correct analogy would be how early rock 'n' rollers took the blues forms and figured out their own interpretation based on their own lives. We're not trying to recreate a moment in history, but we're trying to draw inspiration from an era of music that was really rich, especially harmonically, melodically and rhythmically and use those ideas now to create new music.

There are some modern-sounding touches: At the beginning of “Un Tabaco Para Elegua” there's kind of a voice-over at the beginning—a narrator in there.

Jacob: On that song “Un Tabaco Para Elegua”--”a cigar for Elegua”—Pepito is saying a Santeria prayer over the song, for Elegua, the god of the doors to open the doors.

Are there a lot of orisha worship elements in mambo?

Mike: I just think that's kind of a structurally important element to Cuban culture. So if we're talking about the '50s, and Afro-Cuban music in the '50s, all the riffs and the Cuban rhythms we know today, they originate in that period and of course that's a perennial element of that culture. Not that all of our songs are about that—that's the only one that touches directly on that on the record—but if you explore any album by any Cuban band in history, there's going to be something of that in there, some element in there.

And not even lyrically, but structurally?

Mike: It can come from so many places. But I think our inspiration is more from the overall style. Because I'm the one who did the arrangement, so my inspiration was listening back to that music and that informs the music we're writing. When Pepito was writing lyrics that fit the time period—because obviously people 60 years ago write about and talk about slightly different stuff—he was respectful to the thematic parts of the music too.

David: One very important thing to say is, is that every style of Cuban music has in its blood a lot of elements of Afro Cuban culture. You can't think of Cuban culture without the African parts of it. Anything you do in Cuban music has that. The slaves were brought to Cuba and there has been mixing of European, African and now with a century of jazz influence—especially in the '40s, '50s and '60s—there has been a real transculturation and blend and way of blending cultures. Anything you hear from Cuba, you will for sure have a big element from Africa. 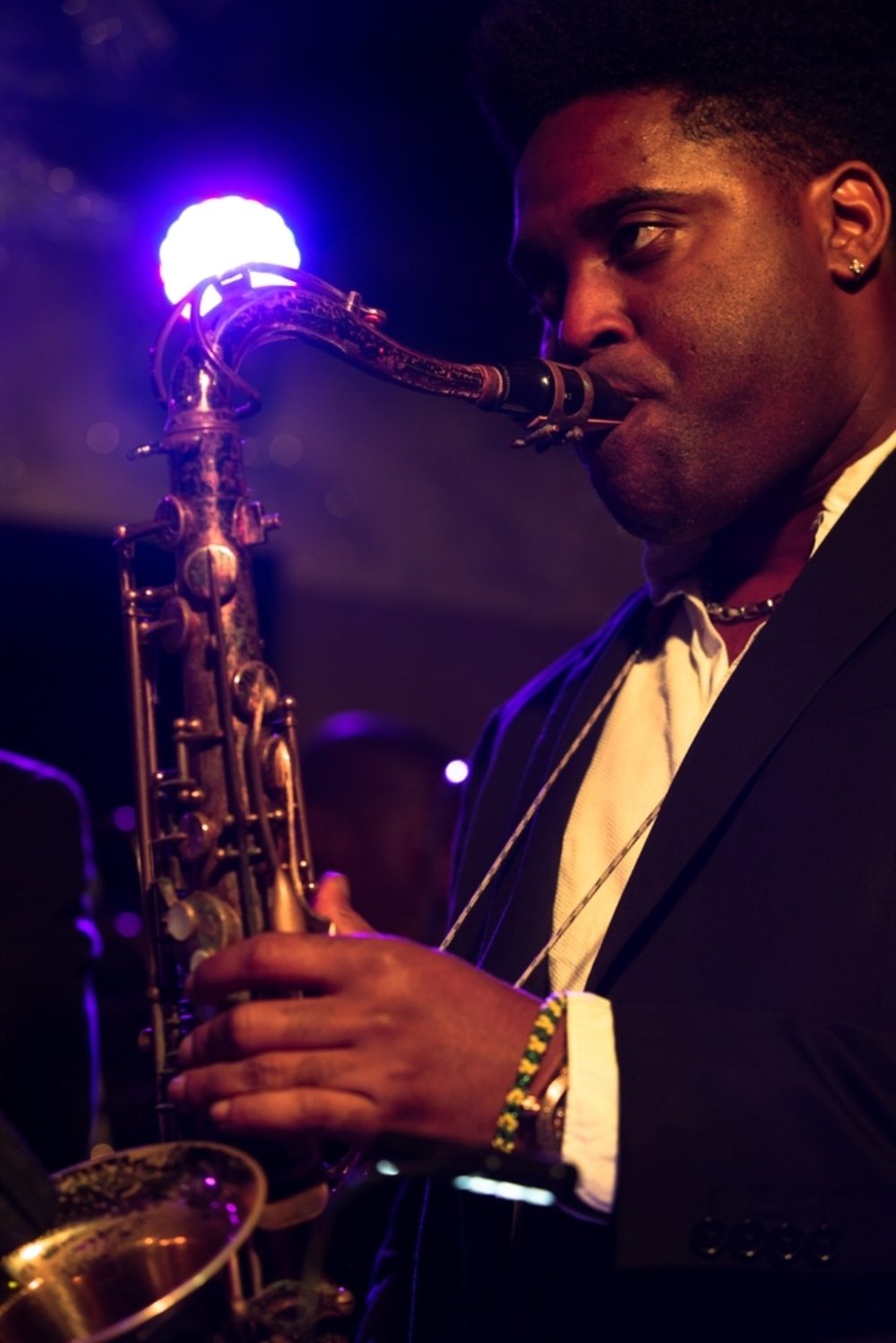 All photos by Sarah Escarraz, used with permission

Is there something specific, an instrument you can point to?

David: Congas are an evolution from African instruments. There's the bata, percussion, which is actually Yoruba percussion. These are different styles that come directly out of the religion.

Jacob: Throughout our band, santeria is pretty prevalent. You'll see a lot of our band members have elekes, which signifies they're members of the religion. Even in the band the religion is present.

So even though it's popular music, there's a sacred element to mambo?

Mike: Yeah, but not any more than any other Cuban music has. I think that's the point that David was making: it's just a fundamental cultural element in the music. Mambo is generally happy songs or love, and common lyrical themes are the same. When you point to that one song, it has that element, but the other stuff is more in tune with all kinds of music from that period.

You played and recorded in Cuba?

Jacob: We recorded in Cuba and we're going back. We just did a European tour and the Kennedy Center, over the summer we did Lincoln Center and played the Pier in Santa Monica, California. So, we're around.

Do dance parties break out wherever you play?

Ha, yeah. Last night at first everyone was a little slow on it, but everyone gets to dancing and it turns into a party. 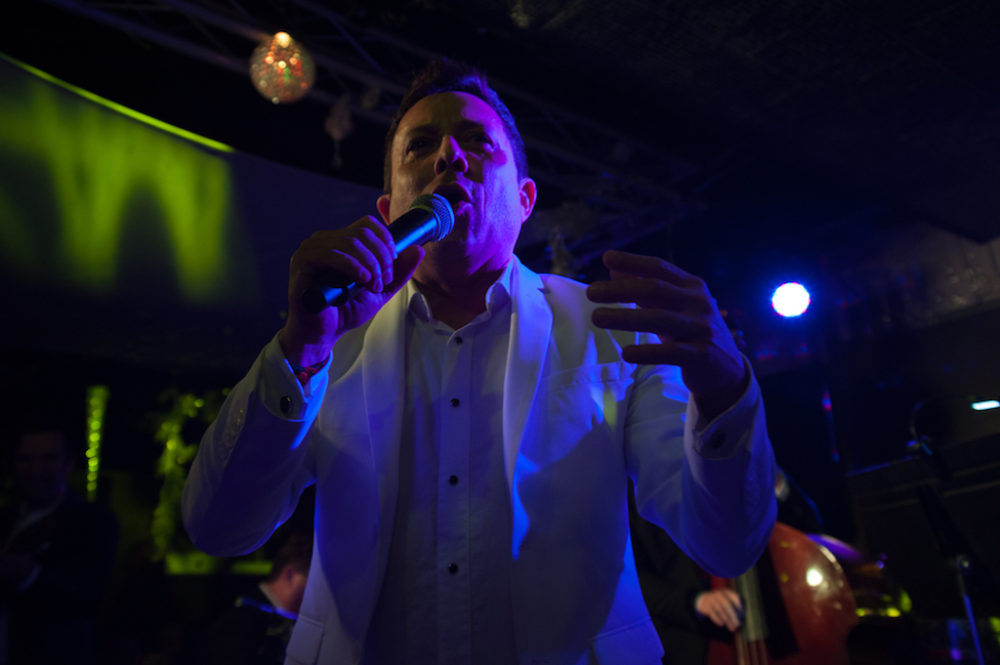 Outside of Cuba and the U.S., it seems like Cuban music pops up everywhere. You go to Colombia, for example, and everyone will know the steps the minute a Cuban-style band starts.

Pepito: Cali has helped a lot to maintain the heritage of salsa and the Cuban son, from all the festivals that take place there. I had the opportunity to participate in the Colombian fare, and there's a lot of stages playing music from Cuba.

David: In Mali, there is an orquesta called Las Maravillas de Mali, like a take on Cuban groups. There's so much exchange. There is a very important bass player, Richard Bona, who is an African bass player, and has done so much Cuban music, respecting the way its played.

You have a tour coming up?

Jacob: 2019 looks pretty busy. We're booking some European festivals and looking into stuff in the States. Getting to the States is not easy right now for a Cuban band—not sure how much I should discuss this—but it takes a lot of work to get the band here. But people respond so strongly that we want to make sure we can play here. The Cuba thing right now is really difficult.

Jacob: No, Europe's really easy. We have no problem.

Oh, man, sorry about that. And the album is freshly out

Jacob: Yeah, it came out in March and is up for a Grammy in the Latin category.

Congrats. And you have plans for a follow up?

Mike: Yeah, this year. We're working on the music right now actually. So we have a trip to Australia next week, but as the guy who does the arrangements, I'm at home working on stuff on the computer.

Jacob: The idea for this album is that older bands used to play stuff live a lot before recording, so we want to play it, listen back, add things, shorten sections, just make it feel organic in a different way.