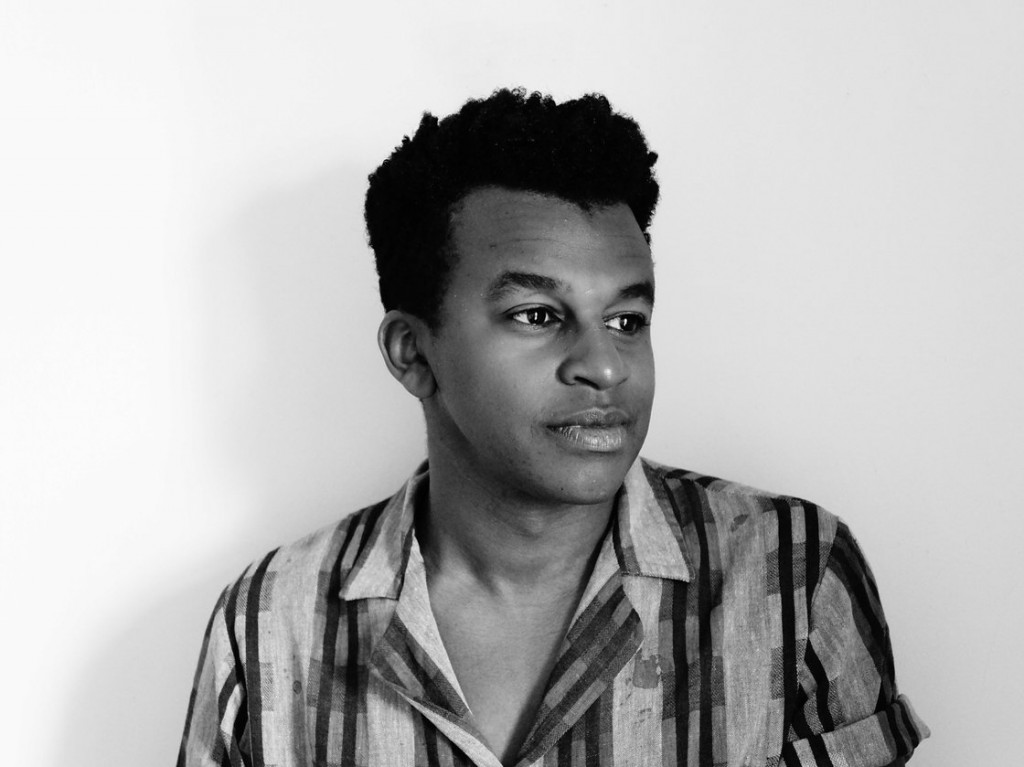 The London-born, Brooklyn-based Sudanese Ahmed Gallab has been very busy in the past few years. His band, Sinkane, played New York's Central Park SummerStage with Afrobeat maestro Femi Kuti back in the summer of 2013, and became the  director of William Onyeabor's Atomic Bomb! Band, who played BAM in May 2014.

Sinkane will tour the U.S. in November 2015, with a stop in New York at Le Poisson Rouge on Nov. 11. In anticipation of his upcoming tour, we delved into our archives to unearth this unpublished 2014 interview with Ahmed conducted by Sam Backer. They discussed his then-newly released album Mean Love, his band, and the mad Nigerian genius William Onyeabor, among other things.

How long have you been working on it?

So the band hadn’t been playing live prior to Mars?

So is it the same lineup?

There’s a different guitar player this time around, his name is Johnny Lam. The full group is Jason Trammell on the drums, Ish Montgomery on bass, and Johnny Lam playing guitar and pedal steel.

In some regard I wanted the vibe on this album to be a little more energetic. But I was much more attentive to the message being portrayed. I really wanted to talk and sing more about the personal situations that were going on in my life, but also to trying and relate these personal things to universal things. You know, so people could understand that I’m talking about myself, but that they could also relate to whatever I was talking about of their own accord. And that can kind of give them their own personal relationship with the record. I always like records that have that kind of energy.

I think that comes through really well. I’ve listened to the album a bunch of times in prep for this interview, and it’s interesting because it does a really good job of allowing you to relate at your own pace. You listen to a song a few times and then certain lyrics will just pop out at you.

Yeah. That’s like pretty much the aim of the whole album. You hit the nail on the head right there.

What kind of things were you trying to explore? I know you mentioned the message of the record...

Well, a lot of it has to do with relationships, really. You know, like my relationships with my family, my relationships with my friends, my relationship with myself. I wanted to use this album as a kind of therapy, to address issues and actually face them. And hopefully you know that would kind of allow me to feel better about things. I think that’s what ended up happening. I didn’t really understand or realize what was going on until the end. That was kind of the true kind of thing, that this was a very therapeutic and cathartic record. But, it ended up being that way, it’s a really interesting thing. When me and my co-producer, Greg Lofaro, were working on the album we knew we wanted to talk about things deliberately but I didn’t really get an understanding of exactly what I was feeling until it was all done.

Musically I think it’s a very interesting album as well. It's something that I thought was really cool about Mars, but that was really brought out on this one. It’s a kind of melding of a whole bunch of different pop musics, really effectively. I think you do a terrific job of that. A couple times you get this kinda great 6/8 groove, with a kinda Motowny thing on top. I don’t know if that’s how you’d describe it, but...

That’s all a product of my upbringing. I moved around a lot, when I moved around, I became pretty attentive to a lot of the different cultures and different people around the United States, and back in Sudan, and all over the world, you know? It’s really interesting when you move to a different place and see how different people react or absorb or enjoy something like music or current events or whatever! And it gives you an interesting perspective and you learn a lot from that kind of thing. And one of the things I love with moving was learning about music from young people all over the world. You know as a kid, that’s the reason why I got into hardcore, into indie rock music or psychedelic music, you know whatever it is that my friends that I meant put me onto. And I’m kinda like a sponge, if you ask my friends they’ll really tell you I like everything, I like all kinds of music, and in my project really wanted to showcase that appreciation for different kinds of music and try to see the relationship between one kind of music and another and try to put them together to create something unique.

Yeah, I think you’ve created something unique. Are there any kinds of artists or sounds who were really touchstones?

Yeah, I mean I was listening to African music, like reggae, country & western, soul, and I found this relationship between all these kinds of music that I thought was really interesting. The people who made country & western and classic American folk music and the people who made reggae music, soul music, African music all kind of came from the same place and had this similar energy and immediacy and urgency in that they all suffered from oppression and they understood longing and nostalgia and that kind of idea of music the same way. And I wanted to kind of see what would happen if we brought all these different influences together that shared a similar thing and see what would happen.

I love the country sound in there. I was listening to the album and some of the pedal steel and I’m like “yeah, pedal steel!”

[Laughs] That’s awesome. Yeah, it’s my favorite sound I think. It sounds so cosmic, like it’s from outer space or something, you know.

Were there any specific artists you were listening to when you recording this album?

Early on I listened to a lot of Eddie Kendricks, and Curtis Mayfield obviously, Parliament Funkadelic, that stuff. I did the William Onyeabor thing and he had a big influence on this record and really all of my music. Flying Burrito Brothers were a pretty big one, the Birds, I guess you’ve heard of their country record.... A lot of that kind of stuff, a lot of roots reggae, the Jamaican band The In Crowd influenced the band, you know Sudanese music, Ethiopian music, a lot of African psychedelic music from the ‘70s.

Yeah, it’s really dramatic and romantic. Sudanese music is really weird but it’s also really interesting because the music in Sudan is made the same way I make music: It draws from all different kinds of music and makes something that is uniquely its own. So a lot of influence from the Middle East, from East Africa, Somalia and Ethiopia, Indian music and reggae music. And our classical West African music. So when you listen to what you can hear these little pieces and parts of the music, ultimately I think it turns into this really dramatic thing, and the instruments kind of sing as if they were a lead vocalist, and they sing with a lot of energy and a lot of emotion.

Also I think it’s cool because there’s a lot of American soul influence in that music, and you’ve been bringing it back into that context a little bit.

I think a lot of that came from me wanting to sing because a lot of the music I listen to doesn’t have vocals and if it does it’s a very plain-Jane kind of thing. But soul singers and r&b singers kind of have to really sell what they’re saying and that ends up being the song. And that’s where Eddie Kendricks and Parliament Funkadelic influence came from. There’s a specific Parliament Funkadelic record that’s called America Eats Its Young where I feel like George Clinton sings on that record and it’s so interesting, different and crazy, really compared to any rock music or r&b or soul music ever. He blends all these different kinds of influences and there’s even pedal steel on that record too. The way that he sings about and projects what he’s feeling is really, really amazing.

In 2013 I played with Femi Kuti and Sinkane at SummerStage, Eric Welles-Nystrom and Yale Evelev from Luaka Bop were there because they were filming the William Onyeabor documentary and they wanted to interview Femi. So they were all backstage and they finished interviewing Femi and they came out and they asked me if I knew William Onyeabor. Obviously I knew who he was, I mean he was such a huge influence on my music and I was so surprised that someone was doing a documentary on him when there was hardly anything on the Internet about him at all. So I was like, that’s fascinating, we kind of talked about it for a while and he asked me if I wanted to have lunch someday and talk about the project and when I did they asked me if I wanted to be involved with a live show and so I instantly said yes and went to the band, frantically saying this is gonna be great and this is fantastic. This is probably one of the greatest achievements I‘ve ever accomplished.

Was any of that recorded, is there a record available?

Who is? William Onyeabor?

Yeah, I mean I don’t know much about it but I think he’s working on new stuff.

Cool. I mean, I couldn’t really get a sense of how he was part of the William Onyeabor Luaka Bop stuff.

Yeah, he wasn’t really involved in anything. I mean he doesn't really wanna talk about music at all. But he’s a pretty devout born-again Christian and all he wants to do is talk about Jesus. And the new music he’s working on is gonna be Christian music you know. It’s really interesting because in talking to the Luaka Bop guys about it I get the sense that music wasn’t a thing he did because he wanted to play music. It was a thing he wanted to do because it’s been a great business adventure for him. He talks about how he accomplished things on a business level not that he created this really amazing, profound, ahead-of-its time music. You know I feel like the talent side is something that he just allows to be and seek for itself, you know. But the challenge for him was to create this business venture. I think that’s all he really cares about.

How did you get into his music?

From a Luaka Bop compilation actually World Psychedelic Classics, Vol. Three, that was a real thing, "Better Change Your Mind" was on there and it stuck out like a shining beacon compared to the rest of the songs on the album. Every song on that record is great but that particular one was amazing. And it reminded me a lot of myself and how I wanted make music, and to blend African and American influences together, but also transcend them and make something truly unique. So that was the first time I heard about him and ever since then I’ve tried to scour the Internet to find anything else.

Well, I think that’s about it. Thank you so much for taking the time to talk. I really appreciate it.