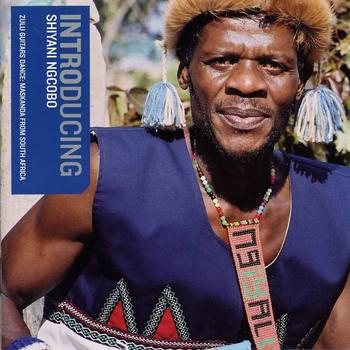 In more ways than one, this is a fitting debut on World Music Network's new [in 2004] imprint. Not only does label head Phil Stanton have an apparent appeal toward mathematical symmetry (2004: Riverboat Records' 15th year, WMN's 10th, Introducing's 1st), but he's picked the perfect counterpart in Shiyani Ngcobo. As a Zulu youth he was introduced to the guitar via the homemade igogogo,¬ a version handmade by impoverished kids from a five-liter oilcan, wood, nails and wire,¬ and had his brother teach him the song "Sevelina." The Rough Guides catalog is an industry built around old, discarded tracks of varying qualities spliced into regional mixes. Stanton and Ngcobo both know their history and explore it fully, but remain unconfined by it.

Introducing, being a new series of studio-produced albums (round one also sees incredible efforts by the Malagasy All-Stars, a tradition-oriented ensemble from Madagascar, and Sukke, a European Klezmer band recreating Judaic roots music), breaks from Stanton's claim to fame with original, non-rough material. Shiyani Ngcobo covers a range of rhythms in his homegrown maskanda style--that's traditional Zulu guitar music. The few available international releases of this music invariably root the sound in a slamming, steady bass-drum beat. But the heart of the sound is distinctive acoustic guitar finger-picking and rich vocal harmony. These shine here as nowhere else. This is a dance music rooted in guitar sound, often using it as both melody and beat. From the sound of this recording, Ngcobo is obviously a master, creating rich textures with minimal instrumentation; the only percussive sounds are handclaps, shakers and the tapping of feet. There are, however, many bird cries, some from outside the studio, others Ngcobo's.

Ngcobo's fret work calls to mind another acoustic mastermind, Habib Koite. In fact, Zulu finger picking in general definitely has distant cousins in Mail. There is an enticing quality to these songs, drawing in and engaging the listener fully, his guitar and voice acting like two sides of the same song; after 30 years experience, the two have merged gorgeously. Slower efforts, such as "Izinyembezi," about the killing of youths in war for greed, and "Wayi Thathaphi," a song about how he learned such a difficult style of music, flow beautifully; the boasts of this maestro are well earned. But there is another dance, one Ngcobo sets afire when picking rapidly: "Senzeni," a fiddle-led track as raucous as any local hoedown; "uDadewetha," a warning of feminine promiscuity worked into a gospel-esque chorus; and the opener, "Yekanini," in which violin and guitar interweave perfectly. With vocals as sweet as Koite's and guitar playing as penetrating as King Sunny Ade at his best, Ngcobo's introduction is worth seeking out. Purchase price is worthwhile, in fact, just to read producer Ben Mandelson's apt liner notes, a brilliant tribute to the making of this inspiring record.

Note: Shiyani Ngcobo died on February 18, 2011.  He never completed a followup to this great recording.  Here is a link to Shiyani's World Music Network obituary.