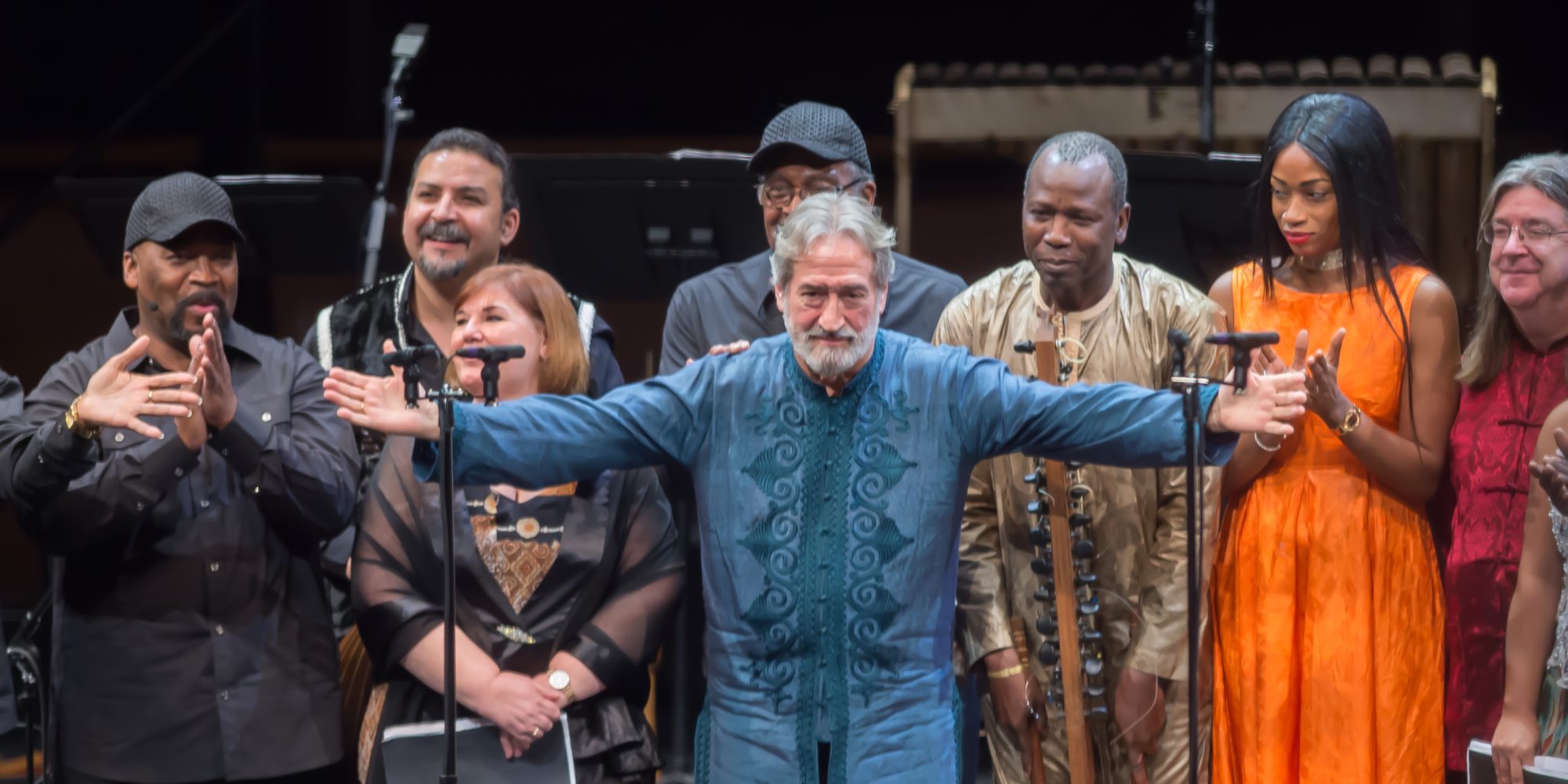 On Nov. 15 at the Rose Theater, Lincoln Center’s White Light Festival presented the only American performance of Jordi Savall’s ambitious touring project, “The Routes of Slavery.” Some 32 musicians from three continents and an African-American narrator, John Douglas Thompson, collaborated in a richly engaging evocation of transatlantic slavery and its musical artifacts between 1444 and 1888, though, as Savall notes, the global practice of human slavery goes back at least 5,000 years, and continues in various parts of the world today. 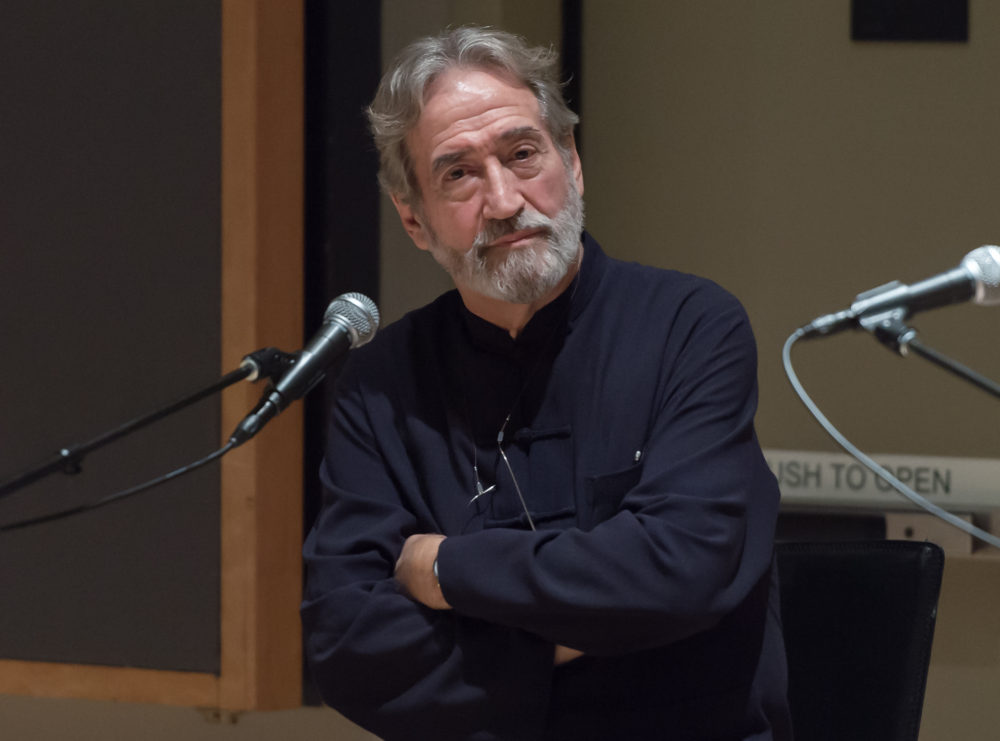 Spanish viol master and conductor Savall has spent the better part of five decades imagining and reimagining the past through music. With over 230 albums to his credit, he is one of the most creative and imaginative musical visionaries on the global scene today. And this performance provided ample evidence of his audacious reach. Stretching over two hours, with an intermission, the show followed a consistent structure: a short segment of narration with spare musical accompaniment, followed by one or two ensemble pieces. Text captions high above the stage provided translations of lyrics, whether in Bambara, Spanish, Catalonian or Portuguese.

Five overlapping ensembles joined forces here, beginning with two that Savall has led for some years: Hespèrion XXI, specializing in Mediterranean music from the 10th to 18th centuries, and La Capella Reiel de Catalunya, specializing in Hispanic and Latin vocal music, notably from Catalonia. The Fairfield Four, of Brother Where Art Thou fame, brought a soulful element of African-American gospel a cappella into the mix. Then, while not a formal ensemble, a set of Malian musicians based around the kora virtuosity of Ballaké Sissoko and the vocal prowess of Kasse Mady Diabaté, one of West Africa’s most celebrated griot singers, allowed the ensemble to delve convincingly into the griot repertoire, notably in a rousing rendition of “Touramakan,” a finale that included the entire musical cast. 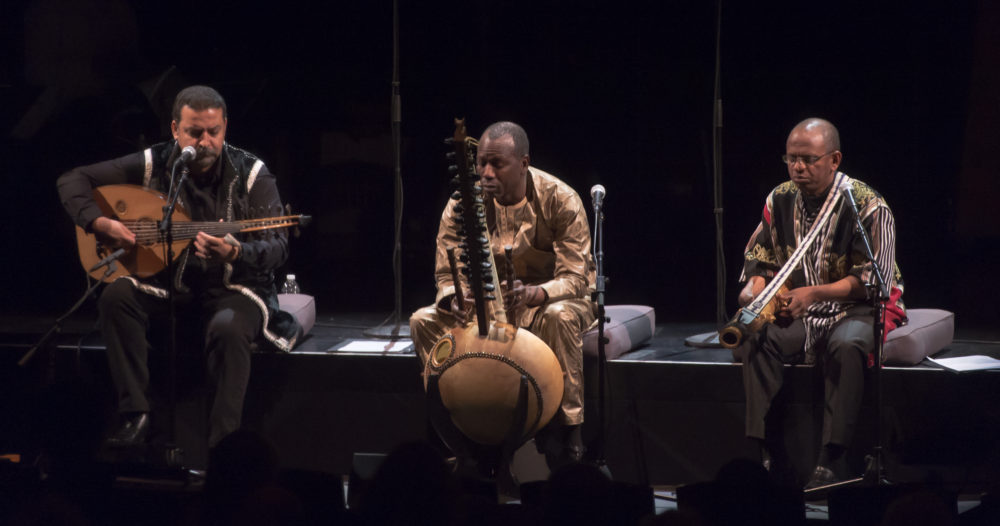 The fifth ensemble, seated at the front edge of the stage, performed on their own as a trio under the name 3MA—a coming together of Mali, Madagascar and Morocco (Maroc in French). Ballaké Sissoko on kora, Rajery on valiha, and Driss El Maloumi on oud together created entrancing webs of plucked-string virtuosity. Beyond these groupings, a superb set of vocal soloists were showcased: Maria Juliana Linhares of Brazil, Adriana Fernández of Argentina, Kasse Mady from Mali, and, from Venezuela, bassist Iván Garcia, who accompanied his powerful vocals with loose, fluid dance moves. 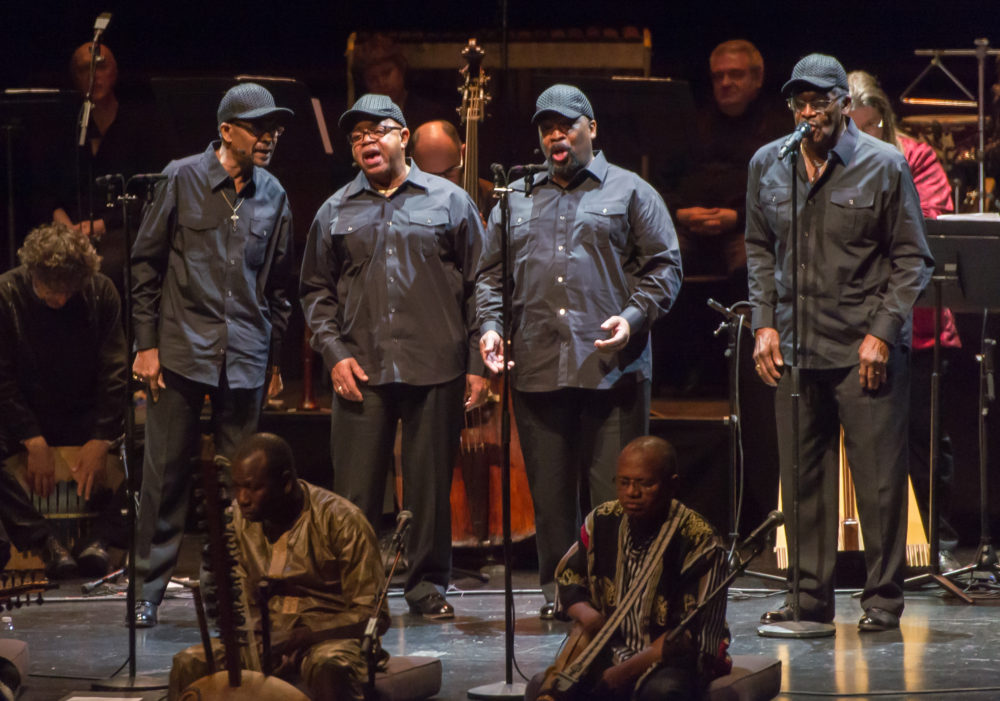 Beyond the griot songs and American spirituals, we heard a fascinating variety of early music with “Negro” elements, as well as art music and folklore from Brazil, Colombia and Peru. There was a great deal of collaboration with artists from all these backgrounds joining in wherever possible. Artists not performing on a given piece sat in an arc around the ensemble, swaying and clapping in time or simply observing. The narration interludes allowed for all these transitions to happen naturally. Spoken words were accompanied by solo performances on guitar, oud, valiha, kora or percussion, so that the flow of the performance was never interrupted. 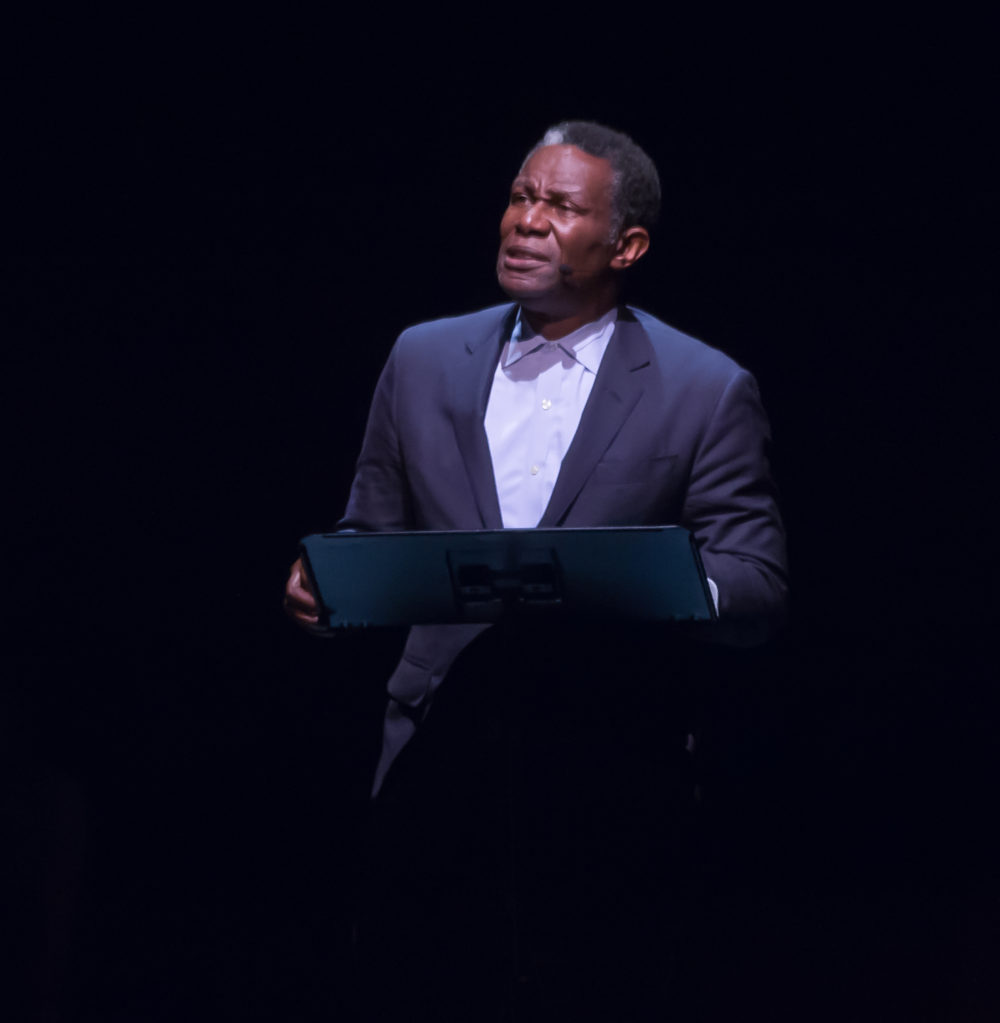 The narration drew on texts ranging from centuries-old chronicles of slavery (including horrifying descriptions of the punishment of slaves), to a sadly racist quote from Thomas Jefferson, and a proposal for reparations from Martin Luther King. An excerpt from an 1855 personal letter written by Abraham Lincoln drew a delighted response from the crowd with its suggestion that if defenders of slavery truly wished to experience an oppressive society, they should consider moving to a place where oppression is practiced undiluted, like Russia! 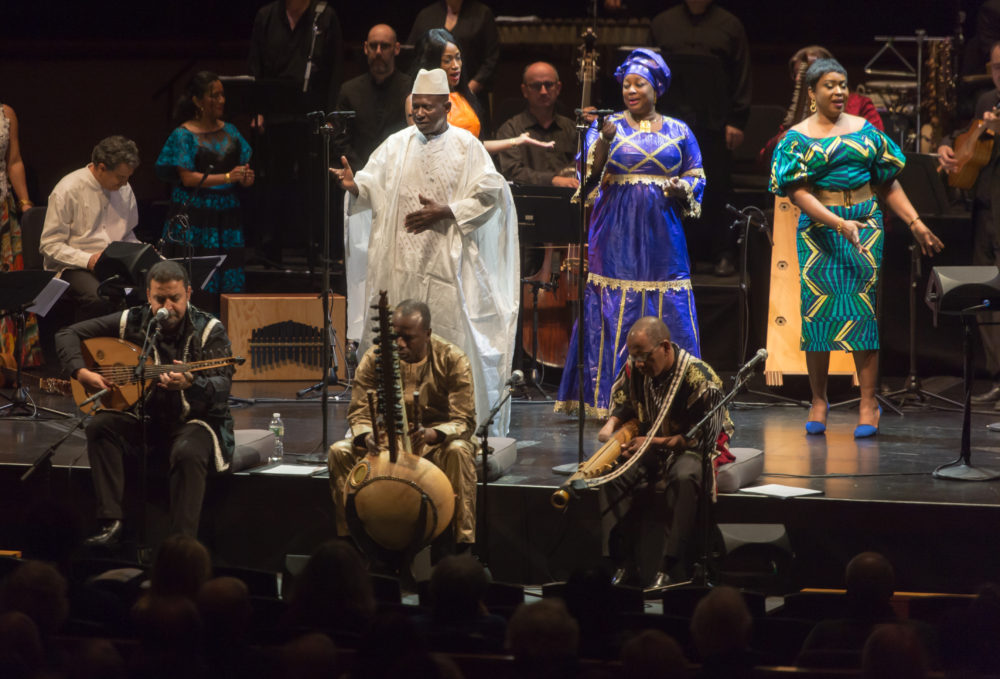 Making all these elements flow together cannot be easy, and the energy and effectiveness of the performance surely varies from night to night. In this case, the first half took some time to coalesce. When Kasse Mady led a performance of the griot praise song to hunters, “Simbo” (also know as “Kulanjan”), the energy didn’t quite soar. Perhaps I have an unfair advantage, having seen Kasse Mady sing this song in various contexts. Here, his vocal wasn’t quite loud enough, and the piece didn’t last quite long enough for him to deliver his trademark ecstatic crescendos. Nevertheless, the piece was stately and beautiful, and Kasse Mady cut a commanding presence in his white grand boubou, as he constantly rearranged it and thrust his arms forward in the characteristic gestures of a griot. Similarly, knowing what is possible, brief interludes from the kora, oud and valiha left me longing for more. 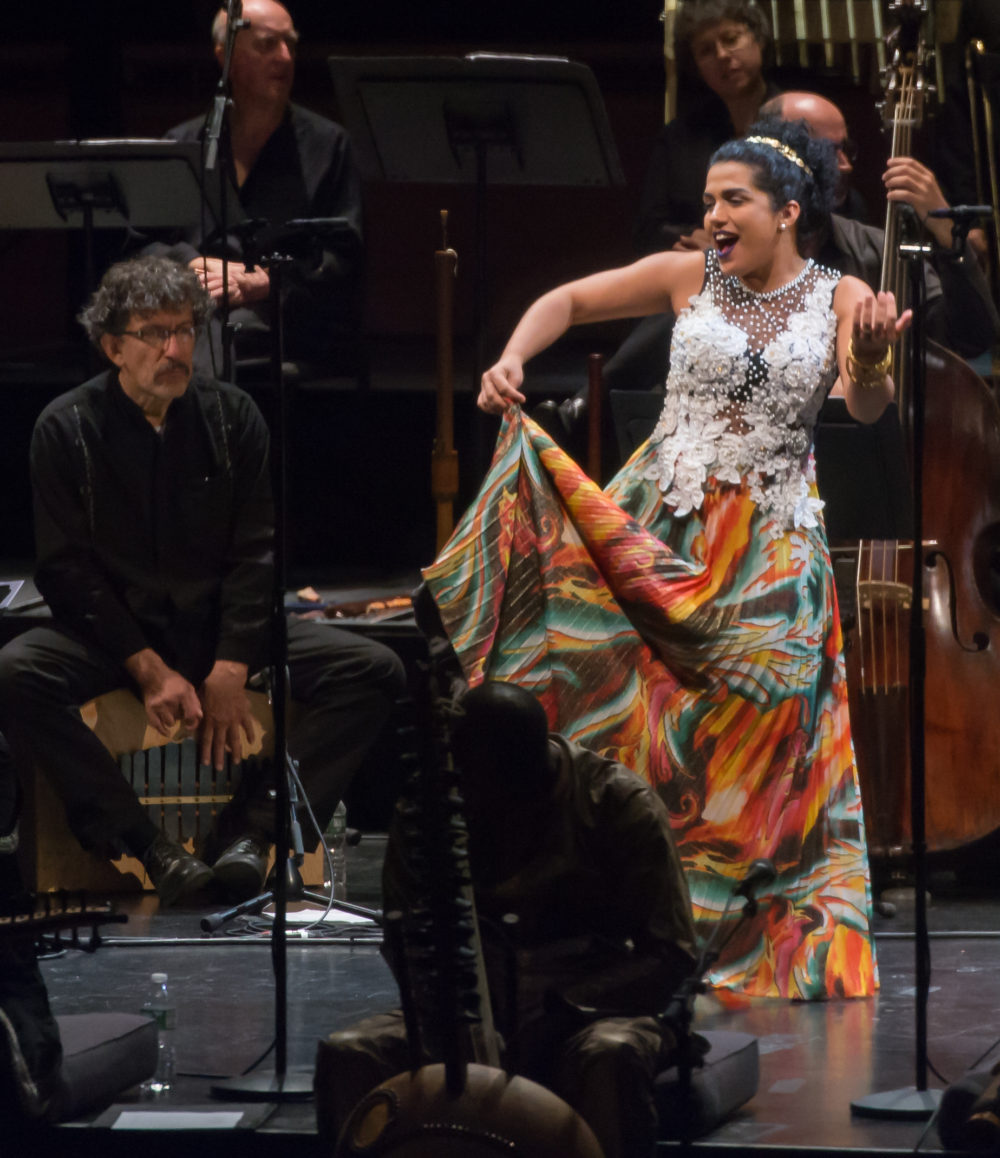 But any shortcomings were richly redeemed in the second half of the show, which gained momentum steadily and fully delivered on the promise of this august gathering. A Pacific Colombian percussion and vocal piece set the tone with the mysterious, spine-tingling vocal harmonies we associate with the great Toto La Momposina. The three African string players brought the house down with an extended interactive piece. The Fairfield Four did the same with a robust, swinging rendition of “Hallelujah (Love Just Bubbles Over My Heart).” And by the time Martin Luther King’s words culminated in the full-ensemble rendition of “Touramakan,” the entire audience was on their feet in a joyful culmination of a dark voyage.

It is remarkable indeed that such difficult subject matter could be turned into such an inventive, moving, dare I say, uplifting evening of words and music. But that is Savall’s genius. As he said in conclusion, without senses there is no memory; without memory there is no spirit; without spirit there is no justice; and without justice there is no human civilization.