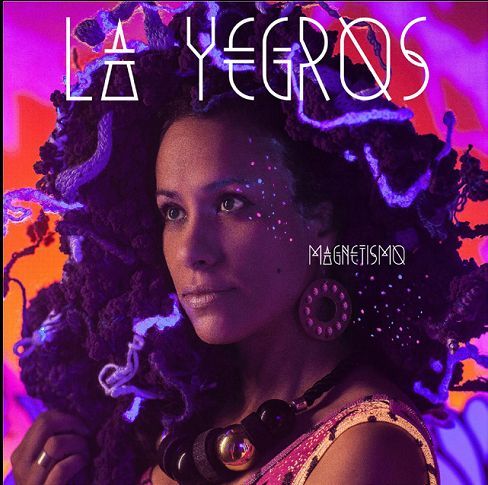 One of the great pop music formulas of all time is to take folk music and remake it with the current dance music aesthetics. That, in a nutshell, is the recipe for many of the marquee music genres in the Afropop universe. Today, one might argue that nobody is doing this with more vitality and freshness than musicians in South America. Bomba Estero leveraged this approach to Colombian coastal folklore and quickly found a global audience—just one of many recent examples. On her second album release, Mariana Yegros—La Yegros—draws on Argentine and Colombian folk and comes up with one of the most innovative and ear-catching sets of pop songs this reviewer has heard out of the Latin alternative world yet.

The opener, “Magnetismo,” pulls you in instantly. The pendulous lope of cumbia, grounded in rich percussion, makes a bed for a dreamily chiming electric guitar riff and the deep crunch of a what sounds like a super bass clavinet. Yegros’s sassy vocal commands center stage with sly, searing authority. Her voice has been described as “punk,” and it can certainly put up an in-your-face attitude. But it’s also playful and melodic, at times echoing the cutting nasal quality of Bomba Estereo frontwoman Liliana Saumet. And Yegros has range, drifting into sensuous, satiny softness on the rhythmic ballad “Hoy,” brimming with urgency and angst on the buzzy, bass-driven “Atoremendada.”

The folk element comes in various forms here, often via accordions as on “Dejate Llevar” with its lopsided triplet groove and staccato vocals, or the rootsy, acoustic closer “Lejos.” “Chicha Roja,” the album’s advance single, features Gustavo Santaolalla of Bajofondo on squeezebox, and it’s a hook-laden kicker that drops in the ambience of a highland festival with pan pipes in the midst of its dance floor romp. Other tracks are more subtle, like “Carnabailito” which opens with the ringing metallic slap of a hang drum, then eases into a cumbia lope rooted in a low guitar riff with Duane Eddy twang. “Arde,” featuring vocalist Sabina Sciubba of Brazilian Girls and Colombia’s Puerto Candelaria, reworks a deep cumbia groove with rich brass section work and jazzy chord changes.

Even on the most electronic tracks, like the minimalist “Fragil,” every sound is distinctive and every groove breathes. Yegros has the voice to make all this variety hang together beautifully. Hats off too to producer King Coya (Gaby Kerpel) for his role in creating a sonic feast, a pop album that really pops, never sagging into the rote or predictable.