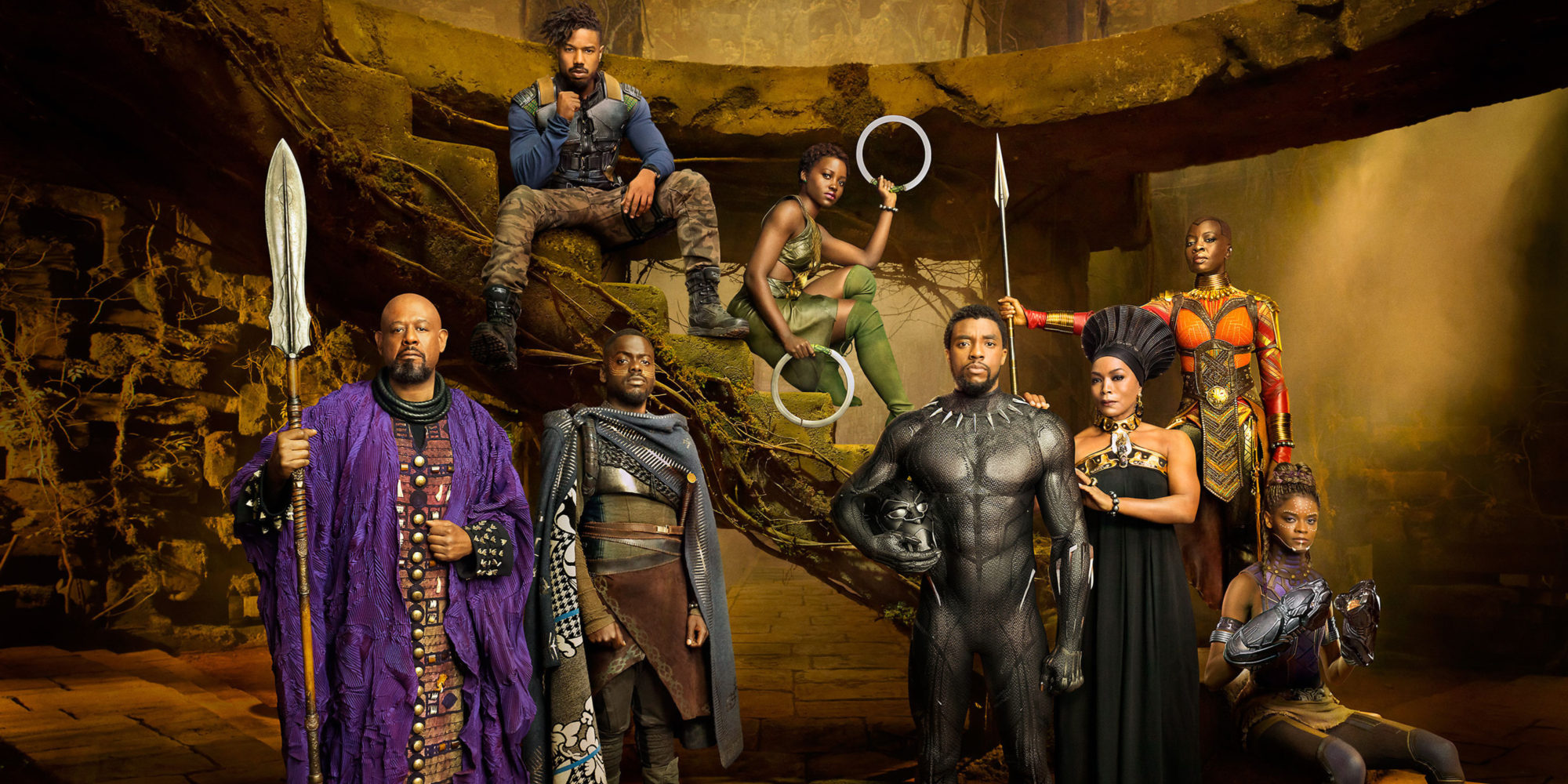 The success of the new blockbuster movie Black Panther lies in the details: It is a Marvel Studios film with an ever-evolving comic book history extending back to its inception in 1966. Director Ryan Coogler released the film in theaters around the world on Feb. 16, giving movie goers a first-class ticket to Wakanda, the setting of Black Panther. Wakanda is a fictional hidden African nation where King T’Challa reigns and must defend the throne from a villain, Erik Killmonger.

The film raises a multitude of questions about African identity, pan-Africanism, feminism, nationalism, colonization, the devastating effects of slavery, and so much more. These deep topics are placed against the backdrop of Wakanda’s stunning culture and a very capable cast to carry the narrative. It is the authenticity of Wakanda’s culture that allows these topics to make such an impact because without it, the discussion could have been focused on the bad Wakandan accents or drab clothing (as was in Concussion starring Will Smith). Instead, the language of Wakanda is Xhosa. Non-South African cast members actually learned a few lines in Xhosa, clicks and all. The costumes, by designer Ruth E. Carter, were chosen from specific cultures like the Basotho blankets worn by Wakanda’s Border tribe, T’Challa’s royal kente stole, or Queen Mother Ramonda’s zulu isicolo hat. Many aspects of Wakandan culture were drawn from actual African traditions, taking away the breaths of audiences and causing hearts of Africans from those cultures to swell with pride!

The music of Wakanda also benefits from this level of care and specificity. While the language of Wakanda is Xhosa, the music of Wakanda draws predominately from Senegalese instruments and sounds. Ludwig Göransson is the Swedish composer and curator of the music of Wakanda and tasked with writing the score for Black Panther. The gravity of this assignment was not lost on him and he expressed the level of the responsibility in an interview with syfy.com when he said, “Music is from Africa, and I could never have done this score without going there and spending time with the griots, listening to their stories, and their rhythms that they've been passing on from generation to generation.”

The music frames traditional ceremonies, battles and everyday city life. Music also helps to move the story along. Here are three of the important musical moments:

A fact that continually breaks my heart when considering many of the atrocities of the transatlantic slave trade is the fact that drumming was banned in many plantations in the Americas. It was considered taboo because slave owners feared that drumming would cause an uprising among slaves. African drums hold so much life force, identity and knowledge within them and the oppressors were aware of their communicative power. This is what brought about the culture of the ring shout, for example, in Louisiana where Africans provided their own drums by stomping their feet and beating broomsticks on a wooden floor in lieu of drums.

This is why one of the most liberating aspects in the Black Panther score is the use of the tama or talking drum. The tama is played throughout West Africa but Göransson was inspired by Massamba Diop of Senegal, a longtime accompanist to Baaba Maal. The distinction of using not just any drum but specifically the talking drum, is important. The talking drum is used as a method of communication and storytelling. Musicians, as part of the griot tradition, are select members of the community who pass down a musical storytelling practice. Often of the same family, they are the ones that play the talking drum to praise monarchs and remember other important people in the community. The varying pitch is achieved by placing the drum under the armpit and squeezing the flexible material lining the circumference of the cylindrical drum. It is the pitch and rhythm played that determines the message being conveyed.

Talking drums, alongside orchestral strings, are the most ubiquitous sound in the score. T’Challa’s main theme consists of up to six talking drums playing in unison. If you’ve ever heard a talking drum in person, you know that the sound of one is loud enough, so employing six must be enough to awaken the sleeping ancestors. On the second track of the score, “Royal Talon Fighter,” T’Challa’s motif makes its debut. You can hear the talking drums, in unison, play three notes in quick succession. It’s meant to mimic the way T’Challa’s name is produced and the three syllables in his name. The motif is backed by horns to emphasize the royal nature of this theme. The talking drum plays many roles since it has a recurring role in the score. It provides a solid percussive element to the music and also improvises like a jazz trumpeter because of its ability to change pitch. It truly allows the score to come to life and breathe.

T’Challa is a peaceful king, ruling Wakanda at a moment when the hidden nation must decide whether to share its resources and knowledge with the rest of the world. In addition, T’Challa is confronted with the possibility his rich and technologically advanced nation can help in boosting the rest of Africa’s economy, and empowering Africans in the diaspora who were stolen from their land during the slave trade. It is very appropriate that the talking drum, known to disseminate important messages, is the instrument that represents our hero, T’Challa.

Erik Killmonger is certainly one of the most interesting and complex characters in Black Panther. He was born and raised in America and travels to Wakanda to challenge T’Challa for the throne. He is an apathetic killer and very interested in vibranium, Wakanda’s coveted and powerful resource. Killmonger has a very, very loose set of morals and is interested in black people around the world rising up against the colonizers by any means necessary.

Killmonger’s theme is a reflection of his character. It contains elements of both Wakandan and African-American music which makes for a very unique sound. The core element of his theme is the fula flute played by Amadou from Senegal. Göransson explained to Essence magazine that "When [Amadou] started playing, he started screaming and kind of talking to his flute and it kind of made me a little uneasy. So I was like, this is going to be perfect for Killmonger as the villain. I told the flute player about his character and about where he comes from and what his intentions are and after that I just let the flute player play and he just started screaming Killmonger's name in the flute. It was kind of a religious experience.”

The music accompanying this sinister flute is a contemporary trap hip-hop beat. It’s hard to imagine Göransson wasn’t influenced by Future’s hit song “Mask Off,” considering the trap beat and flute components. Lastly, the horns and double bass play a four-note melody giving the entire track more gravitas, which is understandable given Killmonger’s capacity for destruction.

The reason Killmonger’s character is so important is that he opens the door for conversation between Africans and Africans in the diaspora regarding the effects of colonization and slavery. It’s very important that Göransson did not shy away from allowing the music to facilitate this inevitable dialogue. Killmonger speaks in African-American vernacular English and is at the same time well versed in African culture and tradition. The music had to be distinctly African-American and incorporate a traditional African element like the fula flute. Acknowledging both cultures and allowing them to play together makes Killmonger’s theme one of the best tracks in this score.

With language so deeply connected to music, is it a little confusing that the language of Wakanda is Xhosa, the accent is South African, yet the music is predominantly Senegalese inspired? Perhaps. But this doesn’t matter when you consider that the pop music of Wakanda is the minimalistic, percussion-heavy, dance-inspired South African genre called gqom. It’s clear that it’s the hippest and most popular music because whenever we enter Shuri’s lab, a gqom song is playing in the background. Princess Shuri, King T’Challa’s sister, holds all of Wakanda’s technological secrets in her head and hands. She invented Black Panther’s suit, can cure the sick, invented sneakers, and even builds the transportation used in Wakanda. She is on the cutting edge of everything and also has the coolest fashion so if Shuri is listening to gqom, it must be the future of Wakandan music.

Gqom fits Shuri’s character profile. Gqom is produced mainly using electronic instruments and software and technology is Shuri’s expertise. It’s relentless and stripped of anything that doesn’t serve the beat to move the party forward. Most importantly, it has so much swag! Check out this choreography inspired by Black Panther to gqom song “Omunye” by Distruction Boyz, Benny Maverick and Dladla Mshunqisi. “Omunye” was also played in the film.

There is so much more music present in the score and remember, we haven’t even gotten to the soundtrack curated by Kendrick Lamar. Black Panther is special because it gives so much specificity and care to the image of Africa, whether in wardrobe and costume design, dialogue or music. For more about the music, check out this featurette by Genuis of composer Ludwig Göransson breaking down the rest of the score: