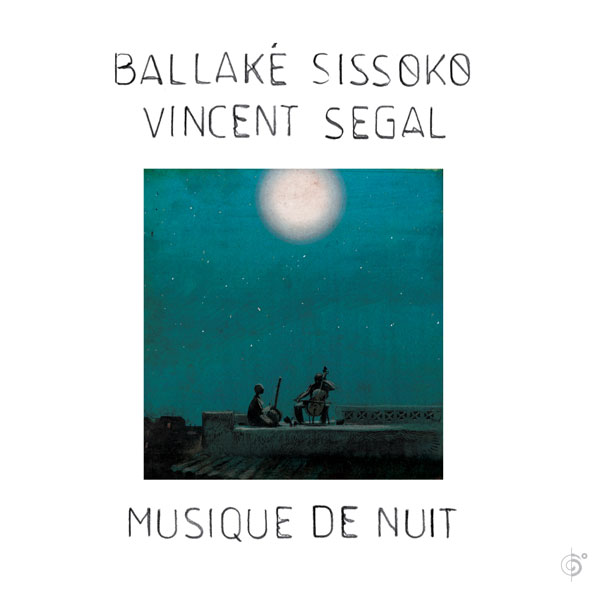 The collaboration between Malian kora maestro Ballaké Sissoko and French cellist Vincent Segal may be the most successful meeting of African and Western classical traditions yet. That is in part because Mande music, including the kora, is closer to a classical art than just about any music of sub-Saharan Africa. Griots of old had the time and support needed to devote themselves fully to their art, and a collegially competitive nature that has led to the creation of a profoundly subtle and complex repertoire of pieces and variations. But that’s not all that is at work here. Over many years of collaborating, recording and touring the world together, these two musicians have steadily deepened their intimate and intuitive connection to the point where they truly play as one.

This, their second, album begins with four tracks recorded on the roof of Ballaké’s house in Bamako, late at night—hence the title. Segal has called the rooftop session “a bit husky and raw,” but aside from the whoosh and hum of evening in the background, the music sounds quite perfectly polished to these ears. Sissoko is an excellent kora player with a resume that includes collaborations with Toumani Diabaté, Kasse Mady Diabaté, Taj Mahal and others. And Segal’s seemingly endless repertoire of sonorities makes him an ideal foil for the various textures of kora music. Segal can blend and complement the rhythmic chatter of an intricate kora groove, or anchor it with deep, propulsive bass lines. He can also garnish with smooth legato lines, or burst out with the full melodic power of the cello, perhaps the most expressive of all bowed string instruments. He can create multiple sounds at once, arriving at an amalgam so rich and multidimensional it is hard to believe that just two musicians are generating it.

The four rooftop pieces are the most satisfying here, though there’s not a throwaway moment in these nine tracks. On “Balazando,” Sissoko lays out a stately 6/8 vamp, and Segal moves through passages of punchy, plucked notes—as strong as a muscular double bass—to a whistling section of bowed overtones in which his cello evokes the njarka, the one-stringed fiddle of northern Mali. “N’Kapalema,” perhaps the standout of the session, works around another 6/8 kora vamp, but this time with a little hiccup in the melodic structure that gives the groove a distinctive, sprightly lope. The piece blooms into a particularly rich exchange, with kora locking down a driving beat and cello reaching full melodic voice before dropping into a tumble of rhythmic tapping while miraculously maintaining a drone. Just sublime.

The remaining pieces, recorded in a studio in Bamako, include a guest appearance from the renowned jelimuso (female griot singer) Babani Koné, on “Diabaro.” It’s a nice accent, a reminder of more familiar Mande performances, which generally showcase a solo singer. Then, as we return to the magically self-contained world of these two master instrumentalists, we savor their connection that much more.