Coverage of the recent troubles in the Malian north has rightly focused on the nomadic Tuareg, a long-aggrieved population that has now declared a Tuareg homeland encompassing much of Mali, including the important cities of Timbuktu and Gao. Tuareg musical artists, such as Tinariwen, Tartit and Bombino, have inevitably found themselves in an unexpected, and at times awkward spotlight. A cause these artists have long championed has advanced with breathtaking speed, but this advance has also empowered Islamists interested in imposing Sharia law, and perhaps banning music altogether. The big picture remains clouded on many fronts, and we await clarity on how the ethnic, political and religious aspects of this rebellion will ultimately play out.

Meanwhile, often sidelined in the conversation has been the fate of non-Tuareg residents of the Malian north, many (perhaps 200,000) of whom have been driven into exile.  Of particular interest, regarding the pre-history of this region and conflict, are the Songhai people, who ruled much of Mali from the city of Gao in the 15th and 16th centuries, the time of the Songhai Empire. The agrarian Songhai have known a symbiotic relationship with the nomadic Tuareg for centuries since. That harmony was always celebrated at the famed Festival in the Desert in Essakane, and later, in Timbuktu, and we hope all concerned can find a way back to peaceful coexistence. 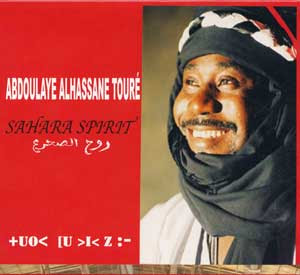 For the moment, two beautiful new recordings showcase modern Songhai traditions.  First, from a Songhai musician now based in New York, Abdoulaye Alhassane Toure's long awaited solo CD, Sahara Spirit is now available on iTunes, Amazon, and CD Baby. I say "long awaited," because Toure has been active in a variety of contexts in the New York area for the past 10 years.  In solo and duo settings, with his own group, and with Source and other local bands, Toure has delivered many tremendously moving performances.  Anyone familiar with CDs by the Niger roots band Toure co-founded, Mamar Kassey, has a sense of his prowess in the studio.  Mamar Kassey's Denke Denke and Alatoumi are masterpieces of arranging and execution, in large part thanks to Toure.

Savana Spirit blends Toure's razor-sharp arrangements of Songhai traditional pieces with his own compositions.  Toure sings with plaintiveness and warmth, while his guitar playing--mostly acoustic on these tracks--is on fire.  The songs range from simple, spare offerings of Toure on guitar and vocal (the slow-blues flavored "Aiganda") to full-on, large ensemble works, such as the mesmerizing opener, "Maiga et Toure," honoring major Songhai families.  This song, and "Humaisa," both work with the famous takamba dance rhythm, a magically polyrhythmic universe.  Toure brings in a variety of support musicians, including stalwarts of New York's African music community, such as talking drum virtuoso Idrissa Kone, one-string-lute (molo) player Housseini Chipkaou, and ex-Fela Kuti drummer Jojo Kuo, who really kicks out the jams on the most driving numbers, "Tandina," "Anine Kaina," and "Bahunai (The Art of Living)."

Even yours truly guest solos on one track.  This is an artist I have watched closely and been honored to work with, so it is especially gratifying to see him bring such an excellent recording to completion. 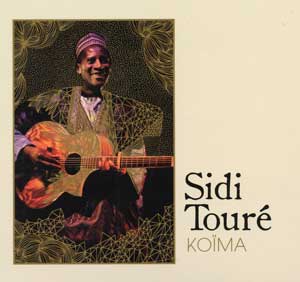 Meanwhile, another singer/guitarist/bandleader from Gao, Sidi Toure, is also out with a new and gorgeous set of traditionally inspired songs, Koima (Thrill Jockey).  This set of songs expands on the spare sound of Toure's 2010 release, Sahel Folk.  Here, we get ecstatic guitar interplay, filigree horse-hair fiddle and gut string lute melodies, and the thump and click of pendulous calabash percussion.  The ancient spirit of the Songhai Empire is present, as is the singer's aching nostalgia for the glorious days of the past.   Sidi Toure's voice conveys desert-dry resolve, along with a certain fragility, somewhere between the august grandeur of griots, and the raw, growling grit of Tuareg folk rockers.

Not since the last release from Afel Bocoum, has Songhai folklore been so effectively presented as on these two releases.  This is closer to sahel chamber music than sahel folk.  The music is indeed intimate and earthy--like the best folk--but it is also extremely subtle, rhythmically complex, and delicate in its balance of sounds.  In short, this stuff is deep and enduring--up to many repeat listens.  So if you are a Mali music lover, seeking solidarity with the country at this dangerous juncture, get these CDs and remember again the profound history and resourcefulness, and exceptional musicality, of the Songhai.  And remember that the ultimate solution for the Malian north must also accommodate and recognize them, along with the Fula, Dogon, Bozo and other long-time inhabitants of this challenged and challenging terrain.