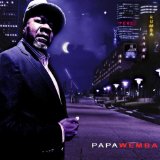 It has been nearly five years since we’ve heard new music from Papa Wemba, one of the preeminent Congolese vocalists and innovators of our time. A founding member of the original “rumba-rock” band Zaiko Langa Langa, Wemba was an electrifying presence in Kinshasa in the '70s and '80s with his buzz-saw vocal cry and ever-surprising stage outfits. Wemba went on to a maverick solo career in the '90s. That’s when he started maintaining two bands—Viva la Musica for his Congolese audience, and a Paris-based outfit for his forays into fusions with international sounds—rock, pop, Latin, and r&b. After a run of terrific recordings, including two on Peter Gabriel’s Real World label, Wemba’s career hit a speed bump in 2003 when he was charged with smuggling illegal Congolese immigrants into Europe. He spent three months in jail in France, apparently undergoing a religious awakening in the process, and emerging with a new Christian outlook.

With this as preamble, we get the 12 songs on Notre Père Rumba, in which all the complexities of Wemba’s life and art intermingle. The core ingredient, as the title suggests is “rumba”—which, in this context, means old school Congolese dance music with a Cuban lilt. The opening track “Six Millions Ya Ba Soucis” revamps this classic sound with a lush, acoustic mix in line with Congolese revival projects of recent years—Kekele, Papa Noel and others—but also some uniquely Wemba touches, notably a vocal duet with Nathalie Makoma, as much a soul diva as a rumba songbird.

The first three tracks all update older Congolese sounds. “Ziguida” has a fast and frothy groove—more chachacha than rumba—and Wemba mixes it up vocally with an all-male chorus. “Mima,” a hook-laden pop rumba, brings out Wemba’s vocal trademark, that razor-edged, keening croon that nobody else in the Congo music pantheon can touch. “Sapologie” deals with Wemba’s quasi-religion of gonzo high fashion, the cult of the sapeur. Musically, the song tilts toward an electronic club vibe with a sheen of smooth r&b. Wemba is famous for his love of Otis Redding, and delivers another satisfying Congo-soul variant on “Ye Te Oh.”

The robust “Kempa Fumbe” blends brass, guitar and voices grounded in a heavy bass groove that nods to Wemba’s home region, Kasai, far from Kinshasa’s rumba hotbed. Wemba’s Kasai roots also come through on “Mitard,” which begins in 6/8, and then veers back in the rumba direction. “Thermomètre” and “Kebo” play on the '80s' soukous-era sound.“Kebo” is particularly interesting, interspersing the familiar guitar-driven boogie with a rich vocal passage backed only by accordion and traditional percussion.

“Philosophie Ya La Vie” mixes all Wemba’s tendencies together—the r&b vibe, the rumba lilt, the layers of voices--some speaking, some singing--and Wemba himself sailing over it all as he lays out his philosophy of life. The song resolves in an elegant, slow sebene section with stinging guitar, pumping bass, and relaxed vocals and percussion—all very understated and expert. This CD is loaded with voices, spoken and sung. A lot of names go by. (Even Wemba is not exempt from the patron name checks that have become an integral part of Congolese pop.) Outsiders don’t get a lot of help on his lyrical ideas. There are no translations in the notes. When Afropop interviewed Wemba at WOMEX in 2010, he touched on this CD, but shed little light on the messages of songs, other than to say they deal with love: “I am Catholic and God recommended to all of us to love.” Enough said, I suppose, especially given the smorgasbord of musical ideas Wemba brings to the table on this long-awaited release. The bottom line is clear: Papa Wemba remains one of the most powerful and distinctive singers in today’s African music.