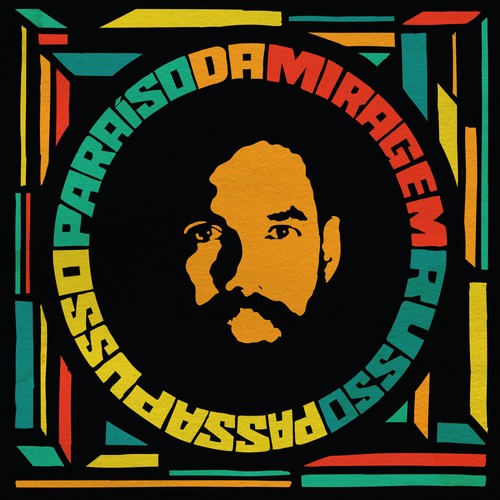 “Paraquedas” is probably one of the best songs of 2014. As Mais Um Discos’ owner Lewis Robinson noted in an interview we conducted with him in June, “It’s a great pop song. That’s the kind of pop music I want to hear.” The wonderfully named man behind that track, Russo Passapusso, has now released a full album--his debut--and it more then follows through on the promise of “Paraquedas.”

Up until now, Passapusso has been best known as the singer and MC of BaianaSystem, a band that uses the guitarra baiana (a Brazilian four- or five-string guitar, often used at Carnival) to mix local Bahian styles with dub. Passapusso's solo debut, Paraíso da Miragem (available for download or vinyl purchase on his website) has quite a different sound, though the connection to Russo's native Bahia remains strong. On the album, Passapusso mixes Bahian samba with soul and psychedelic pop to a create sound reminiscent of classic Brazilian MPB (a mainstream pop style), particularly that of Raul Seixas, a star of  the ‘70s. The record was produced in part by Curumin, a fellow psychedelically minded Brazilian multi-instrumentalist.

“Paraquedas” opens the album with soaring harmonies and searing electric guitar combining to create pure pop pleasure, while also keeping things unabashedly funky. The song transitions into “Remédio” with a short sample of a crackly old recording and an alien invasion sound effect before the eruption of a straight slamming blues guitar riff. That transition offers a glimpse of Russo’s whole aesthetic--one part pop beauty, one part killer rock/funk/samba, all with a retro psychedelic glimmer to it. The fierce sound of “Remédio" gives way to a closing bridge of tender, poetic restraint, which leads into “Flor de Plástico,” a track whose melody hits a sweet spot between pop and samba, like Jorge Benjor at his most chilled out.

Paraíso maintains a strong ‘70s vibe, but it's also interestingly varied throughout, moving from slower samba pop like “Flor de Plástico” to the upbeat psychedelic rock of “Anjo.” Even from song to song, changes in tone and instrumental flourishes--a short but memorable trombone line, funky bass playing, shimmering trippy effects--separate him from a mere imitators of earlier innovators. Further along, “Sem Sol” is less reminiscent of ‘70s Brazil than of Serge Gainsbourg’s duets with Jane Birkin, as Russo sing-speaks and Anelis Assumpção sings wistfully over a slow-moving, slightly orchestral melody.

A more overtly Brazilian sound returns with “Sangue do Brasil” (Blood of Brazil), whose organ opening leads into the high-pitched whistling sound of a cuíca backed by the tamborim (both instruments are traditionally used in samba). Then there is the exquisite funk of “Sapato,” the most dance floor-ready track on the record. The dub influence of BaianaSystem seeps into the record on the short sample-based “Devagar,” which is followed by “Matuto,” a fast-paced spacey samba-psych-pop beauty. Closing Paraíso out, Russo shows off his impressive MC skills on “Autodidata,” a track that brings the record firmly into the 21st century, just in case you need a reminder that it’s not 1973 and that this is actually one of the most adventurous and pleasureful records of 2014.