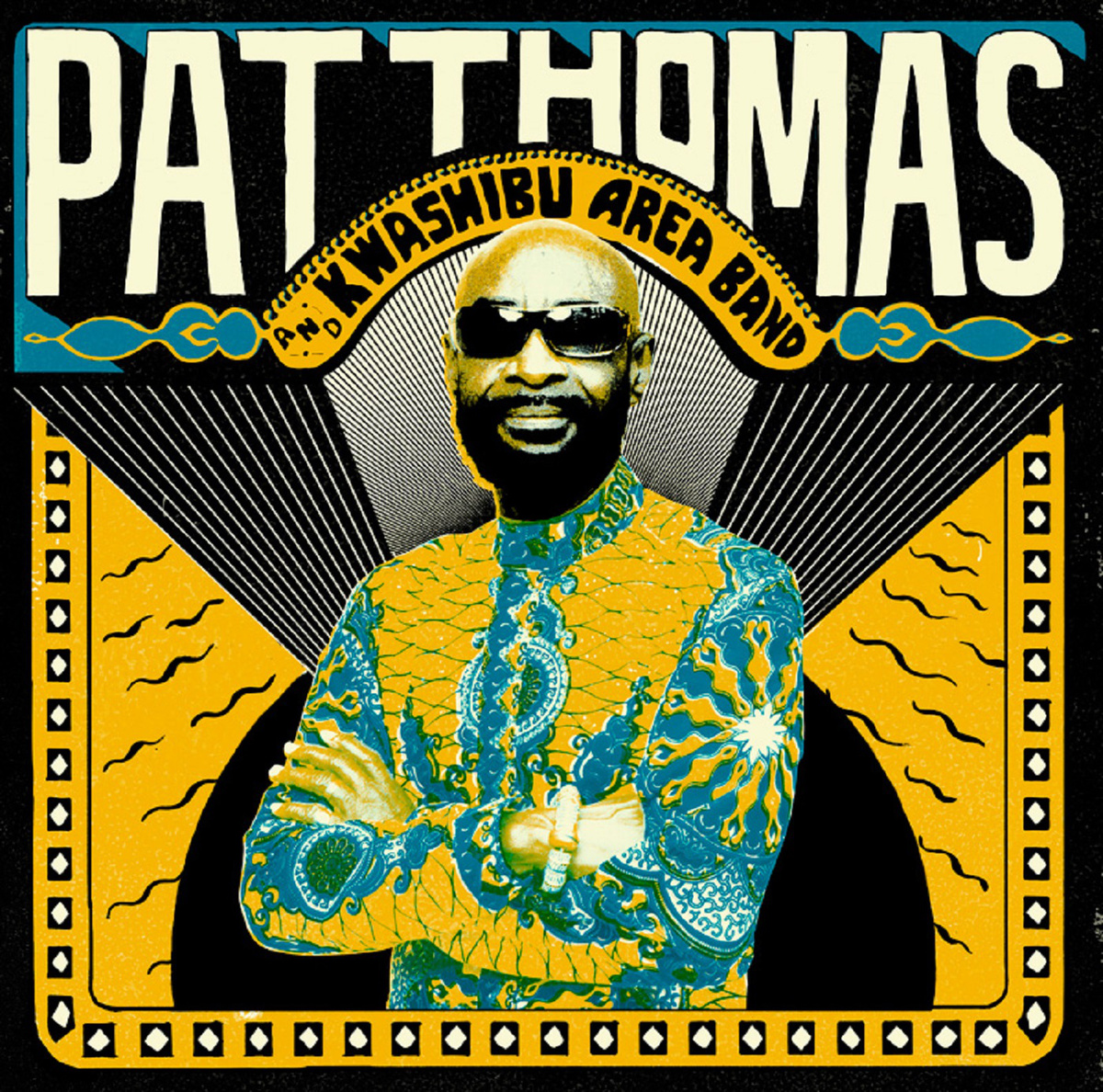 If it has taken us some time to review Ghanaian highlife legend Pat Thomas' new album, it is simply because Pat Thomas and Kwashibu Area Band is so classic and timeless that even a late review is right on time. However, Banning Eyre did interview Pat Thomas this summer and we definitely recommend you dip back into that interview for many pieces of history and wisdom from the man himself.

According to that interview, the idea to record a new Pat Thomas album came from Kwame Yeboah, who coproduced the record with Ben Abarbanel-Wolff (saxophonist in Ebo Taylor's band and member of German funk band Poets of Rhythm). Yeboah is a very busy, very talented multi-instrumentalist who plays drums for Cat Stevens, arranges and plays keyboard for highlife-pop star Kojo Antwi, and owns Mixstation, one of the best studios in Accra, among many other projects. He arranged the music on this record, and contributed tasty keyboards throughout. He put together an all-star band, including bassist Emmanuel Ofori, percussionist Eric “Sunday” Owusu, and special guest appearances from the great Ebo Taylor, Afrobeat drum master Tony Allen, Pat Thomas’ daughter Nanaaya on vocals, trumpeter Osei Tutu (Hedzolleh Soundz), and bassist Ralph Karikari (the Noble Kings). Thomas wrote lyrics and contributed strong vocals in his clear, sweet tenor voice, which sounds just as good today as it did in 1975, perhaps even more refined and confident.

The resulting self-titled album has a surprisingly classic sound, digging into some older styles of sikyi highlife and Afrobeat. The sound and style of this record diverges from the '80s synthetic Burger highlife sound (produced in German studios with Ghanaian musicians, in exile from the military dictatorship) with which Pat Thomas made his name (for example, this track: "Sika Ye Mogya."). It differs again from the English language Afro-funk of the '70s which Pat recorded with Marijata. This record is more rooted in minor-key highlife of Pat's longtime collaborator and friend Ebo Taylor. It should appeal to international lovers of vintage Ghanaian popular music, as well as local revivalists spearheaded by veterans including Ebo, Gyedu Blay Ambolley and Nana Ampadu.

From the first hits of the opening track, "Mewo Akoma," we are in classic sikyi highlife territory. The groove is carried by steady percussion, light drum accents, and funky keyboard vamps, while the bass and guitar converse around the minor chords, making a perfect bed for Pat's soaring lament about family and accepting the trials of life.

You really hear Ebo Taylor's touch on several other tunes, including "Odoo Be Ba," and "Oye Asem," which features a complex horn line reminiscent of Ebo's own classic composition "Love and Death." The funky Afrobeat groove, driven by Tony Allen, is especially in line with Ebo's recent Strut releases.

Allen's deep-pocket drums also feature clearly on the aforementioned "Odoo Be Ba" and the closer, "Amaehu." This is the most straight-forward Afrobeat tune on the record, with tasteful synth textures and lines and call and response between Pat, the backing vocals and another classic Ebo Taylor horn line:

A personal favorite is the mid-tempo highlife "Me Ho Asem," which rests on a melodic bass line that runs throughout the verses of the tune. This firm backbone is supported by light percussion and subtle drums, leaving the keyboards and guitars to complement Pat's verses. The chorus launches with a unison horn hit that elevates the song momentarily, before they bring it back into the relaxed pocket for the next verse.

The most stylistically divergent track on the album is "Odo Adaada," a fast, sunny dance tune with elements of Congolese soukous guitar and bass and creative drums:

This record announces the triumphant return of Pat Thomas as a bandleader and a force within Ghanaian highlife circles. In case you had any doubt, Ghana's "Golden Voice of Africa"--not to be confused with Salif Keita, who also has received that appellation--Pat Thomas is definitely back! Since the launch of the record, he frequently tours with his new band, and he recently recorded with Sarkodie, Ghana's top pop musician, on "Bra," a track on his new album Mary, which we also reviewed right here.