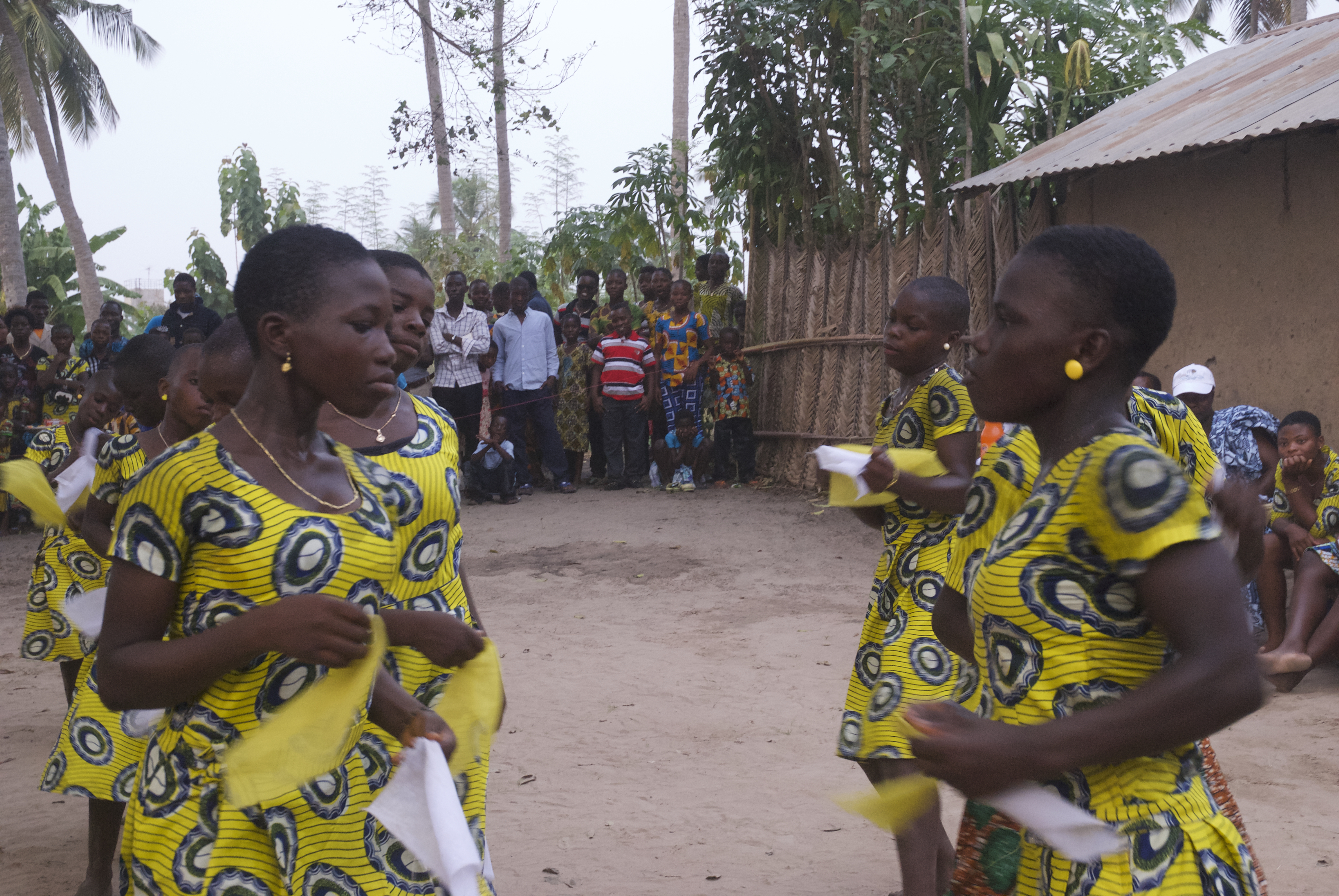 Borborbor is a common community recreational music in the Volta Region of Ghana, performed at festivals and celebrations especially around the Christmas holidays, when there are borborbor parties almost every evening. I attended a couple of borborbor parties in and around the small village of Kopeyia, near Denu-Aflao in the South Volta region.

Several hundred people are gathered in a clearing around a borborbor group. Even from a distance, you can hear the pounding drums and the brash call of the bugle. 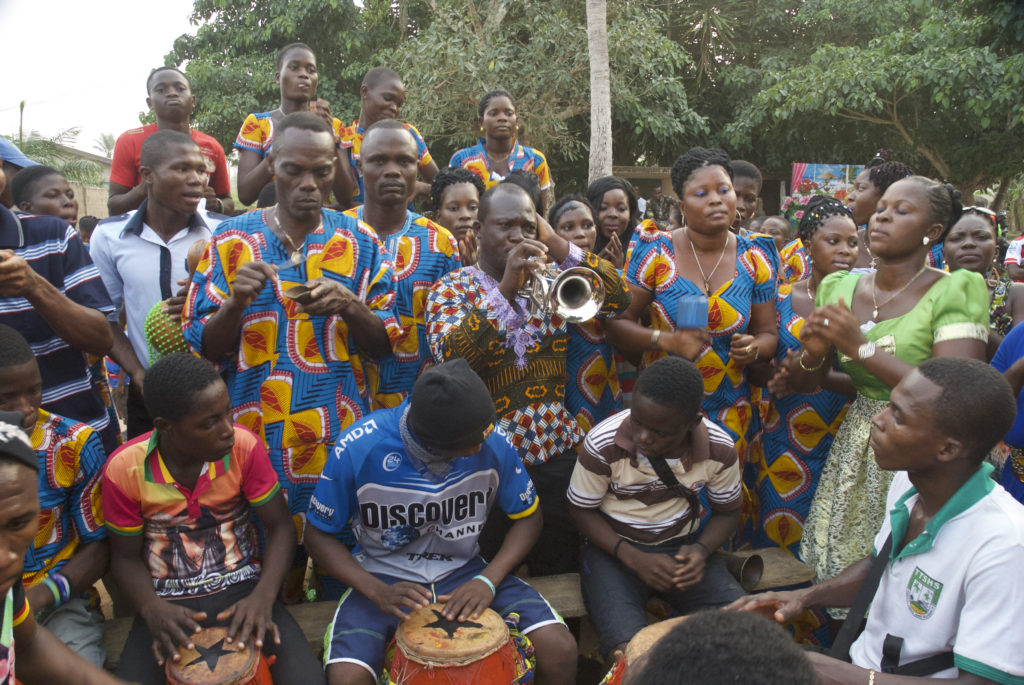 All photos by Morgan Greenstreet

The drummers face each other in a circle, communicating the frequent changes in rhythm, lifting the drums with their knees to alter the tone. 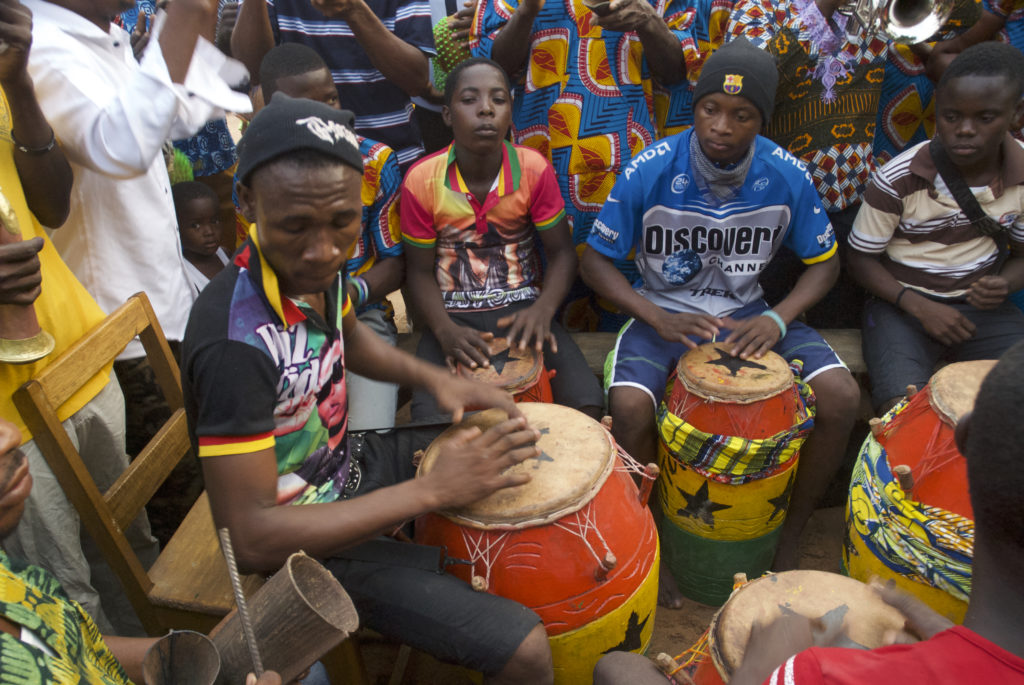 A large group of singers stand behind the drummers, and a bugle player and lead singer lean into the circle. In an open clearing in front of the drummers, a group of schoolgirls in matching dresses dance in a slow circle, waving handkerchiefs and bending deeply at the waist. 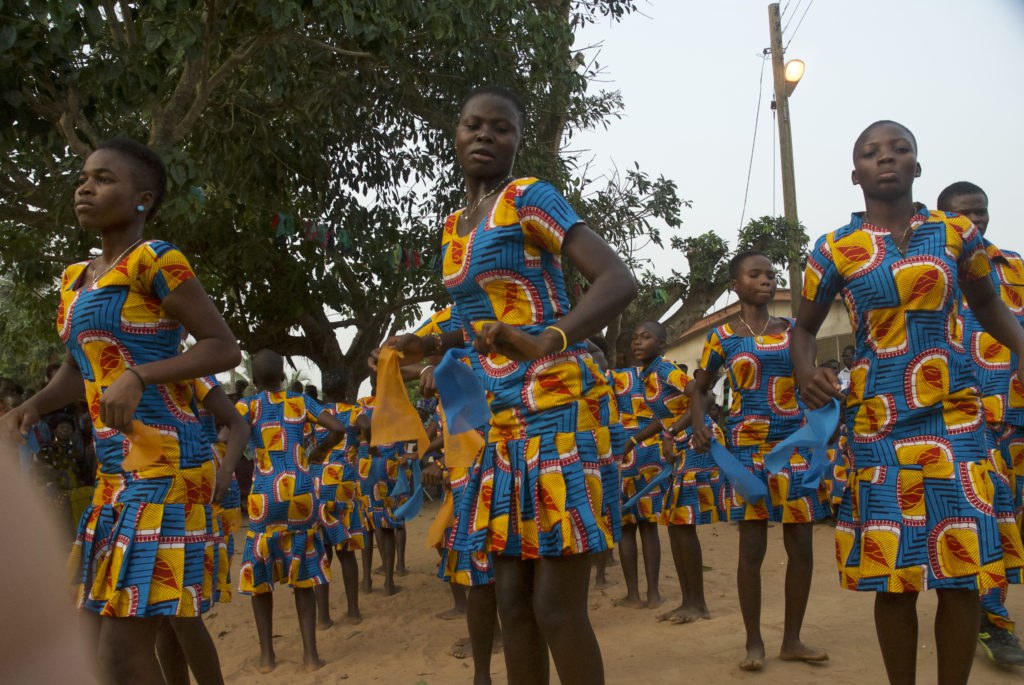 The crowd pushes in on all sides, watching the dance, singing along, talking and laughing. On the outskirts of the circle, matronly vendors sell the goods that keep the party going for hours: smoked fish snacks, sweets and of course, akpeteshi, a strong, locally distilled alcohol.

In the town of Dzodze in the south Volta Region, I visited the Nunya Academy, a tuition-free school for children, founded by Dr. Kofi Gbolonyo, a Dzodze musician who now teaches at the University of British Columbia in Vancouver. At Nunya Academy, children learn complex brass band music from Kofi's brother Prosper, and teacher Benzola Chistian Seke. 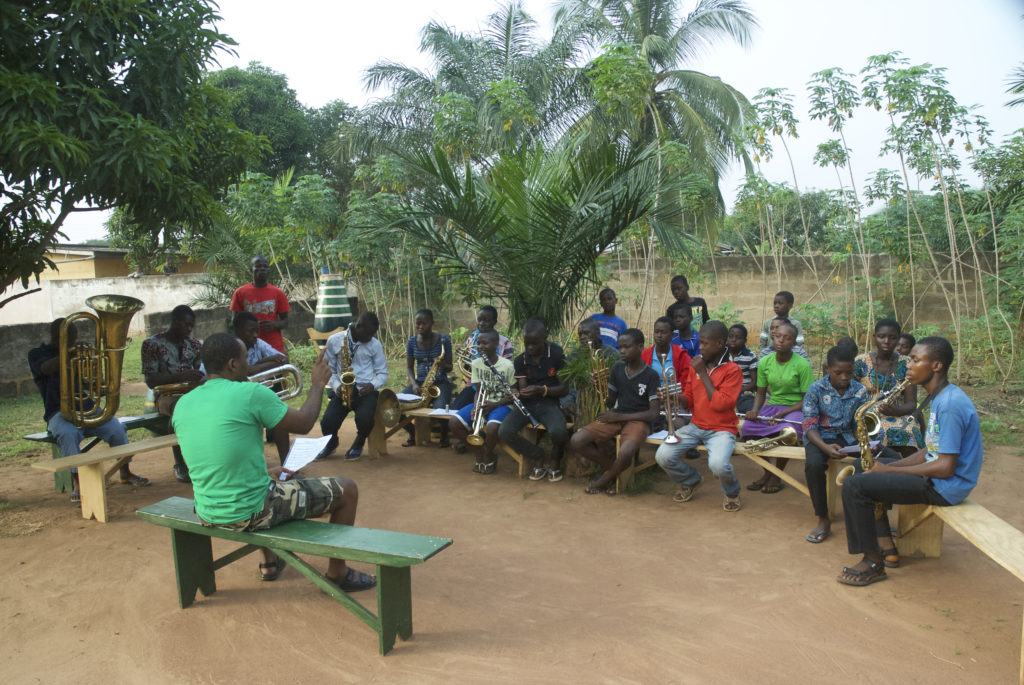 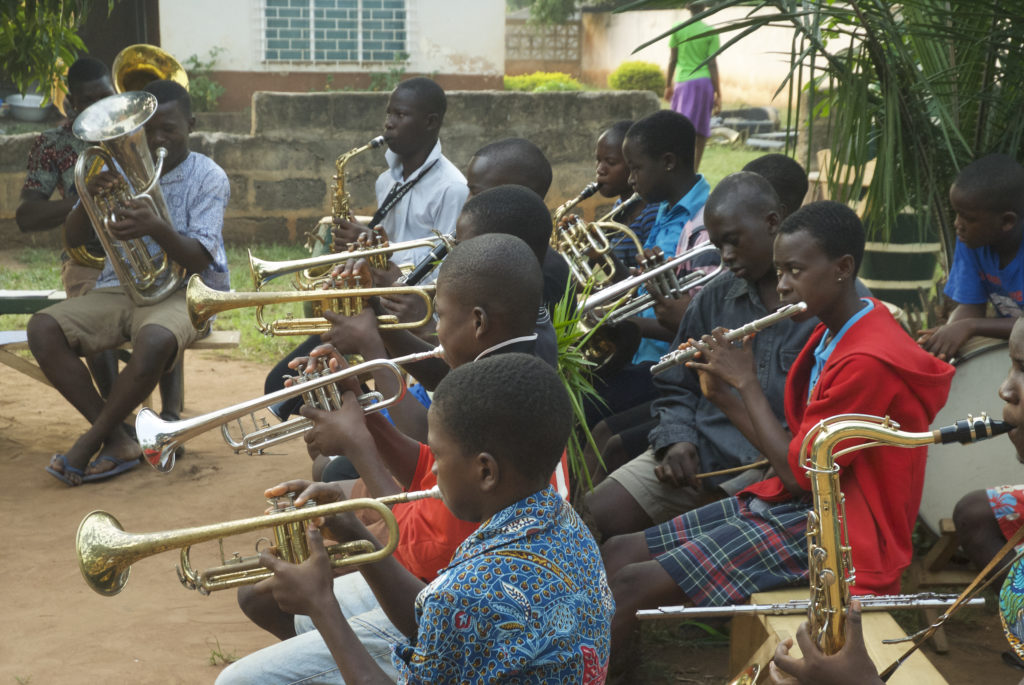 “Locally, we sing, and then we play drums on it,” Prosper told me. "But we want to incorporate that into Western music, that’s why we’re using the wind instruments to play it." Some of Nunya's arrangements were made by Pascal Yao Younge, another renowned music educator from Dzodze who now teaches at Ohio University.  "But most of them are my own arrangements, I listen to how it is performed in the traditional agbadza arena, and I arrange so you can hear the pentatonic harmony." 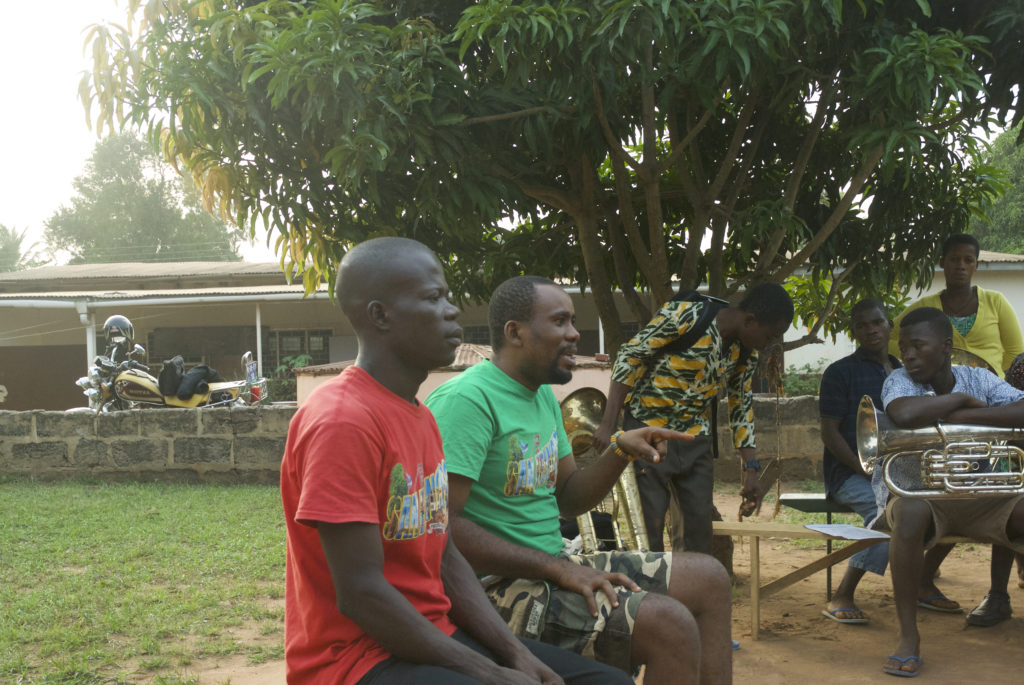 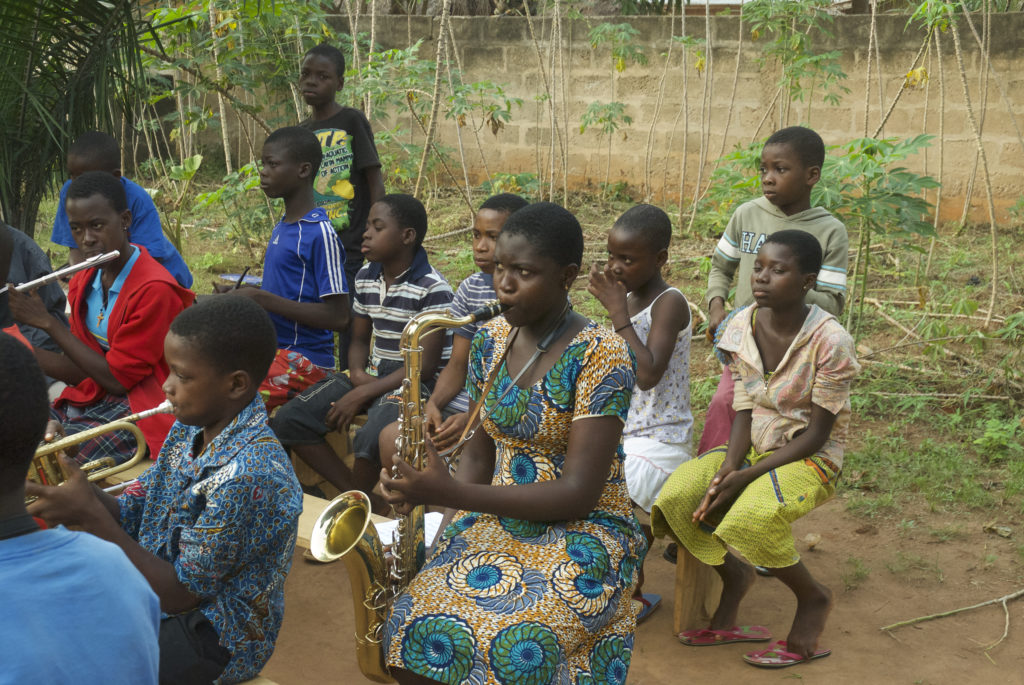 Unlike the lush south, the Northern Region of Ghana is hot and dry, especially during the winter Harmattan season. Tamale, the capital city of the Northern Region, formerly the Kingdom of Dagbon, is a bustling hub of commercial and cultural activity. The off-white minarets of the central mosque rise above streets packed with motorbikes, trucks and sometimes herds of goats and cows. Downtown, near the central market, is the red clay palace of the local chief, the Gulkpe-Naa. Chieftaincy is a big deal in Dagbon, and traditional music is alive and well, because traditional musicians are griots who perform the lineage and praise names of chiefs. In Dagbon, there's a chief for everything! For example, I attended the funeral of the chief of the butchers of the neighborhood of Lamashegu, Tamale. 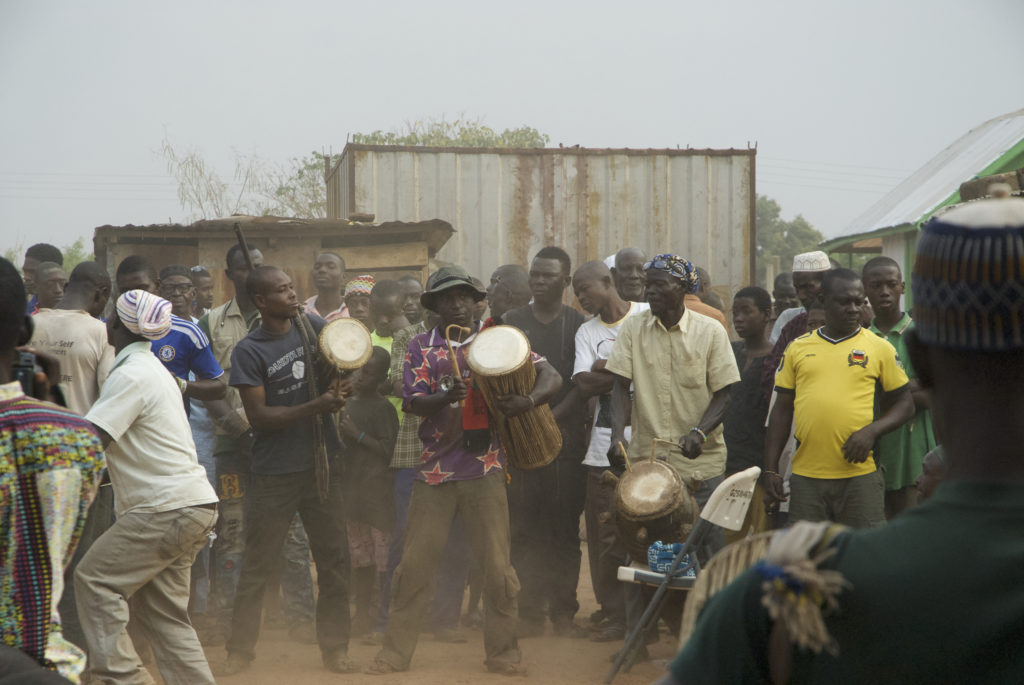 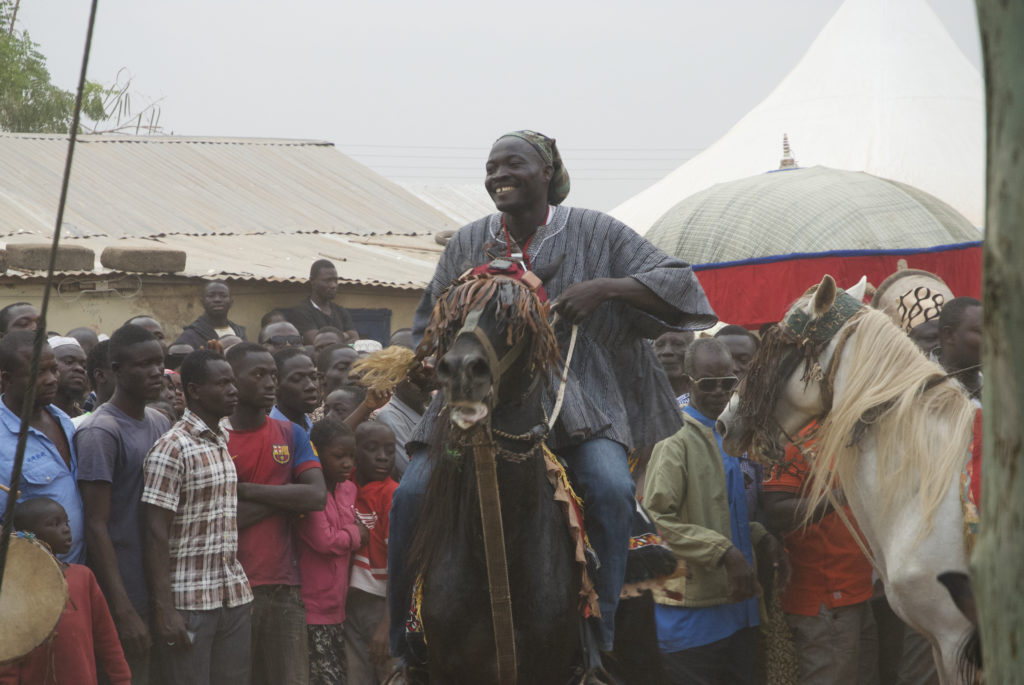 Chiefs made the rounds of the funeral compound on horseback, accompanied by musicians, crowds of supporters, and young men firing handmade muskets ceremoniously in the air.

I also attended the important Damba festival in the small neighboring town of Yendi, home to the Yaa-na, the paramount chief of Dagbon. (For more on Damba.)

A drummer's compound in Yendi. 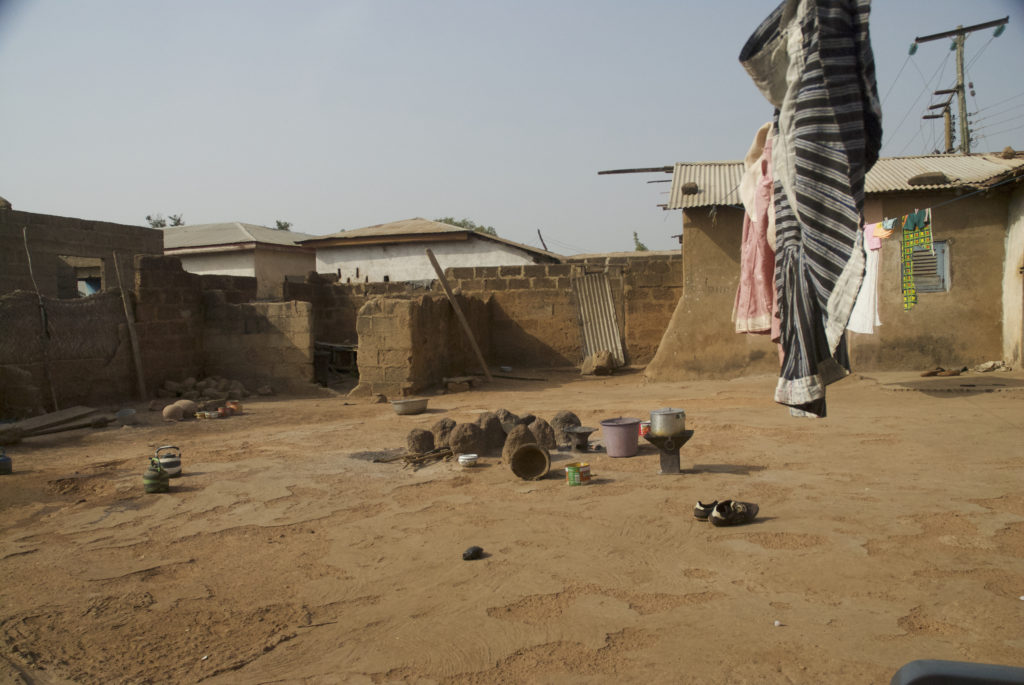 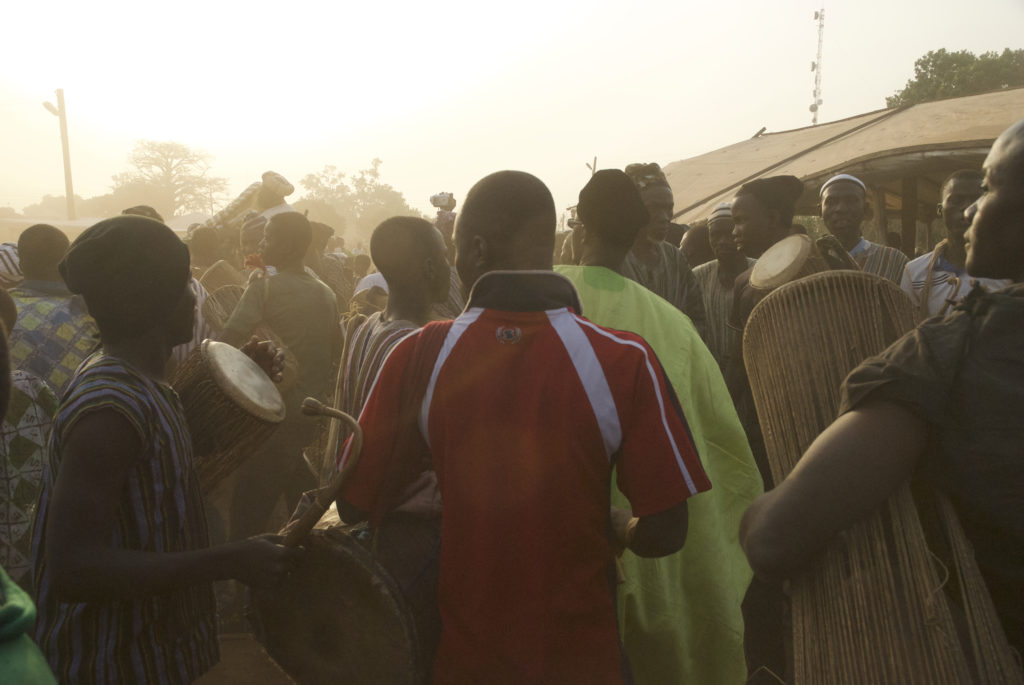 Every year, during Damba, all the subchiefs come to Yendi to pay homage, and with them come their musicians, singing and drumming their praises.

As all the chiefs gather in the central square of Yendi, different groups of musicians and spectators converge; the result is a raucous and joyful noise! 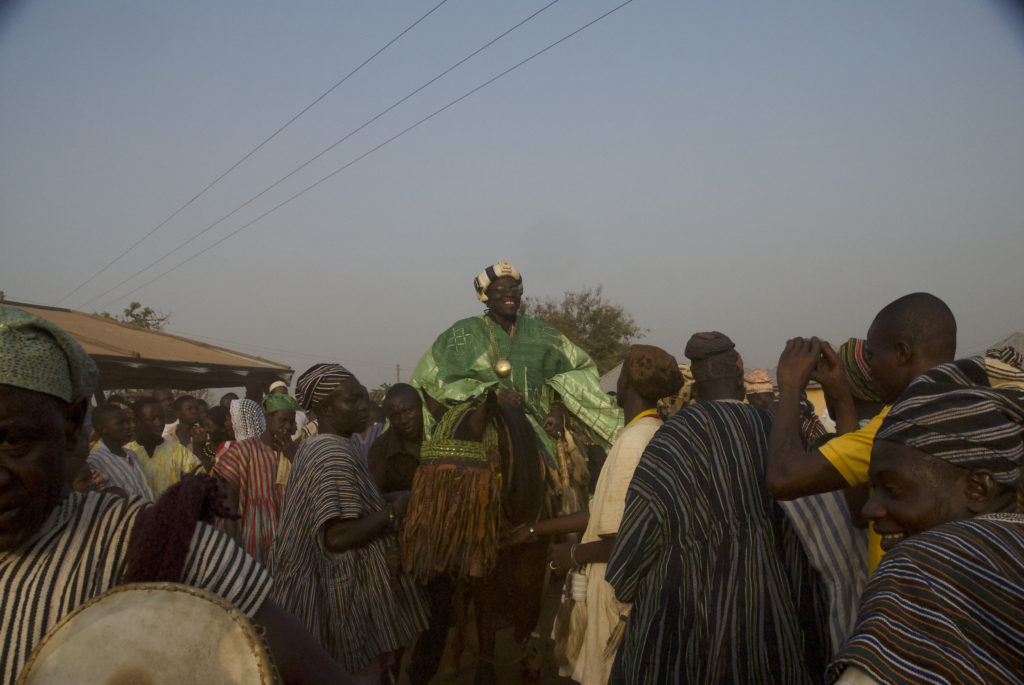 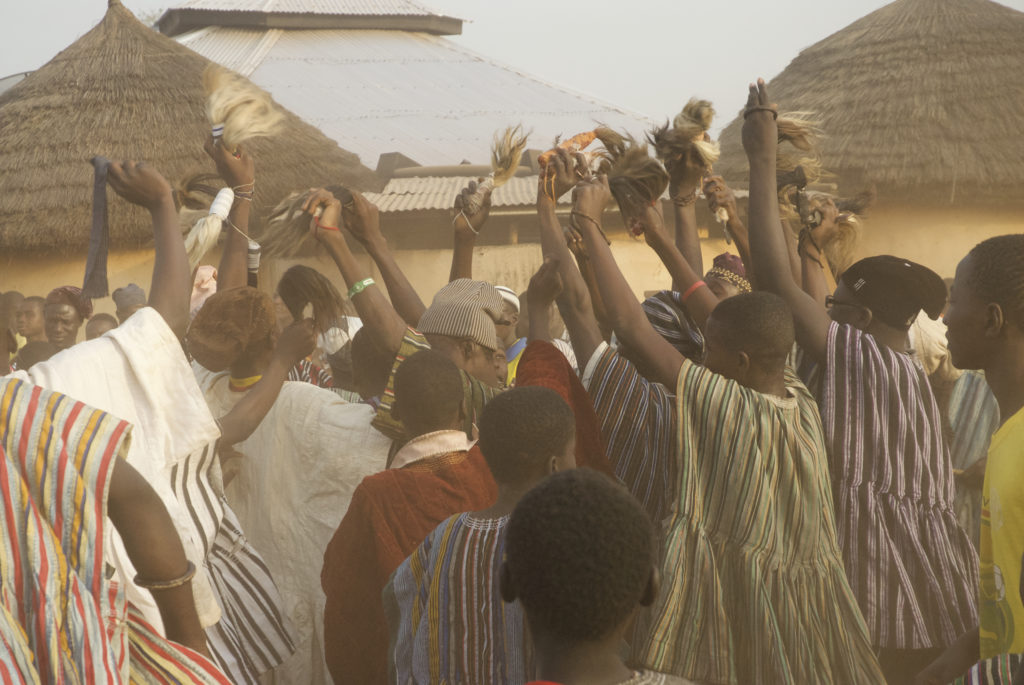 Men fire handmade rifles into the air as chiefs dance through the packed crowd on horseback, the horses rearing and kicking up dust. 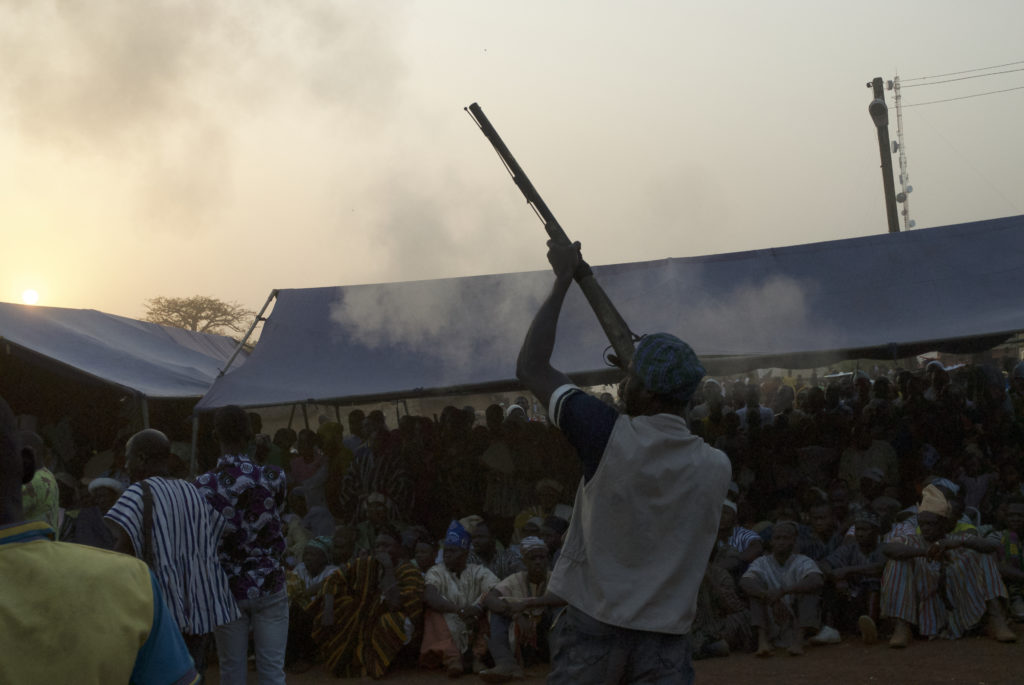 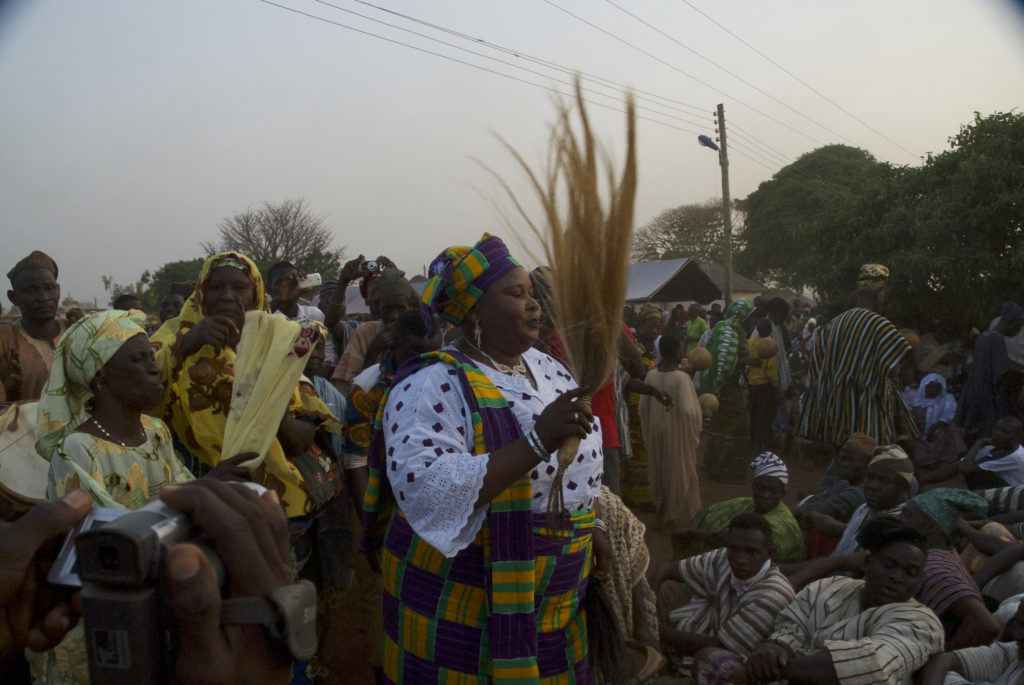 The Yaa-Naa and other chiefs. 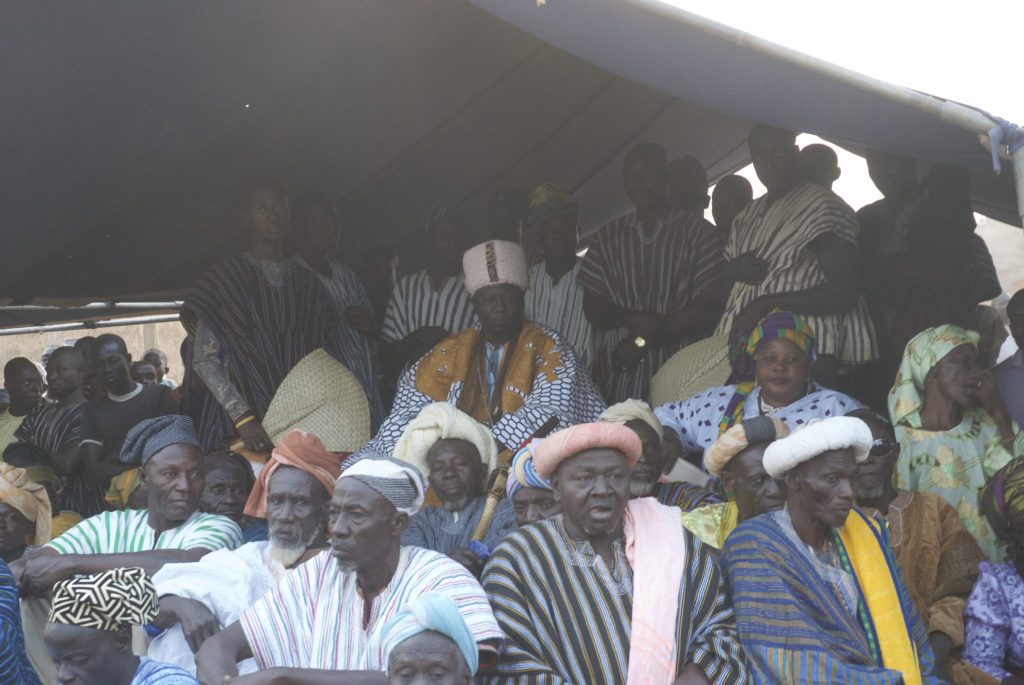