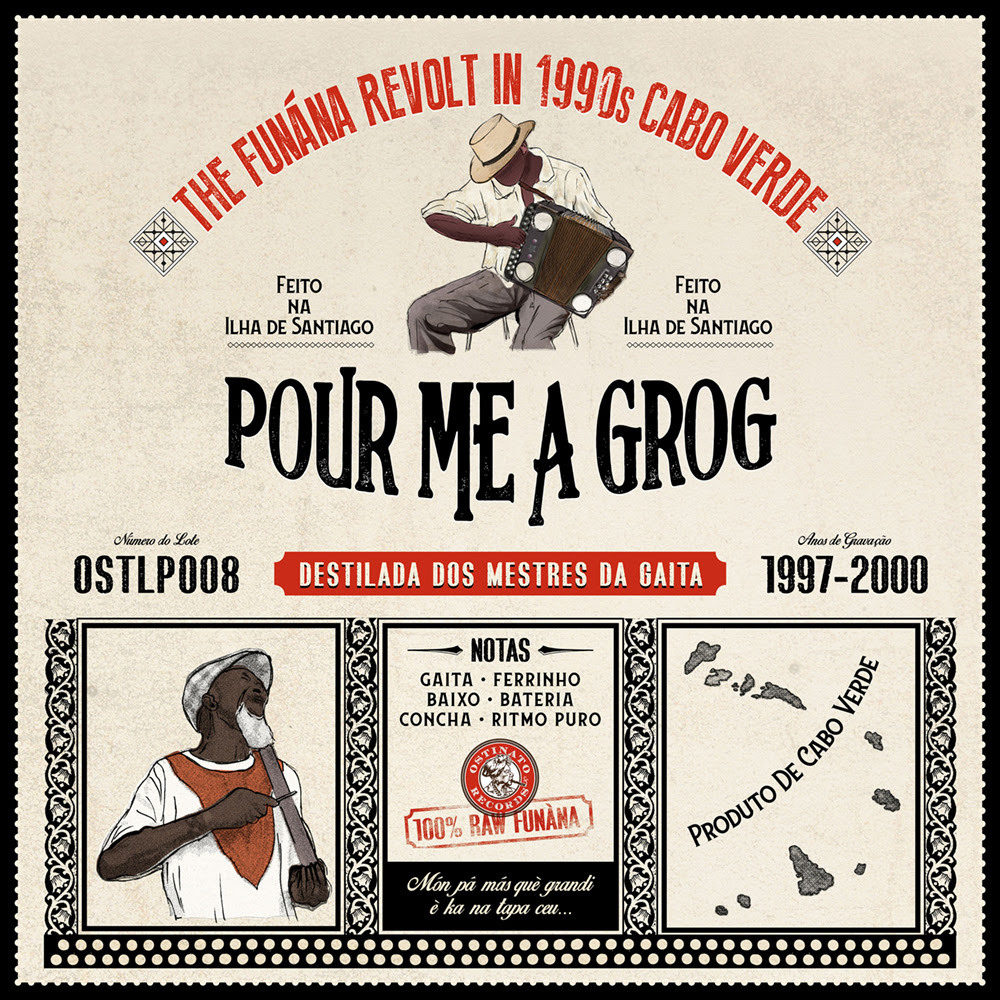 The opening riffs of accordion and pounding bass and drum hits of Ferro Gaita's “Rei Di Tabanka” announce the new compilation from Ostinato Records, Pour Me A Grog: The Funaná Revolt in 1990s Cabo Verde. With a rambunctious energy akin to punk, this relentlessly fast-paced, fervent music expresses a spirit of rebellion and catharsis. For the uninitiated, this compilation is an excellent introduction to the unrelenting power, drive and energy of late ’90s funana and for those already familiar with this lightning rod of emotion and sound, there are plenty of hits to enjoy.

Also significant, Pour Me A Grog is only the second vinyl LP release of ‘90s gaita-based funaná, after Legend of Funaná, Analog Africa’s 2016 reissue of the master Bitori’s seminal album, recorded with the singer Chando Graciosa in the Netherlands in ’97 that began the wave of recordings in the style. Bitori has a solid track on this compilation “Mô Na Máma” with Fefé di Calbicera and Graciosa sings on the standout track “Nha Boi” with the gaita virtuoso Tchota Suari. The field is widened to acknowledge the importance of younger, innovative artists including Ferro Gaita and Orlando Pantera.

The extensive liner notes include an excellent summary of the history and cultural implications of the genre by compiler Vik Sohonie and important interviews with central protagonists including Iduino, gaita player of Ferro Gaita, singer Chando Graciosa, and Valdemar Semedo Moreira, one of the producers who facilitated the funaná revolution. Funaná has its roots deep in the hills of the north of Santiago Island, it is an original expression of the Badius, the descendants of escaped slaves who live high in the mountainous north of Santiago Island, resisting colonial rule through isolation. Sung in their distinct accent of Criolu, the songs treat topics of mountain life, resistance and hardship, but also playful metaphors of sex and manhood (to this day, the genre is dominated by men.) The gaita accordion, an instrument loud enough to be heard without electricity, was given altered tunings to accommodate the needs of the musicians. Originally the gaita was used to accompany preachers in small congregations that couldn’t afford an organ, but the instrument, when accompanied by the ferrinho, a rough metal scraper, proved just as functional for the after-hours dances, fueled by grog, moonshine liquor. The word funaná itself is reputedly derived from two masters of the gaita and ferrinho, Funa and Nana. 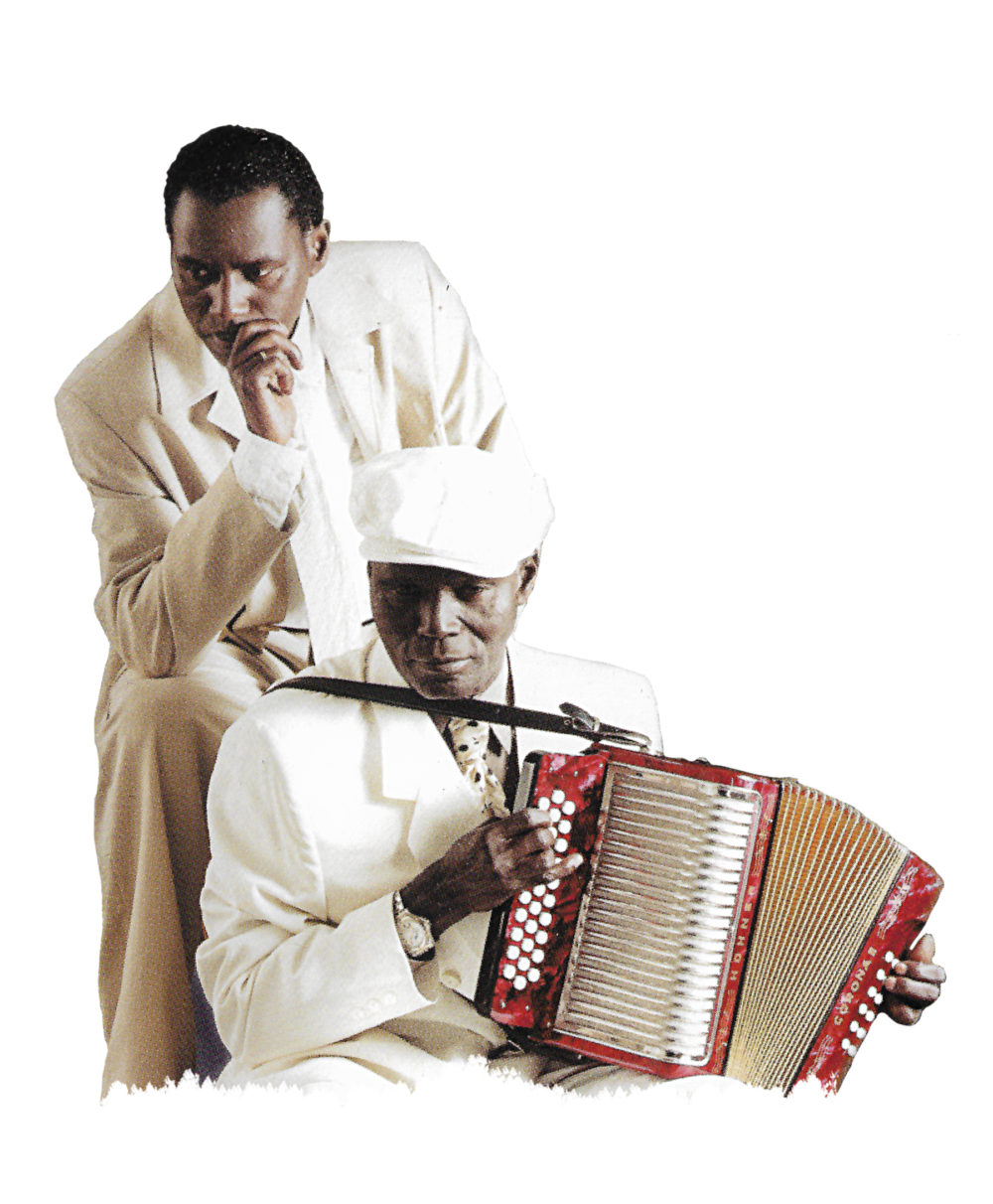 After independence, bands including Bulimundo, Tulipa Negra and Finaçon introduced funaná into their synth-driven dance music, along with coladeiras and mornas. Music of this era of Cabo Verdean music was featured in a previous Ostinato release, Synthesize the Soul: Astro-Atlantic Hypnotica from the Cape Verde Islands. Recorded in the European diaspora cities of Rotterdam and Lisbon, this music was originally released on vinyl and later cassette, but by the mid ‘90s the vinyl industry had collapsed, giving way to CDs.

In 1997, a young group calling themselves Ferro Gaita shook the country with a heavy record of pure Badiu funaná delivered with punk-rock energy. Their groundbreaking debut Fundu Baxo sold 40,000 copies in a country of 400,000 people. Their success really emboldened producers and labels to record the masters and promote the music. Iduino, the gaita master of the group is quoted in the liner notes: “In Cabo Verde, we reached a level where everything was very monotonous because they were using synthesizers, they were playing with exactly the same setup, so people got a bit fed up. So there was a ‘second revolution,’ where we got more into the acoustic style.” 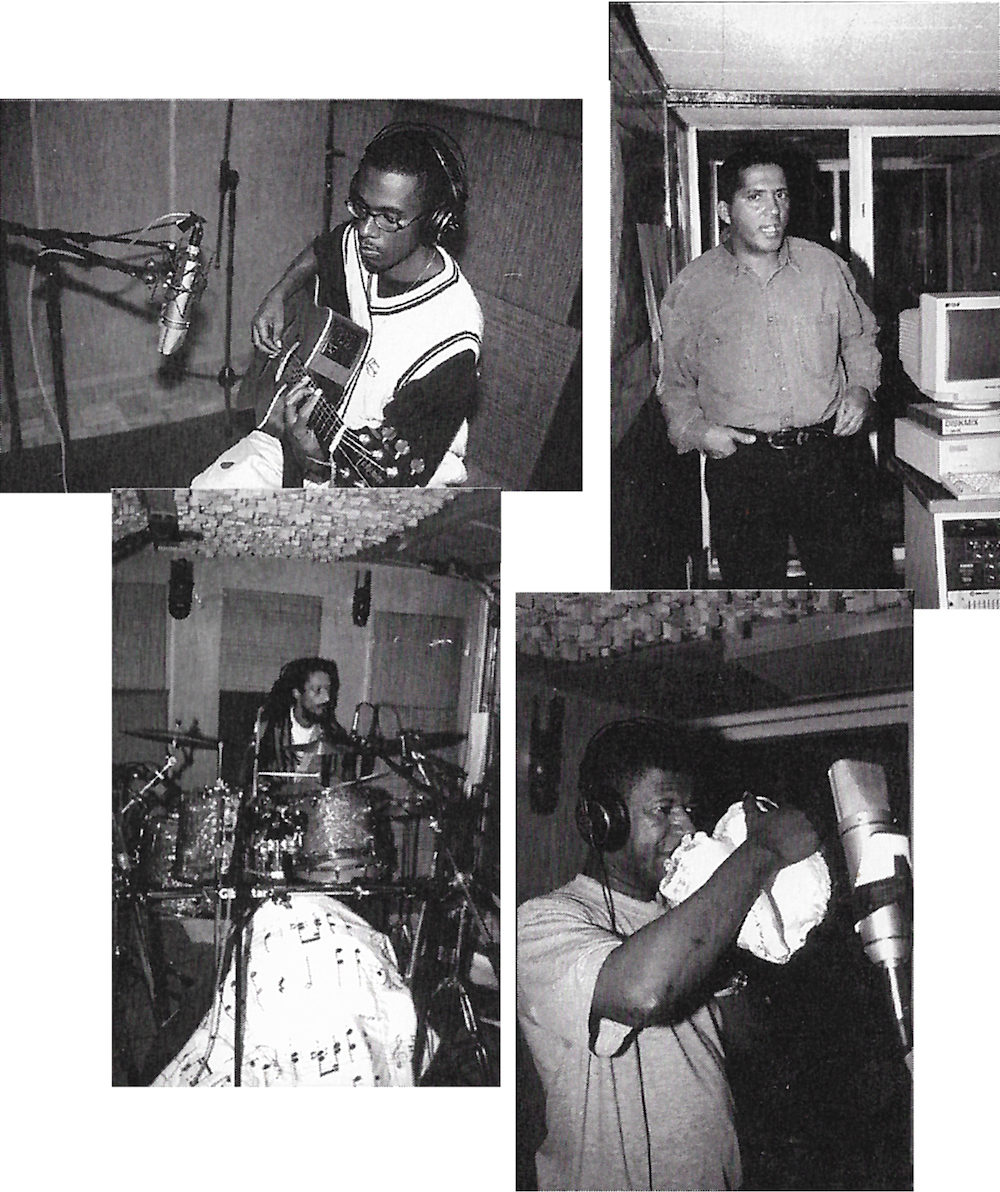 This revolution was achieved by adapting the acoustic village style of funaná to a small group format, adding a drum set, electric bass and some additional percussion, a bell and sometimes congas and conch shell, as heard on “Rei Di Tabanka.” This music was recorded in the studios in the Netherlands that had the gear to capture the raw sound of the acoustic instruments with pristine, aggressive clarity. These recording swept Cabo Verde and the diaspora, interestingly enough, at the same time as Cesaria Evora was reaching a wide international audience with her lush versions of the mornas and coladeiras. Funaná, however, has remained for the most part a strictly Cabo Verdian affair, although artists have reported that their acceptance has spread beyond Santiago, the more African-rooted island, to include the entire archipelago and the diaspora. When I saw Ferro Gaita in New York this year, the Cabo Verdian community turned out in numbers and the band tore through an energetic two-hour set as if they were half their age and not sporting grey locks and beards.

Pour Me A Grog is short for a compilation, especially compared to the proceeding double disc Synthesize the Soul. Although there are many songs from the period that could have been included, keeping the release short was probably wise considering the intensity of the music. The compilation is perhaps a bit front-loaded, with the standout tunes “Rei Di Tabanka” first and “Nha Boi” third. Orlando Pantera’s “Rabidanti” is a nice addition, as it introduces the more digital style of production that has defined much of funaná in the past 20 years. Fefé di Calbicera’s ardent “Tra Tchapéu” closes the compilation, fading out slowly, leaving the listener ready for a second pass, or a deeper dive into the wealth of funaná from Cabo Verde.