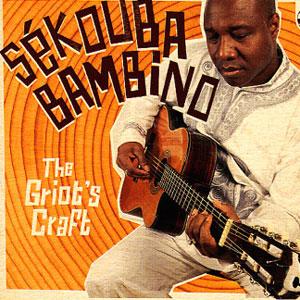 It has been awhile since we’ve heard new work from Sékouba "Bambino" Diabaté, veteran singer of Guinea’s legendary Bembeya Jazz, and probably the pre-eminent Guinean vocalist of the past two decades. This session, featuring a rich blend of acoustic instruments and superb musicianship, is a welcome update, a superb griot pop album, well worth the wait. Song after song, it’s the crispness of the arrangements and execution, the acoustic soundscape, and the seductive character of Bambino’s singular voice that does the trick.

It’s hard to over praise Bambino as a singer. On the opener, “Koumakelalou,” he unveils his silk smooth low register and works his way up to the majesty of his full-throated high end. On many of these songs a female chorus supports and answers him, in traditional fashion. Elsewhere, he goes alone, with minimal backing—not much more than a kora and acoustic guitar—as on “Kadete.” Irresistable.

Most of the time, Bambino projects overwhelming serenity. But on one song, “L’Excision,” we feel his pain. Bambino is singing on behalf of women subjected to female genital mutilation (excision). He sings his disapproval in French at one point in the song, determined that no one miss his meaning. Others West African singers, mostly women, have taken up this cause, but it remains a sensitive issue. So kudos to Bambino for stepping up. This battle is far from won, and singers with his stature are probably as well positioned to make progress as anyone.

The ensemble here is exceptional, whether launching into a Latin romp (“Kaba Mousso”) or a tripping 12/8 village groove (“Diatiguya”). They deliver gorgeous performances throughout, full of chiming, jangling melody and briskly rolling rhythms. Harouna Samake of Salif Keita fame on kamele ngoni is a special plus.

Worth noting. Bambino recently put out a far lesser, electric studio album called Innovation. With its overwrought electronics and stiff machine rhythms, that release reprises the most misguided efforts of Paris Afropop in the late 1980s. Innovative it most certainly is not. Truth be told, The Griot’s Craft doesn’t break much new ground either. No worries, though. Music this sweet is beyond mere innovation. It’s timeless.