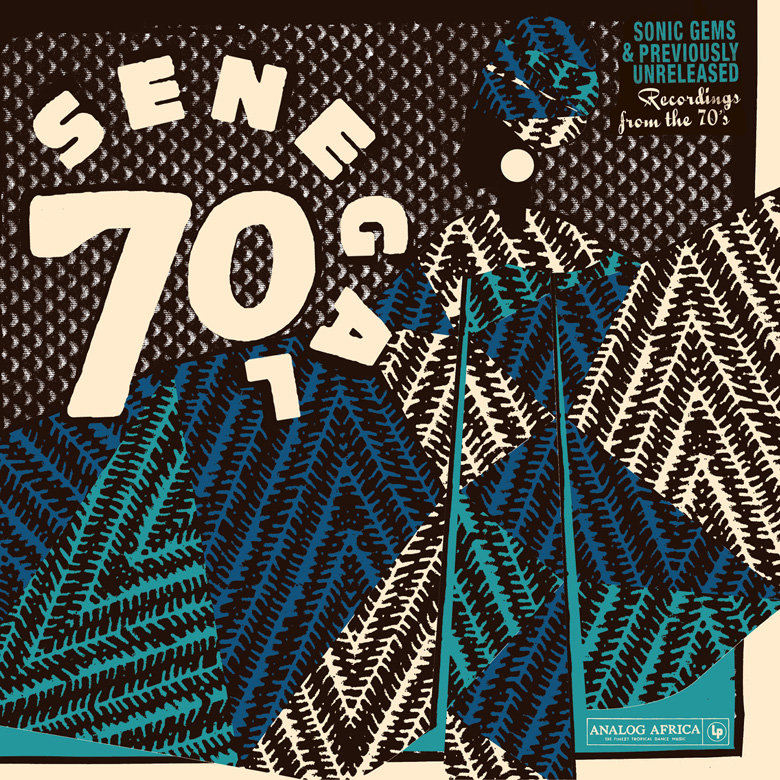 Analog Africa's new compilation Senegal 70 has been on heavy rotation at the Afropop office, and in the personal listening space of this reviewer. Why? Mainly, because it feels like an album, not a random assortment of tracks from a given time and place. Every track is relevant, necessary and contributes to the whole. Compiler Samy Ben Redjeb knows how to select from a huge quantity of rare or previously unreleased music to make a compilation that is more than just a window into a historical moment of time, place and style; it is a balanced, crafted collection of tracks from numerous artists that belong together on the same album. This is the Analog Africa tradition, a blessing to music lovers.

Senegal 70 is a partnership with the  Teranga Beat label, which brought us the recent reissues of Guelewar, Mar Seck and Dieuf Dieul de Thiès. Some of the tracks on this compilation come from a vast archive of previously unreleased music recorded on reel-to-reel tapes in the 1970s by Moussa Diallo at his legendary Sangomar club in Thiès, and recently digitized by Adamantios Kafetzis, the Greek founder of Teranga Beat. Additional tracks from other relevant groups in 1970s Senegal are also included. The result is a swinging mix of vintage Senegalese musical experiments, full of African-American funk influences, and Cuban and Nuyorican salsa styles, but with distinct local approaches.

From the opening track, "Mariama," from Fangool, we know we're in special territory. The singer's deep, rich voice rises in melancholy arcs over a slow funk rhythm, pulsing keyboards and guitars, and playful congas.

The pace picks up with the Afro-funk track, "Africa," from Orchestre G.M.I., still guided by the conga drums, but introducing guitars as a strong solo instrument. Next up is "Thiely" from Orchestre Bawobab, more commonly known as Orchestra Baobab. This excellent group has had a revival in recent years, putting out new albums and touring widely. "Thiely" captures them in the early stage of their career: The song is classic Senegalese-style salsa, with guitars playing the montunos, and a somehow pleasantly out-of-tune tenor sax interweaving with nasal vocals delivered in a localized Spanish. The group is featured again with "Ma Penda," a slow soul ballad that kicks into uptempo funk-rock for a fuzzed-out guitar solo, showcasing another side of their repertoire.

"Bour Sine" from Le Sourouba de Louga introduces the local mbalax elements of fierce sabar and tama drumming, jumping off the grounded bass and drums. Only one other track here, "Ariyo" from Dieuf-Dieul de Thiès, has such a strong mbalax rhythm, always pushing forward with strong Wolof vocals, tricky horn blasts and nimble guitars and drums.

One of the highlights of this compilation is "Villa Marvillas" from King N'gom, one of the stars of Senegalese salsa, who had a truly international career that led him to Ivory Coast, Benin, and later, Mexico. Read more about his history on the excellent blog Orogod.

The tune starts with a playful vocal vamp reminiscent of a boogalú, following the vocals in fits and starts. Then, with a flourish of guitar, it kicks into spirited salsa that borrows the chorus of the famous Cuban son "Que Bueno Baila Usted" by Benny Moré, although the words are sung phonetically, so they come out a bit changed. In his "inspirations," the singer uses Spanish as a tool for expressing an emotion that is beyond words. The guitar takes over for a memorable solo that simultaneously references the unique rhythmic style of a Cuban tresero while adding delicious jazz runs.

By this point in the compilation, we're feeling great, comfortably in the sonic world of Senegal 70. Orchestre Laye Thiam keeps us in the mood with a percussion heavy instrumental 6/8 jam, "Massani Cissé," driven by wah-wah guitars, rolling bass and drums with jazz/blues-style organ and guitar solos, and sharp trumpet leads.

Next up is the Cuban classic "El Carretero," interpreted in phonetic Spanish by Amara Touré, a singer and percussionist from Conakry, Guinea who made a name for himself in Dakar with Le Star Band de Dakar. For more, check out the recent Analog Africa compilation of his music.

You may be familiar with this tune from the Buena Vista Social Club version; Touré's version is mostly distinguished by the instrumentation: tenor sax and guitar instead of trumpet and tres.

The salsa continues full force with "Kiko Medina" from Le Tropical Jazz, featuring blazing trumpets, one of the most iconic rhythmic breaks in salsa music. "Kokorico," by Orchestre Laye Thiam, is another highlight which combines so many of the elements and influences that run throughout this compilation: Over a funky guaguancó tumbao, the singer chants in English, "Kokorico is the call of togetherness; we call it hide and seek, it's the game we played when we were young," before kicking off the funky salsa with James Brown-inspired shouts. The organ solos are classic soul-funk while the guitar and bass keep the salsa rhythms strong until the end, when they straighten out into a funk breakdown.

Orchestre Laye Thiam closes out the album with "Sanga Té," a surprising hybrid of West African, Latino and Arabic influences: The track opens with a Ghanaian-style highlife guitar phrase, supported by a typical highlife keyboard rhythm; the drums keep it simple, while the bass and congas imply salsa rhythms and the vocals soar over the top, singing, of all things, "Salaam alaikum, salaam."

In the years after independence, Senegalese musicians took inspiration from international styles of salsa, son, Afrobeat, highlife, funk and jazz, and made them their own through careful assimilation and experimentation with local instruments, rhythms, languages and aesthetics. Senegal 70 demonstrates that the resulting local hybrids can be distinct, relevant, touching and exciting for listeners decades later, and for decades to come.