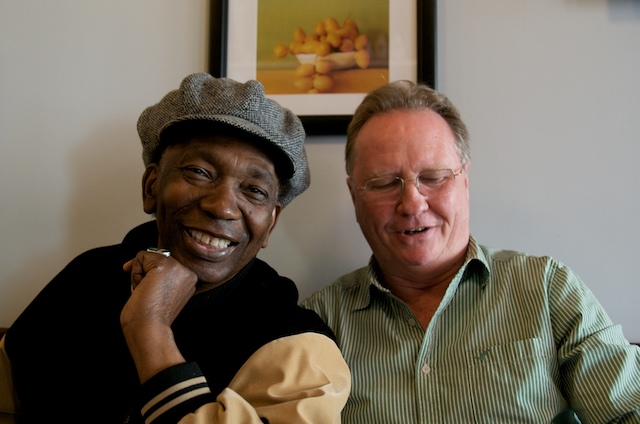 Blog May 30, 2012
Simon Bright and Thomas Mapfumo in NYC for Debut of Bright's film "Robert Mugabe... What Happened?" 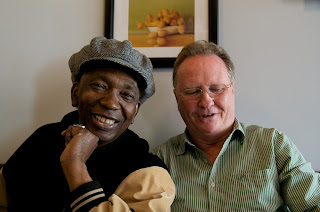 On May 17 at the New York Institute of Technology, a new film by Zimbawbwean filmmaker Simon Bright had its US debut before an overflow house.  The film, Robert Mugabe… What Happened?, offers a succinct and powerful recap for Robert Mugabe’s public career from his early political rise in the nationalist movement of 1960s, through his eleven-year imprisonment, his key role in the Zimbabwean liberation struggle, his triumphant election in 1980, and the twists and turns of his ultimately disastrous 32 years leading Zimbabwe. This event was organized by three enterprising young Zimbabwean living in New York, and featured a panel discussion that included, among others, both Bright, and the Lion of Zimbabwe himself, Thomas Mapfumo, en route from a trip to South Africa, heading home to Oregon.

For all their differences, Bright and Mapfumo have things in common. For instance, both are, Thomas quipped, “former Rhodesians.”  More to the point, both have traveled the road from supporting Mugabe to opposing him.  “My family was against the Rhodesians,” recalled Bright. “I refused to fight the Rhodesian war. And so, Mugabe was my hero in a way, as he was the hero of Thomas Mapfumo at one time. Mugabe enabled me to come home to Zimbabwe, to the new Zimbabwe, to work in the Ministry of Agriculture, to work on resettlement programs. He brought me home.”Bright’s film reminds us what the world once loved about Mugabe, his eloquence, his apparent humanity, and the solid achievements of his early years in power, including tremendous advances in health, education and, surprisingly, land resettlement. “Zimbabwe in 1980,” recalls Bright, “up to about 1995, was the most successful development story Africa has ever seen. The fact is that there was significant resettlement, redistribution of land in the early 1980s. And it was very well done. It was well planned. It was well executed.” Farmers learned skills and produced bounty. But by the time economic austerity became the order of the day in the 1990s, Zimbabwe had abandoned its land program. The next wave of resettlement would be destructive and disorderly, done at the point of a gun starting in the late ‘90s, and accompanied by no organized strategy to make the land productive.

The title of Bright’s film invites a kind of personal analysis of Mugabe. Is a he a good man gone bad? Or was he fooling us all along? A good part of the discussion following the film focused on this line of thought, until some in the audience objected on the grounds that too much attention on the man obscures the truth of the country. Bright essentially agrees. The characters in his film differ on Mugabe’s nature. Some feel that power changed him.  Others—and Thomas Mapfumo falls into this camp—say he never changed. Circumstances simply forced him to take off the velvet gloves when his power was threatened. 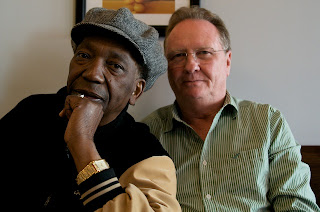 Wherever one comes down on that issue, Bright feels the best way to evaluate Mugabe is by his deeds, and two loom particularly large: Gukuruhundi, the massacre of Ndebele people in the early ‘80s, which Bright calls a “genocide,” and Murambatsvina, the bulldozing of opposition neighborhoods in Harare in 2005, that displaced some 700,000 Zimbabweans. “The events speak for themselves,” says Bright, and his film’s presentation of these episodes, told with stunning archival footage, is both gripping and heartbreaking to watch.

Bright, like Mapfumo, is now in exile from Zimbabwe. Bright left after being imprisoned for no clear reason in 2004. He returned surreptitiously to film interviews with close associates of Mugabe, mostly fellow freedom fighters. Their remarks are both perceptive and persuasive, and as hard as the Zimbabwean state press is now working to discredit this film by discrediting its witnesses, the clear-eyed recollections and measured conclusions of these first-hand witnesses are difficult to dismiss. Bright risked an automatic 20-year prison sentence (for bringing members of the government into disrepute) in gathering material for this film, and the fact that it so riles Mugabe’s paid press, is but one indication that the effort and risk were worthwhile.

The discussion that followed the New York screening was both passionate and chaotic. Some viewers were uncomfortable with the idea of a white man making a film about black history. This is ironic given that a key message of the film is that Mugabe set out to make a non-racial state, and then resorted to outrageously racist rhetoric in order to divide his opposition. The power of Mugabe’s divisive tactic was literally on display as some questioners preferred to talk about the race of the filmmaker than deal with the content of his film.

“One of my objectives in making the film,” said Bright, “was to break down this division, as I talked about, the way the Western media demonizes him, he demonizes all the opposition. You have this kind of incredible polarization, which suits Mugabe very well. And so in the film, you have white ministers saying what a great president he was in the 1980s. You have people who are his comrades in arms explaining what a terrible job he's made of running Zimbabwe. Basically, what I wanted to do was to show the full complexity of the situation, and of the history, and then the audience must judge for themselves.” 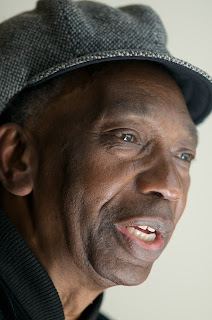 Some in the New York audience were keen to air their views on globalization, austerity, South African politics, and other ancillary topics.  At times it was a struggle to keep the focus on Zimbabwe.  Mapfumo—introduced and addressed here as Dr. Mapfumo, in recognition of his two honorary degrees—stirred up controversy when he suggested that England and the US owed it to Zimbabwe to help oust Mugabe, by force if necessary. This idea found little support on the panel or in the room, but in a sense, it was a rhetorical device on Mapfumo’s part. If the crimes of Saddam Hussein and Muammar Gaddafi merited military intervention, surely Mugabe’s did as well.  It should be remembered that Mapfumo is a singer, and an inveterate gadfly, not a political analyst. He actually seemed quite pleased to stir up a ruckus.  “They can call me anything,” he said afterwards. “But I won't stop talking. I will keep on talking. Call me what you can call me.”

Earlier in the day, Thomas expressed his admiration for the three, young organizers of this event.  So called “born frees”—Zimbabweans born after 1980 and so having no memory of the war—these three are unusual in their political engagement.  Thomas told one of them, Nyasha Gutsa, “This is your fight now.  You are the young generation. You have to keep it up. Try and bring more youngsters into this project, so that the world can hear and can also get the knowledge of what is happening in Zimbabwe, because this story is being told by the Zimbabweans.”

Bright says that in recent decades, as much as 25% of Zimbabwe’s people, including many of its best and brightest citizens, have left.  Gutsa notes that if this force could organize itself, it could affect future events in Zimbabwe.  “There was a report,” he noted, “that said $700 million comes out of South Africa in remittances to Zimbabwe, keeping that economy afloat. Diamond money is not enough to keep Zimbabwe going. [A recent discovery of diamond wealth has been a windfall for the regime.] So, people are surviving because we are sending money home. And I think that is also a grant of admission, and I think it would be fair for us Zimbabweans living abroad to be represented in parliament.”  No surprise, in current constitutional talks, Mugabe and his party are firmly resisting any steps that would empower Zimbabweans outside the country.  But as Bright, Mapfumo, Gutsa and others involved in this remarkable evening in New York made clear, there are still ways they can resist, and fight for positive change in Zimbabwe. 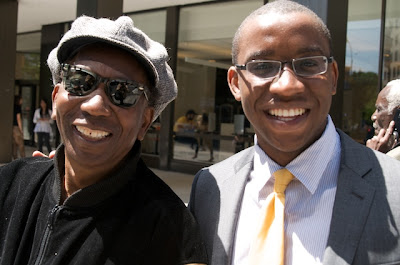 Hip Deep December 14, 2017
Thomas Mapfumo 2: The Mugabe Years
In recognition of the end of Robert Mugabe's 37-year rule in Zimbabwe, we are rebroadcasting our program on the career of Thomas Mapfumo during the Mugabe years.