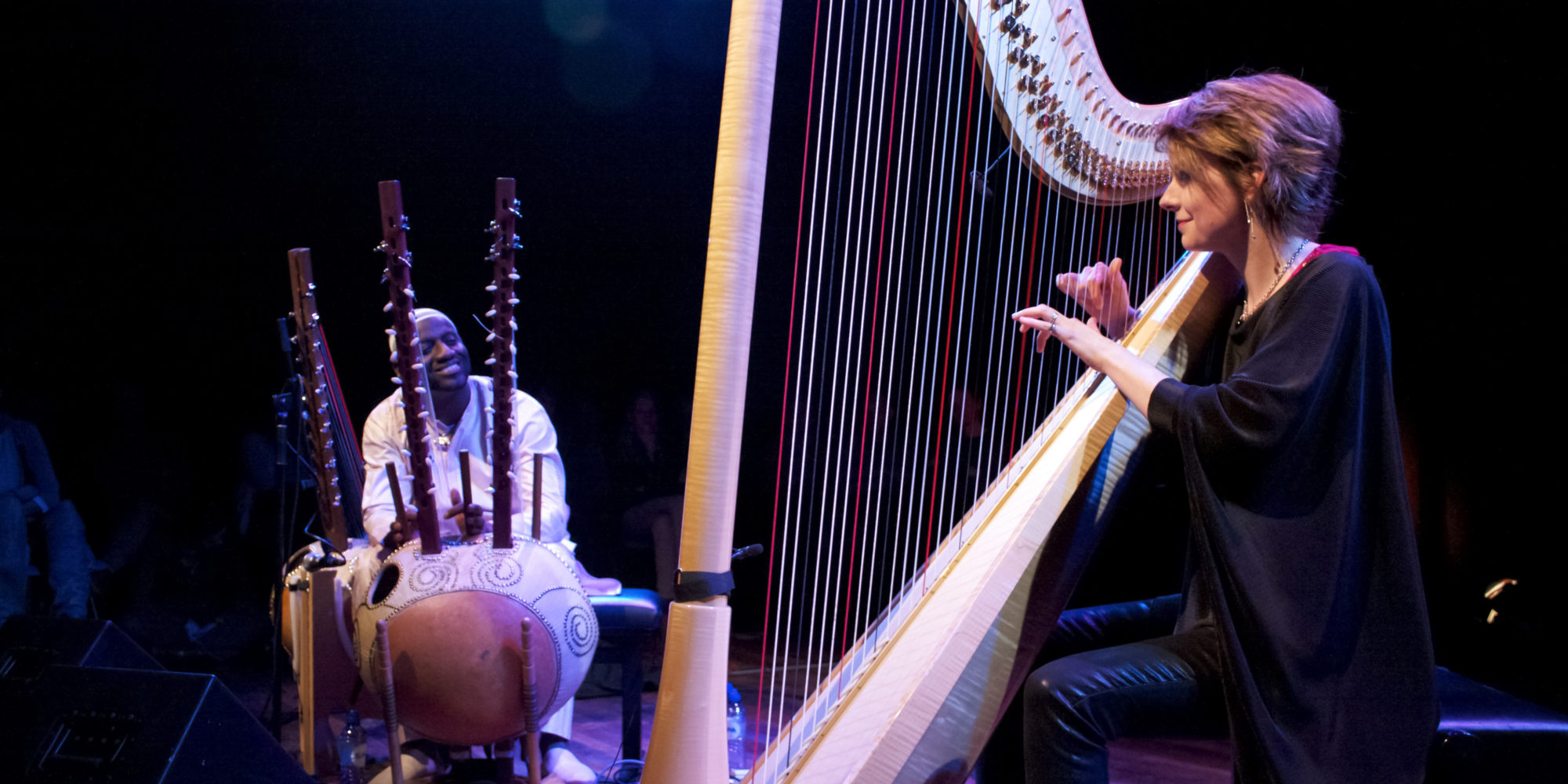 Soar is a heartbreakingly beautiful duet performed by virtuoso players based in nations a continent apart on instruments that look completely different yet sound uncannily similar. The Welsh harp and the West African kora have long been compared to each other: Here, with Catrin Finch and Seckou Keita’s second album, we once again can hear directly just what an intricate and mutually stimulating combination these two instruments make when played ensemble. And when music is also composed by the artists, or takes variations from their musical heritages, the result is a waltz of cultures joined at the hip more profoundly than one might imagine. And as we find out, there is good reason for this.

The timbre and sonority of the kora and harp are just different enough to identify them on these exquisite recordings, the kora being slightly sharper in tone to the mellow cadence of the large Welsh harp. This is really useful as both are plucked stringed instruments with plenty of arpeggios and glissandos in frequent use in their respective traditions. Finch and Keita also have great synergy in their styles, but have the discipline to give each other plenty of space when needed.

Nowhere is this more evident than on the opening track, “Clarach,” where dramatic opening notes expand into cascades that tumble down as if through the cathedral vaults of the mind, all held together with a slow minor-key bass line on the deep end of the harp. It is honestly one of the most profound musical experiences this reviewer has heard. Here and elsewhere on the eight tracks of Soar, Finch and Keita exchange solo and accompanist roles with a deft awareness of each others' styles and traditions. This isn’t so much jazz as structured improvisation, and the overall pocket belongs neither in Wales or Senegal, but is the result of the synergy between these two great players.

This meeting of the minds is augmented by the material. If it is African in inspiration such as “Yamba Ba” (composed by Seckou’s uncle, the great kora player Solo Cissokho) or “Teranga Bah” (meaning "hospitality" in  Wolof), then those roots are to the fore, augmented and interpreted in turn by Finch’s Welsh experiences. Likewise tracks like “Cofiwich Dryweryn” (in memory of the flooding of a Welsh village to make a reservoir) start with a decidedly European folk/classical motif to which Keita brings his African stylings. Right in the middle is “Bach to Baisso,” that merges two great classics from each culture. An excerpt from Bach’s Goldberg Variations is seamlessly melded with "Baisso,” usually reserved for very experienced kora players to play for royalty and high society in Senegal and Gambia. Here and elsewhere there are occasional sparse vocals from Sekou, himself descended from royalty.

The bottom line is that this is not an album for a dance party, but rather for an armchair and a moment to reflect on the more creative and beautiful things that humans of different persuasions can achieve when they come together and exchange their differences as gifts to each other. The musicianship and empathy between Catrin Finch and Seckou Keita is extraordinary and on full display on Soar, illustrated in a gorgeous video on YouTube performing “Clarach” that says it all.

The song title “Clarach,” by the way, is the namesake of an osprey that recently returned to Wales from West Africa to rear her young chicks, making the 3,000-mile migration for the first time since the 17th century, when there was a large population of this majestic bird of prey in the Welsh hillsides that had since been hunted to near-extinction. Where birds fly, maybe ships can sail, so this harmonious meeting may not be a mere flight of fancy after all.

Released April 27, 2018 on the Bendigedig label