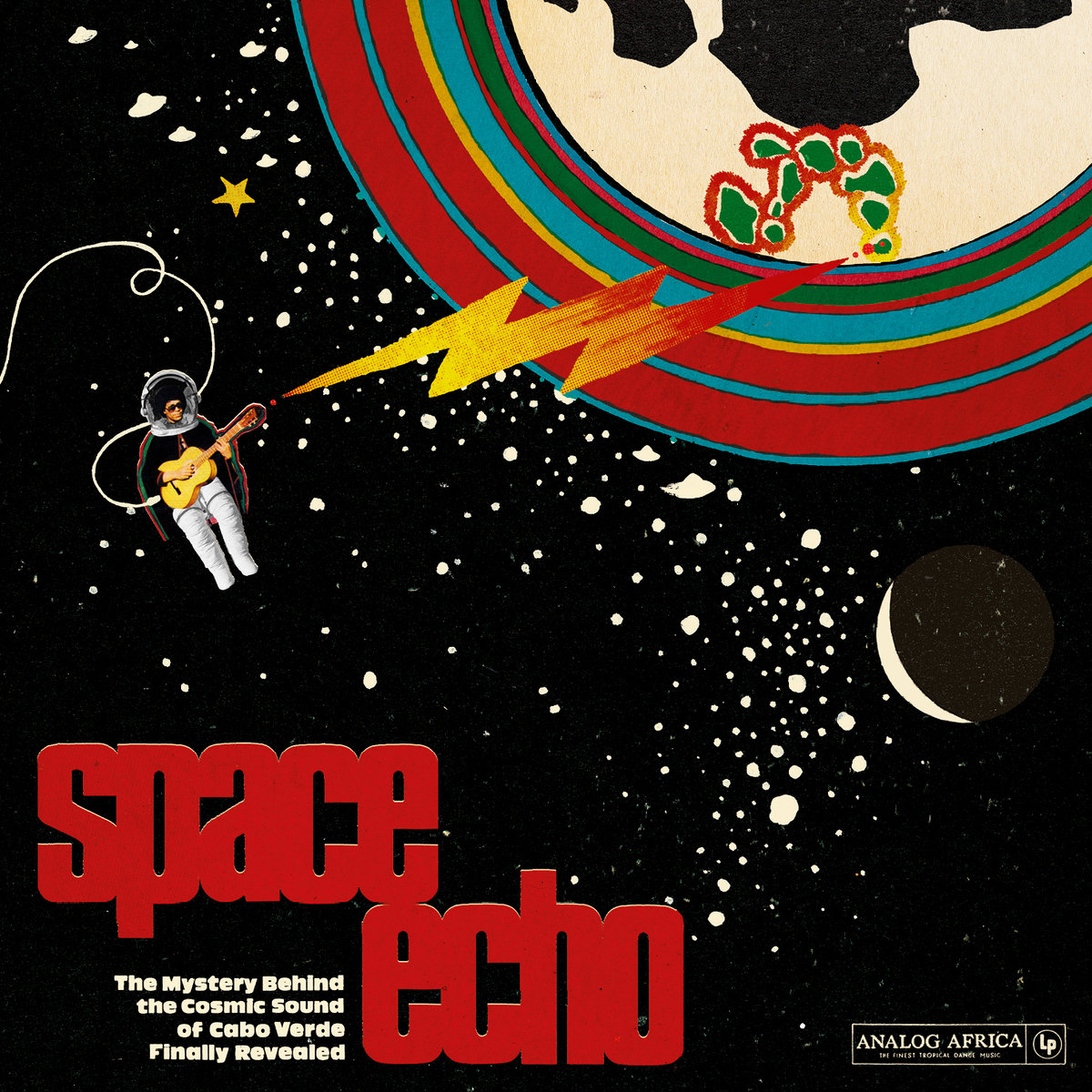 Reviews May 24, 2016
Space Echo: The Mystery Behind the Cosmic Sound of Cabo Verde Finally Revealed

For a nation with a population barely larger than that of Staten Island, the quantity and quality of music that comes out of the archipelago of Cape Verde is astounding. With the late, great Cesaria Evora as its internationally revered figurehead, the Cabo Verdean music scene is a hive of creation, formed by a seemingly endless cast of extremely talented, creative musicians, playing plaintive morna, energetic funana, batuque, hip-hop, and much more. Although it is one of smallest countries of the world, it is third in music sales in the “world music” market, and well deserving of that status. How is it that these islands host such a critical mass of musical excellence? Perhaps it’s the nation’s complex history as a crossroads of many cultures, perhaps the excellent weather, maybe something in the water. Or, as some stories might suggest, Cape Verde is recipient of some very cosmic musical endowment.

The liner notes of the spectacular Space Echo: The Mystery Behind the Cosmic Sound of Cabo Verde Finally Revealed compilation (Analog Africa) tells us this fantastic story: A cargo ship left Baltimore in 1968, loaded with the newest synthesizer technology, bound for an expo in Brazil. It disappeared from the radar that same day, appearing months later, by the grace of some power, in a field in the middle of the Cabo Verdean island São Nicolau, miles from any coast. The ship obviously attracted much attention–it was scoured by colonial Portuguese scientists (Cape Verde wouldn’t gain independence from Portugal until 1975), whose best guess as to its origins was that it “fell from the sky,” which was already obvious to the locals. However, they did detect “traces of cosmic particles” on the ship, very similar to those on meteors, which naturally would suggest the improbable idea that the ship fell from outer space.

The mystery of its arrival ever present, the celestial gift of hundreds of Moogs, Farfisas, Rhodes, and the like was recovered from the ship’s containers and distributed across the nation to areas with electricity, forever changing the future of Cabo Verdean music. It was noted that children of the schools where the synths were distributed “inherited prodigious capabilities to understand music and learn instruments.” Analog Africa reports that one of these children was Paulino Vieira, a musical genius who, “by the end of the '70s would become the country's most important music arranger.” Eight of the 15 tracks on this album are backed by Vieira’s band, Voz de Cabo Verde, which helped shape the “cosmic sound of Cabo Verde” that continues to this day. Whether or not you choose to believe the origin story of that cosmic sound (why one would want to reject such a good story, I can’t imagine), the sound itself is undeniably hot, innovative and irresistible.

This generation of cosmic Cabo Verdeans like Vieira took the insistent, highly danceable rhythms and harmonic structures of funaná and fed them through the channels of synthesizers, to varying degrees. Some of the cuts on this compilation, such as “Odio Sem Valor” by Pedrinho, saturate themselves with the thick buzziness of early synths, leaving drums and vocals as the only acoustic elements. In others, like the supremely funky “Corre Riba, Corre Baxo” by Abel Lima, synths take a backseat to a mostly acoustic funaná feel. The first track, “Pinta Manta” by Antonio Sanches, opens with a crescendo of a relentless, simple synth-driven funaná rhythm, joined at its peak by stuttering guitar, a spacey synth melody and a commanding voice. It’s a very germane aural entry to this world of stellar grooves, astral synths, and divine voices.

The sound dropped into Cape Verde in 1968 often has the feeling of both the early years of psychedelic rock and the contemporary use of cheap synths across the world of music. Tracks like “Mino di Mama” by Quirino do Canto share kinship with the warbly meanderings of Nigerien synth master Hama and Ethiojazz pioneer Hailu Mergia. (For a fleshed-out story of synthesizers in African music, turn your ears to our program from last year.) “That Day” by Fany Havest evokes the sound of enigmatic Nigerian electronic music innovator William Onyeabor, in synth sound and timbre of his English vocals. “That Day” is a fascinating song, with an Onyeabor-meets-James Brown tune sandwiched between a slow, soulful blues intro and outro. This rather unexpected jumping between genres crops up again in “Po D’Terra” by Joao Cirilo. The tune begins with some killer '70s American psychedelic rock guitar and keys à la Hendrix or Santana, then makes an abrupt transition to funaná, with some bluesy Rhodes keyboard peeking through. It’s almost like the musicians wanted to pay homage to the influential American music that was surely coming out of their radios (perhaps thanks to our own Georges Collinet) but felt like they had to stick to their homegrown sound–the sound that has kept Cabo Verdean dance floors grooving for a long time.

Besides the focal point of cosmic synths, Space Echo also shows off some excellent instrumentals, namely guitar and horns. Tight horn sections trumpet lyrical melodies in “Morti Sta Bidjàcu” and converse fluidly with the singer in “Ilyne.” Upbeat rhythm guitar drives many of the songs, but tracks like “Mundo d’Margura” feature lovely, nimble lead guitar work, dancing lightly in reflection of the sinuous vocal lines so present in Cabo Verdean music. The singer on “Pontin & Pontin" brings the sinuousness of the distinct morna sound, of which Cesaria Evora was queen, a style that feels intimate and always somehow wistful.

Space Echo takes us on a rich and marvelous journey, from Baltimore to Cabo Verde via outer space, traveling through an electric, engrossing and diverse landscape of synth-saturated Cabo Verdean music. Every track is a welcome gift from whatever cosmic powers brought that ship to São Nicolau in 1968. Released on May 27 by Analog Africa, and you can pre-order it here on CD, vinyl or digital download.