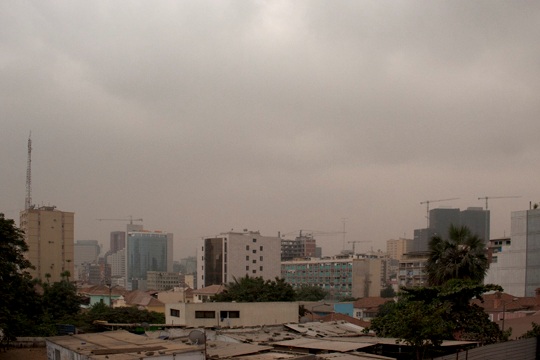 Hip Deep co-founder and senior correspondent Ned Sublette recently completed a three-week stay in Angola, and is in production on Hip Deep Angola, a four-episode special slated to air as part of Afropop Worldwide beginning in September.

SPIRIT OF ANGOLA  is part of that project -- a blog that illustrates his experiences visiting Angola’s capital city of Luanda and, in the north of the country, Mbanza-Kongo, epicenter of the historic Kongo culture and religion.

It often looks overcast in Luanda during the cacimbo, the wintertime dry season that lasts from May through August. But it’s not going to rain. It’s the winter weather -- sometimes it gets down in the 60s-- and it's the foggy time of year, and these days the fog is smog, dense with dust and exhaust.

Prior to 2002, Angola had war in its territory for forty-one years, with roads and railways deliberately targeted and the land unavailable for use (and still landmined, in many places). The war for independence from Portugal began in 1961 and ended in 1974, with independence declared on November 11, 1975. Immediately Angola descended into a civil war, a war that lasted twenty-seven more years, until 2002, with control of the country’s oil wealth as the prize.

Now, ten years into a tense peace, Angola is the second largest oil producer in Africa, after Nigeria. Fueled by oil revenues and effectively under one-party rule, jammed in the big city and depopulated in the countryside, the fifth largest country (in area) in sub-Saharan Africa is necessarily building a new infrastructure.

Angola today is a construction bonanza. Chinese, Portuguese, Brazilian, and a host of other nations’ companies are building roads, railways, bridges, dams, airports, hospitals, ministry buildings, skyscrapers, condos, you name it -- and it all has to be done at the same time, in all eighteen provinces. There were forty-four major international construction companies at work in Angola in 2011. Angola trades oil for construction to China, and is one of the African countries that will receive some $20 billion in construction loans that China announced in July -- money that will hire Chinese construction companies who will, in effect, build an African infrastructure for extractive industries that Chinese companies can then enjoy the benefits of, and will provide a source of patronage and cash for the present generation of African elites to spend and a future generation to repay. On the eve of the August 31 Angolan election, a Financial Times reporter noted that “some, especially those with connections to the presidential palace, are certainly enjoying the fruits of peace.”

Here’s what you’d see from the window of your SUV, driving around at night in Luanda: 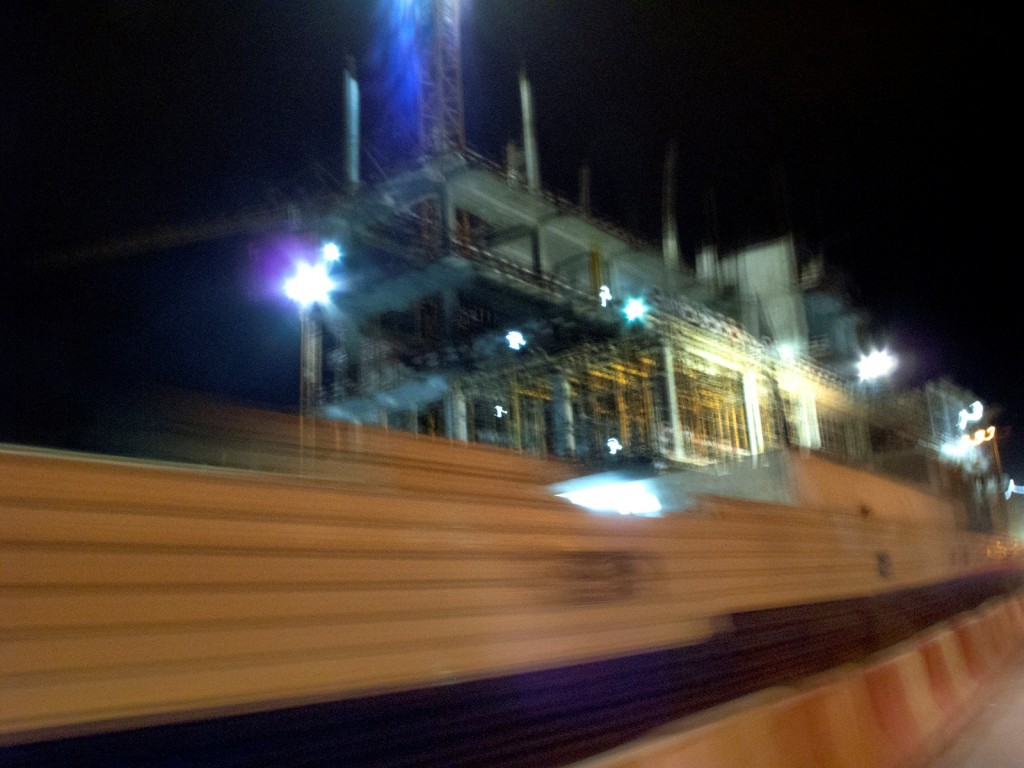 Greater Luanda is well on its way to becoming a megacity, with maybe as many as eight million people. (There was a census in 1970, and another one is scheduled for next year). Many of them live in the musseques – the unpaved neighborhoods, a Kimbundu word that means “sandy place.” They're informally organized, without running water. When those millions of poor get their grind on, they kick up a lot of sand. That adds a crunchy taste to the eructations of hundreds of thousands of private automobiles that choke the city’s asphalt streets, not a few of which belch black smoke. Add to that more clouds of dust as old buildings come down and new ones go up, and I mean they’re going up everywhere. During the dry season, a dirty dustcloud envelops the city for miles, as I found out when I flew up through it and we finally broke through to pristine blue.

It’s hard to photograph a “good sky” in Luanda. This picture was taken early in on the morning of July 25, 2012, trying to capture the sky. See those high-rise cranes on the horizon? That’s just a little bit of the city’s wraparound construction panorama. 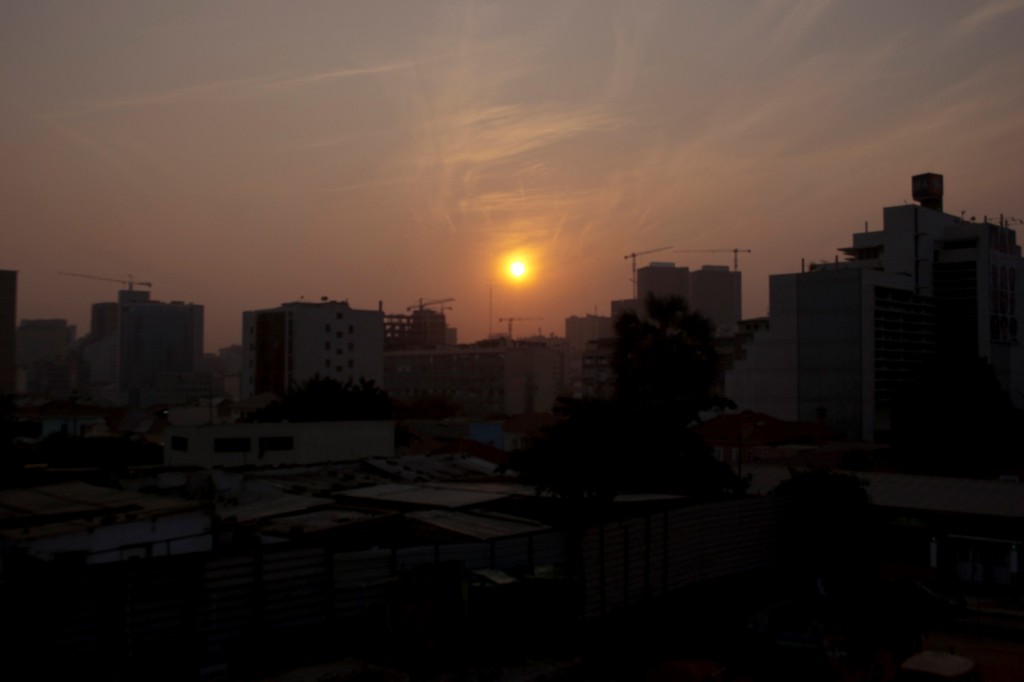 Of course, how you expose a picture makes a lot of difference. This frame was taken a minute or so after the one above, with a shutter speed of 1/80 instead of 1/800: 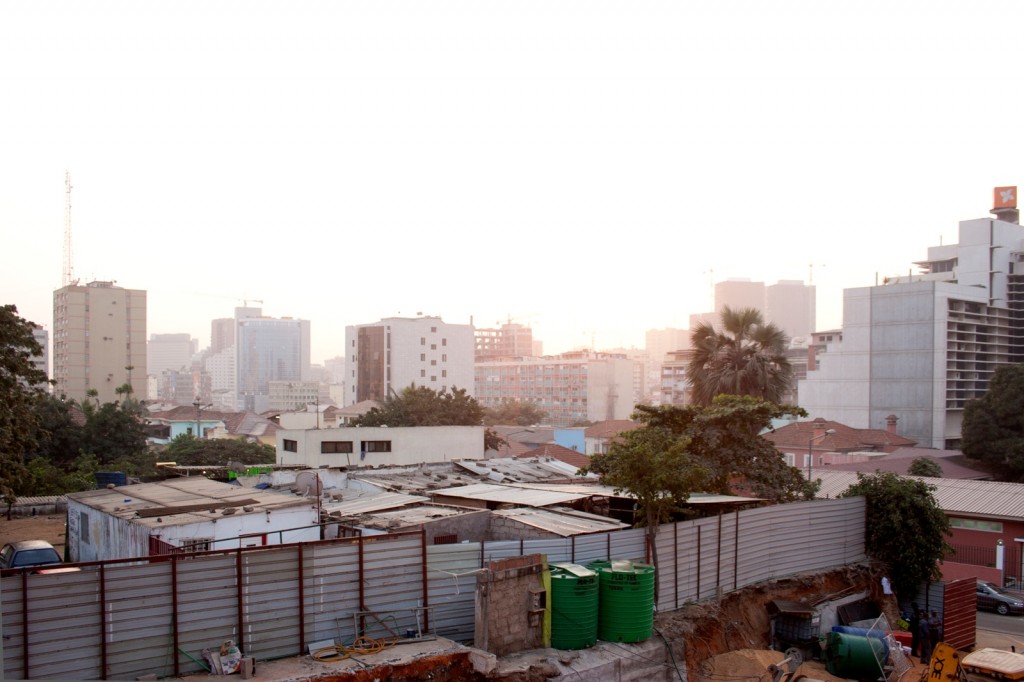 Let’s look at a couple of details in this picture. Here’s something I saw everywhere I went in Angola, something you can see all over the world, in what Mike Davis called the Planet of Slums -- corrugated roofs held steady by the weight of rocks and blocks: 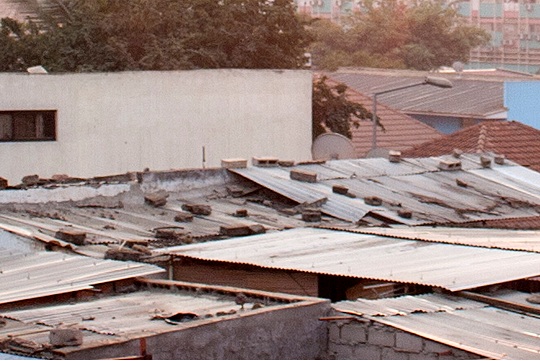 . . . and, down in the lower right-hand corner of the picture, the work day’s gearing up: 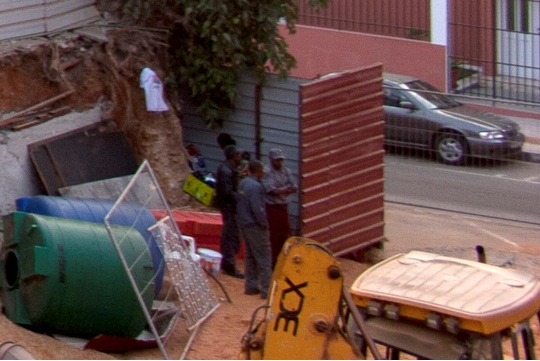 They were building what promised to be a tall structure next door to my guesthouse, right on the other side of my room. My side of the guesthouse looked out over the “bathtub” of a future basement two stories deep, excavated before I got to town. The pounding started early in the morning as they drilled huge holes in the ground and filled them with concrete and rocks. On occasion they went past midnight. There was also construction going on across the street.

That’s the sound of Angola today, wherever you go. Construction. While people hold their roofs steady with rocks. Will the poor ever have paved streets and basic sanitation? 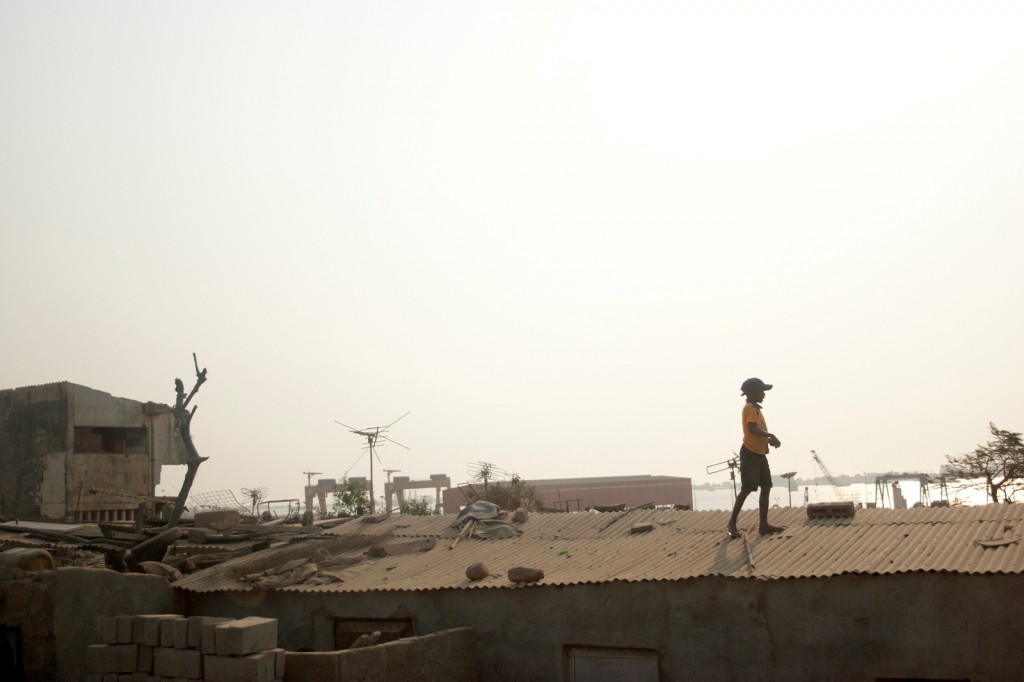 Our video performance today is by the construction crew, whom I consider to have consented to be photographed when they started making the wall of my bedroom shake.