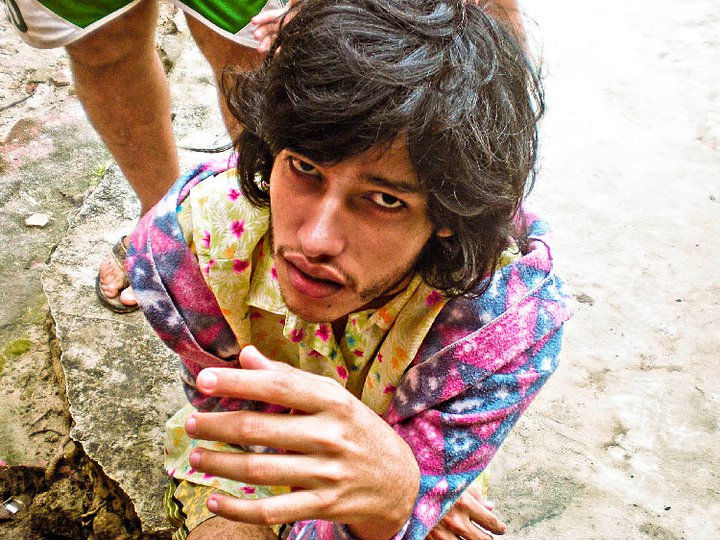 Videos July 30, 2014
Tecno Brega: A Video Primer
Tecno brega is one of the liveliest music scenes covered in our recent program "The Mighty Amazon" and it’s not just because of the music. Drop by some of the biggest aparalhagens (sound systems) that play weekly throughout the state of Para and you will not just be hit by a wall of speakers bumping the latest in 170bpm synth-pop, but with a bombardment of visual stimulation as well. Some of tecno brega’s biggest names (and some outside the scene) have also taken to giving the infectious, electro-kitsch coming straight outta the Amazon the video treatment. And the results have been stimulating to say the least. We’ve singled out a few of our favorites below and dropped some of that Hip Deep -Afropop Worldwide knowledge to go with it.

Gaby Amarantos – "Xirley"  http://www.youtube.com/watch?v=niGt6fhwMtA "Xirley" tells the story of a tecno brega performer rising to fame in a rags-to-riches story. To Portuguese language professor Marcio Bahia, this video accompaniment is a commentary on the power of technology in the tecno brega scene. As Bahia explains:

"The discursive sophistication of the video is incredible. As Xirley becomes a famous singer, she meets a guy that gives her a kind of necklace. And when she puts on this necklace there are lots of file names come of it…executable archives like ".exe" ".jpg"…etc. So there is that symbolic moment where the artist is saying, 'Look, I know the wealth of this industry comes out of technology.' So the necklace is not only a symbol of wealth but also includes all those digital files. So it's interesting how technology is very, very important in this ongoing process of cultural legitimization for the tecno brega scene.”

Gang do Eletro – "Velocidade do Eletro" https://www.youtube.com/watch?v=AGTZ5CBBLso Gang do Eletro is a three-piece from the beating heart of tecno brega: Belém.  Titled “Treme” (Shake),  the song is named after a well-known dance at the aparalhagens–the sound system parties that bring tecno brega to the people on a weekly basis.

Tecno brega is very much a product of poorer, working-class communities in Belém, and Gang do Eletro makes sure to include them throughout the video as they rock their moves through throngs of street vendors. Watch them work their moves even more in the video for the track “Galera da Laje.” Banda Uó – "Shake de Amor" Banda Uó hails far from Belém, but they regularly utilize tecno brega’s knack for synth-heavy pop an hedavy doses of drama. Based around the story of a model who Mick Jagger impregnated during a tour in Brazil, the song features a revenging woman and Banda Uó’s colorful and kitschy aesthetic, taking brega’s knack for filtering global pop to a new level. Be sure to also check out the video for their song “Catraca.”

https://www.youtube.com/watch?v=Wdq6HolksRY Like Banda Uó, João Brasil doesn't hail from Belém, but he still found its sound and aesthetic undeniably captivating  all the way in São Paulo. Featuring the former Bonde do Rolê singer Marina Gasolina, the video is a collage of everything from a television performance of Asian children playing a xylophone to American news clips. The combination of various visuals from seemingly unrelated locations is in many ways a defining aesthetic characteristic of tecno brega. Musically omnivorous, the style has sampled and repurposed material everywhere from the Caribbean to Dire Straits.

https://www.youtube.com/watch?v=wMJKIJPnMqA The young producer and tecno brega artist from Pará is an example of the possible sounds and styles on the horizon for the unique electro-Brazilian sound. Jaloo’s music (and visuals) are not your typical tecno brega. Yet the young artist clearly keeps an eye out on what is going outside of Brazil–which is very much a tecno brega practice. Listen closely, and you'll hear echoes of a famous former Disney star in the track. Be sure to check out his collaboration with funk carioca MC Deize Tigrona and the wild, cartoon-y visuals of their video for “Prostituto.” BONUS!

The Strokes – “One Way Trigger”

https://www.youtube.com/watch?v=reifFcUoTKw As we mentioned in the tecno brega section of the "Amazon" program, the once-obscure style of synthy-kitsch Amazonian pop has made its way beyond the borders of Brazil. “One Way Trigger” is one audio example of tecno brega’s vibe popping up in unexpected places. The video for the track was fittingly shot in Brazil by Fabrizio Moretti, the drummer for the Strokes. The look doesn’t really jibe with tecno brega’s aesthetic but we thought it was weird enough to at least note.
Share this page on
Twitter
,
Facebook
, or
email
.