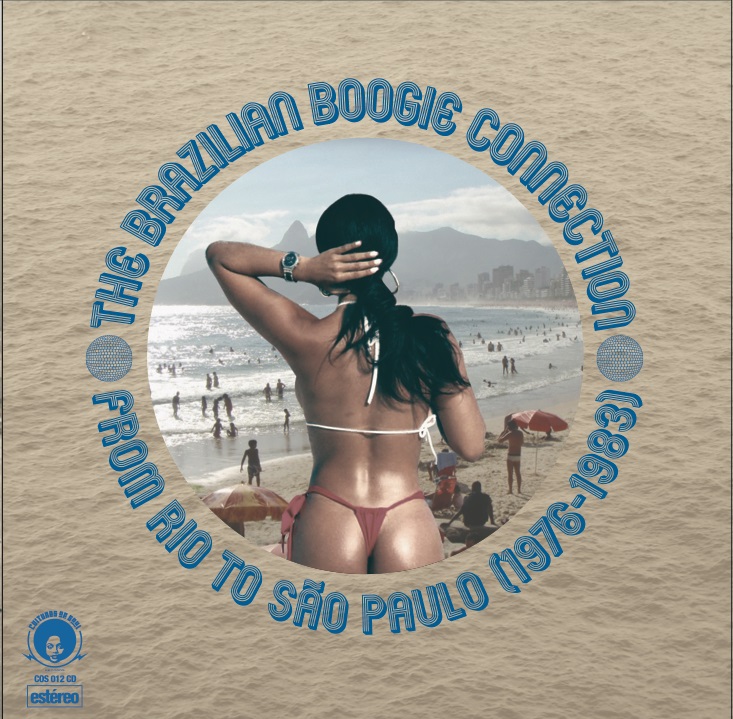 The disco takeover of worldwide pop culture was massive--so massive that it was once perfectly acceptable to wear bell bottoms and platform shoes in public. Today, the genre is rarely given its due for cultural importance and lasting influence. Disco didn’t have the political edginess of ‘60s psychedelia or ‘70s punk rock, but while both of those genres were dominated by white people, disco culture was much more diverse. Blacks, Latinos, gays--groups often excluded from mainstream musical visibility--all played significant roles in disco innovations and formed a large part of its audience. Given this context, disco was far more than vacuous dance music. And it was also a whole lot of fun.

Disco was a worldwide sensation, so Brazil is not unique in that respect, but its scene was particularly vibrant and stacked with talent. Brazilian Boogie Connection, released by Cultures of Soul Records, collects 13 tracks from Brazil’s disco and boogie (AKA post-disco or electro-funk) explosion between 1976 and 1983. Though for years Western record labels and DJs have eschewed Brazilian disco for bossa nova, samba and tropicália, there has recently been a surge of interest in this genre and time period. It's never a bad thing to hear more Brazilian disco, though it would be nice if all the recent compilations weren’t so similarly titled. Last summer, Wax Poetics released a stellar 80-minute mix of disco and boogie called Lincoln Olivetti: Brazilian Boogie Boss. Then in November, Favorite Records put out Brazilian Disco Boogie Sounds. Adding to the confusion, four tracks on Brazilian Boogie Connection are also represented on Brazilian Boogie Boss, two tracks overlap from Boss to Disco Boogie, and one song, Painel de Controle’s “Relax,” appears on all three.

In spite of this slight redundancy, Brazilian Boogie Connection is a thoroughly entertaining listen. It begins with two tracks by Marcos Valle, who adopted the disco sound after two fruitful decades performing bossa nova and samba. Valle is backed on the first track, “A Paraíba Não é Chicago” (“Paradise Is Not Chicago”), by the band Chicago. This group, which released a string of immensely successful records of gloriously cheesy, maudlin soft rock ballads, put in admirable work on the song, backing up Valle’s light groove and soothing singing. This collaboration took place in Los Angeles, and, though the American disco influence is apparent, the song features a unique interplay between Chicago’s horn section and veteran Brazilian accordionist Sivuca. Valle’s second track on the compilation, “Estrelar,” was co-written by Leon Ware, the producer of Marvin Gaye’s disco-soul classic, I Want You. The Motown connection makes a bit more sense than the Chicago collaboration, but both tracks are exquisitely fresh and catchy.

In general, Brazilian Boogie is well curated by DJs Greg Caz and Deano Sounds, though a couple tracks, like Tarântulas’ faithful Portuguese-language cover of “Don’t Stop ‘Til You Get Enough,” could have been sacrificed for more original material. The two most famous singers on the compilation, Tim Maia and Jorge Ben, are better known for their work in other genres--funk and samba respectively. But both transition smoothly into disco and provide some of the best tracks on Boogie. Maia’s booming voice sounds warm and soulful over the dreamy synth groove of“Não Vá.” The track reinforces the quirky charm of Maia, who dabbled in small-time crime, mind-altering drugs and cult membership, while delivering some of the most supremely funky tracks ever laid on wax. Ben’s cut, “Rio Babilônia,” is more loosely disco-tinged, with only some tasteful synth playing distinguishing it from the rest of his brilliant samba-soul oeuvre.

Closing out Boogie Connection is Robson Jorge and Lincoln Olivetti's "Aleluia," a disco-gospel track that's perhaps the most beautiful song on the album. The Wax Poetics mix was entirely dedicated to Olivetti’s prolific and outstanding career as producer, keyboard player, arranger and songwriter. He and Jorge were a bit like the Brazilian Sly & Robbie, integral behind-the-scenes players on much of the classic MPB (música popular brasileira) from the ‘70s and ‘80s, including several tracks on this compilation.

Boogie Connection is the kind of compilation that you can safely put on in most situations, be it on the dance floor or in more intimate circumstances. It would be challenging to listen to it without a smile on your face.