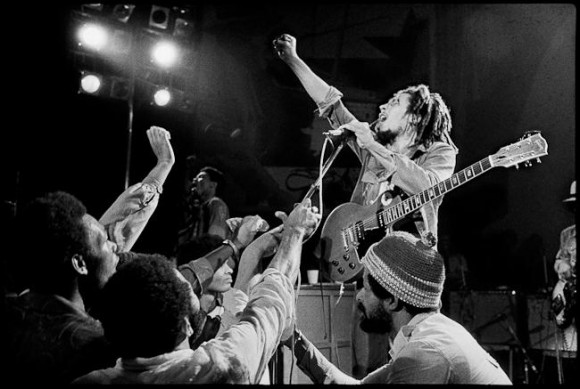 Today is the 70th anniversary of Bob Marley's birth and, without a doubt, this will not be the only tribute to this fact that you will see. And that's for a good reason--Marley looms as large in our popular culture as he ever did, his music maintaining its hold on generations of listeners, while his face, shining beatifically, adorns everything from dorm-room posters and lighters to Kuerig K-Cups. Legend, his epochal greatest-hits collection, even briefly hit number one on the charts in 2014 as the result of an iTunes sale. Given all of this, it can sometimes be hard not to feel at least a little cynical about Marley's place in American popular culture, where, as The Onion describes, he is cast as the liberator of frat boys from suburban oppression.

Bob Marley, however, mattered to listeners far beyond the United States. In fact, he's been described as the first, and greatest, "Third World Superstar," a musical figure who rose from poverty and hardship to sing about these injustices. Marley's immense international success was proof that the system was not inviolable, and the reach of his voice and his message resonated with listeners who saw themselves in them. Marley may be beloved in the U.S., but his true importance as an international figure doesn't have all that much to do with American perceptions.

So in honor of Marley's 70th birthday, we've decided to collect some of the greatest music that he inspired from around the world. And yes--all of it is better than Clapton's version of "I Shot the Sheriff."

Few, if any, Ethiopian stars can compete with the wildly popular Teddy Afro. While not a Rastafarian or a reggae singer per se, Teddy has definitely absorbed Marley's political example, and frequently sings out against the corruption and political failure that he sees in his nation. As a result, many of his songs are banned from the airwaves by the government, a fact that has done nothing to hurt his consistent popularity.

The legendary "Lion of Zimbawe" has always been vocal about his love and respect for the man he called "Brother Bob," a respect that was highlighted on his turn towards reggae in the mid-1980s. This track ties the beat of reggae to the underlying pulse of Mapfumo's chimurenga music, employing the fusion to make a powerful political statement.

Gilberto Gil is yet another star who fell deep under the spell of Marley. While the Brazilian musician had become a legend in his native country for his innovative blend of funk, samba and pop, he devoted an entire album to Marley covers. This is a particularly gorgeous rendition of "Time Will Tell," splicing the original with flute and accordion.

Bob Maghrib: "So Much Trouble in the World"

We end our list with this song by Bob Maghrib, a Moroccan group that applies the beat and politics of Marley's music to the fraught conditions of post-Arab Spring North Africa. They are part of a growing Gnawa reggae movement which is flourishing despite the seemingly unlikely geography, proof positive that Marley's music maintains its ability to inspire.