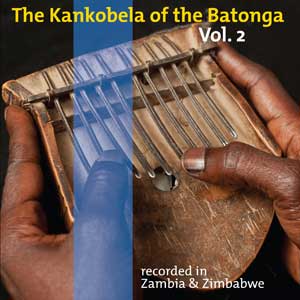 This volume of 16 spare, beguiling solo performances on the kankobela thumb piano completes a pair of CDs that are indispensible for collectors of Africa’s mysteriously melodious indigenous traditions.  As I wrote when reviewing Volume 1 of the set, this is a disappearing music whose few remaining practitioners are old, idiosyncratic, storied, and physically divided between southern Zambia and northern Zimbabwe by Lake Kariba.  That lake used to be the meandering Zambezi  River, until Rhodesians dammed it in 1958, wiping out Tonga homelands and separating survivors both geographically and politically.

These two CDs are assembled from field recordings of 18 musicians, made in both countries by Michael Baird in 1996 and 2008.  Baird is the compiler of the remarkable 22-volume Sharp Wood CD collection of Hugh Tracey’s iconic field recordings.  With his own productions of indigenous music in Zambia and Zimbabwe, Baird proves himself a solid practitioner of musical preservation, not just a disseminator.  His extensive notes on the history, personalities, rhythms, modes and other musical qualities in these kankobela performances deepen the experience significantly.

So what do we find on Volume 2?  More old voices—some soft as whispers, some craggy and rough—complex and subtle rhythms, often so stretched and abstracted that it is hard to be sure where the pulse is, and then the otherworldly tonalities of the wood-and-iron instrument itself—like dripping water one moment, and explosions within the earth the next.  Leonard Mweembe Siapwayuma (Zingozo, Zimbabwe) sings about facing death in a high lonesome voice that sails over a tumble of buzz and chime. Aaron Simajele (Siamajele, Zambia) infuses playful delight in a song about hunger.  Baird notes that this old guy has four wives—hungry but happy.  Spend time with these recordings and recognizable characters emerge track after track.

Nyeleti Mukkuli (Binga, Zimbabwe) has a song comparing a girl to a rooster, and its ambling, fuzz-tone music comes perhaps closest to the swirling, melodious sound of Shona mbira music from Zimbabwe.  It is remarkable to consider that while Shona music travels the world, attracting new students and fans every day, and nurturing the tradition back home in the process, the kankobela of the Batonga is literally vanishing before our eyes.  The reasons are complex.  This music has not benefited from champions like Paul Berliner (author of The Soul of Mbira) or Dumisani Maraire (who brought Shona music to the Pacific Northwest in 1968), let alone Thomas Mapfumo (who made Shona mbira part of the global pop canon).  More fundamentally, the Tonga traditions, for whatever reasons, are not being embraced by young players, and without that, no amount of nurturing will suffice.  Luckily, the strange and otherworldly music of the kankobela has a champion in Michael Baird.  Even if the music disappears as a living tradition, it will not be forgotten.

You can purchase this and other Sharp Wood releases at http://www.swp-records.com, also through amazon.co.uk.