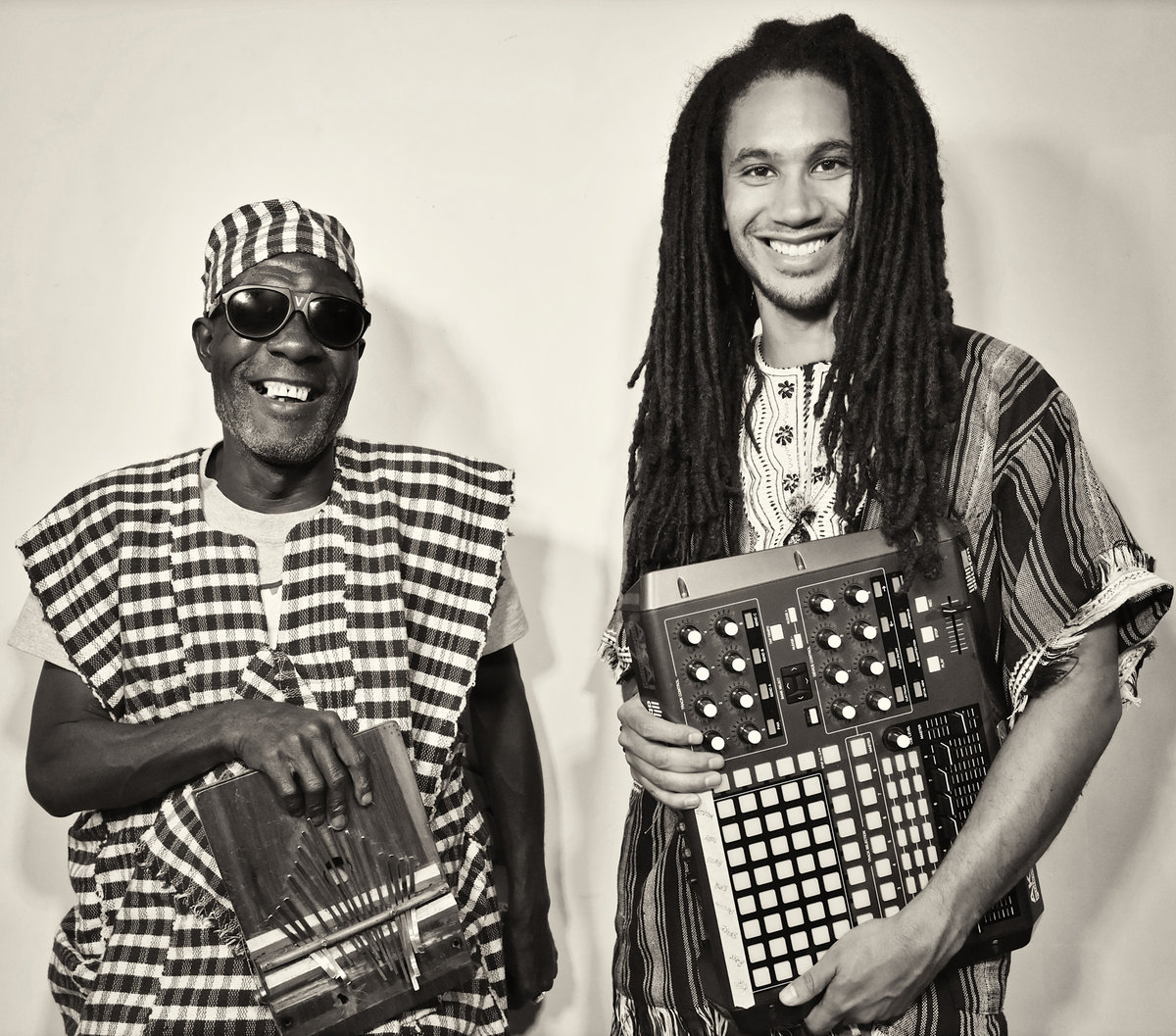 Blog May 25, 2017
From Freetown to the World: Producer Chief Boima and the Kondi Band

The Kondi Band is a multigenerational, cross-cultural collaboration that started with a bootleg remix. Five years ago, a young DJ/producer, Chief Boima (Dutty Artz/INTL BLK), saw a video on YouTube by an elderly, blind Sierra Leonean musician, Sorie Kondi, entitled “Without Money, No Family,” produced with recordist Luke Wasserman. “I saw it and loved it.” Boima told me when we spoke in February 2017. “I was initially drawn to it in terms of the social commentary of it, and the virtuosity of his playing, and really pride in it being something uniquely Sierra Leonean.”

Boima, born in in the U.S., has family roots in Sierra Leone. At the time of his remix, Sorie was a well-known kondi player and singer in Freetown, but at the time of this writing, largely thanks to the work of Chief Boima, Sorie Kondi’s music can be heard in global music hipster DJ sets across Europe, the U.S. and beyond. Originally, Boima remixed the song, “just to have something to play,” but then The Fader picked it up and it traveled fast, creating waves of interest in Sorie Kondi’s music abroad. “It circulated around, and then like three years later Luke Wasserman wrote me an email and asked me if I was interested in working with Sorie. We worked together to get him to do a tour of the East Coast in 2012. He spent a month at my house and that's when we started the Kondi Band.”

The debut Kondi Band LP, Salone, comes out on June 2 via Strut Records and the INTL BLK platform. It’s a subtle, peaceful record, hypnotic and relaxed, centered around Sorie’s instrument, which often sounds like sweet summer rain, and his voice, aged and textured, like well-worn leather. Boima’s electronic production elements are obvious, but they are well integrated in a way that feels respectful, even deferential, to the master’s musical vision. The album includes previously unheard collaborations, compositions previously heard in other forms on the group’s debut EP Belle Wahallah and the retrospective mixtape of Sorie's career,The Freetown Tapes 2006-2016, and new remixes, including productions from Will LV and Matt Shadetek.

When I interviewed Chief Boima for the Afropop audio documentary, "Reissued: African Vinyl in the 21st Century," we also spoke extensively about the Sorie Kondi project, specifically how it relates to the market for African music outside the continent. Here are some excepts from our conversation:

Morgan Greenstreet: Is there an audience in Sierra Leone for the music you guys are making?

Chief Boima: Well, Sorie Kondi is known in Sierra Leone as somebody who does “cultural music.” There is a differentiation in Sierra Leone for types of music: You have older music, which also includes the type of the ‘70s music that's being reissued by labels in the North, people know that music; And then there's “cultural music,” which is related to the provinces and to the indigenous languages and ethnic groups in the country; And then you have, obviously, the more Afro-pop, that includes hip-hop and dancehall and these kind of things. So I do think that people are very much aware that Sorie keeps getting on a plane and going to Europe…I think the industry works differently in the concept there than I think most people have in the North: there's not a lot of money circulating, you know, that's why Sorie Kondi wants to travel and get out of Sierra Leone and try to bring money back, because there's not a middle-class that's supporting a kind of localized music industry in the same way that it exists in the global North. But…in Sierra Leone I think that he is just well known in general, and he’s just part of the local cultural milieu.

So, who is the audience for the Kondi Band?

Actually, I found an audience, interestingly enough, in this [vinyl] digger culture, because some of the labels like Strut and Soundway are now getting into new artist development and releasing new artists. Soundway really kind of led the charge of that, and they’ve really gone deep into finding people doing new African sounds, or new global sounds across the world. And Strut now, with the project that I'm working on, is also doing that. So I feel like the infrastructure of the diggers audience has allowed me to enter a market that's not totally dependent on the pop sphere, which I appreciate.

That’s really interesting. How does the music of the Kondi Band fit the tastes of the DJ/vinyl digger culture, which is usually focused on retro sounds?

I think musically it appeals to the diggers, I guess? I can't really say. I hope that…The full album’s not out yet, so ask me in six months how it went [Laughs].

With African music, it’s not only reissued music that people are interested it, it’s not only old stuff—stuff that’s kind of lesser-known also gets attention, and I think Sorie Kondi is really somebody who's this talent, this virtuosic talent that was kind of unknown. And my relationship with him, bringing him out of…helping expose him to a wider audience, fits within this same reissue-type story, even though he's a contemporary artist. And what I really wanted to do was to bridge my own work in contemporary African pop with his story, to create this project that is very contemporary. The music, for me, sonically fits alongside any kind of Afro-pop that's coming out today, because of my production techniques and because of my aesthetic influences, but at the same time it fits the narrative of a lot of what the reissue culture is interested in. So therefore it's gotten attention in that world, which I think is actually kind of like a subconscious strategy that I just kind of lucked into, but now I’m definitely rolling with.

The positive thing about the developments in reissue culture is that it's created an alternative industry to the sugary drink kind of sponsored industry where people are buying records and able to sustain what I would call working class musicians' careers, and get into touring circuits. The reissue culture, or vinyl culture, for me, is the one thing that sustains that, and I hope that it sticks around at least until we can figure out how to give value back to music and take it away from the tech companies.

I think that [this industry] has the potential to also help push traditional music, which you know it doesn't always get the kind of budgets that maybe you know Wiz Kid or Tiwa Savage are getting, attracting interest from major labels. You know Sorie Kondi is never going to get that kind of attention, but maybe he can in this other industry that exists, this more independent record reissue industry, can support [him] and [he can] also interact with fans that are more interested in cutting-edge sounds.

I definitely see what you’re saying, in terms of the production style and also the kind of “rareness” idea. It’s a very unique story, Sorie Kondi is very unique musician who’s also struggled and now might have an opportunity to reach a broader audience, which is a recurring theme in the reissue scene. But I’m wondering, specifically for the music you guys are doing together, how will people receive the Kondi Band record in Sierra Leone?

In Sierra Leone…I mean…I don't know if people in Freetown will really associate this as being something new that Sorie Kondi is doing, I don't imagine that they will because, as a Sierra Leonian, I just see it as a natural step in the evolution, because Sorie Kondi himself, on this latest album, his producer Fadi Konte is sampling P Square beats. He’s very much, they’re all very much aware that they are part of this kind of global music conversation. I think it's people on the outside that look at it and try to separate it too much, you know. In Sierra Leone, you have these major categories, like “cultural music,” but that doesn't mean cultural music people aren't wanting to be popular. One of the biggest artists of recent times is Bobby Fala, he sings Mende traditional guitar music, but he's got one song that sampled the “Murder She Wrote” [reggae] riddim, and it's the biggest hit of a couple years ago in Sierra Leone, and that's traditional music from the southern part of the country. So yeah, back home, I wouldn't make that distinction. I think that Sorie Kondi is well known and they know that he's getting attention outside and I think that's the most significant thing. I hope that, if anything, it will valorize, at home, more of our local traditions and our more local contributions to the global conversation, instead of trying to mimic the United States or mimic Nigeria or Ghana. We have our own kind of contributions, and I think it's meaningful that I am of Sierra Leonean descent, trying to do these things in conversation with my own culture, with my own people.

So I’m wondering, do you think it changes the power dynamics of the industry, and do you think it’s important to have people of African descent involved in this industry?

One hundred percent yes, but with caveats. I think that in any kind of situation you can have a power imbalance, social issues, you know. Obviously I am born and raised in America, I am of mixed race, back home in Sierra Leone, my family comes from a different class than Sorie Kondi, and so there are definite things to watch out for. But in terms of global power dynamics I think that it is important that people who are from the cultures and the countries that are being represented are involved in the process, because it is an issue for representation and it is an issue for empowerment. Because myself, I'm always going to invest back into Africans, the African diaspora and specifically Sierra Leone every chance I can. For somebody who's not invested in Sierra Leone, they can just do one thing and then they're going to move on to the next country, because it's more of a market decision; for me it's more based on empowerment. That is something that's really important to me as an artist, and it’s the reason why I became an artist in the first place, you know, it’s the reason why I chose this profession, because I saw a place that I could really be effective in pushing back against the old ways of doing things.

I'm a trained, I guess you can say “international development specialist,” I went to school and studied and I did the internships at the U.N., I've done different things. I felt really disillusioned by the kind of international politics and the game of international development and felt like that that I was able to make more of an immediate impact in the cultural sphere. I also write for a website called Africa Is A Country, I am the managing editor. I feel like the culture and the media sphere is a place that I'm able to kind of push back against the status quo a little more. Then eventually, if I'm successful in that sphere, I can go back to other forms of engagement, and hopefully, whether it's politics or aid or development, also get involved there. But for now, I felt like the place that I could really do something in terms of empowerment for Africans in the general sense, you know, whether it's in Brazil, or the United States, or in West Africa or Southern Africa, or wherever, was to participate in the cultural sphere, and I happen to be a musician [laughs].”