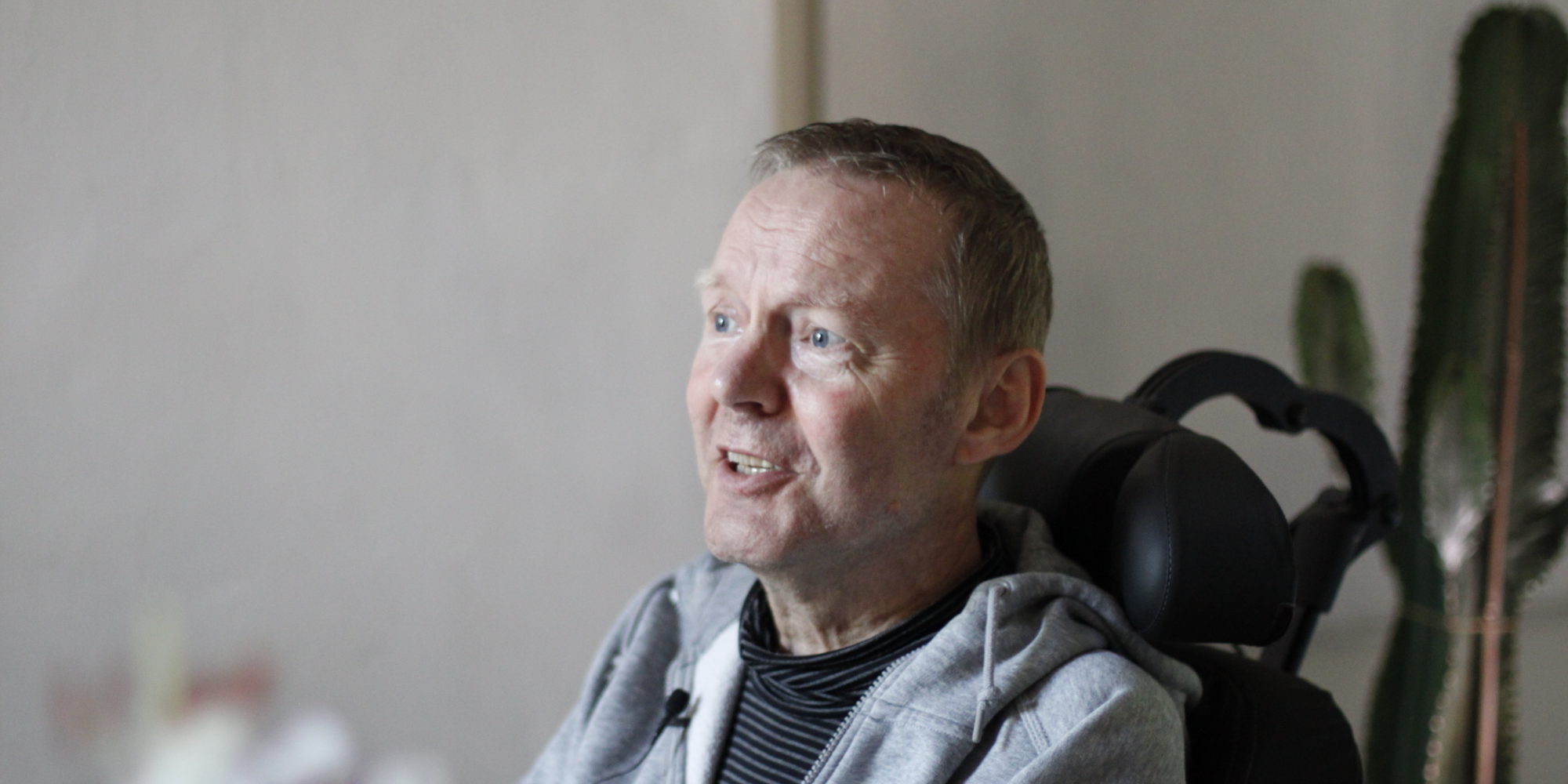 British music producer Andrew “Madebe” Burchell passed away in November 2017 at age 65 from complications related to motor neuron disease, but he left an indelible mark on Kenyan popular music. Burchell lived and worked in Mombasa, Kenya from 1992 to 2007, when he was forced to return home to Birmingham for medical care. He is best known for his work with two female singers who each offered a new spin on Swahili taarab music—Malkia Rukia (Rukia Abdulrahman), who tragically died in 2001 at the height of her fame, and Nyota Ndogo (Mwanaisha Abdalla).

But Burchell's impact on music in Kenya extended far beyond his work with these artists. During his years in Mombasa, he mentored dozens of artists and producers, including some who would eventually become his competitors in a local music industry that could hardly be said to have existed when he first arrived.

This post is the first of two on Burchell’s life and work in Kenya. Each of us had an opportunity to interview Burchell at length—Andrew Eisenberg in 2005, for research on youth music in Mombasa; and Bill Odidi in 2015, for Ketebul Music’s Shades of Benga. We find his story worth telling, if only because it is unlike what one might expect of a producer from the global North who came to be an important player in an African music scene. He arrived in Kenya with no contacts, modest funds, and limited physical mobility, and managed to build a music production business from the ground up. Although he did not see his work as charity or “development,” financial gain was never his first priority. He was content to be a significant creative player in a dynamic music scene—even if he had to invest an inordinate amount of effort in helping to build that scene first.

Born in South London in 1952, Burchell spent his early teens listening to the radio and poring over magazines and books. After moving to Birmingham in the early 1970s, he got involved in music through different channels: he wrote album reviews for local publications, played in a few bands as a clarinetist and a singer, and established a small recording studio. He traveled a bit, including to the U.S. and Mexico. But it wasn’t until he visited East Africa that he found the impetus to settle into a new land and try to make a go of things.

Burchell’s first visit to East Africa came about by chance. “Maisha ni bahati sana” (life is very much about luck), he would say in Swahili whenever he recounted the story. It all started on a “drunken Christmas” in the late 1980s, when a few of his friends who were involved in teaching English in African countries had converged back in Birmingham. One of these friends offered Burchell the mailing address of a Ugandan student who was hoping to exchange letters with a speaker of the Queen’s English. Burchell accepted, and soon found himself with an invitation to visit Uganda.

Burchell would often say, half jokingly, that he felt immediately at home in Uganda because nearly everyone he interacted with spoke surprisingly good English. Ironically, he would eventually set up shop in the only urbanized part of region where a language other than English is essential for making friends and doing business. What drew Burchell to the Swahili coast was a desire to engage with music that was distinctly, authentically local—music that didn’t sound anything like what would be found on any mainstream radio station in Europe or America (or, increasingly, Africa). This desire was no doubt honed by the rise of so-called “world” musics in the 1980s and the discourses of authenticity that surrounded it. But according to Burchell, its seed was planted during his teenage years, by the underground and oddball local musicians put on air by John Peel on BBC’s legendary Radio 1.

Burchell first visited Kenya in 1990. By this time, he was actively seeking opportunities in music, though his knowledge of African music was limited to the big stars who had made it into global circulation. He was hoping that Nairobi would show him what a real local African music scene was like. What he found, instead, was a city that seemed to be enamored with foreign sounds, both western and Congolese. Nairobi did have at least one local music scene that certainly would have interested Burchell—the so-called “vernacular” popular music scene, centered on the genre known as benga—but he did not manage to encounter it during that trip.

Burchell’s visit to Mombasa was more fruitful. There he encountered the sounds of Swahili taarab, whose audible Indian and Arab influences fascinated him. He ultimately settled in Mombasa in 1992, establishing his first recording studio in a small kibanda (business stall) along the Mombasa-Malindi highway.

From his first days in Mombasa, Burchell lived among the city’s middle-class Africans, Arabs and Indians, rather than in a European expat neighborhood outside the city (which he would never have been able to afford, in any case). Naturally voluble, he quickly developed a facility with the Swahili language, the local lingua franca, though he maintained his own special way of speaking it, marked by an intensive mixture with English and a strong West Midlands accent. 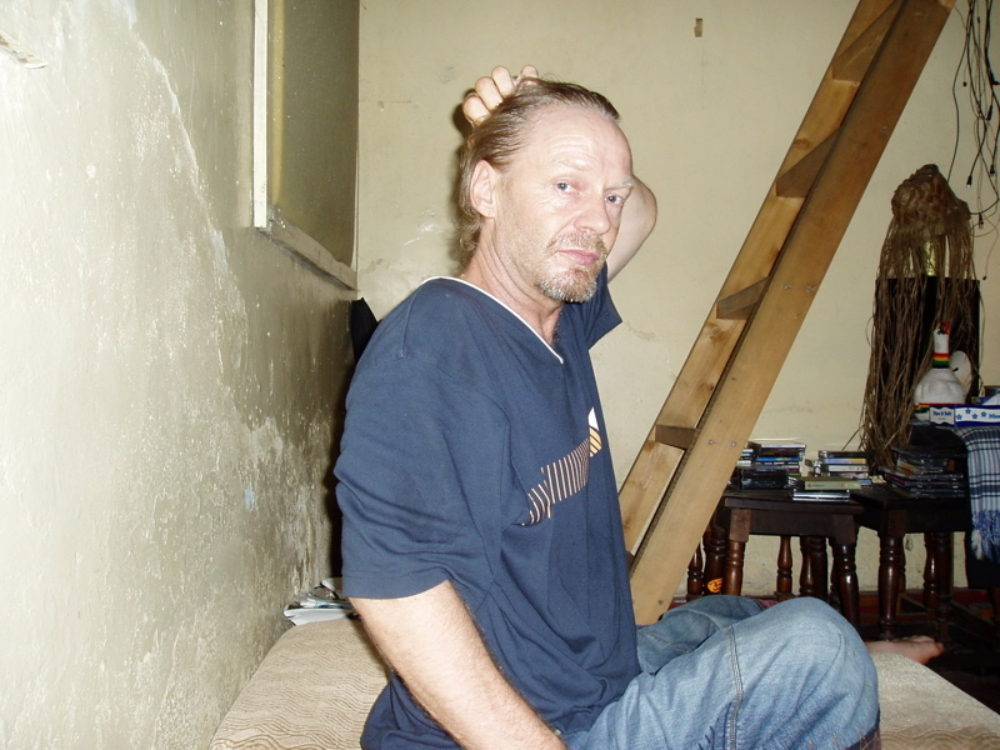 During his first year in Mombasa, Burchell acquired the Swahili nickname “Madebe,” which would stick with him throughout his entire career. Literally “tin cans,” madebe is commonly used in East Africa to mean “noise” or “noisiness.” In early 1990s Mombasa, it was also a slang term for music. According to Burchell, the name first came from young people who would see him wobbling along on his crutches and remark that he must have music in his head. But as time went on, many young artists who worked with the loquacious Burchell assumed it referred to his propensity for idle talk, since this was how their teachers in school would use the word. Burchell didn’t see his talk as idle, per se. But much of it was whimsical. He liked to laugh, and never took himself or anything else too seriously.

Burchell began his work in Mombasa with little more than a four-track cassette recorder, some serviceable microphones, and a digital sampler. The first groups he recorded were Christian choirs who were accustomed to recording every song in a single take, with no additional tracks or effects. Such clients, Burchell knew, would never sustain his music production business or creative interests. He needed clients who were looking to engage in more complex, multitrack recording projects. Such projects would situate Burchell as more than just an engineer, but as a “producer,” enabling him to charge more for his services or—perhaps even better, in Burchell’s eyes—take partial ownership of the recording, sharing any profits that may come.

All this was easier said than done in early 1990s Mombasa. The only active recording studios in the city at the time were the taarab studios in Old Town, which were recording to an analog cassette tape master, using few if any overdubs. Hip-hop and dancehall artists, who would eventually become important clients for Burchell, showed little promise for him in those early days. They were mostly using commercial recordings as their backing beats, overdubbing their voices live in the club; and it wasn’t clear that they had much of an audience. Burchell briefly thought he might find some success with local benga bands. He had finally gotten to know benga thanks to his first close friend in Mombasa, an ethnic Kamba man who happened to be a benga aficionado. While Mombasa was a peripheral location for benga, some of the local bands were quite good. Unfortunately, Burchell found them “very resistant to any experimentation.”

Virtually the only artist that Burchell found who was willing to experiment with multitrack recording was the late Congolese gospel singer Emachichi (Emmanuel Chibanda), who become one of Burchell’s closest friends in Mombasa and, for a brief time, a business associate (more on that in part two). (Emachichi passed away suddenly in 2006 from an undiagnosed respiratory ailment.)

Instead of calling it quits and moving on from Mombasa, Burchell made a decision that would profoundly affect the trajectory of popular music on the Kenyan coast: He worked to build the local recording industry by establishing himself as a knowledge base. He held informal recording clinics for aspiring hip-hop and dancehall artists, with the aim of getting them to think about how working in a recording studio might enable them to craft a more locally salient style.

In reality, Burchell’s own knowledge of digital recording techniques was quite limited in his early days in Mombasa, especially when compared to the likes of Bruce Odhiambo and Tedd Josiah in Nairobi, who were then working with digital audio workstation-based studios (Odhiambo’s being the first ProTools studio in Kenya, owned by the advertising firm where he worked). Instead of pretending knowledge he didn’t possess, Burchell sought information and advice from his counterparts in Nairobi, and took a collaborative learning approach with musicians and producers in Mombasa. By the early 2000s, he was often the one learning recording techniques from young musicians and producers in Mombasa who had gained facility in this or that new software application. He would reciprocate with the use of his studio and more general insights into the craft and business of music production.

One young adept who emerged as Burchell’s equal in some technical areas was Hassan Majid, who co-founded the hip-hop production house Tabasam Records in 2002. Burchell helped Majid set up his first project studio in the late 1990s. Within a few years, Majid had established himself as a competitor to Burchell in the realm of urban youth music production—a development that Burchell only ever described in positive terms, as evidence of a rising tide that would lift even his own boat.

In addition to his informal mentees, Burchell hired a few interns during his 15 years in Mombasa. Most were hip-hop artists with an interest in and aptitude for production. The first to come on board with Burchell in this capacity was K-Shot (Salim Gambo), who ended up in a tumultuous marriage with Nyota Ndogo that was the subject of many a gossip column during the time she worked with Burchell. The last was Amin “Elchie” Virani, whom Burchell hired as an engineer and fixer. Virani, who now runs his own small media company in Nairobi, had a background in radio and was starting to work in documentary film production when he came on board with Burchell. He was nevertheless quick to credit Burchell as his “mentor and father” after news broke of Burchell’s passing.