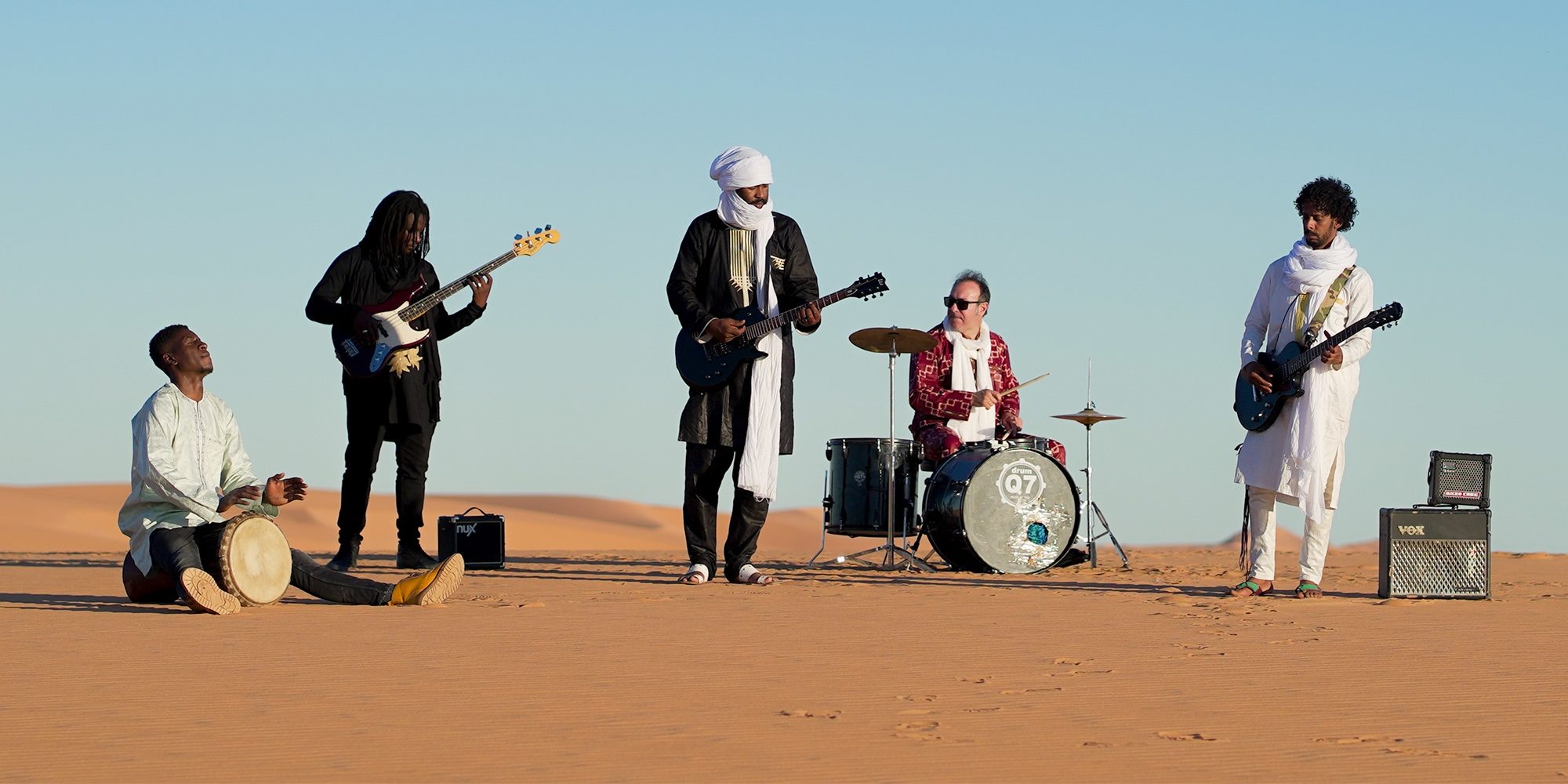 Ever since the Malian band Tinariwen burst onto the international scene two decades ago, Tuareg “desert rock” has become a widely known and beloved global genre. As it happens, many of these bands have names that start with T: Tinariwen, Tidawt, Terakaft, Tamicrest, and now a relatively new entry, Tikoubaouine from Algeria. I recently spoke with Said Ben Khira, one of the band’s principle singers and songwriters. I asked him what sets this band apart.

“We are different from the other Tuareg bands,” said Ben Khira. “It has to do with the way we evolved. We listened to Tinariwen and Terakaft when we were younger, but also we listened to music from other cultures, sub-Saharan African and also Western music, so you can find those influences in our sound. The feeling is different. It's diverse, but it has the Tuareg core. We are all about the melody, which is a little bit different than traditional songs.”

This is evident on the band’s 2016 debut album, Dirhan, and perhaps even more so on 2020’s Ahaney. (A third studio album is recorded and soon to be released, hopefully to accompany a coming U.S. tour: stay tuned on that.) Take the song from Ahaney “Aksanagh Tarha,” which has a sound that singer/guitarist Bombino of Niger dubbed “Tuareggae.” Perhaps closer to Bombino than to Tinariwen, Tikoubaouine’s music does have a pop tilt, with more melodic and familiar song forms, touches of rock, funk and reggae. And Ben Khira is right about those melodies. These are songs you come away humming.

Some, like “Aytma” and “Ana Sahroui,” start with chanting, a bow to tradition, then resolve into shapely, sometimes plaintive melodies, and seductive grooves. “Tarha” unfolds in a racing 4/4, while “Dounia Wassl” lopes along in a slow 12/8 propelled by hand-claps. “Amassakoul,” another cranker, includes French-language vocals. And throughout, warm and beautiful electric guitar lines sing and soar. 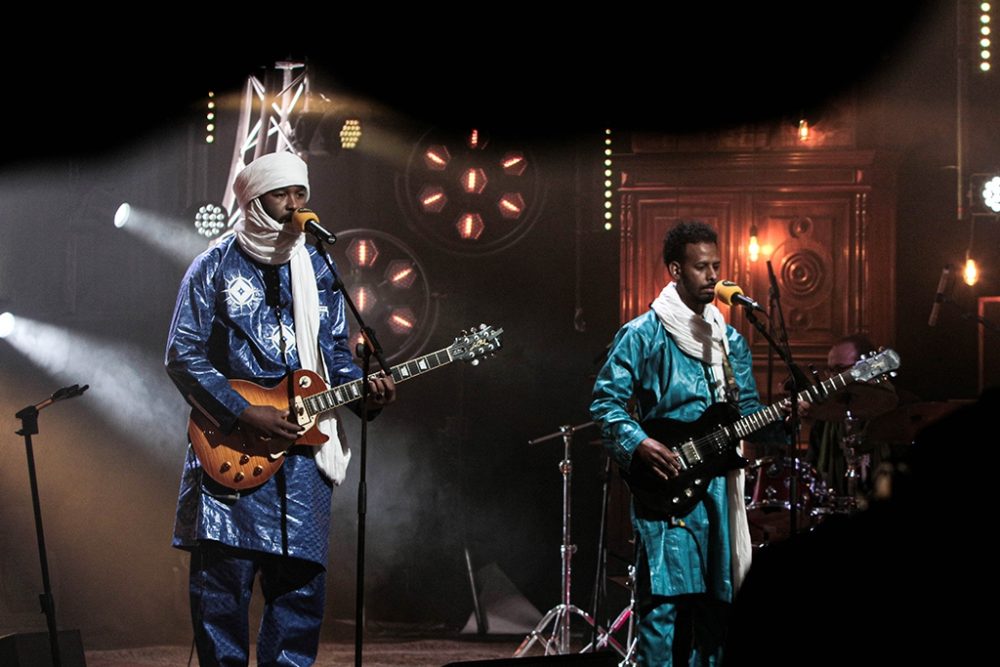 Ben Khira spoke to me from the Algerian desert, his words translated by the band’s manager Ali Merghoub in Cairo. And yet it was me, in urban Connecticut, who was having internet connection issues…

In any case, Ben Khira was able to tell me about the band’s beginnings. He started singing at nine years old, and his first instrument was the oud. A few years later, Tikoubaouine came together as a five-piece, with singer, composer and guitarist Hosseyn Daggar sharing center stage with Ben Khira. “We were fans of Tinariwen and Terakaft,” said Ben Khira. “We started the band in 2013 and we were covering local music, mostly by those two bands. Then as the band got more mature, we gigged a lot in the local area, in In Salah, Tamanrasset and Adrar, three cities in the south of Algeria. We started to have a local following and then we started composing, having inspirations from everyday life, the local life around us. We can only be grateful for the path that was built for us by Tinariwen. They showed us how we could reach the world. We feel like today there is no barrier between human cultures. This is why the message gets through. When we perform, we forget all the boundaries.”

Tikouba, the root of the band’s name, literally means “sword.” But Ben Khira says it has a double meaning: “It also refers to the design that you find at the top of a sand dune. The fact that we chose this name is because we believe that the sword is not always used for war. It can be used to bring peace.”

Ahaney opens with one of the band’s signature songs, “Tiniri,” meaning “desert.” Tuareg bands naturally sing about the desert, sometimes spelled tenere. The Sahara is the realm of these nomadic people and it profoundly colors their art. This song speaks about the challenges of living in such a vast, empty space. “It talks about life of someone in the remote desert, very far from the cities,” said Ben Khira. “It talks about the difficulties of finding water and food. We wanted to speak about this condition of life and how, even though Algeria is now a state, we feel almost left out of it. We don't have easy access to education or healthcare. We are forgotten, even though we existed here long before there was a state or a country. We have lived here for thousands of years. Everything has been built around us. But it feels as if nobody cares. That is what this song is about: being left out.”

Ben Khira also told me about "Mazwan" which means “the imagination,” composed by Hosseyn Daggar. “It's about a nomad who is constantly living in his own imagination, because today he is surrounded by the desert and emptiness. ‘Mazwan’ is also about the lingering memory of what this place used to be, a beautiful, fertile land with an abundance of grass, trees and water. It's the ultimate goal of a nomad to come to a place where abundance can be found, and where there is love, as we are all longing for love. This is why we choose the name Ahaney for the album. Ahaney means ‘the vision,’ a vison of love and getting together for the best.”

Tikoubaouine keenly looks forward to performing in the U.S. Ben Khira believes that Americans have “an educated ear,” and will be open to the band’s music, despite the language barrier. “Our message is not just for American or Western people. It’s for the world. Just like you, we all want to have a peaceful life.” This band is indeed a welcome addition to the ranks of modern Tuareg music, a genre that has an undeniable pull on our blues and rock ’n' roll-shaped sensibilities, despite the vast expanses of ocean, desert and culture that separate us from these desert nomads.