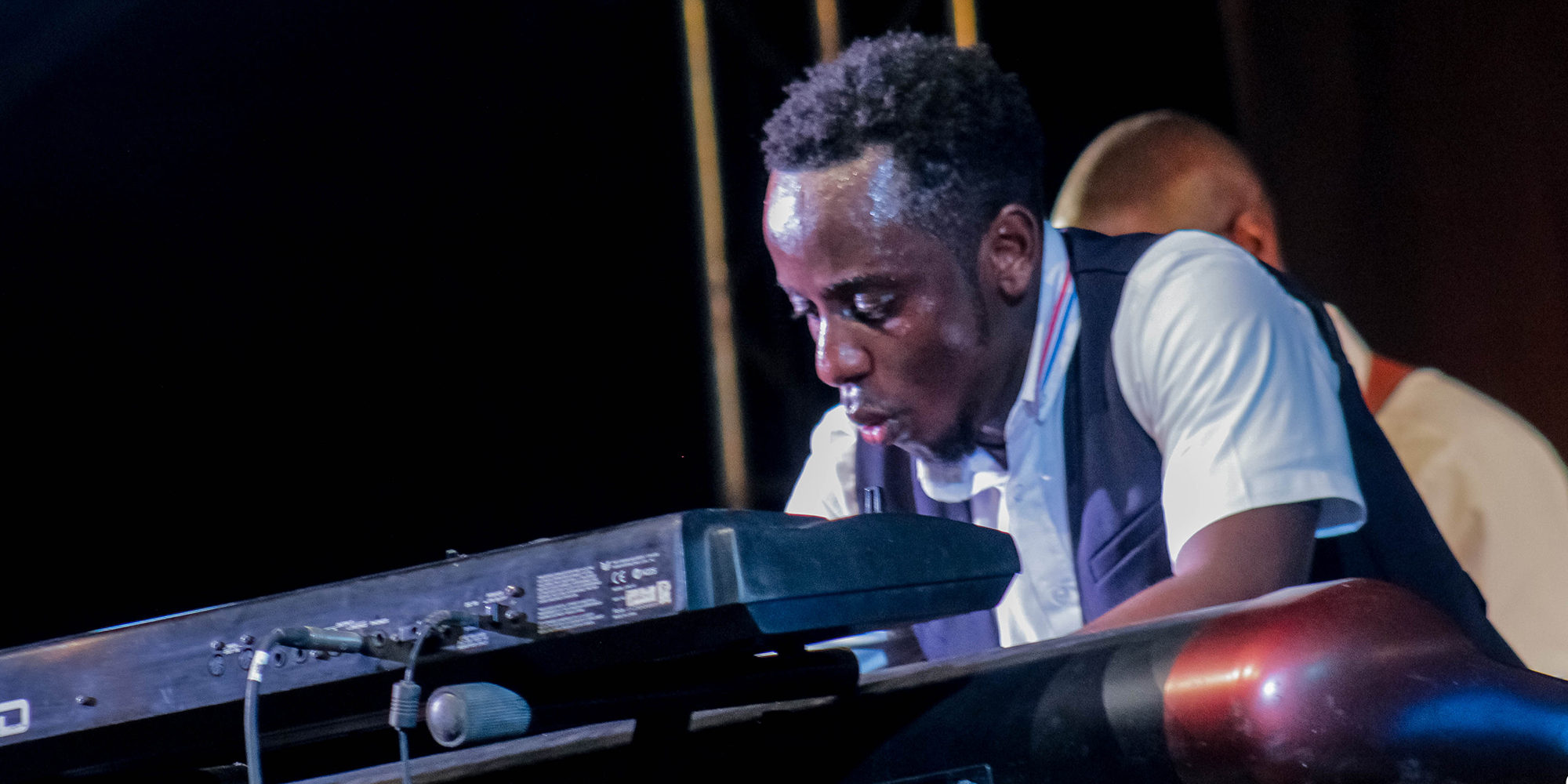 Tyson Meya is a Congolese jazz maestro. In fact, he’s more than that as this interview reveals. Meya came to our attention through Mike Tallman, a partner at Color Red, an independent music label based in Denver, the label that was started by Eddie Roberts from the funky British band New Mastersounds. Originally, the idea was to capture musical collaborations that happen in Denver. But over the last couple of years, Color Red has expanded to include a range of styles. As it happens, Tallman and his own band were tapped for a State Department’s Arts Envoy Program for a 10-day, cultural exchange visit to the Democratic Republic of Congo this past February, just before the pandemic closed down much of the world. The trip began in Kinshasa with workshops and continued on to Goma, where the Americans performed and gave workshops at the Amani Festival. (For more on that, check out the Afropop program Congo-Goma: Music, Conflict and NGOs.)

In Kinshasa, Tallman and his musicians encountered Meya and his group Bokoko Sounds. After the Americans played, Meya’s group played their song “Bokoko,” and Tallman and his crew fell in love. He says this instrumental piece became the theme song of their Congo trip.

Upon return to the States during the ensuing lockdown, Tallman reached out to Meya suggesting they record “Bokoko” as a digital single. Meya agreed, but insisted they also include a song with lyrics and a message, “Kivu.” The musicians recorded in Kinshasa and sent tracks to Denver where Tallman produced them. “Kivu” and “Bokoko” are available on iTunes and can be heard on Soundcloud, Spotify and platforms as well as in this post.

Intrigued by the notion of jazz musicians in Kinshasa, we reached Meya by Zoom. Here’s our conversation, recorded on Oct. 13, 2020.

Banning Eyre: Greetings, Tyson. Am I reaching you in Kinshasa?

Tyson Meya: I am in Kinshasa in the Democratic Republic of Congo and I'm doing well.

Why don't you start by introducing yourself?

I am a musician, composer, pianist, arranger and singer. I've been leading my group which is called Bokoko Music for the past six years. I play African music that leans towards jazz, pop, and also traditional African music. I've been playing piano for 17 years. I'm 30 now.

Did you grow up in Kinshasa?

Yes, I did. I learned music here. I did not study music in school, but I have worked on studying jazz with international musicians like Richard Bona, Etienne M’Bappe and others.

Yes. International musicians have come here to teach master classes. I have been the artistic director for a number of jazz groups, and I'm also the director of a festival called Kinshasa Jazz. In fact, we have an edition planned for next month, the month of November. I've been in charge of selecting the artists, so I am deeply involved in the artistic world here.

I see. And you say you never studied music in school. It was all through interactions with these visiting artists and local musicians.

Exactly. I have worked with a lot of musician friends here. I learned to read music, to compose and arrange. I've been lucky to work with so many musicians. I think it's a gift. I even give master classes for musicians here, but I never studied music in school.

I am familiar with the popular music scene there. I visited Kinshasa twice, once in 1987 and then again in 2001. So I'm familiar with your wonderful dance music, whether you call it rumba, soukous, ndombolo or whatever.

Yes. I've even played that music. But I'm curious about jazz. Is there an audience for jazz there?

Well, that's our biggest problem. Jazz music is not very popular here in Kinshasa. There aren't very many jazz groups, especially ones who have recorded albums that people can listen to. That's our biggest difficulty: recording music. I think the public here is actually open to many kinds of music. But the problem is that jazz groups don't record their songs and don't record albums. So people don't get to know them.

But I think there could be a good audience. When we have our jazz festival, we get big crowds. I think that in the last five years the foreign musicians who have come to the festival have set a good example. Next month when we have our festival at the French Institute of Kinshasa, we will have a big audience. But again, the problem is that our local jazz groups don't record their songs. But people do show up for the big concerts and the master classes. Of course, my group is not strictly jazz jazz. It's a mixture between the music from here with jazz influences. We're trying to open people's ears. 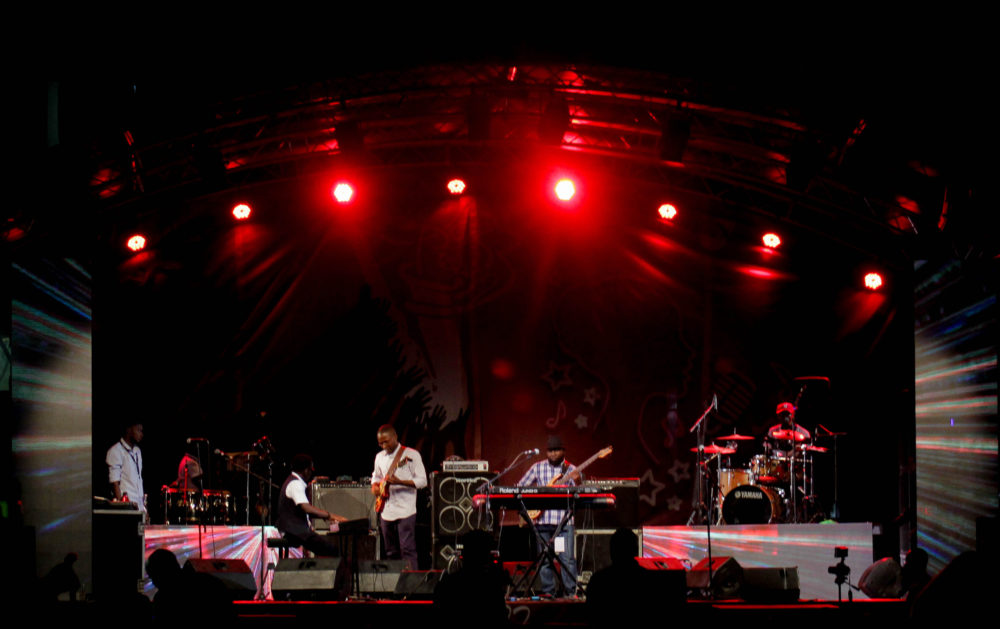 I can hear that in these two songs. But before we get there, I'm curious about your statement that the jazz festival is helping to develop an audience for this music. Are there any radio stations that play jazz?

That's great. So do you feel that the musicians you work with are also committed to creating a local version of jazz, Kinshasa jazz?

Does that give you optimism? Do you think that with time things will improve for jazz musicians there?

Yes. There's a big movement of musicians and journalists who focus on jazz. They promote concerts, publish photographs and so on. There's a lot of energy among the musicians. And with the master classes from musicians that come, I think that in the days to come, all these things will have a greater impact. But again, the most important thing that is lacking is music production. The music is there, the artists are there, and we have a good network. So I do feel that over time we will be more impactful.

I know that the level of musicianship there is very high. Just looking at the popular music, even the guitar players. I play guitar, and I very much admire the skill and sophistication of Congolese guitarists. I wonder if the musicians you work with also work that side of the street. I imagine there are musicians who play in popular dance bands but also play jazz on the side.

Absolutely. I think that among the musicians, jazz is one of the most influential musics now. A lot of musicians who play ndombolo and rumba are into jazz. They feel connected to an international network that influences their tastes. They bring those influences into Congolese music. Whether they’re guitarists or percussionists or drummers, they are always finding ways to mix ndombolo and jazz. You can hear it in their arrangements.

You spoke about the problem of production. I understand that with these two songs you recorded the tracks there and sent them to Mike Tallman to do the final production, right?

Yes. We recorded my songs here in Kinshasa in our studio. We have professional studios here. We have great musicians here and very good studios. The problem is production. We sent those two songs to Mike and he worked very quickly. Within two weeks they were finished and it was a very professional job. 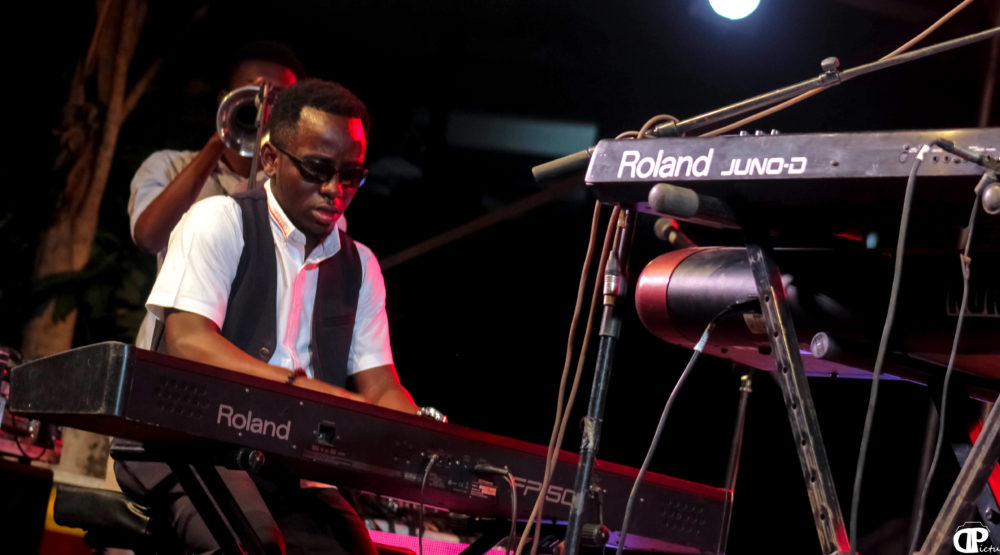 So let's talk about those two songs. Tell me about them.

I will start with “Bokoko.” “Bokoko” is the first song that Mike and his friends heard in Kinshasa. They were here for a cultural exchange on their way to the Amani Festival. I have worked before with the American embassy here, so they called me for this cultural exchange. So Mike and his musicians played, and afterwards we asked if we could play this song for them. It's a song that I wrote four years ago in 2016. So we got on the stage and played the song, and it was very nice, because Mike and his friends really liked the song. They played along with us.

The song is based in traditional percussion, but I have given it a jazzy arrangement with horns on top. So the idea was to mix two emotions, the emotion of pain and sadness and the emotion of celebration and dance. This mix of emotions is something I find a lot in our African traditional music. Because our ancestors experienced a lot of difficulties in the years of slavery and colonialism. But they remained strong despite the pain and suffering. Even as they cried, they celebrated and danced. Music is the way they forgot their troubles.

When you say that the song is based in traditional percussion, is that the percussion of a particular ethnic group, or just generally Congolese?

The tradition that I was drawing on is Pende.

I know that there are a huge number of traditions in Congo.

Yes. We have over 400 ethnic groups. So many traditions, many languages. We are very strong in that way.

When we talked about recording “Bokoko,” it was very important for me to also have a song with words and a message, because “Bokoko” is instrumental. This song has an important message about the troubles in the east, the massacres and people that have been killed by militias. So many people have been lost, and young people are very sad about the situation. People don't know if their brother or sister will be next to die. So this is a very serious situation that has gone on for a long time. Millions of people have died. So we wanted to tell the story through music to give hope and courage to those who have lost family members. It's a message of peace, hope and reconciliation among the ethnic groups there. We wanted to give courage to people who face these attacks by armed groups. So that is the idea behind “Kivu.”

I am also a singer, but on this song I wanted to include the voice of a woman. This was very important to me to communicate this sadness with a woman's voice. Miolango Lady E is someone who I have worked with a lot. So it's her voice that delivers the message to young people, and to people around the world who hear this music, that they must be strong.

Because women have suffered especially during this time of war. Probably more than anyone. Tell me, did you also travel to Goma for the Amani Festival?

No, I didn't go to the festival this time. But I did go there in 2010 and 2011. I had a tour there. It came out of a musical competition here. We went to Goma, Bukavu, in other places. That's where I came to understand and really be touched by the suffering there. It is very rich and very beautiful there. If only there were peace.

It's almost like another country there compared with Kinshasa, isn't it?

Yes. It is very different. 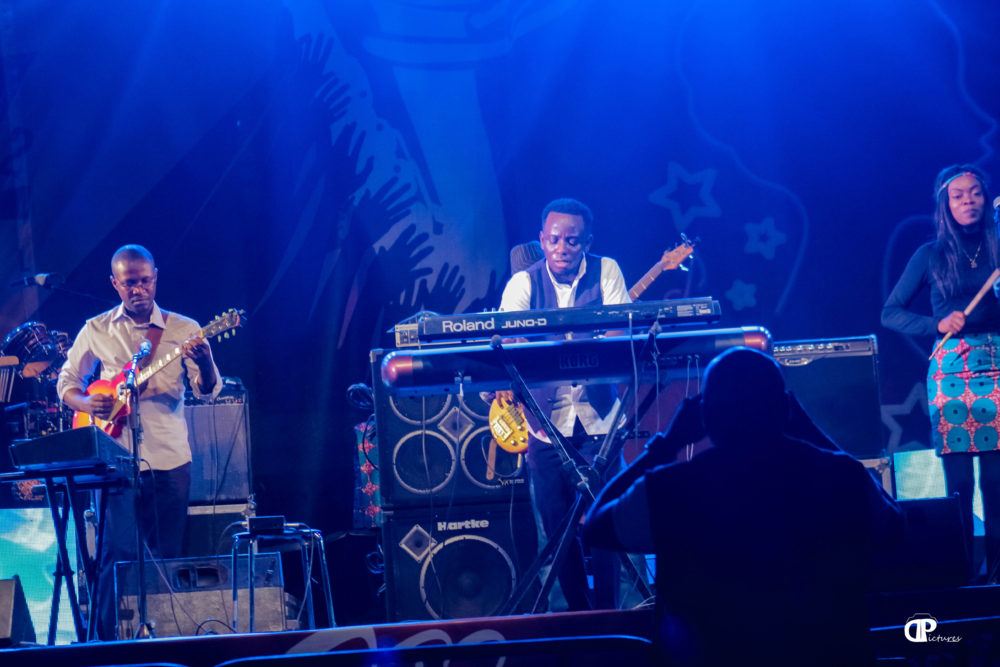 Well, it's very good to meet you. I've spent a lot of time traveling in Africa, but Kinshasa was the first place I visited, so it's very special to me. The music scene there is amazing, and I very much respect your efforts to develop jazz there. It's interesting. Jazz is a music that has deep roots in Africa, but it isn't all that popular in most African places. I think there are a lot of possibilities there to develop audiences.

Well, we wish you good luck with all you’re doing. And we will stay in touch. Thank you for speaking with me, and thanks for the music.